BEIJING -- Doubling the size of China's economy and income per capita by 2035 is "completely possible," President Xi Jinping said in a speech made public Tuesday explaining the ruling Communist Party's new five- and 15-year economic goals.

The proposals for China's 2021-25 economic plan and long-term targets for 2035 -- decided at last week's plenary session of the party's Central Committee -- were reported by the official Xinhua News Agency, as was Xi's speech.

China can meet the threshold for becoming a high-income country in the next five years, Xi said. But the proposals made no mention of specific growth rate targets, instead focusing on qualitative expressions.

By comparison, the president's November 2015 explanation of the proposal for the 2016-20 plan noted that gross domestic product would need to rise by 6.5% a year on average.

The lack of numerical targets owes to the uncertainty created by factors including the coronavirus pandemic and the slumping global economy. Xi indicated that specific goals will be included in the outline to be passed by China's legislature, the National People's Congress, when it meets in March.

The U.S. Congressional Budget Office projects American GDP to reach $31 trillion in 2030. Assuming a constant yuan-dollar exchange rate, China's GDP would be nearly 80% that of the U.S. in 2030 and could surpass it in the mid-2030s. 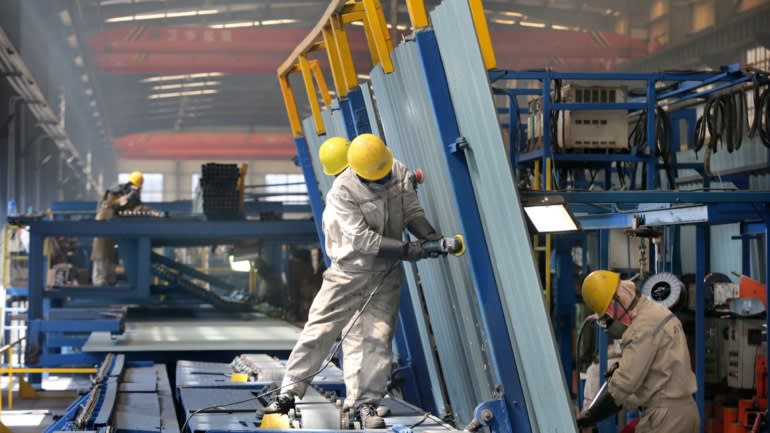 The five-year plan includes industrial policies aimed at strengthening China's position in its battle with the U.S. for tech dominance. It positions fields such as semiconductors and artificial intelligence as strategically significant, and calls for establishing self-reliant supply chains.

The latter goal appears to be primarily a response to Washington's string of sanctions against Chinese companies under President Donald Trump. A new key phrase refers to "autonomous and controllable" supply chain designs.

"That means that they won't be affected even if hit with U.S. sanctions," a senior Chinese government official explained.

China has used talent educated abroad, including in the U.S., to foster industry at home. But with overseas research opportunities for Chinese under pressure as tensions between Beijing and Washington escalate, the proposal stresses "self-reliance and self-improvement" in science and technology. It urges tax breaks and other support for basic research, an area where China lags.

Emerging fields singled out for development include information technology, biotechnology, new energy sources and materials as well as so-called new-energy vehicles such as electrics. The Chinese plan also envisions "deep integration" of the internet, big data and AI into various industries.

The proposal's section on Hong Kong calls for "adhering to the rule of law" and "preventing external forces from interfering" in the territory's affairs.