Growth rate eases to 6.8% but gets support from infrastructure, personal spending

BEIJING/TOKYO -- China's economy expanded at a slightly slower pace in the July-to-September period, but is still well ahead of its official target. The figure is seen as an endorsement of President Xi Jinping's economic policies as he readies to begin a second five-year term.

The government released its growth figure on Thursday, the day after the Communist Party began its twice-a-decade congress, which Xi is expected to use to solidify his power, laying the groundwork for an extended stay as leader of the country. 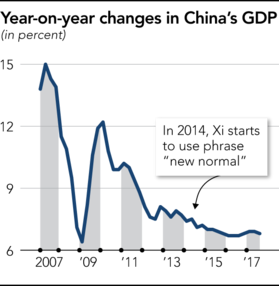 China's gross domestic product -- the broadest measure of economic activity -- grew 6.8% in inflation-adjusted real terms from a year ago, compared with the 6.9% pace in the first two quarters of the year.

Although easing slightly, the pace of expansion is still robust, driven largely by infrastructure spending and personal consumption.

For the first nine months of the year, growth hit 6.9%, suggesting that Xi's government will easily meet its full-year target of 6.5% for 2017, and could even eclipse last year's rate of 6.7%.

This would mark the first time in seven years that China's annual growth rate topped the pace of the preceding year, and would highlight the importance Xi attaches to maintaining rapid growth as justification for his stay in power.

The rate also exceeded the 6.7% expected by analysts surveyed by Nikkei and Quick, reflecting caution over Beijing's moves to defuse property bubbles and contain risks from mounting private debt.

But the rapid growth received help from the government, which boosted public investment through infrastructure projects and other means to fuel the economy.

That contrasted with a more measured pace of investment by the private sector amid rising interest rates. Data showed that growth in fixed-asset investments slowed to 7.5% in the January-to-September period from 8.6% in January-June.

As part of his "socialism with Chinese characteristics" agenda, the president expressed hopes to "deepen reform of state-owned enterprises, develop a mixed-ownership economy and cultivate globally competitive world-class firms."

Xi faces a difficult balancing act of maintaining robust growth while keeping the economy from overheating in order to steer the country toward more sustainable long-term growth.

"Houses are built to be inhabited, not for speculation," Xi said in his address at the congress on Wednesday, reiterating efforts to maintain a stable housing market.

But analysts are not sure whether the property market will behave as he wants. "The housing market is cooling at an orderly pace, but activity there remains buoyant," said Alaistair Chan, economist at Moody's Economy.com.

Xi is also trying to reduce pollution, even at the expense of hurting industrial activity. Data showed that growth in industrial output eased slightly to 6.7% in January-September from 6.9% in January-June.

Driving the economy was private retail spending, which recorded year-on-year growth of 10.4% in January-September on the back of robust demand for cosmetics, drugs and furniture.

Analysts predict that growth is likely to diminish in the coming quarters. "A less supportive fiscal policy stance and slower credit growth should result in a slowdown over the coming months," said Julian Evans-Pritchard, economist at Capital Economics.