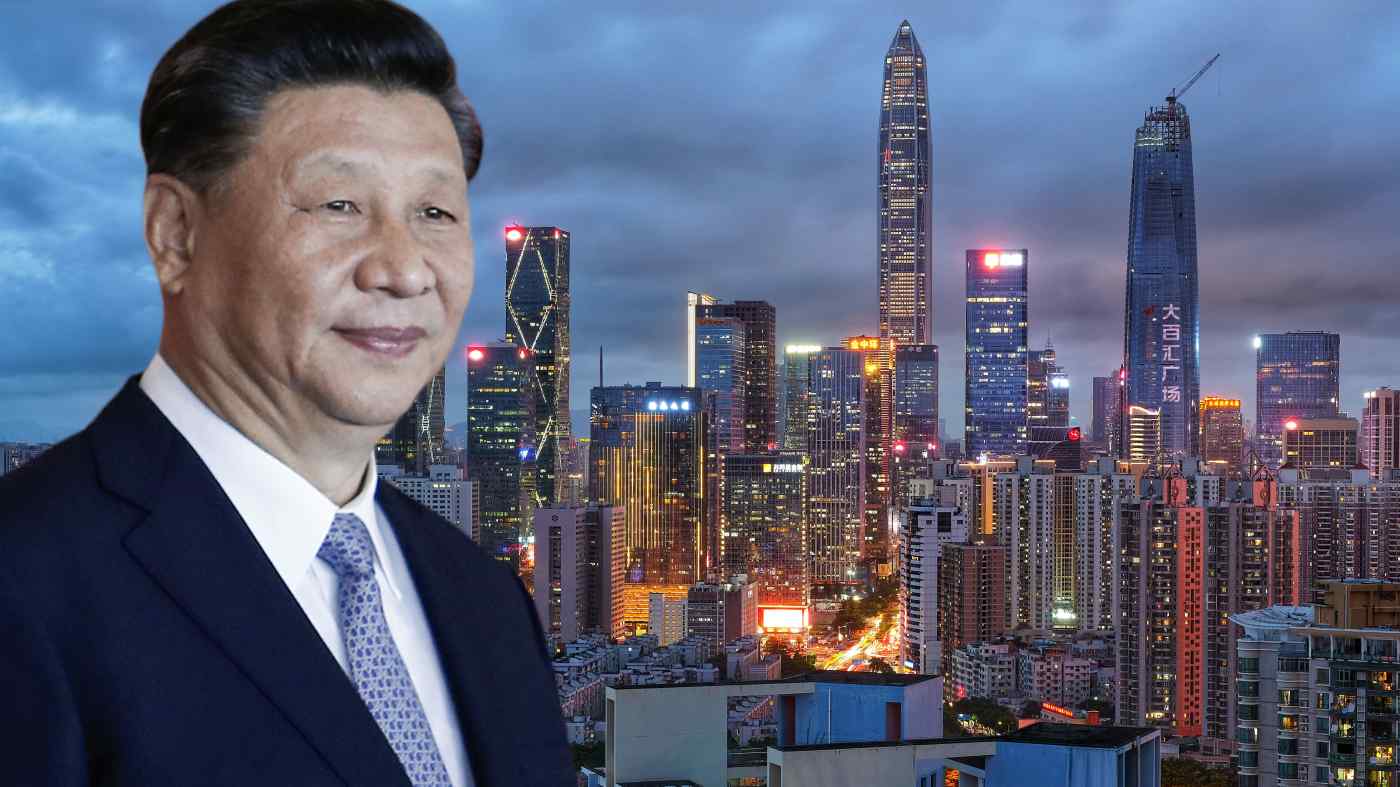 SHANGHAI/HONG KONG -- China has unveiled a long-term plan for Shenzhen ahead of President Xi Jinping's visit on Wednesday for the celebration of Shenzhen Special Economic Zone's 40th anniversary.

Touted as the country's symbol of reform and market liberalization, the government is proposing to turn Shenzhen into a hub of innovation that will draw entrepreneurs. It hopes the area will benefit from "international influence" based on socialist principles, according to Xinhua.

The attention that Shenzhen is receiving has raised questions about the future role of Hong Kong, its close neighbor that has been embroiled in political turbulence over the past year. Will Hong Kong continue to be the financial and trading hub of Asia in the future?

Shenzhen is also a symbol of Beijing's ambition and driver to becoming a world leader in technology and the internet economy, amid escalating tensions with the U.S.

Where exactly is Shenzhen?

Home to a population of 13 million, Shenzhen shares a border with Hong Kong. Under the instruction of then leader Deng Xiaoping, Shenzhen began its transformation in 1979 from a fishing village to the modern city it is today. It achieved gross domestic product of $396 billion in 2019, surpassing Hong Kong's $366 billion.

Shenzhen is part of the Greater Bay Area of Guangdong, Hong Kong and Macao. This area is one of Beijing's key engines for economic growth.

Xi's father Xi Zhongxun was a leader entrusted by Deng to oversee the development of Guangdong province, which encompasses Shenzhen.

Chinese technology companies including Huawei Technologies, Tencent Holdings and BYD Auto are based there.

As a special economic zone, Shenzhen will be given more autonomy, allowing city administrators to change farm land to commercial titles. Such a move is aimed at expanding the land bank for development, housing needs and to fund the city government.

"The pilot [plan] on land reform may help solve the land supply issue for tier-one cities, curb rapid property price appreciation, and set an example for the rural land reform for the rest of the country," Citi Research said in a Monday report.

Beijing has set 2025 as the target for Shenzhen to achieve the necessary reforms, and for the city to assume a bigger role as a beacon for the rest of the country. "Shenzhen will strive to become a national model of high-quality development, as well as a hub of innovation, entrepreneurship and creativity with international influence by 2035," according to Xinhua.

As the largest source of external capital to Shenzhen, Hong Kong's government said it has been both a "contributor and beneficiary" of its neighbor.

Citi Research in its report wrote that as Shenzhen's competitiveness improves with state-backing and reforms, Hong Kong will come under increasing pressure.

"The series of policies to encourage technology innovation, attract foreign and domestic talents, and accelerate the financial openness will also help build Shenzhen not only as a global technology center but also an international financial center, amid the risk of U.S.-China technology and financial decoupling," the report said.

To draw foreign investment in the high-tech industry, the government will experiment with new intellectual property rights protection, including implementing a compensation system for infringements, among other legislative measures it is exploring.

With its aim to internationalize the yuan, Beijing hopes foreign institutions will be encouraged to set up securities and fund management entities in Shenzhen. But to this end, the government has yet to unveil any incentives. The government will, however, help foreign talent obtain permanent residency.

Last week, China's central bank distributed 10 million yuan ($1.5 million) in digital currency to Shenzhen residents through a lottery in a move toward forming a cashless society. Unlike bitcoin, China's digital yuan is regulated by the government.

In the lottery, 50,000 units of digital currency was valued at 200 yuan. Residents can use the currency within a limited period at over 3,000 retail outlets in Shenzhen's Luohu district, according to state news agency Xinhua.

Before the lottery in Shenzhen, Beijing had already rolled out trials in other cities to test payments for utility bills, government services and transportation. By August, over 3 million transactions involving 1.1 billion digital yuan had gone through the system, which was operated by the Big Four state banks -- Industrial and Commercial Bank of China, Agricultural Bank of China, Bank of China and China Construction Bank.