Young Taiwanese uproot to Southeast Asia for pay and prospects "I would never have had the same kind of opportunity if I'd stayed in Taiwan or gone to work in China," Su, 31, told the Nikkei Asian Review. He recently returned to the island for family reasons, but said he would have preferred to stay in Vietnam.

Zoe Wu, a former colleague of Su at Dean Shoes, said she moved to work at the footwear maker in Vietnam after realizing she was not able to save any money as a trade assistant at a souvenir company in Taipei.

Her employer not only offers daily meals, accommodation, cleaning and laundry services, but also provides seven free round-trips to Taiwan a year and 55-days of paid leave. Wu, 29, said it was easy to save more than half her salary due to the low living costs.

"I earn twice what I could get in Taiwan," said Wu, who leads a team helping the likes of Nike, Asics and New Balance develop new footwear. "It's very easy for people to save up to $30,000 in two or three years here. That's something I could never imagine if I just stayed in Taipei."

Many of the more than 110,000 Taiwanese like Su and Wu working in Southeast Asia say they have higher salaries and better promotion prospects than their peers back home.

In the past, they may have gone to work in China, but rising labor costs -- and now rising trade tensions -- are prompting Taiwanese companies to shift production to places such as Vietnam and India. While the government in Taipei welcomes the exodus of talent, saying it helps young Taiwanese gain skills, lawmakers are discussing whether to offer citizenship to more students and skilled workers from Southeast Asia to boost the island's shrinking labor force.

"The government should be worried that there is less talent coming the other way from Southeast Asian countries," said Gordon Sun, director of the macroeconomic forecasting center at the Taiwan Institute of Economic Research. "This is causing a brain drain." And jobs in Taiwan are getting sparser. The youth unemployment rate has exceeded 10% for nine straight years, with the ratio for people aged 20 to 24 standing at 12.8% in August -- compared with 3.9% across the board.

Economies such as Vietnam and India are growing at around 7% a year and may become even more attractive destinations for young people in Taiwan, which expanded just 2.8% last year.

The number of Taiwanese aged between 25 and 29 heading to work in Southeast Asia jumped 62% in the three years to 2017, according to data from 104 Job Bank, Taiwan's leading online recruitment agency. The number of people applying for vacancies in the region rose 33% to 53,137.

The escalating trade war between Washington and Beijing is also prompting Taiwanese companies to shift production away from China.

"We are seeing a clear trend of both companies and workers flowing to Southeast Asia and India this year," said Karen Ma, a researcher at Hsinchu-based Industrial Technology Research Institute. "The business environment is deteriorating in China, and the trade war provides fresh incentives for talent and companies to quickly expand to new locations beyond China."

Outbound investment from Taiwan to Southeast Asia and India rose 54% from a year earlier to $3.68 billion in 2017, according to Taiwan's Trade Negotiation Office. For China, the figure fell 4.8% on the year -- a second straight annual drop -- to $8.74 billion. 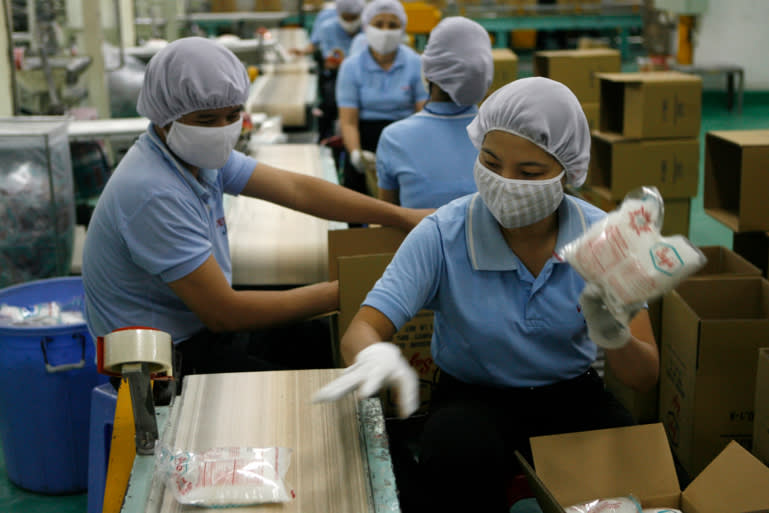 In addition to footwear suppliers like Eclat Textile, Pou Chen and Feng Tay shifting a chunk of manufacturing to Southeast Asia, key tech companies such as Advantech -- the world's largest industrial PC maker by market share -- and major Apple suppliers including Hon Hai Precision Industry and Pegatron are all moving some production to the region. Many also see huge demand potential in these countries.

"We've been seeing more and more Taiwanese companies and young Taiwanese come to Vietnam over the years," said Michael Hsieh, chief strategy officer of food company Vedan International Holding, one of the earliest Taiwanese investors in Vietnam. "It's a massive market in itself."

While lawmakers debate a bill to make it easier for skilled Southeast Asian workers to get permanent residency in Taiwan, the government of President Tsai Ing-wen says it welcomes the outflow of talent.

Ties between Beijing and Taipei have deteriorated since Tsai's Democratic Progressive Party took office in 2016. Her administration has been pushing its "New Southbound Policy" to encourage companies to develop deeper ties with Southeast Asia and reduce the island's reliance on China, its biggest trade partner.

"We don't see the outflow of young talent to Southeast Asian partners as a bad thing to Taiwan," John Deng, an executive minister without portfolio, told Nikkei in an interview. "In fact, this growing trend paves the way for more and more business and cultural exchanges with Southeast Asian countries."

"These young Taiwanese accumulating overseas experience and connections in the region will bring back key competitiveness to Taiwan in the long term," said Deng, who also serves as the head of Taiwan's Office of Trade Negotiations. "The government will do whatever it can to help Taiwanese companies relocate from China to Taiwan if necessary. We can also help those companies should they hope to go to invest in Southeast Asian countries."

Sun, the economist at the Taiwan Institute of Economic Research, said the government should also take steps to attract talent from Southeast Asia. Moves, he said, could include the changing of laws to allow college students to stay and work in Taiwan. But most of all, the shift to Southeast Asia seems to be boosting the long-term prospects of the young people moving there.

"Several of our managers for these emerging markets are under 30," Mike Yang, general manager of Advantech's emerging markets business, told Nikkei. "It's really a great place that is growing rapidly and it's definitely better than working in some mature markets where you are only a cog in a big machine."

Wu, the 29-year-old team leader at the footwear company, said she was thrown in at the deep end on her first day working in Vietnam.

"All of us were asked to be a leader to handle various tasks at the very beginning," she said. "It's stressful, but it also makes you grow quicker and become more competitive."