Zero-interest lending is lesser of two evils for Japan's banks TOKYO -- Japanese banks are jumping at opportunities to extend even interest-free loans, just to avoid taking the hit from negative interest rates on deposits at the central bank.

The money is going to government entities and affiliated borrowers, which are fielding record loan offers as banks rush to put available funds to use.

At one bank, a staffer in charge of lending to the government conceded there is no longer any wiggle room when it comes to setting rates. "In the old days, this was where I would strut my stuff, setting rates," the employee said.

Nearly every week, the Finance Ministry holds an auction to borrow funds under a special account. Banks tender bids, and each auction typically closes with 1.05 trillion yen ($9.56 billion) in borrowing. But as of mid-June, the total loans on offer were reaching around 15 trillion yen each time -- a record level roughly 14 times the amount actually borrowed.

Banks are backing up the truck even though successful bids have been fetching 0% interest since November, when the ministry cut the lower limit from 0.001% to 0%.

The ministry lowered the floor because it "expected banks would now be ready to tender bids even at a rate of zero," an official said. This was after the Bank of Japan instituted its negative-rate policy in early 2016. 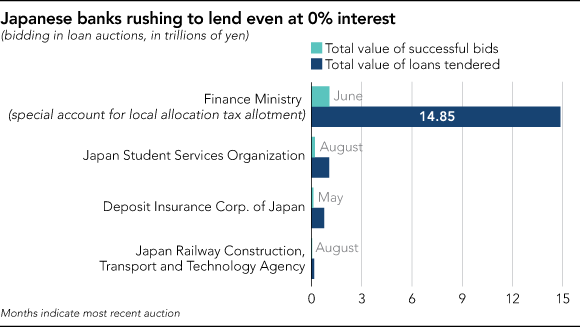 The ministry was dead on: The total amounts being tendered have risen to five times the levels seen three years ago, when 0.1% was the highest rate on successful bids.

State-affiliated borrowers, too, are taking advantage of the environment created by the BOJ policy.

Since May of last year, the average rate on successful bids in loan auctions held by Deposit Insurance Corp. of Japan has been 0%. The Japan Student Services Organization's auction for fiscal 2016, held after the introduction of negative rates, also resulted in interest-free borrowing.

A bank insider said regional financial institutions are participating in these zero-rate auctions because they simply want to park their funds in safety, now that they are being charged for deposits in BOJ accounts.

The central bank used to be their go-to option, since it was risk-free and even offered positive interest -- albeit minimum rates.

That changed in February 2016, when the BOJ imposed negative rates on some current accounts. Since this was a radical step, the central bank also introduced a cushion, allowing banks that meet certain requirements to still deposit at a rate of 0%. But in the past year and a half, banks have used this cushion so much that they will soon have to accept negative rates on additional deposits.

Recent moves by Mizuho Financial Group highlight the strain banks are feeling. In the April-June period, the megabank reduced its BOJ deposits by 5.3 trillion yen and increased purchases of Japanese government bonds by the same amount. Although rates on short-term bonds are also negative, they are still better than the rates on BOJ accounts.

All these efforts are only helping financial institutions manage the pain. Net business profit is falling sharply. At the country's three megabanks -- Mitsubishi UFJ Financial Group, Sumitomo Mitsui Financial Group and Mizuho -- it was down 12% for the fiscal year that ended in March.

Insiders say the current fiscal year could bring an even steeper fall.