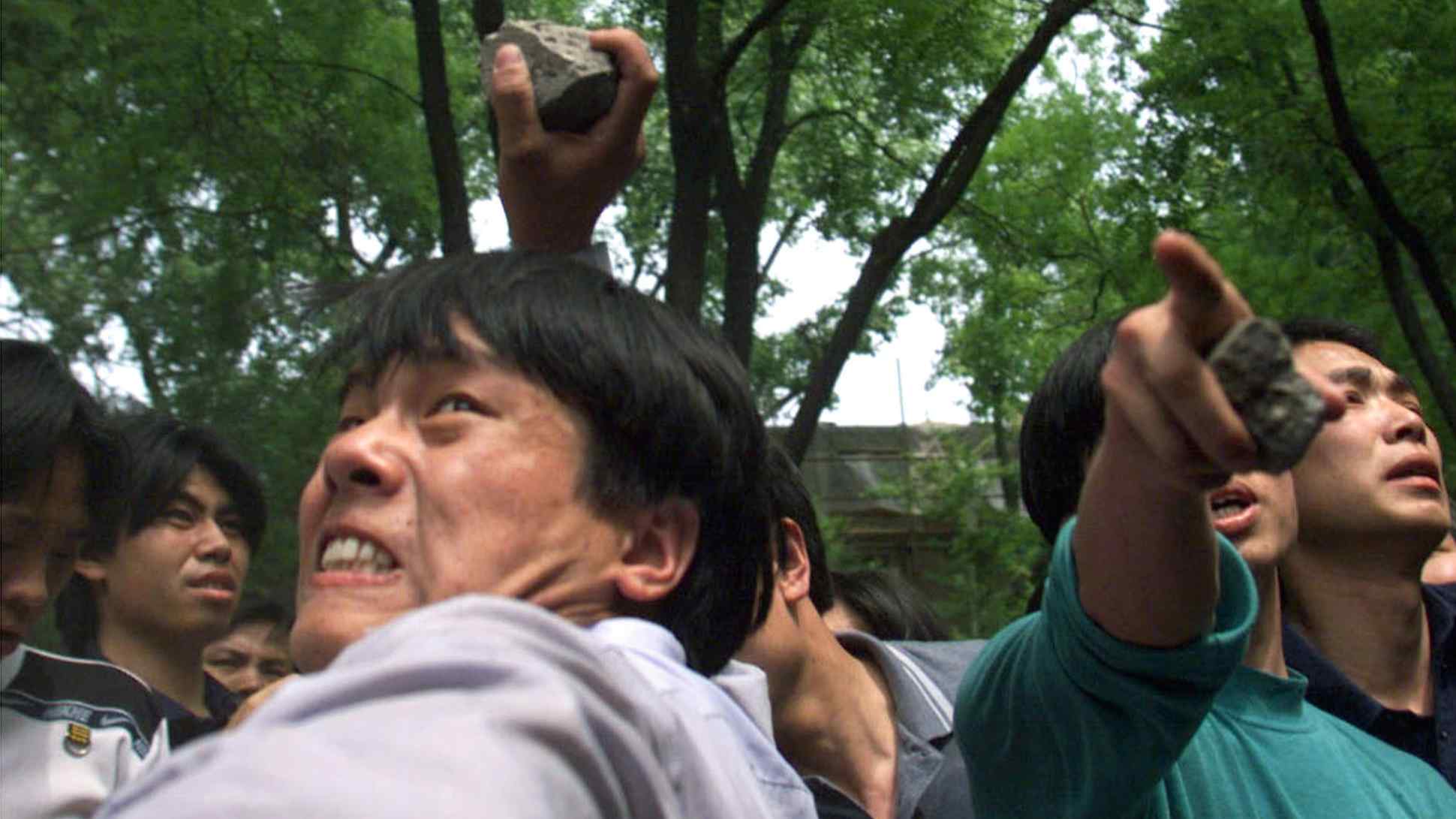 Chinese demonstrators hurl stones at the U.S. Embassy in Beijing on May 9, 1999, angered by the U.S. bombing of the Chinese Embassy in Belgrade during the Kosovo War, which Washington called a mistake.   © Reuters
China up close

A generation of former student protesters determined to be world No. 1

TOKYO -- In a scene that evoked memories of Beijing's landscape as it was 19 years ago, a man from Inner Mongolia last week set off an explosive device, believed to be homemade, near the U.S. embassy in the Chinese capital.

The incident took place on the afternoon of July 26, with the U.S. and China engaged in a trade war. Details regarding the explosion remain unclear. Footage of the scene shows smoke rising from the vicinity of the embassy and a chaotic aftermath.

In May 1999, during North Atlantic Treaty Organization airstrikes over Kosovo, in the former Yugoslavia, a U.S. military plane bombed the Chinese embassy in Belgrade, killing three Chinese. The U.S. said it had mistakenly targeted the site.

Tens of thousands of angry Chinese gathered in front of the U.S. embassy in Beijing to protest. They threw everything from eggs and stones to plastic bottles of paint at the diplomatic compound, which has since been moved to a new location.

The U.S. embassy flew a flag at half-mast to express its condolences for the three victims. But that did little to quiet the angry mobs defacing the embassy with red, black, yellow and green paint.

Some protesters also lobbed petrol bombs that would burst into flames. Windows of the U.S. embassy were smashed, then boarded up with plywood. Students from Tsinghua University, current Chinese President Xi Jinping’s alma mater, joined the massive demonstrations in front of the U.S. embassy in Beijing in May 1999.

The U.S. embassy was in a shambles. Jim Sasser, the ambassador, had no choice but to barricade himself inside the embassy for his own safety.

Embarrassed by the siege, then-U. S. President Bill Clinton tried to call his Chinese counterpart, Jiang Zemin, to apologize. But Jiang refused to answer the phone.

Angry citizens from across China flocked to the embassy and other U.S. consulates. If Jiang had prematurely struck a deal with Clinton, it could have added fuel to the unrest.

China has a history of student activism. In 1919, the May Fourth Movement played out at Peking University. Tsinghua University is Chinese President Xi Jinping's alma mater. During the 1999 protests several tens of busloads of students, including those from Peking and Tsinghua universities, were mobilized and sent to the U.S. embassy.

"The U.S. should not underestimate China," banners proclaimed. "We will become strong," the students vowed. Chinese student protesters who in 1999 gathered in front of the U.S. embassy in Beijing brought prophetic signs and banners with slogans like the U.S. can’t "underestimate China."

The streets in Beijing were awash with young people talking about their dream of seeing China become the world's No. 1 country.

For foreign nationals living in Beijing at the time, the slogan, "The U.S. should not underestimate China," was puzzling. It was clear that the U.S. had not fired missiles at the Chinese embassy in Belgrade on purpose, or at least not to mock China.

It remains important to try to understand how the Chinese students felt at the time, especially since this generation forms the core of Chinese society today.

A month or so after the demonstrations, a person in charge of Peking University's student body told the Nikkei that the banner slogans were chosen because they "expressed emotions that came out quite naturally."

After the bombing of the Chinese embassy, the U.S. military announced that it had been an accident. But it was difficult to find any student or citizen who said they believed the U.S. account.

Instead, they felt the bombing was deliberate and that it had happened because China was weak. The rocks and paint hurled at the U.S. embassy symbolized their frustration.

The undercurrent was the "trauma of history," a sense of guilt toward what Chinese regard as a humiliating period of China's otherwise glorious history.

For several millennia, China was the world's greatest power. But for around 100 years beginning in the mid-19th century, China lost its footing and became vulnerable to foreign invaders.

One intellectual in Beijing voiced a popular sentiment 19 years ago: "China embarked on reform and opening-up, and has already achieved economic growth to some extent and should no longer be a global dropout. Still, the U.S. intentionally bombed us, just to see how far we would plunge into confusion. Jiang Zemin, who 11 years earlier had brought the country into the WTO, attends the Chinese Communist Party’s national congress in 2012.

"The U.S. would never do such a thing against developed countries. The U.S. still despises us."

What, then, was the solution? What could China do to gain respect? The answer was to become a power equal to the U.S.

But for that, China first needed to become an economic force.

In 1999, Japan was the world's second-largest economy, after the U.S. China's economic size was less than a quarter of Japan's. China's dream of overtaking the U.S. was still pie in the sky.

The gap between the U.S. and China was so wide even the young Chinese protesters felt that their country becoming the world's No. 1 was but a pipe dream.

Yet, the wheels started moving. Around that time, the biggest topic of conversation in China was the country's admission to the World Trade Organization.

For the young acting governor of Fujian Province, Xi Jinping, this was also a topic of keen interest.

In September 1999, Xi gave an interview to foreign journalists in Fuzhou, the provincial capital. It had been four months since the U.S. embassy in Beijing was beset by angry students.

The interview focused on China's WTO accession, a delicate issue.

During the interview, Xi spoke at length about the pros and cons of joining the WTO, eventually saying the final decision would be made in Beijing by Chinese Communist Party officials in government.

China decided to join the WTO at the end of 2001, only two and a half years after the anti-U. S. protests. In 1999, Chinese diplomatic sources said it would take at least 20 years to repair Sino-U.S. relations. But with China's WTO accession, they quickly changed their attitude.

China has used the WTO to move closer to its dream of becoming the world's No. 1 country.

But Chinese remain convinced that they are victims and their country is "still despised." Those who refused to believe the U.S. account of the 1999 bombing remain stubbornly bitter toward the U.S.

Today, U.S. President Donald Trump has set his sights on China over trade. The tensions of today could reignite the raw, delicate anti-U.S. sentiment many Chinese feel.

Fresh from his return from a long overseas trip, Xi will have to pay close attention to prevent last week's small blast in front of the U.S. embassy in Beijing from causing a chain reaction.

Furthermore, this antipathy will continue for a long time.

The dream of becoming the world's No. 1 country, which was talked about by many young Chinese protesters 19 years ago, is close to reality. It began with China's induction into the WTO and now has the U.S. president alarmed.

The "Chinese dream" of overtaking the U.S., an integral element of "Xi Jinping's new era," is intricate. It will drastically change the structure of a world that may not be ready for the repercussions.