All the President's men: Xi's allies dominate US talks

TOKYO -- All eyes will be on Washington as ministerial-level trade negotiations between the U.S. and China resume on Thursday ahead of a looming March 1 deadline.

The trade talks come as the Chinese economy enters a crisis, with new car sales tumbling as much as 15% in January from a year earlier. The Chinese delegation's mission is to defuse the crisis.

Reflecting how much is at stake, President Xi Jinping will command the Chinese delegation directly in his capacity as head of the Communist Party and his tight grip over the process is clear in other ways.

Beijing's team at the Washington trade negotiations will be led by a close Xi ally, Vice Premier Liu He, rather than by Premier Li Keqiang. It will also include a younger generation of Xi aides, among them Vice Finance Minister Liao Min, 50, and Vice Minister of Agriculture and Rural Affairs Han Jun, 55.

Liao and Han both serve as deputy directors of the key Communist Party economic commission's general office under Liu. They have greater power to negotiate with the U.S. than their ministries' top officials, as they receive instructions directly from Xi and Liu.

Among other Xi allies in the Chinese negotiating team is Commerce Minister Zhong Shan, who has been Xi's subordinate since the Chinese president was still serving as Zhejiang province's top official. 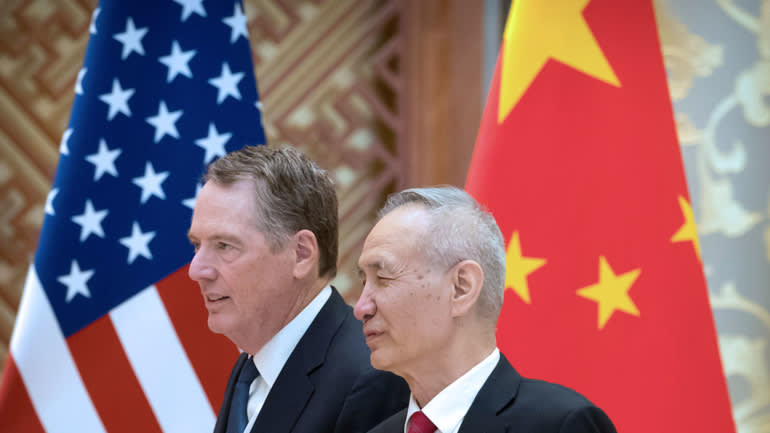 U.S. Trade Representative Robert Lighthizer, left, and Chinese Vice Premier Liu He arrive for a group photo at the Diaoyutai State Guesthouse in Beijing on Feb. 15. Xi has known Liu since his teenage years.    © Reuters

The faces missing from the table, meanwhile, include Premier Li, a position that usually presides over economic affairs, including trade policy. Also absent are Wang Yang, the party's fourth-ranking official who previously presided over the Sino-U. S. talks, and Hu Chunhua, who ranks higher than Liu He as vice premier.

All three hail from the Communist Youth League and personnel close to the Communist Party's massive youth organization have been largely excluded from the Chinese negotiating team.

This shows how the Chinese premier's powers are narrowing in the name of integrating the party and the government. Another indication: Li's remarks in Chinese media recently focused on health issues such as early treatment of cancer, rather than the economy.

The reality is that Xi has gradually seized the initiative in economic policy from Li. This political battle was rumored to be a feud between the southern and northern parts of Beijing's Zhongnanhai area, China's political nerve center where the country's leaders are based.

After assuming the post of premier, Li spearheaded China's new economic policies, which were dubbed "Likonomics" amid high expectations. But the new word faded quickly.

Instead, the term "new normal" appeared, meaning not pursuing continued high growth. The word "Xiconomics," referring to economic policies in Xi's "new era," was also used by some.

In 2016, an article by an anonymous "authoritative figure" was published on the front page of the People's Daily, the mouthpiece of the Communist Party. 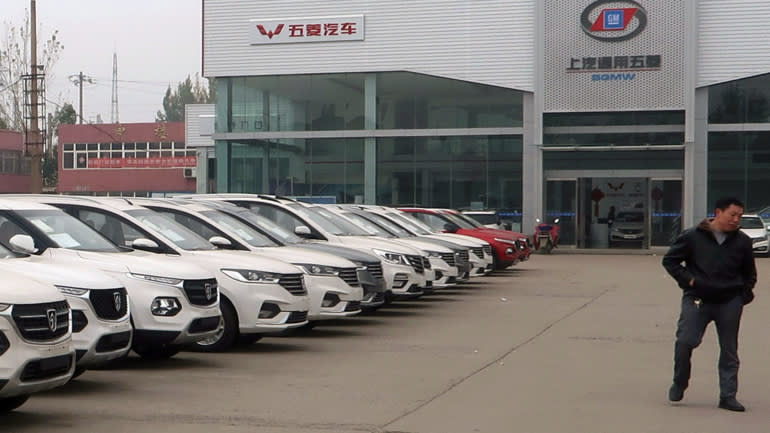 Dealers and customers are seen at a dealership in Pingdingshan, Henan province. New car sales have tumbled as much as 15% in January from a year earlier.    © Reuters

The article stressed the importance of structural reforms and said that a "U-shaped" or "V-shaped" economic recovery engineered via a massive amount of infrastructure investment was impossible. It was also a criticism of the economic stimulus measures taken by the Li-led government.

The anonymous author was said to be Xi's ally Liu.

Behind the death of the word "Likonomics" was the Xi camp's jealousy of the great deal of attention Premier Li had attracted from the outside world for his economic policies, according to some observers.

A similar thing happened 20 years ago. Two decades ago, Premier Zhu Rongji, a strong reformist who commanded negotiations on China's accession to the World Trade Organization, drew global attention for his deft handling of the economy.

Then Chinese President Jiang Zemin is said to have became jealous of Zhu. In order to show his obedience to Jiang, Zhu had no choice but to keep a low profile and behave carefully for a while.

But Jiang recognized Zhu as a skilled administrator and never tried to deprive the premier of his power. That was because if Zhu did not work effectively, it would have a negative impact on the political and economic achievements of the Jiang era.

Relations between Xi and his premier Li are different.

Now that Xi has scrapped term limits, he will seek to remain China's de facto top leader after the Communist Party's next quinquennial national congress in 2022. The Xi camp wants to reduce any political risks as much as possible in the run-up to the critical moment in 2022. Then-Chinese Premier Zhu Rongji and President Jiang Zemin seen at the opening of the 16th Communist Party Congress in Beijing in 2002.    © Kyodo

The changes reflected how the party's "leading small groups" had gained clout. Previously they played a powerful but discreet role in formulating strategy behind the scenes. Now they have been upgraded to official party commissions and appear center stage.

In Xi's "new era," the Communist Party presides over every aspect of life. The party advocates "centralized, unified leadership" with Xi as the core.

That slogan was also enshrined in the party constitution and the national constitution. Previous moves to separate the Communist party and the Chinese government have stalled and instead they are now being integrated more closely. This political change is also being reflected in China's negotiating stance overseas.

The Sino-U. S. trade negotiations are fraught with risks as an agreement will require considerable Chinese concessions. The U.S. is making even demands that could shake the foundation of the Communist Party's rule, such as ending subsidies for state-owned companies.

Even if a compromise is reached, providing a respite for the Chinese economy, Xi cannot afford to feel complacent. If he is disgraced by being labeled a loser to U.S. President Donald Trump, it will have a significant impact on his political future. 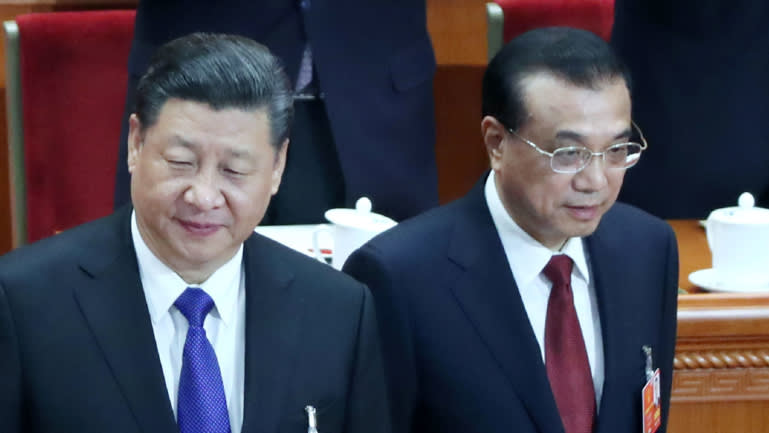 In order to control this risk, Xi has used his own team led by his trusted close aide, Liu. The team has its stronghold in the party's Central Commission for Financial and Economic Affairs, in the southern part of Zhongnanhai.

Premier Li in the northern part of Zhongnanhai has little room to exert his influence.

Even if an agreement of some kind is reached between China and the U.S. at the talks, concerns will remain about any linkage between the trade deal and domestic policies, a governmental matter.

The U.S. and China are set to compile sector-by-sector memorandums of understanding during the fresh round of negotiations in Washington.

What powers has Xi granted Liu to make concessions? Will the two sides agree on a summit between Xi and Trump to close the trade deal?

The last-minute talks between the two sides will go to the wire and the political risks for China are mounting.