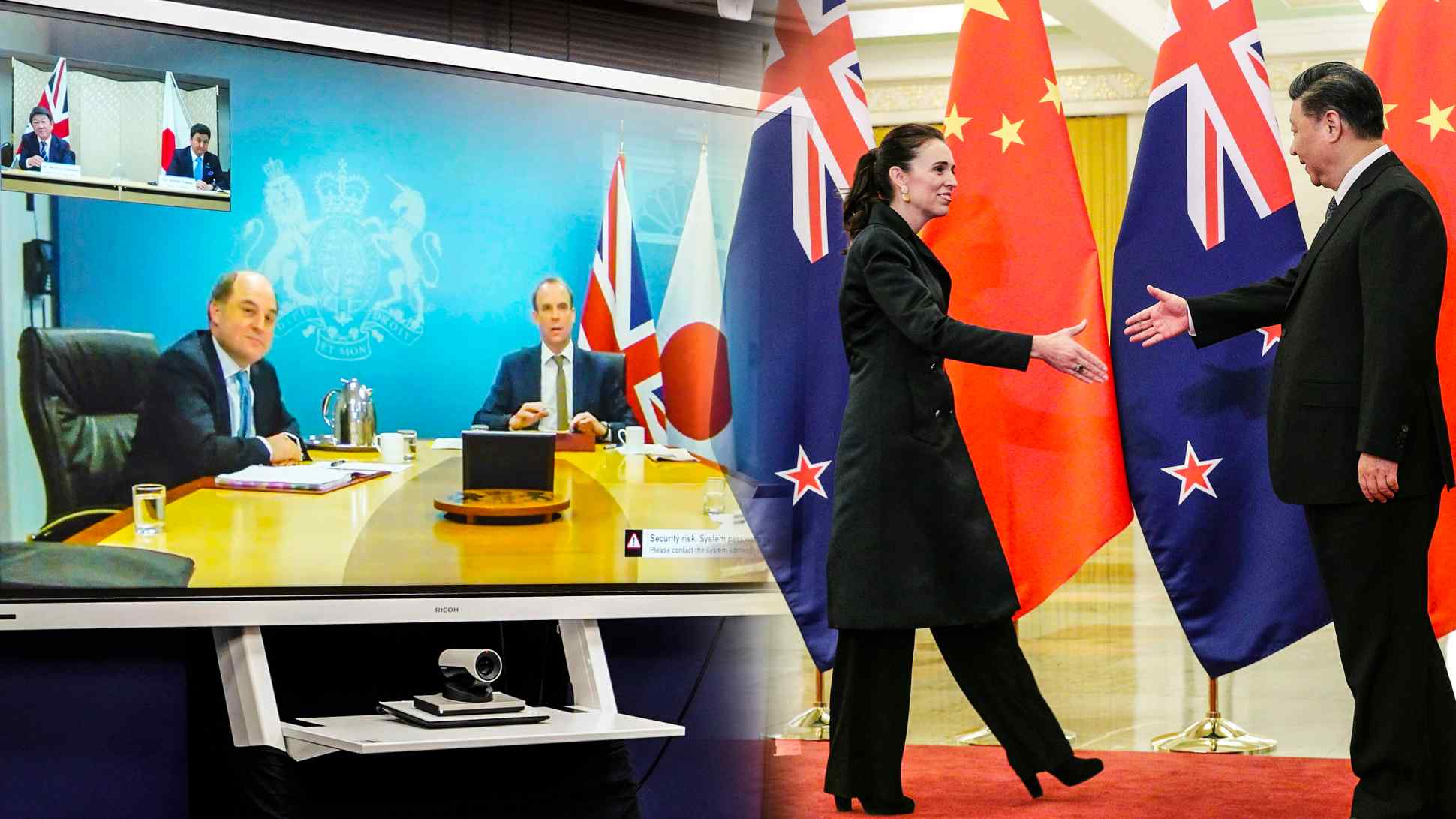 At right, New Zealand Prime Minister Jacinda Ardern and Chinese President Xi Jinping shake hands in 2019. China believes its push to join the Trans-Pacific Partnership hinges on gaining support from New Zealand. At left, the foreign and defense ministers of Japan and the U.K. hold a videoconference on Feb. 3. Beijing fears a new Anglo-Japanese alliance focused on containing China. (Source photos by Reuters)
China up close

As London eyes entry into Quad, Beijing looks to New Zealand for opening

The two men have spent many hours together, meeting and traveling when both were vice presidents. Yet in an interview broadcast Sunday, Biden said the Chinese leader is "very bright" and "very tough" but "doesn't have a democratic, small 'd,' bone in his body."

Since Biden won the election, China has explored every avenue in search of a breakthrough in deadlocked relations with the U.S. But it looks to be an uphill climb.

To thaw the frozen relationship, compromises will be needed. But leaders in Beijing will find it hard to make concessions unless they are certain that the Biden administration will not embarrass them. China cannot afford for Xi to lose face. U.S. President Joe Biden has yet to call Chinese counterpart Xi Jinping, three weeks into his administration. The two men traveled together in China years ago when both were vice presidents. (File photo)   © AFP/Jiji

Also troubling for Beijing is its quickly deteriorating relationship with the U.K.

Some are alarmed by what they call a new "quasi-alliance" between the U.K. and Japan, which, in their eyes, hearkens back to the 1902-23 Anglo-Japanese Alliance that changed the dynamics of Asia.

"You should not forget that the old Anglo-Japanese Alliance not only was aimed at countering Russia, but also it had a hidden agenda of containing China's national rejuvenation," one expert said. "By joining forces with Japan again and forming a quasi-alliance, the U.K. is now trying to block China from making a leap forward."

Britain's departure from the European Union and pivot to Asia have been compared to an opposite movement that occurred in Meiji-era Japan. "Out of Asia and into Europe" was the slogan that captivated the Japanese in the late 19th century. Now London looks to be moving "Out of Europe and into Asia."

Japan has welcomed Britain's application with open arms. If admitted, the U.K. would be the first new TPP member since the trade deal took effect in 2018 with 11 participants. The U.S. left the pact in 2017 under then-President Donald Trump. The Biden administration cannot easily return to the TPP due to domestic opposition, which is favorable for China's Asia-Pacific strategy. But if the U.K.'s membership is approved before China's, Beijing may find the gates shut tight.

U.K. Prime Minister Boris Johnson is promoting the idea of a "global Britain," seeking opportunities worldwide after being freed from the constraints of the EU. Asia is a natural and important target of the initiative, given the region's economic growth and rising trade volume with Britain. But Johnson's stance toward China is harsh.

On the Chinese internet, relations with the U.K. are described as in "free fall."

British media regulators recently revoked the license of CGTN, the English-language sister channel of state-run China Central Television, to operate in the U.K. They took the action on the grounds that CGTN, formally known as China Global Television Network, is under the Chinese Communist Party's control. A closer Japan-U.K. bond shown at a Feb. 3 meeting of their foreign and defense ministers illustrates Chinese concerns about a possible modern-day version of the Anglo-Japanese Alliance. (Photo courtesy of No. 10 Downing Street)

On Feb. 3, a "two-plus-two" meeting of Japanese and British foreign and defense ministers was held.

Beijing was watching closely, noting that the meeting that differed in nature from their previous gathering in 2017.

This time, ministers from both sides shared "grave concerns" about China's political crackdown in Hong Kong and human rights issues in Xinjiang. They also expressed strong concerns about Beijing's new Coast Guard Law, which came into force Feb. 1, which positions the China Coast Guard as a quasi-military organization and allows it to fire at foreign ships.

Tokyo and London also reached a basic agreement to hold a joint military exercise between the carrier strike group and Japan's Self-Defense Forces during the East Asia deployment.

When the Anglo-Japanese Alliance was signed in 1902, well before the establishment of the Chinese Communist Party in 1921, the pact was intended to stem Russia's southward advancement.

But it also had various effects on China, which transitioned from the Qing dynasty to the Republic of China as a result of the 1911-12 Xinhai Revolution.

With that history in mind, China is paying close attention to the strengthening of relations between Japan and the U.K., nearly a century after the alliance was abandoned. 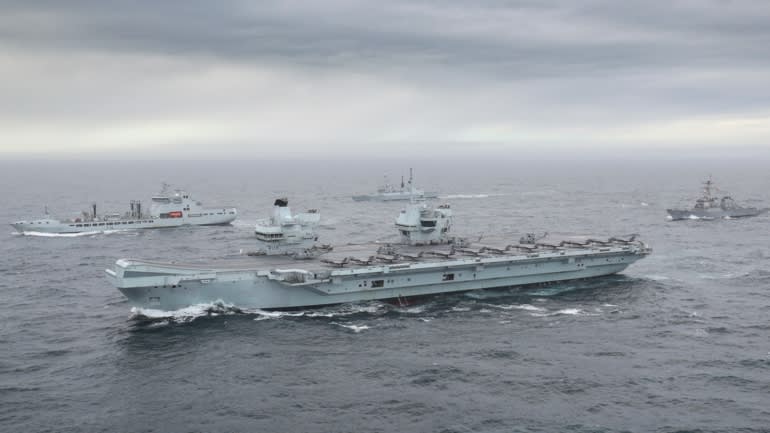 Japanese Defense Minister Nobuo Kishi welcomed the U.K.'s plan to dispatch a carrier strike group to East Asia by the end of this year. (Photo courtesy of Royal Navy)

Biden, unlike his predecessor, attaches importance to alliances, including in dealing with China over security and many other issues.

It will become difficult for China to maneuver if deepening Japan-U.K. relations grow to resemble a new "quasi-alliance" that complements the Japan-U.S. alliance and if Britain joins the Quadrilateral Security Dialogue among the U.S., Japan, India and Australia, better known as the Quad.

Yet China is not sitting idle in this period, a prelude to the tug of war over a new post-coronavirus international order.

"We are making a strategic move accordingly," one Chinese trade official said. "Holding the key is New Zealand."

New Zealand is a member of the Five Eyes intelligence-sharing alliance led by the U.S. Wellington also has kept its approach toward China largely in step with that of Australia, even as its neighbor remains locked in a fierce confrontation with Beijing.

But China has begun efforts to win over New Zealand regardless of that country's other partnerships. Any application by China for TPP membership in the future will need help from Wellington.

New Zealand is one of the TPP's original four members, when the Trans-Pacific Strategic Economic Partnership was signed by Brunei, Chile, Singapore and New Zealand in 2005. This group later evolved into the TPP.

It was New Zealand, the depositary for the trade pact, to which the U.K. submitted its letter of intent to join the TPP on Feb. 1.

China thinks it can count on New Zealand as a mediator in its confrontation with the U.S.

But will the overtures to New Zealand be enough to change the tide?

When China made a largely unexpected gambit just before Biden's inauguration to reach a basic agreement with the EU on an investment pact, it was hailed as a major diplomatic victory. The deal drove a wedge between the U.S. and Europe ahead of the incoming Biden administration.

But China overlooked one thing: The U.K. had already left the EU and was heading to Asia, China's own backyard.