Security forces stand guard at the Hankou Railway Station in Wuhan in April 2020. As the virus resurfaces, local government officials across China are growing nervous.    © Reuters
China up close

TOKYO -- China is at war, though not with another state.

One by one, local governments have declared they are in a "wartime state" against COVID-19. Now the central government has had enough.

In mid-January, the official Xinhua News Agency issued a commentary saying officials should not "cry wolf" and be too quick to declare they are entering a "wartime state." It said the abuse of the term is not conducive to the overall situation.

Crying that the wolf is coming will paralyze the masses, the commentary said, warning that such hyperbole could sap alertness if the real wolf does come and confront the country with a more urgent coronavirus crisis.

The reason local governments and the mandarins that run them are opting to declare war is simple: It gives them cover.

So afraid they are of being rebuked by Chinese President Xi Jinping for a lack of urgency, they trumpet a wartime state, look busy but do nothing.

"Don't hit mosquitoes with heavy artillery," the central government is telling them.

But heavy artillery has been on full display all over China. In Tianjin, Shanxi, Anhui, Inner Mongolia, Heilongjiang, Jilin and Liaoning, governments have taken turns declaring a wartime state since November. 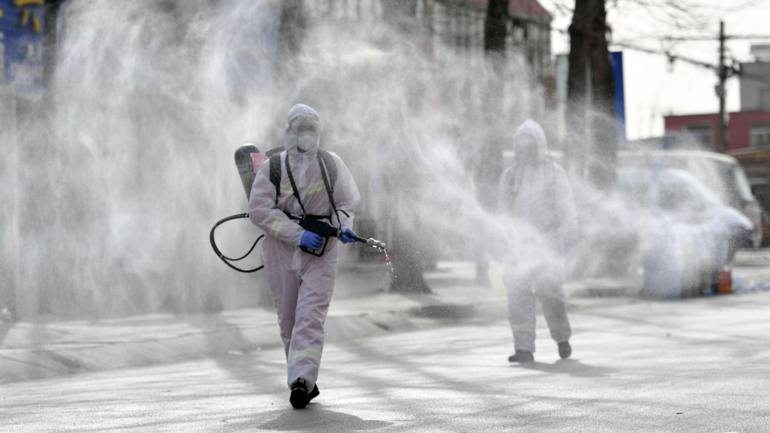 Workers disinfect the city of Shijiazhuang, the capital of Hebei, a province adjacent to Beijing, on Jan.15, 2021.    © Kyodo

If the virus is detected in facilities or food, it's war.

If a locality bumps up against another where infected people live, it's war.

If one new case is found but no new patients follow, wartime status is declared just in case.

Only in peacetime can such political performance be allowed. If a real crisis loomed, with infections growing explosively, each region's self-centered declaration of war would be nothing more than an obstacle to quickly deploy testing, medical supplies and building facilities.

The Xinhua commentary has triggered a frenzy on Chinese social media.

While many netizens agree with the call, some have pointed out that it was the central government and state media that fanned the flames.

"It's you that have been egging it on," one comment says.

These commenters have a point. Chinese state media initially were conveying central leadership's pledges to prevent any new cases from spreading and to punish any local official deemed to have mishandled the situation.

Now that the Chinese Communist Party has shifted its stance, many media outlets have begun denouncing local governments for so blindly assuming at-war crouches. War is a military term and should not be used lightly, they say.

But it was President Xi himself who used the term "total war" when Wuhan, the capital of Hubei Province, in central China, became the outbreak's first epicenter a year ago.

Xi used the term when he issued an instruction at a meeting of the Politburo Standing Committee, the party's top decision-making body, on Feb. 3, 2020.

As tensions rose with Donald Trump's America during the past four years, Xi has frequently used military terms like "war readiness" and "war preparations."

Senior local government officials, who are instructed to study the top leader's remarks, can easily recall Xi's words, and some of them use the term "wartime state" in the hope of pandering to Xi.

There is a well-known term in China that goes: "The higher-ups have policies, while the lower-downs have their own ways of getting around them."

It strikes at the heart of how Chinese bureaucrats survive.

They have used their wisdom to weather the political storm of Xi's signature anti-corruption campaign, which has been blowing since Xi took the party's helm in the autumn of 2012.

They feared being arrested due to tipoffs from rival colleagues or subordinates, so they laid low.

New projects were dangerous. To get a big project rolling, local officials would need to raise new funding, and go wining and dining at night. Jealous rivals could report on them. 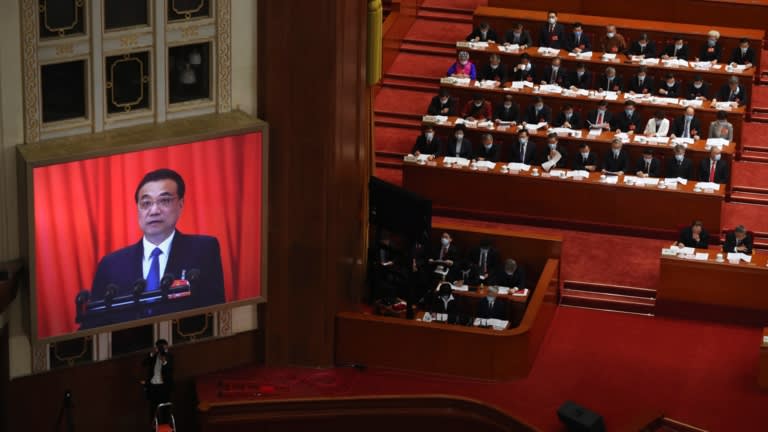 Premier Li Keqiang delivers the government work report at the Great Hall of the People in Beijing on May 22, 2020.   © AP

Thus besieged, the safest way to protect oneself was to show the flag in support of Xi's anti-corruption campaign and do nothing when it came to work.

This behavior contributed to the stagnation of local economies. Premier Li Keqiang even pointed a finger at them when he delivered a government work report at an annual session of the National People's Congress, China's parliament.

An intellectual familiar with Chinese politics offers a fresh analysis.

"The Cultural Revolution is a good example," the source said. "When the political situation is dangerous, the safe bet is to run to a conservative [in China's case, a left-leaning] stance."

It was an instinctive reaction, just as falling back on the phrase "wartime state" is now, the intellectual said.

Local officials cannot be blamed for being scared. There are countless examples of senior local officials being punished for making blunders over the handling of the coronavirus.

In February 2020, the top officials of Hubei Province and Wuhan were dismissed as the outbreak went out of control.

In Shijiazhuang, the capital of Hebei, a province adjacent to Beijing, the wolf has actually arrived. The city of 11 million, roughly the same size as Wuhan, has in effect gone into lockdown.

No longer can officials resort to looking busy. China's epidemic prevention efforts this winter have entered a critical phase. A young Xi Jinping has his photo taken in Zhengding, Hebei Province.

By showing prefabricated quarantine facilities being thrown up and firefighters in full protective gear disinfecting communities, the state broadcaster has apparently sought to make the public understand how serious the situation is.

Xi has a history in Hebei. After serving as a secretary to Geng Biao, then secretary-general of the party's Central Military Commission, Xi in 1982 went to Zhengding, in southwestern Hebei. He was still in his 20s at the time. Later, he became the county's top official.

Through his network of personal connections, Xi is said to have a true grip on what is happening in Hebei. The same does not hold true for Wuhan, where Xi has no connections.

During the party's national congress in the autumn of 2012, when Xi became the party's top leader, he was seen dining with senior Hebei officials at a well-known Beijing restaurant serving Hebei cuisine. A quarantine facility goes up in the village of Guying following a coronavirus outbreak in Shijiazhuang, Hebei Province, on Jan. 14, 2021.   © Reuters

In Hebei, the Xiongan New Area, a massive planned city fully backed by Xi, is going up with fanfare.

On Jan. 13, construction of a centralized quarantine facility commenced in Zhengding. Xi is said to have strong feelings toward Hebei, and the project is widely seen as a reflection of that.

Another reason why officials want the outbreak in Hebei contained is the province's proximity to Beijing. With the National People's Congress set for early March, the leadership cannot afford a delay of several months like last year.

With the 100th anniversary of the Communist Party's foundation set for summer, Xi's calendar has no room for changes in schedule.