Analysis: Biden's call to Putin puts Xi on the defensive

TOKYO -- World leaders have put major power diplomacy on full display this month with a flurry of international trips, meetings and phone calls.

But it was the less-touted phone conversation between Biden and Russian President Vladimir Putin three days before the Suga summit that may have astonished a watchful Xi. In their second call since late January, Biden proposed an in-person meeting with Putin in a third country in the coming months.

Xi has received no such invitation to an in-person meeting with the American president. Xi and Biden, who have known each other for more than a decade, held a lengthy phone call Feb. 10 ahead of the Lunar New Year holiday. But with diplomats from both countries clashing in Alaska last month, there has been no enthusiasm on either side to arrange a summit.

Biden's proposal to Putin is especially shocking for China as it set a time frame for the meeting: in the coming months.

Speculation suggests the two leaders will meet in June, which would be particularly uncomfortable for Xi. On July 1, the Chinese Communist Party celebrates the 100th anniversary of its establishment -- a big moment for Xi, who doubles as the party's general secretary. Why would Biden want to meet with Putin? Chinese policymakers are analyzing this move. Is the American president trying to settle issues around the world -- such as the recently announced U.S. withdrawal from Afghanistan -- so he can pour his time and energy into taking on China? Suspicion in Beijing is mounting.

Russia announced on Thursday that it will end the country's massive troop buildup near Ukraine, saying the military exercises had completed. If Xi had any doubts about whether Putin was preparing for a summit with Biden, they must be gone.

From China's standpoint, its relationship with Russia is good. The two countries have been strengthening their partnership on various fronts to counter the U.S.

But China and Russia are not allies. There is no guarantee that Moscow will always take Beijing's side.

Xi likely had these developments in mind Wednesday when he made the last-minute decision to attend Biden's climate summit, which begins Thursday. From Beijing, Xi will "give an important speech," Chinese Foreign Ministry spokesperson Hua Chunying announced.

The Chinese leader had dragged his feet on attending the summit, worried that he might play into Biden's hands and face tough demands on climate, on top of U.S. criticism regarding Beijing's pressure on Taiwan and human rights issues in Xinjiang and Hong Kong.

Biden sent John Kerry, the special presidential envoy for climate, to Shanghai on April 14. Kerry, who served as President Barack Obama's secretary of state, held a video talk with Chinese Vice Premier Han Zheng -- one of the seven members of China's top decision-making body, the Politburo Standing Committee -- who was in Beijing.

Simultaneously, Biden made another key diplomatic move across the Taiwan Strait.

A day after Kerry arrived on the mainland, an unofficial American delegation was in Taipei for talks with Taiwanese President Tsai Ing-wen. The delegation included former Sen. Chris Dodd, who is close to Biden, and former deputy secretaries of state Richard Armitage and James Steinberg. 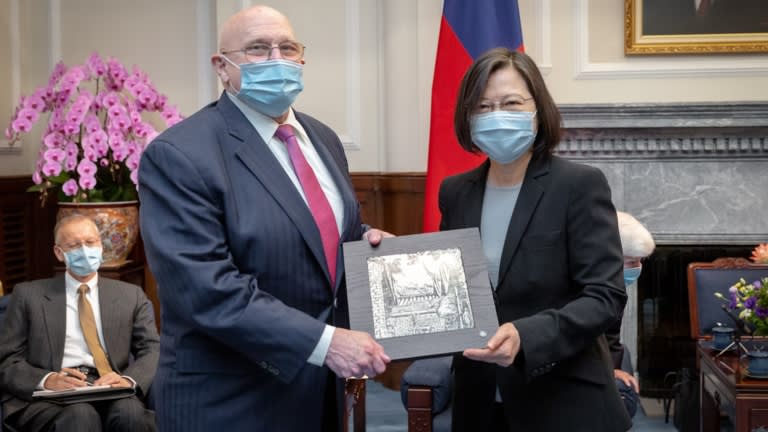 It was a delicate balancing act for Biden. While signaling his willingness to cooperate with China on climate change, the president demonstrated his support for Taiwan on the security front.

It was also a calculated step toward his April 16 talks with Suga, during which peace and stability in the Taiwan Strait became a focal point.

Xi, for his part, launched a diplomatic counteroffensive. He held a previously unannounced video summit on climate change April 16 with French President Emmanuel Macron and German Chancellor Angela Merkel. Xi was not going to sit back and let Biden take the initiative on climate.

Beijing's relationship with the European Union has been rocky in recent months, after the latter imposed sanctions on China over human rights issues in the Xinjiang Uyghur Autonomous Region.

But climate change is a topic that the leaders of China, France and Germany can discuss comfortably. They exchanged views on the investment pact between China and the EU, which the two sides signed in the lead-up to Biden's inauguration but which has since stalled. Meanwhile, on the U.S.-Russia front, another unexpected move puzzles policymakers in Beijing.

On April 15 -- only two days after the phone call between Biden and Putin -- the U.S. played hardball with Moscow, slapping new sanctions on Russian companies and individuals and expelling 10 Russian diplomats. The sanctions cited "harmful foreign activities" by the Russian government, including the ongoing occupation and repression in Crimea, the Ukrainian peninsula that Russia seized in 2014.

Though many miles away, Beijing has strong interest in Crimea's future because the issue overlaps politically with Taiwan. If push comes to shove, China might attempt to take over Taiwan by force, just as Russia did in Crimea.

The global tug of war among Xi, Biden and Putin over Taiwan and Ukraine holds the key to understanding the recent flurry of intricate diplomatic activities by the world's major powers.

Though the U.S. and Russia are unlikely to draw closer quickly, China is still on its toes.

"Biden has declared China to be the most serious competitor to the U.S.," one Chinese analyst observed. "There is no logic for U.S.-Russia relations to turn worse than U.S.-China relations."

As if to prove that, Putin announced on Monday that he will attend Biden's climate summit -- brushing aside the new U.S. sanctions on Moscow. If Putin hopes for an in-person summit with Biden in the coming months, it makes sense for the Russian leader to attend the climate event as a prelude to the bilateral meeting. 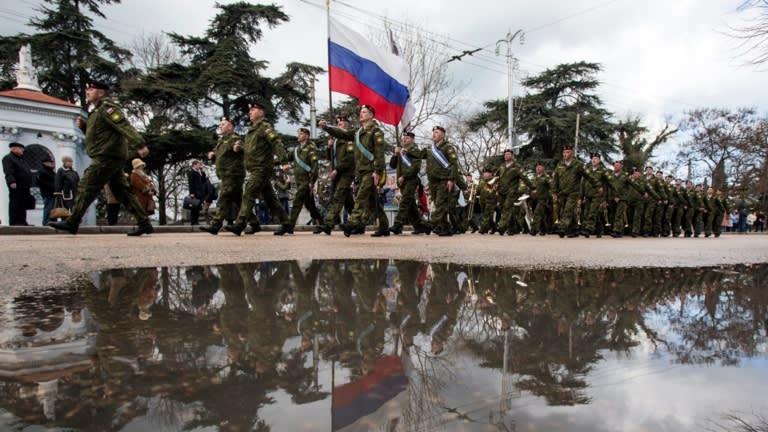 Russian servicemen take part in a festive procession on the anniversary of the Crimean treaty signing in Sevastopol, Crimea.    © Reuters

China's careful analysis of major power diplomacy was seen in its staggered response to the Biden-Suga joint statement, in which the U.S. and Japan mentioned Taiwan in a summit statement for the first time since 1969.

Though the mere mention of Taiwan, which Beijing regards as a "core interest," is unacceptable from China's standpoint, the Japan-U.S. joint statement was in line with expectations. That is why the first official Chinese reaction came through the country's embassy in Washington.

That was followed by the Chinese Embassy in Tokyo, and then finally a statement from the Foreign Ministry in Beijing.

China criticized the Japan-U.S. statement for expressing concerns about Taiwan, Hong Kong, Xinjiang and other issues and warned that Beijing "will take all necessary measures to resolutely defend its sovereignty, security and development interests."

But after the war of nerves, a forward-looking U.S.-China joint statement concerning climate change was issued on Sunday China time. It came after the Japan-U.S. summit and related events in Washington ended, and also after Kerry had left Shanghai. 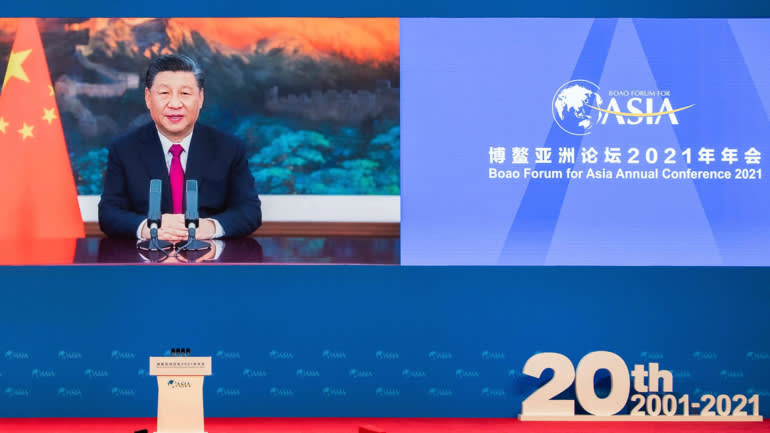 Chinese President Xi Jinping tells the Boao Forum for Asia on April 20 that global "openness and integration is an unstoppable historical trend," as he denounces supply chain decoupling in the high-tech sector.   © Xinhua/AP

Looking back at this month's events -- the Biden-Putin phone call, Kerry's visit to China, the unofficial U.S. delegation's trip to Taiwan, Suga's visit to Washington and the U.S.-led climate summit -- these seem to have been firmly incorporated into the White House's broader strategy toward China.

China wants to take effective countermeasures. A soft target for China is Japan.

Beijing might begin with intensifying incursions by the country's vessels into the waters around the Japanese-administered Senkaku Islands, which China claims and calls the Diaoyu Islands.

But bashing Japan heavily may not be the best policy. The Chinese economy would suffer a serious blow in the medium and long term if the decoupling of mutually dependent semiconductor and other industrial supply chains progresses quickly.

Beijing hosts the Winter Olympics in February 2022. How will China move, while being careful not to add fuel to calls in Western countries for a boycott of the quadrennial sports extravaganza?

On Tuesday, Xi attended the opening ceremony for the annual conference of the Boao Forum for Asia in the southern Chinese province of Hainan via video link. In a speech, he stressed opposition to decoupling in the high-tech sector and "a new cold war."

"In this age of economic globalization, openness and integration is an unstoppable historical trend," Xi said. "Attempts to 'erect walls' or 'decouple' run counter to the law of economics and market principles. They would hurt others' interests without benefiting oneself."

When will the U.S. and China set the first in-person meeting between Xi and Biden? Chinese policymakers might need to watch and wait for the Biden-Putin summit to plan their next move.