Chinese President Xi Jinping and U.S. President-elect Joe Biden hosted each other on mutual visits as vice presidents, trying to establish a personal relationship early on. Will the efforts bear fruit? (Source photos by AP, Reuters and AFP/Jiji
China up close

Analysis: Biden's old friend Xi is not the man he once was

The two go back nine years, but China's rise has complicated the relationship

The long-established eatery, in an old section of the Chinese capital, serves chaogan, a comfort food for ordinary Beijing citizens made by stewing pork liver and intestine.

Nine years ago, Joe Biden, then President Barack Obama's vice president, popped in for lunch with his granddaughter Naomi.

Biden had just met with then-Chinese Vice President Xi Jinping. Pictures of a smiling Biden were published in Chinese newspapers the following day, capturing the warm and friendly nature of the six-day tour in the summer of 2011.

The Obama administration arranged an unconventionally long trip to China so Biden could form a deep, personal relationship with Xi, who despite being the heir apparent to President Hu Jintao had few direct interactions with foreign leaders.

The two spent many hours together during that trip and subsequent mutual visits, but this past does not guarantee future improvements in U.S.-China relations. Then-Vice President Joe Biden smiles during a stop at a local restaurant for lunch in Beijing on Aug.18, 2011. But he did not try the signature dish chaogan. (Source photos by Tetsushi Takahashi and Reuters)

Before the U.S. election, many Chinese analysts had forecast that regardless of the winner, Biden or President Donald Trump, China's tense relations with the U.S. would continue. The important question is, how does President Xi see it?

"Our president must be a little relieved. He knows Biden well," said one Chinese source versed in U.S. relations. "They traveled together nine years ago so Xi probably understands in his own way what kind of person Biden is. At least he is not as unpredictable as Trump."

Biden's six-day tour of China in August 2011 was a relaxing one. He stayed in Beijing for three days, including for talks with Xi. He also visited Chengdu, the capital of Sichuan Province in southwestern China, to deliver a speech and sightsee.

Throughout most of his trip, Biden was accompanied by his then counterpart Xi.

Veteran diplomat Cui Tiankai acted as an attendant and de facto interpreter. Cui was then serving as vice foreign minister. Two years later, Cui went to Washington as ambassador to the U.S.

During Biden's China tour, he and Xi spent much time together, holding talks in Beijing and Sichuan, and eating at the same table. Perhaps not best friends, they probably came to know each other's personalities to some extent.

Pulling out all its diplomatic tools to entertain guests and make them feel good is a specialty of the Chinese Foreign Ministry. Then-Vice Presidents Joe Biden and Xi Jinping have dinner at the Jianjiang hotel in Chengdu, China on Aug. 21, 2011. (Photo courtesy of the White House)

Biden did not forget to praise his hosts.

In his speech at Sichuan University in Chengdu, he said, "I would like to introduce you to two of my family members who I've brought along with me, my daughter-in-law Kathleen Biden and my granddaughter Naomi Biden."

"It would be more appropriate to say Naomi brought me along with her since she's a budding Chinese speaker, been taking Chinese for five years, so I've been listening to her on the whole trip," he said.

He also referred to the experiences of another family member who, he said, "learned Mandarin at Harvard and spent a year in Beijing refining her language skills and ultimately worked at our Treasury Department on U.S.-China relations."

The trip helped Xi, Biden and Cui sustain good U.S.-China relations in the years that followed.

In February 2012, half a year after Biden visited China, Xi traveled to the U.S.

In a Valentine's Day meeting at the White House, Biden took Xi to the Oval Office for a courtesy call, where President Barack Obama sat down with the Chinese leader-in-waiting for 85 minutes. 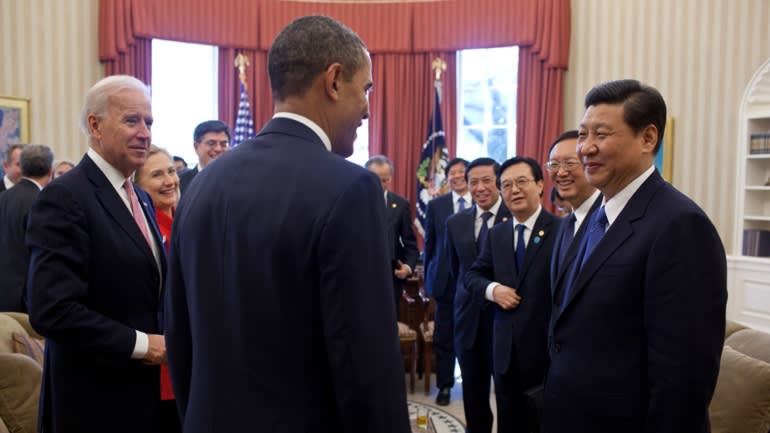 Biden then accompanied Xi to Los Angeles. A deal announced there, to allow more Hollywood movies into China every year, was seen as a testament to U.S.-China cooperation.

Relations with Obama's successor, Trump, turned out to be trickier.

Xi has a bitter memory of his first meeting with Trump. In April 2017, while hosting Xi at his Mar-a-Lago estate, Trump ordered a missile strike on Syria

Xi and his wife, Peng Liyuan, were greeted at the Florida estate by Trump's daughter Ivanka, her husband, Jared Kushner, and their children as well as the First Couple.

Images of Trump and his family entertaining Xi and Peng went viral in China. But immediately before the singing, the Trump administration had decided to launch the missiles, despite knowing that China had been against a U.S. strike.

During the subsequent long dinner, the attacks began. Xi was left in the dark. Only as the banquet was about to end was he informed, by Trump, of the aerial attacks. The surprise was similar to one Xi had delivered to Biden in December 2013, after Xi had become China's top leader. Biden was on another visit to China, this time accompanied by another granddaughter, Naomi's younger sister Finnegan.

The idea was to project a "family-to-family friendship." But that screenplay hit the trash can when it was learned China had abruptly established an air defense identification zone, or ADIZ, in the East China Sea, as if to coincide with Biden's visit.

The zone affects the defense of the Japanese-administered Senkaku Islands, which China claims and calls the Diaoyu. Xi, who had by then taken the helm of the Chinese military, was playing a risky game, testing the U.S.-Japan security alliance.

Six months earlier, in June 2013, Xi had made his first visit to the U.S. as China's top leader.

Xi held talks with Obama in the desert resort town of Palm Springs, California, and proposed "a new type of great power relationship" between the countries. It envisioned the powers leading the world while cooperating on an equal footing.

"The vast Pacific Ocean has enough space for both China and the U.S." Xi told Obama, suggesting that the countries share or divide trade, economic and security interests in the Pacific.

In effect, Xi was claiming the western half of the Pacific Ocean for China.

Had the U.S. agreed, the power balance in the Asia-Pacific region would have crumbled.

The international order was at a critical juncture, and in November 2013, Susan Rice, Obama's national security adviser, delivered an Asia-Pacific policy speech in which she expressed a willingness to accept the notion.

"When it comes to China, we seek to operationalize a new model of major power relations," she said. "That means managing inevitable competition while forging deeper cooperation on issues where our interests converge -- in Asia and beyond."

Instead, it marked the peak of U.S.-China relations.

When China set up its ADIZ in the East China Sea the following month, tensions flared.

Interestingly, after the Xi-Biden meeting at the end of 2013, the U.S. stopped using the term "major power relations."

Biden had hoped Xi would be an open-minded leader and maintained a China-friendly posture. But with Xi taking a tough, military-first line, Biden had no choice but to alter his stance. Then-Vice President Joe Biden buys an ice-cream at a shop as he tours a Hutong alley with his granddaughter Finnegan Biden and son Hunter Biden in Beijing on Dec. 5, 2013.   © Reuters

A sense of caution then grew within the Obama administration, and three months later, when Obama met Xi at The Hague in the Netherlands, the American leader made no mention of "major power relations."

The episode marked the beginning of a long, gradual deterioration of U.S.-China relations -- long before Trump won the 2016 U.S. presidential election with his "America First" agenda.

Despite having been spurned by the U.S., China has come up with a plan B. It has set a goal of joining the ranks of midlevel advanced countries, then catching up with and overtaking the U.S. economically by 2035. Another target: achieving a significant breakthrough toward technological supremacy.

Militarily, China has been getting stronger by the year, and its advancement into the Pacific is already at a stage that cannot be ignored.

China's ambitions are there for all to see. Beijing no longer bothers to hide them. The Biden administration will have to come up with a game plan. Sitting idly by is not an option.

When Biden visited the Yaoji Chaogan Restaurant Xi nine years ago, he did not order the restaurant's signature dish. Stewed pork liver and intestines were a bit too much for the American, despite the dish's excellent flavor.

When it comes to forming China policy, will Biden flinch like he did at the thought of eating pig livers and intestines? Japan, South Korea and other Asian nations are watching.