Analysis: China firms up plan for 2035 road and railway to Taiwan

TOKYO -- On Friday, as China convenes its most important political gathering of the year, the annual session of the National People's Congress, all eyes will be on the discussion of the unusually long-term plan that is set to be approved. It will guide the country all the way up to 2035.

The goals President Xi Jinping sets for the upcoming 15-year period should offer clues as to how long he intends to stay in power.

From that standpoint, an eye-popping project related to Taiwan has surfaced as part of the 2035 plan: a high-speed railway and expressway linking Beijing and Taipei.

The National Comprehensive Transportation Network Plan, jointly released by the Chinese Communist Party and the Chinese government, clearly shows the transport network reaching across the Taiwan Strait all the way to Taipei.

When Transport Minister Li Xiaopeng appeared at a news conference on Monday to talk about the outline, he had with him a map of the high-speed railway and other networks planned to be completed during the next 15 years. One greenish line stretched over to Taiwan. 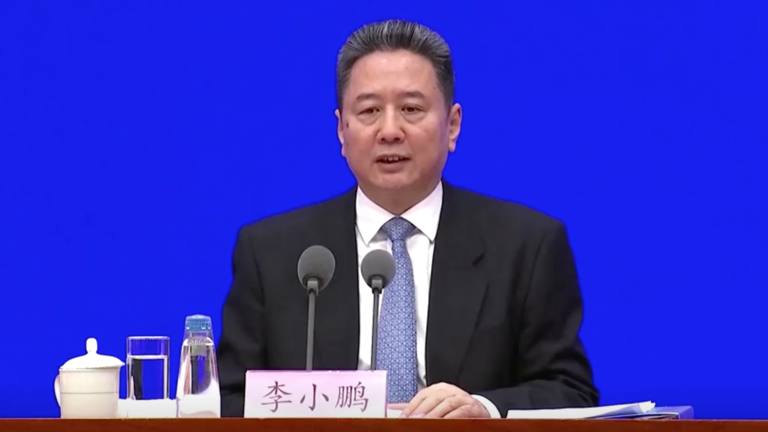 Chinese Transport Minister Li Xiaopeng appeared in front of reporters on March 1 holding a map of a high-speed railway -- stretching to Taipei.   © CCTV/Reuters

The idea of building a tunnel under the Taiwan Strait has been mentioned in the past. But it never went any further than words on paper as nobody had the political capital to see through such a grandiose and costly project.

What differs this time is that China has a strong leader with a considerable power base. Its inclusion in the ultralong-term plan to 2035 -- synonymous with Xi's game plan to stay in office beyond the customary 10 years --  has sent shock waves across both sides of the strait. On the mainland, reaction on social media ranged from chest-thumping positive -- "2035 will come soon; we are very serious" -- to questions such as, "Will it really come true in 15 years?"

In Taiwan, the reaction was overwhelmingly negative. "It's just a pipe dream," netizens said.

That neither side is on the same wavelength surprises no one, especially since cross-strait dialogue has long been cut off.

In January 2020, Taiwanese President Tsai Ing-wen of the pro-independence Democratic Progressive Party secured a second term by winning a resounding victory in the presidential election over her rival candidate from the Kuomintang, the Chinese Nationalist Party.

In stark contrast to China, Taiwan won international praise for its initial response to the coronavirus outbreak. This, coupled with the Taiwanese economy humming along, has allowed Tsai to enjoy relatively high public approval ratings.

China's stance is to reject dialogue with Taiwan unless the Tsai administration acknowledges there is but "one China."

Yet with Tsai set to stay in office until 2024, the reality is that Beijing has few cards to play. China and Taiwan appear to be locked in a stalemate.

If the project is put into action, what would the path forward look like?

With Taiwan in denial, it is hard to imagine an amicable groundbreaking ceremony taking place, which leads one to speculate, "If China is serious about completing the project in 15 years, does it envision forcing its way onto the island?" The whole purpose of floating plans for a road to Taipei may very well have been to put the Taiwanese on their toes and make them contemplate some horrific thoughts. This would be a shrewd psychological tactic.

The amount of promotion on social media by government-affiliated media outlets about the project hints at such a campaign.

If Xi remains as China's top leader after the party's national congress next year and has an eye on eventually extending his reign until around 2035, reunifying Taiwan with mainland China would probably emerge as a specific agenda item.

In November 2015, a historic meeting of top leaders from China and Taiwan was held in Singapore. Xi and then Taiwanese President Ma Ying-jeou of the Kuomintang shook hands for a full 80 seconds.

It was the first meeting between the top leaders of China and Taiwan since they split in 1949 following the civil war between communists and nationalists. It also sparked speculation that Xi might aim for an extended reign under the banner of reunifying Taiwan.

Such a reunification is essential if "the great rejuvenation of the Chinese nation" -- a political slogan that has been highlighted since the Xi era began -- is to be realized.

The starting point of a cross-strait transport link would be Pingtan Island, in Fuzhou, the capital city of Fujian Province. From there, Hsinchu, in the northwest of Taiwan, is about 130 km away.

China in the past has said that connecting Pingtan Island and Hsinchu via an undersea tunnel is technically viable.

Xi has strong feelings about the jumping-off point to Taiwan. He spent 17 years in Fujian, before leaving for Zhejiang Province in 2002. During his final days in the southeastern province, he lived in Fuzhou as provincial governor.

Around that time, he "occasionally visited the shores of Pingtan Island," a senior local official said. "It seems to have been his favorite place."

After the Xi era began, a national project was launched on Pingtan Island, with an eye on its joint development with Taiwan. Work on a bridge, port and other infrastructure progressed at a rapid pace.

On the mainland side, Pingtan Island was linked to Fuzhou via a high-speed railway. A special district was also established to attract Taiwanese companies.

As the island modernizes, it is completely transforming from what it was in the 1990s.

Pingtan Island has also been the front lines for some military saber-rattling between China and Taiwan. In March 1996, with cross-strait tensions high, China carried out an integrated military exercise involving its army, navy and air force there. Taiwanese President Tsai Ing-wen promotes locally grown pineapples in the city of Kaohsiung on Feb. 28, the day before China banned shipments of the Taiwan-grown fruit.   © Wang Yu Ching/Office of the President

On Monday, as the Beijing-Taipei transport network was being announced, China imposed an import ban on Taiwanese pineapples, blaming the detection of pests.

China's ban no doubt will deal a severe blow to Taiwanese pineapple farmers, who send the bulk of their crop to mainland China.

China's surprise move could lead to a reversal of the country's policy to aggressively purchase Taiwanese agricultural products, which has continued since the era of former President Hu Jintao, Xi's predecessor.

In the U.S., the administration of President Joe Biden is maintaining close ties with Taiwan, in line with the previous administration.

Perhaps Biden's taking the Taiwan baton from former President Donald Trump and running with it explains why Beijing has decided to further squeeze Taiwan's economy and talk up what amounts to a security concern for the island.

The transport link and pineapples might prove to be bellwethers ahead of the National People's Congress, when China begins to unveil the details of that unusually long-term plan.