TOKYO -- Within days of the heated U.S.-China diplomatic exchange in Alaska, senior officials from both countries were flying around the world, bolstering ties with nations they deem to be on their side.

Chinese Foreign Minister Wang Yi left March 24 on a six-nation tour of the Middle East. But it was Defense Minister Gen. Wei Fenghe, through a carefully chosen itinerary, who sent the strongest message.

On Friday, the general was in Belgrade, meeting Serbian President Aleksandar Vucic. After inspecting Serbian troops, exchanging pleasantries and thanking Serbia for respecting China's "core interests," Wei told Vucic that he had made a trip to a special place earlier in the day.

"The Chinese people will never forget this period of history," Wei said. "And the Chinese People's Liberation Army will never allow such history to repeat itself."

That history was the night of May 7, 1999, when as part of airstrikes on Belgrade by U.S.-led NATO forces during operations against Yugoslavia, an American B-2 aircraft accidentally bombed the Chinese Embassy, killing three Chinese journalists. Wei visited the site of the former embassy and paid tribute to the deceased. 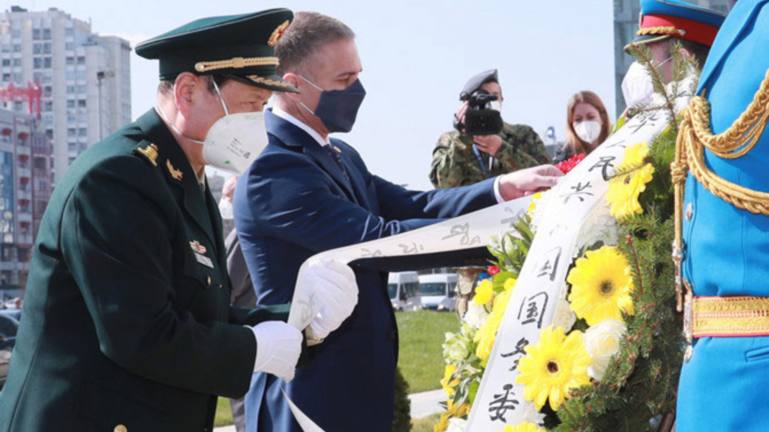 Chinese Defense Minister Wei Fenghe on March 26 visits the site of the country's embassy in Belgrade that was bombed by NATO in 1999 during operations against Yugoslavia. Three Chinese journalists died in the bombing. (Photo courtesy of the Chinese Ministry of National Defense)

"China is fully capable and determined to defend its national sovereignty, security and development interests," Wei told the Serbian leader.

Wei holds the highest rank in the military and is a member of the Central Military Commission, the top armed forces organ that supervises the PLA. Footage of Wei visiting the embassy site evoked the strong anti-U.S. and anti-NATO feelings among the Chinese people.

China never accepted the U.S. explanation that the bombing was a mistake. Even after Xi Jinping became the Chinese president in 2013, the country's media outlets continued to claim that it was a "deliberate" bombing.

Following the incident in 1999, tens of thousands of Chinese student protesters gathered in front of the U.S. Embassy in Beijing. The building turned yellow, red and blue as protesters threw plastic bottles of paint. The embassy's front windows were shattered.

Two decades later, anti-U.S. sentiment is rife again, as can be seen by the blistering attacks on social media following the Alaska meeting that began March 18.

Yet no high-profile anti-American demonstration has occurred within China so far. A look back on how the demonstrations were organized in 1999 provides clues as to why.

Cheng Chunhua was an assistant to the chairperson of the Peking University Students' Union and one of the organizers of the embassy protest. At the time, Cheng spoke frankly to Nikkei in an interview. The embassy bombing in 1999 sparked anti-U.S. protests in China, including by Peking University students. Five buses bound for the embassy district were arranged through Beijing's municipal government.

"As soon as the bombing incident became public, the momentum toward holding a protest grew on the campus," Cheng had said. "Some people were already heading to the scene."

"I thought instinctively that authorities, including the police, will approve of such a demonstration. So I applied for permission to organize one through my school," Cheng said. "As expected, I was quickly given the green light by the municipal government of Beijing, and five buses bound for the embassy district were arranged."

Peking University had played a central role during the 1989 Tiananmen Square protests for democracy. With memories of that bloody crackdown still fresh, the top priority for Chinese authorities was to prevent the protests from running out of control -- thus, the buses. An orderly outburst of patriotism was acceptable to them.

Back in 1999, there was a world of difference between the U.S. and China in terms of economic and military power. Student protesters carried banners with the slogan, "Don't insult the Chinese nation." The slogan also represented an outburst of their pent-up feelings.

China stands in quite a different position today. It now possesses the weight to punch back.

The diplomatic visits last week were a display of such clout. In the Middle East, Wang spoke to his hosts as the world's top energy purchaser. In eastern Europe and the Balkans, Wei proposed expanding military exchanges, raising eyebrows among NATO observers.

The supply of made-in-China coronavirus vaccines also provides the country with powerful ammunition.

At home, China's manufacturing and consumption muscles were flexed as foreign apparel companies faced intense pressure for criticizing the country's actions in the Xinjiang Autonomous Region, where human rights violations against the Uyghur ethnic group are alleged.

It has become impossible to find H&M products on major Chinese shopping websites, apparently due to past statements by the fast fashion chain declaring it will not trade with Chinese companies that operate factories in Xinjiang. A security guard stands outside an H&M store in Beijing on March 25. The Swedish fashion retailer's products have suddenly vanished from major Chinese shopping websites, apparently due to the company's statements against alleged human rights abuses in China's Xinjiang region.   © Reuters

The mass scrutiny campaign has spilled over to other clothing retailers, including Nike and Adidas, as they also take heat for past statements on the alleged use of Uyghur forced labor in cotton production.

Chinese actors and celebrities have rushed to join the criticism, terminating endorsement and sponsorship contracts with H&M, Nike, Adidas and other international fashion brands. These celebrities issued statements saying they cannot tolerate any act to "smear" China -- comments reminiscent of the "Don't insult the Chinese nation" slogan chanted by student protesters in 1999.

In the age of e-commerce, a sudden, peremptory blockage of online shopping is equivalent to the street demonstrations that blocked access to downtown districts back in the day.

After the U.S.-China talks in Alaska, a social media outlet affiliated with the People's Daily, the mouthpiece of the Communist Party, cited China's history of being trampled upon by Western powers 120 years ago.

It published two photographs side by side, one of them showing the humiliating 1901 Boxer Protocol being signed with the Eight-Nation Alliance. The other was a photo of the Alaska meeting. 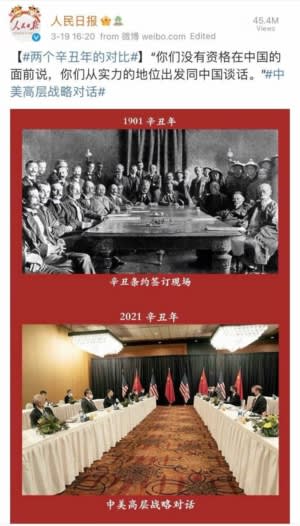 This collage comparing the signing of the unfair Boxer Protocol in 1901 to the U.S.-China meeting in Anchorage, Alaska, went viral on Chinese social media. (Photo taken from Weibo)

The eight nations were the U.K., the U.S., Germany, France, Italy, Russia, Japan and Austria-Hungary, to whom the Qing government had to pay damages. Signatories receiving damages also included Belgium, the Netherlands and Spain.

The message was loud and clear: "Never again." China and the U.S. now can engage in a shouting match on equal footing, thanks to the Communist Party regime's "strong country" policy.

During the demonstrations in front of the U.S. Embassy in Beijing at the end of the 20th century, some students shouted, "China will become the world's No. 1 country sometime in the future."

That seemed to be a mere pipe dream then, but such status is now within China's reach.

The lack of current anti-American demonstrations in China could reflect the confidence the country has amassed. Street demonstrations, after all, are a method for people in weaker positions to stand up against the strong as a last resort.

China's public today does not feel the need to use such a method. The people are confident about how they brought the coronavirus outbreak under control. They are proud that the economy is back on a growth track.

But it is also true that China faces increased criticism from around the world. Especially troublesome for Beijing was the decision by the European Union to join the U.S. in sanctioning China over the treatment of the Uyghur minority.

China is not sitting idle. Ahead of Wei's eastern Europe visit, Xi made a surprise appearance at the "17+1" online summit of leaders from China and 17 central and eastern European countries Feb. 9. For a long time, China's representative to the "17+1" dialogue had been Premier Li Keqiang.

Xi advocated strengthening China's relations with eastern European and Balkan countries, a countermeasure to the attempts by U.S. President Joe Biden's administration to build an international coalition against China.

The confrontation between the camps led by the U.S. and China continues to intensify.