Chinese Foreign Minister Wang Yi, left, appears jovial as he meets with Japanese Prime Minister Yoshihide Suga, who betrays no hint of a smile under his mask. (Source photos by Uichiro Kasai and Kyodo)
China up close

Analysis: China pressures Japan at sea with Biden on horizon

TOKYO -- Foreign Minister Toshimitsu Motegi is under fire in Japan for maintaining a smile and not objecting during a joint press conference with his Chinese counterpart as Wang Yi pronounced his take on what is happening in the East China Sea.

During a two-day visit last week, Wang repeatedly painted the tensions around the Senkaku Islands, a group of small uninhabited islets in the East China Sea administered by Japan, as being the fault of Japanese boats coming too close to the shores.

"The fact is that recently some Japanese fishing boats of unknown origin have repeatedly entered the sensitive waters off the Diaoyu Islands, and China has to make necessary response," Wang said, referring to the islands as they are known and claimed in China.

Chinese government vessels have sailed into Japanese territorial waters around the islands on a regular basis for months.

"China's position is clear," Wang said. "The Chinese side will continue to firmly safeguard its sovereignty and at the same time proposes three hopes." Japanese Foreign Minister Toshimitsu Motegi, right, was criticized for maintaining a smile during a joint news conference with Chinese counterpart Wang Yi in Tokyo on Nov. 24.

Firstly, the two sides should earnestly abide by the four-point principled consensus reached between China and Japan, he said, referring to a 2014 agreement that included a promise to prevent the deterioration of the situation in the East China Sea through dialogue and consultation.

Secondly, the two sides should avoid taking actions in sensitive waters that may complicate the situation.

Thirdly, once there are problems, the two sides should communicate in a timely manner and deal with them properly, he concluded.

At first glance, Wang's remarks seem to be positive toward resolving the tensions. But in reality, they are a curveball thrown at Japan, carefully crafted with a specific goal in mind.

One must not be overwhelmed by smoke-screen adjectives such as "fishing boats of unknown origin."

China's argument is that because Japanese fishing boats are entering sensitive waters, official Chinese vessels are merely engaging in law enforcement activities. If this logic were to be accepted, it would justify the repeated Chinese intrusions into Japanese waters.

Japan's official stance has always been that no territorial issue exists because the Senkaku Islands are an inherent part of Japan's territory based upon international law and are under the valid control of Tokyo.

Acceptance of Wang's logic essentially shatters Japan's valid control and could lead the issue of the Senkakus to be regarded as a territorial dispute in the eyes of the international community. Wang's remarks have sparked an outcry in Japan. Motegi drew immediate criticism from Japanese politicians for failing to hit back against the Chinese official on the spot. Instead, he let Wang have the last word, concluded the news conference and politely showed his guest the way out of the hall.

The criticism came not only from within the ruling Liberal Democratic Party but also from the opposition Japanese Communist Party. In response, the Foreign Ministry corrected its previous account of the Motegi-Wang talks.

The ministry said on Nov. 25 that during the talks the previous day, Motegi had made more strongly worded remarks than initially reported and conveyed Japan's "strong concerns" to Wang about the repeated intrusions by official Chinese vessels into Japanese territorial waters around the Senkakus.

Wang's remarks were not off the cuff. They were in line with a carefully devised strategy. It is a prelude to the tug of war between the two countries over the "fifth political document" they both intend to sign when Chinese President Xi Jinping eventually makes his first official trip to Japan.

Wang, a fluent Japanese speaker, nodded in agreement as he carefully checked each word that the translator conveyed to his hosts. Video footage of Motegi's soft expression and slight smile risks sending the wrong impression to the world that Japan approved the Chinese foreign minister's views. Then-Chinese President Hu Jintao, left, and then-Japanese Prime Minister Yasuo Fukuda agreed to jointly develop gas fields in the East China Sea during their May 2008 meeting in Tokyo. No progress has been made to this day.   © Reuters

The incursions by Chinese government vessels into the Japanese territorial waters, within 12 nautical miles of the Senkakus, do not have a long history. The first such intrusion took place Dec. 8, 2008, when two Chinese patrol ships entered the area.

The ships stayed in the waters for as many as 10 hours. They also took photos as proof of China's territorial claim. It was clear the ships were acting according to an official choreography.

Only six months earlier, in June 2008, Japan and China had reached an agreement on the joint development of gas fields in the East China Sea, another long-standing bilateral issue in the sea, raising hopes of reconciliation between the two countries.

Then-Japanese Prime Minister Yasuo Fukuda and then-Chinese President Hu Jintao had staked their political capital to reach a deal. But to this day, no progress has been made in talks for a joint development project.

Looking back, a senior researcher specializing in foreign and security affairs at a Chinese think tank speculated that had the 2008 deal been implemented, "the fierce anti-Japanese demonstrations in 2012, triggered by Japan's nationalization of the Senkaku Islands, and the collapse of bilateral relations would have been avoided."

A major shift in China's foreign and security policies toward Japan took place in the last months of 2008. The first intrusions into Senkaku waters were clear examples of this change, with an eye on altering the status quo by force.

The driving factor behind the aggressive moves was the political developments in the U.S., Japan's top ally. Democratic candidate Barack Obama won the presidential election in November and was preparing for his inauguration in January. As the transition from President George W. Bush to the Obama administration was taking shape, Beijing sought to lobby the incoming team -- which included Joe Biden as the new vice president -- to attach particular importance to Sino-American ties.

"Great power diplomacy" was the buzz phrase of the time in Chinese statecraft. The "great powers" here refer to the U.S. and China.

Twelve years on, a similar situation is arising, as China makes strategic moves during a U.S. political transition. Like in 2008, the White House is shifting from the Republican Party to the Democratic Party.

Further advantageous for Beijing is that the political turmoil in the U.S. today is much deeper than in 2008.

It was under such circumstances that Wang Yi made his comments in Tokyo.

In a subsequent visit to South Korea, Wang secured a deal that came as a surprise to many. China and South Korea agreed to launch a "two-plus-two" meeting of foreign and defense ministers.

The two-plus-two meeting is typically a framework for frank dialogue between two countries that have relations of trust on the security front. South Korea, a U.S. ally, has taken the bold step of agreeing to inaugurate such a meeting with China.

South Korean commentators have acknowledged that this was a victory for China, taking advantage of the vacuum created during the U.S. transition.

Xi often refers recently to "profound changes unseen in a century" that are taking place in the world.

The Chinese president's goal by sending Wang to Japan and South Korea was to expand Beijing's sphere of influence both politically and economically before the Biden administration is inaugurated. 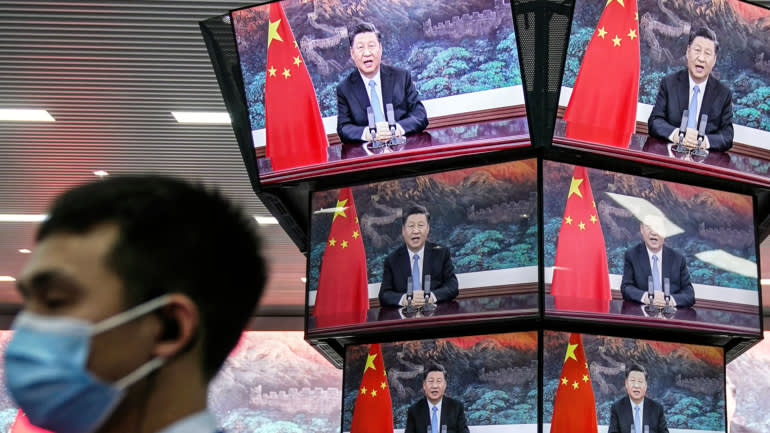 China's recent maneuvers with Japan hint at a strategy of securing a stronger legal position ahead of President Xi Jinping's delayed first official visit to the neighboring country.   © Reuters

Next up are Xi's own visits to Japan and South Korea, once the coronavirus has come under control.

However, the situation surrounding Japan and China remains harsh.

During his trip to Japan, Wang also visited the prime minister's office to meet its new occupant, Yoshihide Suga. They exchanged elbow bumps in front of cameras at the outset of their talks.

But unlike Motegi, the foreign minister, Suga was emotionless. The jovial Wang even waved his right hand to cameras in an effort to give a favorable impression to the Japanese public, but the Japanese leader showed not a hint of a smile.

It was a reversal from the famous November 2014 meeting between then-Prime Minister Shinzo Abe and Xi, as they held their first talks on the sidelines of an Asia-Pacific Economic Cooperation, or APEC, summit in Beijing.

Abe smiled while Xi remained grim-faced during their long-awaited handshake.

Japanese sentiment toward China has deteriorated due to the coronavirus pandemic and Beijing's arm-twisting in Hong Kong, as well as bilateral issues including the repeated incursions into Senkaku waters.

According to the Japanese government, the issue of Xi's eventual visit was not discussed during Wang's stay.

The calendar shows an opportunity for a breakthrough. July 2021 commemorates the 100th anniversary of the founding of the Communist Party, while the Tokyo Olympics will get underway around the same time.

Japan and China in 2022 will mark the 50th anniversary of their normalization of diplomatic ties. It will be an appropriate year for an exchange of visits by top Japanese and Chinese leaders.

But the pandemic lingers. China also enters a hot and bitter political season ahead of the Communist Party's next quinquennial National Congress in the autumn of 2022. Xi's state visit to Japan, which was initially planned for April this year, continues to drift.