Xi Jinping had to move quickly -- while Angela Merkel still held the presidency of the Council of the EU and before Joe Biden's inauguration -- to drive his wedge between Europe and the U.S. (Source photo by Reuters)
China up close

TOKYO -- On the night of Dec. 30, almost all Chinese media outlets sent out alerts about an investment pact agreed to between China and the European Union. Notifications lit up hundreds of millions of smartphones.

After more than six years of negotiations, Chinese President Xi Jinping and European leaders, including German Chancellor Angela Merkel and French President Emmanuel Macron, had reached a key milestone in relations. The China-EU Comprehensive Agreement on Investment, or CAI, was sealed in a video meeting.

What is exciting the Chinese is not the promised economic benefits of the long-awaited agreement, but the strategic victory it symbolizes.

It draws directly from the 14th-century Chinese historical novel "Romance of the Three Kingdoms," in which the strategy of driving a wedge between enemy forces appears time and time again.

In the novel, the countries conduct psychological warfare, take advantage of the weaknesses in an enemy alliance and seek to fish in troubled waters to win without fighting.

In the case of the China-EU investment deal, the three kingdoms are not Wei, Shu and Wu but China, Europe and the U.S. 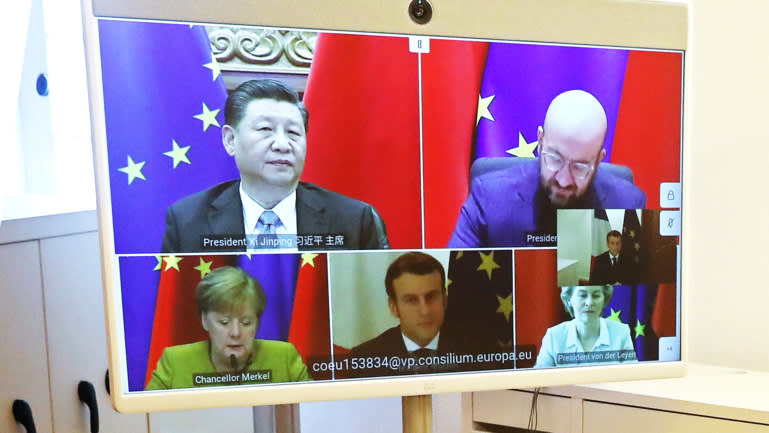 Most of the EU is allied with the U.S. through NATO. The China-EU investment agreement, which came mere weeks ahead of the inauguration of incoming President Joe Biden, alters the dynamic.

The Biden administration expects to repair alliances, including U.S.-European ties that have frayed under President Donald Trump.

Coordinating China policies was supposed to be a key to the U.S. and EU recommitting to each other and going on to influence China, a formidable rival with a different political system.

Jake Sullivan, Biden's national security adviser-nominee, had warned the EU not to rush into the CAI without first consulting the U.S.

Sullivan tweeted on Dec. 22: "The Biden-Harris administration would welcome early consultations with our European partners on our common concerns about China's economic practices."

But his overture came too late; Beijing had already made a significant move.

A day earlier, Wang Yi, China's state councilor and foreign minister, met with the head of the EU delegation to China as well as the ambassadors of the 27 EU countries, conveying China's strong will to quickly conclude the investment pact.

At the time, there were widespread media reports in Europe that the negotiations had hit a deadlock, China having made an unreasonable demand for further market opening.

Wang's unusual summoning of the EU diplomats was aimed at dispelling these reports and to show China's willingness to make a concession. It was clear that instructions were coming from on high. China was determined to clinch an agreement.

Technically, China seems to have made the greater concession. But in the larger picture, the investment agreement helps China avoid isolation in the international political arena.

Moreover, China has driven a big, heavy wedge between Europe and the U.S. ahead of Biden's inauguration.

Symbolically, the CAI was announced on the same day the EU signed a post-Brexit free trade deal with the U.K., opening the way for the latter's complete exit from the EU.

If the U.K., which has close relations with the U.S., had not left the EU, it might have blocked German Chancellor Merkel from moving toward an early basic agreement with China.

From China's perspective, it was imperative to seal the deal before Merkel, a staunch China ally, retires from politics this autumn. Germany held the rotating presidency of the Council of the EU until Dec. 31, the next day.

One element of history that perhaps has been overlooked in this episode is that China's effort to explore stronger relations with Europe began when U.S.-China relations entered a cul-de-sac during the administration of President Barack Obama, in which Biden served as vice president.

An example is Xi's signature Belt and Road Initiative, which calls for the creation of a new Silk Road economic zone linking China and Europe by land and sea. Xi announced the global strategy with fanfare in the autumn of 2013.

It came several months after Xi's visit to The Annenberg Retreat at Sunnylands, California, in June 2013 to meet Obama. Strolling the gardens and sitting on a bench with no ties, the leaders tried to build a comfortable working relationship.

But Xi's proposal to establish a "new type of great power relationship" -- where an established power and a rising power would work together to manage and mitigate the inevitable clash of interests and ambitions -- was rejected by Obama.

Xi's call for an equal relationship, where each side would refrain from interfering in the other side's "core interests," was in effect a demand that Washington give Beijing a free pass on issues such as Taiwan, Tibet and the South China Sea.

Faced with a deadlock, China decided to embark on a new "go west" strategy. It would stop looking to its east, where the U.S. lies, at least for the time being, and focus on building a massive economic zone between China and Europe, the Belt and Road.

It was an attempt to pressure the Obama administration, making it wake up to China's true power. The weight of the new economic zone, spanning Eurasia and Africa and with a combined population of more than 4 billion people, was China's ammunition.

Initially, the go west policy had a phenomenal impact. In March 2015, the U.K. became the first Group of Seven member to declare its participation in AIIB. It was followed by other European countries, including France and Germany. Australia also joined the bank despite objections from the U.S.

Back then, China's relations with many countries were far friendlier than they are now. It was the Obama administration that began to worry about isolation, as it saw one ally after another declare its participation in the AIIB. Xi Jinping opened the AIIB in Beijing, China, on Jan. 16, 2016, to great fanfare. But the lender has been rather quiet of late.   © Reuters

China's ties with Australia, which has called for an independent international investigation into the origins of COVID-19, have sunk to their lowest point. China's border dispute with India has escalated, with the two countries' forces clashing in the northern Indian region of Ladakh.

Influential Chinese scholar Yan Xuetong once frankly explained that the country was in effect "purchasing friendship" by sharing economic benefits with neighboring countries. The Tsinghua University professor's remarks captured the essence of China's diplomacy. They also reflected his confidence that China would be able to win over even NATO countries with economic enticements.

But the other side of that coin is that the end of money is the end of love.

Contrary to its flying start, the amount of investment and lending by the AIIB has experienced sluggish growth, remaining stuck at less than half the initially assumed level.

The AIIB rarely makes global headlines these days. Amid growing alarm over Chinese money and tense relations with the U.S., countries are less enthusiastic about borrowing from the bank.

The China-EU investment agreement was the first bright news from this realm in a long time. 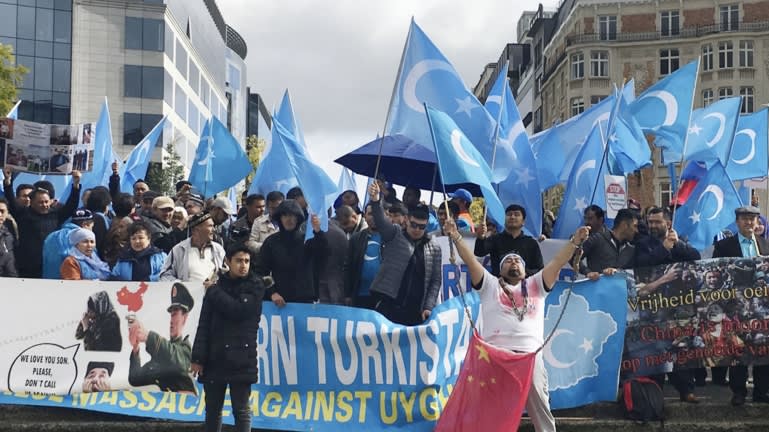 Uighurs in 2018 stage a rally in front of the European Union's headquarters in Brussels to call attention to the deteriorating human rights situation in China.   © Kyodo

However, the CAI is far from a done deal. There could be twists and turns before the investment agreement is formally signed, ratified and put into effect.

The first problem has to do with EU ratification procedures. The pact is subject to approval by the European Parliament, where there is strong criticism of China's alleged human rights abuses against Uighurs as well as the crushing of the pro-democracy movement in Hong Kong.

In fact, the European Parliament in mid-December adopted a resolution condemning forced labor among China's Uighur population. The resolution reflects Europeans' cautiousness about strengthening ties with an increasingly authoritarian China.

As for China, its concession was a promise to seek to ratify the International Labor Organization treaty banning forced labor.

But will it carry through? China has not even confirmed that its Uighur population is subject to forced labor, and it is unclear whether China's promise will help resolve the issue.

At least for the time being, however, Beijing has managed to drive that big, heavy wedge between the U.S. and EU. With the Atlantic Ocean now representing that divide, all eyes now turn to whether China will return its focus to expanding its interests in the Pacific.

This also is reminiscent of the "Three kingdoms" playbook -- psychological warfare that takes advantage of the political vacuum in the U.S.

If China returns to looking east for the first time in seven years, friction with the incoming Biden administration could develop.

The tug-of-war between the 21st century's three kingdoms -- the U.S., China and Europe -- in the post-COVID world will be an epic and riveting tale.