Xi Jinping and Joe Biden are already at odds over Taiwan, with China showing its ability to cut off one of Taiwan's far-flung islands. (Source photos by AP, Reuters and Kyodo)
China up close

Analysis: China tests Biden on Taiwan, with eye on another island

TOKYO -- On Monday evening, as Chinese people were looking at their smartphones, watching their leader Xi Jinping talk about the importance of global cooperation at an online conference hosted by the World Economic Forum, alerts flashed across many screens.

It was an analysis piece by Chinese media, mocking a U.S. State Department statement that urged China to "cease its military, diplomatic and economic pressure against Taiwan."

"Pressure?" the analysis piece asked. "As everybody knows, the People's Liberation Army's combat-readiness flights in the airspace of the Taiwan Strait have become a norm." China needs nobody's permission to decide what and when to fly, it said. The headline called the U.S. statement a "joke."

The timing was symbolic. While the Chinese president was reaching out to newly installed U.S. President Joe Biden for a handshake, China was kicking the Americans under the table. In one of the Biden administration's first important moves on China, the State Department statement urged Beijing to engage in meaningful dialogue with Taiwan's democratically elected representatives, rather than attempt to intimidate its neighbor.

"Our commitment to Taiwan is rock-solid," the statement says.

Xi, who has a relationship with Biden that goes back a decade and has spent many days traveling and dining with him, might have been surprised by the State Department's wording. It included a subtle departure from the U.S.'s traditional stance on Taiwan.

"The United States maintains its long-standing commitments as outlined in the Three Communiques, the Taiwan Relations Act, and the Six Assurances," it says.

The Six Assurances? The inclusion of the set of promises the Ronald Reagan administration made to the Taiwanese in 1982, especially about the continuation of U.S. arms sales to the island, was immediately noticed by China watchers around the world.

The statement made no direct mention of the "one China" policy, which holds there is but one China and that Taiwan is a part of it.

It signaled that Biden was taking a tougher approach on China than did former President Barack Obama, who Biden served as vice president from 2009 to 2017. There was a prelude to the latest U.S.-China clash over Taiwan.

Hsiao Bi-khim, Taiwan's de facto ambassador to the U.S., was formally invited to attend Biden's inauguration on Jan. 20. It was the first such occasion since Washington severed diplomatic ties with the island in 1979.

Hsiao is well-connected in Washington, especially to Biden's Democratic Party, and she is a close confidant of Taiwanese President Tsai Ing-wen. She went to the U.S. to assume the post last year, in accordance with Tsai's wishes.

Not surprisingly, China reacted angrily to the State Department's statement.

On Sunday, another 15 Chinese aircraft flew into Taiwan's air defense identification zone, or ADIZ, according to the island's Defense Ministry.

What is noteworthy is that the Chinese military planes flew between the main island of Taiwan and Pratas Island southwest of it. The island, which sits in a strategic location in the South China Sea, is closer to Hong Kong than to the rest of Taiwan, though it is under Taiwan's control. 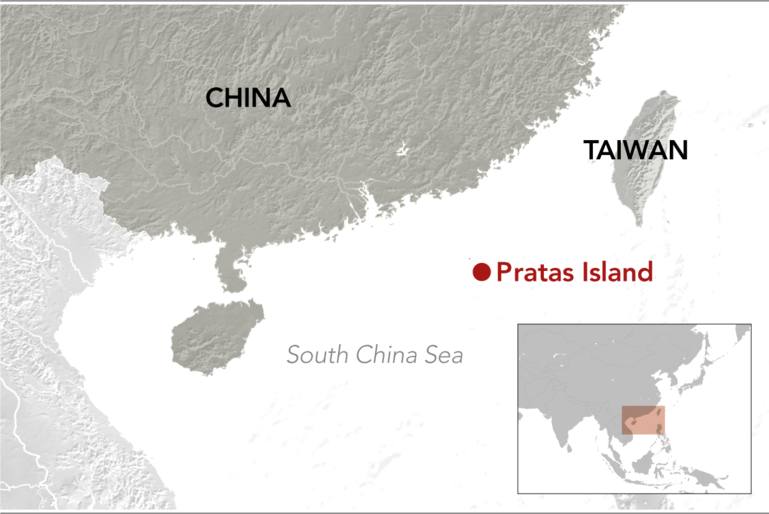 China has deployed an aircraft carrier to its naval base on Hainan Island, farther to the west and facing the South China Sea. The shortest route from that base to the Pacific would take Chinese naval ships through the Bashi Channel, between Taiwan and the Philippines. On the way there, they would pass near Pratas Island.

And it is at Pratas Island where a behind-the-scenes tug-of-war is being played out between the U.S. and China.

One take on the military planes' latest incursions into Taiwan's ADIZ is that they were showing off China's ability to bomb the main island of Taiwan and cut off supply routes to Pratas.

China may also have in mind a surprise attack and occupation of Pratas.

Beijing had hoped that its acrid relations with the U.S. under former President Donald Trump would begin to improve after Biden came to office. A Chinese Foreign Ministry spokesperson had said the two countries could cooperate in many areas with "mutual respect."

Shortly after being sworn in, Biden gave a speech in front of government employees and referred to the conversations he had with Xi during a past visit to China.

Some Chinese media reports described this as a sign that the Biden administration attaches importance to China and represents a departure from the Trump era. But any such atmosphere is dissipating.

White House spokeswoman Jen Psaki has made it clear that the Biden administration will maintain its predecessor's tough line toward China for the time being.

On Monday she was asked whether Xi's speech at the World Economic Forum-organized online conference -- in which he called for cooperation with the U.S. on the coronavirus and other issues -- would affect the U.S.'s stance. She answered, "No." Ships at China's naval base on Hainan Island can make their way to the Pacific by sailing past the Pratas Islands, then navigating between Taiwan and the Philippines. (File photo)    © Kyodo

"I think our approach to China remains what it has been since -- for the last months, if not longer," she added. "We're in a serious competition with China. Strategic competition with China is a defining feature of the 21st century. What we've seen over the last few years is that China is growing more authoritarian at home and more assertive abroad. And Beijing is now challenging our security, prosperity and values in significant ways that require a new U.S. approach."

Psaki notably used the term "strategic patience," which the Obama administration used for North Korea, to describe the way ahead with China. "We want to approach this with some strategic patience," she said. "We wanted to engage more with Republicans and Democrats in Congress to discuss the path forward.  And most importantly, we want to discuss this with our allies."

On Jan. 17-18, a week before Psaki's comments, Chinese officials in Beijing held a meeting on Taiwan policy. In an apparent warning to the U.S., Wang Yang, chairman of the Chinese People's Political Consultative Conference, told the meeting that China "will not allow any individual or force to separate Taiwan from China in any way."

China has also made some not-so-subtle vocabulary changes. The meeting did not propose a "peaceful unification" with Taiwan or implementing a "one country, two systems" for the island if they were to be unified.

The ditching of the "one country, two systems" comes after the principle became a sham in Hong Kong as Beijing enforced a new national security law on the territory. But the principle was originally proposed by China as a model for its peaceful unification with Taiwan.

The omission of "peaceful unification" in regard to Taiwan naturally hints at something else, unification by force.

By dropping the hint, Beijing is pressuring Taiwan and testing the Biden administration's resolve.

The U.S. needed to respond. If Washington had stayed silent, it could have sent the wrong signal, leading China to believe the Biden administration may be hesitant to take action even if China made military maneuvers against Taiwan." Only six years ago, Xi held a historic summit with then Taiwanese President Ma Ying-jeou of the Kuomintang (Nationalist Party) in Singapore.

In his World Economic Forum speech, Xi issued a warning to the U.S.

"To build small circles or start a new Cold War," he said, "to reject, threaten or intimidate others, to willfully impose decoupling, supply disruption or sanctions, and to create isolation or estrangement will only push the world into division and even confrontation."

But there is an actual new Cold War between the U.S. and China, and it is complicated. Taiwan makes up one of its fronts.