President Xi Jinping is touting that China has become "the only major economy with positive growth this year." (Nikkei montage/Getty Images/Reuters)
China up close

TOKYO -- When it comes to statements issued after key meetings of the Chinese Communist Party, what is not written -- especially what has been deleted from previous statements -- often carries much more significance than the complex language that remains.

This year's Central Economic Work Conference offers a good example. It was held Dec. 16-18 to discuss China's economic management in 2021. In a statement released afterward, concern that the Chinese economy could face greater "downward economic pressure" had disappeared.

A year has made a big difference. At the previous Central Economic Work Conference, which began on Dec. 10, 2019, Chinese President and party General Secretary Xi Jinping issued a warning using those words.

Looking back, the conference was held weeks before the outbreak of the new coronavirus began to terrorize the global economy. Two days before the meeting, the first virus patient in Wuhan, Hubei Province, began showing symptoms, according to Chinese authorities. As it began to unfold, however, Chinese citizens and people around the world were left in the dark about the outbreak. Information did not surface, at least not widely, for a while.

It was not until mid-January that the seriousness of the outbreak began to be discussed. Then, on Jan. 20, the head of a Chinese government's expert team finally declared there was no doubt about "human-to-human transmission."

Xi's warning of "downward economic pressure" at last year's gathering came before it was possible to predict the economic damage that the coronavirus outbreak would wreak.

A year later, and despite China and the world going through a historic bout of economic turbulence, Xi made no mention of and ignored any "downward economic pressure." True, the Chinese economy is recovering, but something seems off.

It hints at Xi's desire to declare to the world that China has become "the only major economy with positive growth this year," as the Central Economic Work Conference statement put it.

In China, the country's fight against the virus and its success in fending off the outbreak's economic effects are already regarded as a part of history Chinese can be proud of. There is even a virus-themed exhibition being held in Wuhan.

The gap between Xi's confidence and the world's grim reality is glaring.

When the party in 2019 talked of downward economic pressure, the biggest factor weighing on the Chinese economy was the impact of the country's fierce economic confrontation with the U.S. and President Donald Trump.

The 2019 Central Economic Work Conference came one month before Vice Premier Liu He, a close aide to Xi, flew to Washington and signed the "phase one" trade deal.

By the time the conference was held, Xi had endured months of wrangling with the U.S. in negotiations that at one point produced a draft agreement that Beijing later decided to scupper itself.

Tragically, in Wuhan that day, the outbreak was giving way to crisis.

Then-unimaginable coronavirus-related nightmares would go on to play out around the world. Trump, who leaves office in less than a month, failed to cope with the outbreak, allowing it to ravage the U.S. So far, the virus has killed more than 322,000 people in the country.

No "phase two" trade deal is on the horizon. The U.S. was looking forward to round 2 as an opportunity to pressure Beijing into tackling hefty industrial subsidies and other structural issues.

China's eventual success in halting the virus's spread -- as well as the trade negotiations being thrown into limbo -- seems to have provided a respite to China and Xi himself.

The Trump administration, however, continues to ramp up pressure. On Friday, it added dozens of Chinese companies, including Semiconductor Manufacturing International Corp., a leading contract chipmaker, and DJI Technology, the world's biggest consumer drone producer, to its trade blacklist.

This year's Central Economic Work Conference statement used an unfamiliar term to describe the macroeconomy's direction -- sharp turns -- as in there will not be any.

This suggests that the world's second-largest economy will maintain the status quo, that monetary policy will be neither further loosened nor tightened. SMIC and DJI are among the latest Chinese companies to be put on a U.S. blacklist. (Source photos by Masayuki Terazawa and AP)

In 2008, after the collapse of Lehman Brothers, the party talked of growing downward economic pressure.

The current pandemic has dealt a far bigger blow to the global economy than Lehman did 12 years ago. Nevertheless, China's leader is staying away from that phrase.

His reticence is, in effect, a message to the Chinese people: Grow confident.

But at the end of the day, despite Xi's bravado, it will probably be the coronavirus that ends up affecting his political fortunes in the coming year.

Even if China largely succeeds in controlling the virus at home this winter, that alone will not improve the country's overall economy as many of the nations that buy China's exports are still taking an economic beating.

Meanwhile, China finds itself in a chilly international political environment.

A survey conducted this past summer by the Pew Research Center shows negative views of China at record highs in nine countries -- the U.S., U.K., Germany, South Korea, Australia, Canada, Spain, the Netherlands and Sweden.

The results show China's strategy to improve its external image has failed.

Beijing has not helped itself by taking hard-line stances in the past few years, like introducing the highly controversial Hong Kong national security law earlier this year and initially remaining mum about the coronavirus outbreak. 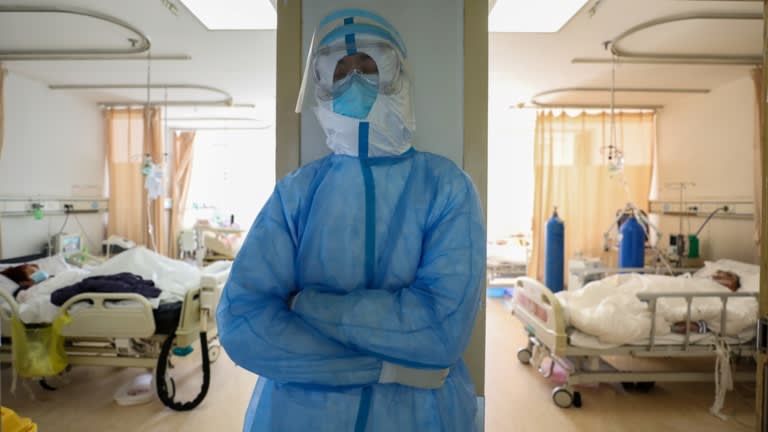 In China, the country's fight against the virus and its success in fending off the outbreak's economic effects are already regarded as a part of history Chinese can be proud of.   © Reuters

Suspicion of China has also been fueled by a significant delay in the country's acceptance of a full-scale team from the World Health Organization to investigate the origins of the coronavirus in Wuhan and elsewhere. As things stand now, the WHO investigative team is to arrive in China in January, more than a year after the first coronavirus case was confirmed.

Wuhan citizens' lives have since returned to normal, and vaccinations are underway in some parts of the world, but a full-scale international probe into the origins of the pandemic has yet to begin.

For Xi and China, 2021 is to be a special year. July will mark the 100th anniversary of the party's establishment. Before facing such a big moment, Xi will want to portray China's success in halting the virus's spread as the biggest accomplishment of his nine years in power.

If it truly were such a success, logic would have it that other countries around the world would be singing China's praises. That is not the case.

There are high hopes that the world will go back to normal in 2021. But if the world does not fully emerge from the coronavirus crisis by summer, there will be repercussions, including a significant impact on how the Tokyo Olympics will be staged.

The contrast of a world struggling to control a pandemic that originated in China and a Chinese Communist Party patting itself on the back for its response to the same crisis as a way to celebrate its 100th anniversary will only spark new frictions. Brace for a rough 2021.