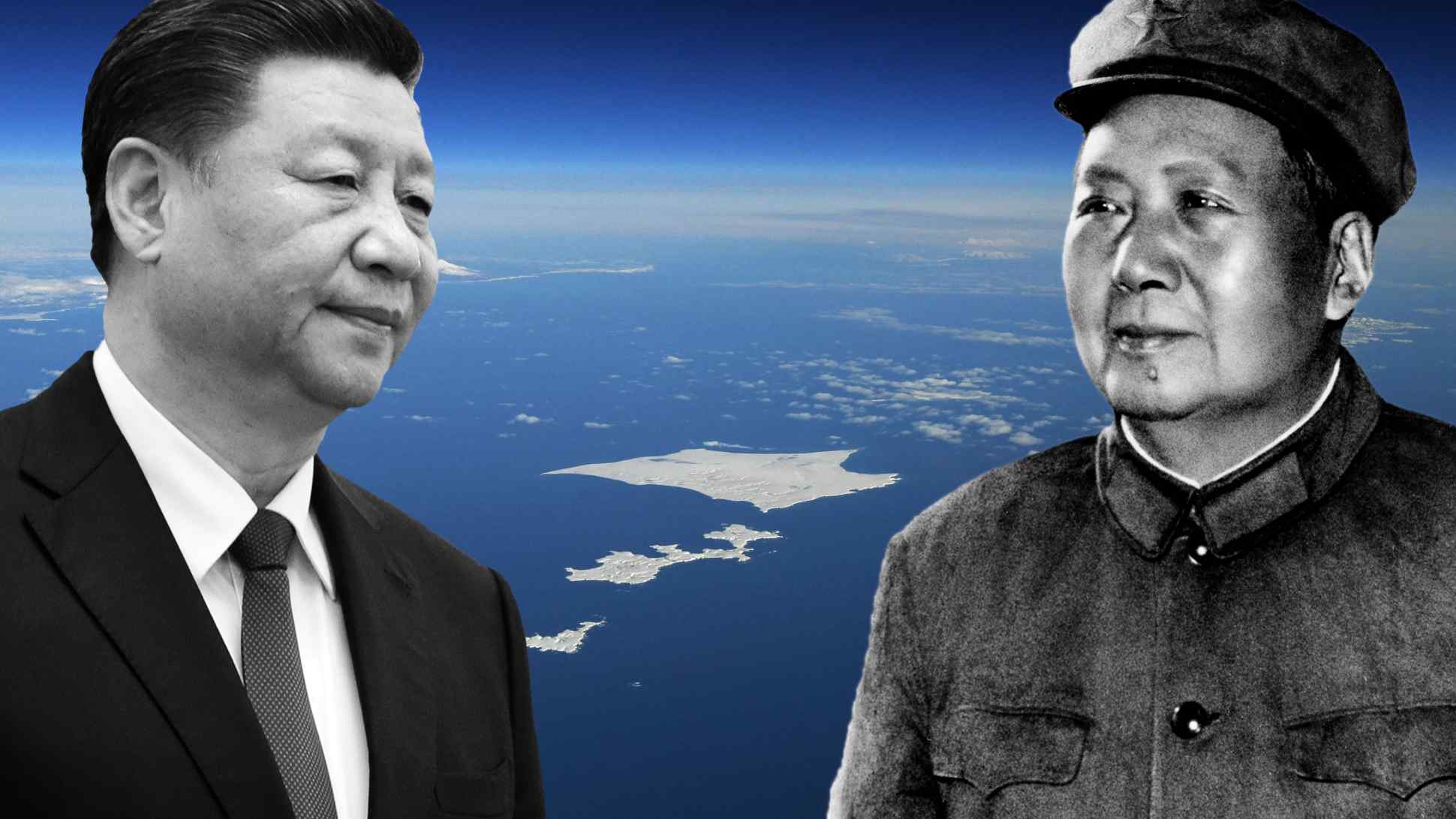 Back in 1964, just before the first Tokyo Olympics, Mao Zedong came out in support of Japan over its territorial dispute with the Soviet Union. Now Xi Jinping sees few benefits to siding with Tokyo. (Source photos by AP, Reuters and Kyodo)
China up close

TOKYO -- China does not relax its diplomatic muscles even during the celebratory mood of the Tokyo Olympics.

At issue are remarks by Zhao Lijian, a Chinese Foreign Ministry spokesperson and a known "wolf warrior diplomat."

During a news conference on July 27, Zhao signaled a subtle but unmistakable shift in Beijing's stance on the long-standing Japan-Russia dispute over four small islands that Tokyo calls the Northern Territories.

Zhao was asked about a protest lodged by the Japanese government against Russian Prime Minister Mikhail Mishustin, who the previous day visited one of the disputed islands, known as Etorofu in Japan and as Iturup in Russia.

In line with China's traditional stance on the territorial row, Zhao replied, "I have noted relevant reports. This is a bilateral issue between Russia and Japan and should be properly handled by the two sides." Russian Prime Minister Mikhail Mishustin visits an island between Hokkaido and the Kamchatka peninsula on July 26, reigniting the territorial dispute with Japan.   © AP

But he went on to add what appeared to be a pro-Russia tint. "At the same time, it is China's consistent belief that the outcomes of the victorious anti-fascist war should be earnestly respected and upheld," he said.

"The Chinese Foreign Ministry's latest view is inconsistent with how the Northern Territories are rendered on the government-sanctioned map," one diplomat said. "What on earth is China going to do?"

Russia often cites "the results of the victorious war against fascism [World War II]" to legitimize its de facto control of the islands, which were occupied by Soviet troops in the days immediately following the end of World War II.

By insisting "the results be respected," China suggests that it now accepts the Russian argument, albeit indirectly.

Zhao's remarks came in response to a question by a reporter from the Global Times, an international-focused newspaper affiliated with the People's Daily, the mouthpiece of the Chinese Communist Party. 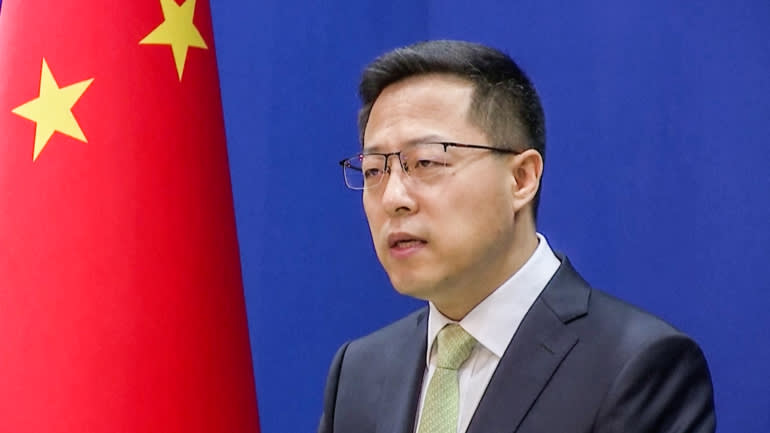 Zhao Lijian on July 27 signals a subtle but unmistakable shift in Beijing's stance on the Northern Territories, known as the Southern Kurils in Russia.   © CCTV/Reuters

The Global Times reporter also asked about a proposal to establish a special economic zone free of customs duties on the disputed islands to attract foreign investment there.

The paper published an article on its official WeChat account saying "it is clear which side China supports in the Japan-Russia territorial dispute." The article noted that a delegation of Chinese corporate executives visited Etorofu in 2018 and considered joint projects in tourism and aquaculture.

The article ends by saying that if Japan continues to "interfere in China's internal affairs such as Taiwan and the Xinjiang Uyghur Autonomous Region," Chinese companies "will take an even bigger step, in lockstep with Russia." The article -- with the headline "China will join the development of the Southern Kuril Islands in due time" -- has been widely reposted.

What the Chinese government does not say directly is deftly explained in the article, which includes Beijing's talking points designed to fortify the country's global propaganda campaign.

The Chinese move comes as Japan enhances cooperation with the U.S. administration of President Joe Biden over Taiwan. In its annual defense report released in mid-July, Japan directly connected stability in the Taiwan Strait to its own security for the first time, sounding the alarm at Chinese military activities around Taiwan.

"Stabilizing the situation surrounding Taiwan is important for Japan's security and the stability of the international community," said the 2021 Japanese white paper on defense.

China's pro-Russia shift over the Northern Territories seems aimed at warning Tokyo not to interfere on Taiwan.

Meanwhile, China and Russia, seen as a quasi-alliance by some, are planning joint military exercises Aug. 9-13 in China's Ningxia Hui Autonomous Region. Recent moves by Beijing seem partly out of consideration toward Moscow.

But China's map still shows the four disputed islands as "being occupied by Russia" in parentheses. The Japan-Russia border is drawn between Etorofu and Urup Island, as claimed by the Japanese government.

This also can be confirmed in map search results on Chinese internet giant Baidu's website. They reflect how the four disputed islands must be rendered on maps, approved by the National Administration of Surveying, Mapping and Geoinformation. Maps accessible via search engine Baidu reflect how the four disputed islands must be rendered in China, as approved by the country's mapping administration. (Screenshot from Baidu's website)

The mapping administration is under the jurisdiction of the Ministry of Land and Resources. China is now making an implicit threat that Beijing can change its map regarding the four disputed islands at any time.

But that's easier said than done.

China has a long history of supporting Japan's stance on the island dispute. Beijing's support traces to founding father Mao Zedong's vow made long before the 1972 normalization of Sino-Japanese diplomatic ties.

Nikkei published an article on the front page of its July 13 edition in 1964 -- shortly before the last Tokyo Summer Olympics held that year -- saying that Communist Party Chairman Mao Zedong "supports the return [to Japan] of the Southern Kurils [the Northern Territories]."

Mao met with a visiting delegation of Japan Socialist Party members, including Kozo Sasaki, on July 10, 1964. When asked what he thought of the Japanese opposition party's demand for the return of the disputed islands, Mao made clear China's support for Japan.

"As the Soviet Union has taken too much territory, I support its return of the Southern Kurils to Japan," the article, with a Hong Kong dateline, quoted Mao as saying.

Okada said, "Zhou Enlai [then China's premier] said Chairman Mao's remarks supporting in principle Japan's demand for the return of the territory are not out of temporary strategic consideration to Japan but are China's consistent political position." 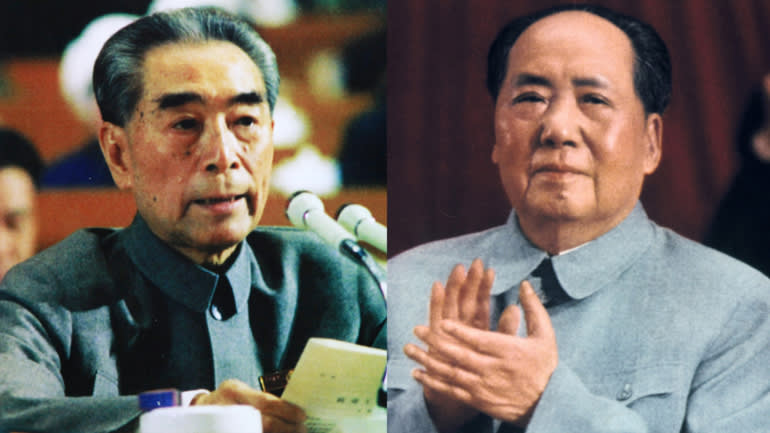 Zhou Enlai, left, China's first premier, and Mao Zedong cheered Japanese leaders in 1964 by coming out in favor of the Soviet Union returning the disputed islands to Japan. (Source photos by AP and Getty Images)

China apparently was concerned about some punditry that emerged in Japan suggesting that Mao's remarks were a "mere reflection of China's strategic consideration toward Japan."

The People's Republic of China did not attend the 1964 Tokyo Summer Olympics, which opened on Oct. 10 that year, as it had no diplomatic ties with Japan at the time. The Chinese team makes its appearance at the Tokyo Olympics opening ceremony on July 23, 2021. The People's Republic of China did not attend the first Tokyo Games 57 years ago. (Photo by Rie Ishii)

On Oct. 16, 1964, six days after the opening of the Games, China conducted its first nuclear test in the Xinjiang Uyghur Autonomous Region, declaring itself the sole nuclear power in Asia.

And on the previous day, Nikita Khrushchev, first secretary of the Communist Party of the Soviet Union and the country's premier, was ousted from power -- to the delight of Mao. Khrushchev's downfall sparked cheers in Beijing, with many calling it "a great victory in the [Chinese] struggle against [Khrushchev's] revisionism."

Behind the pomp and circumstances of the 1964 Tokyo Olympics, a political storm was brewing around the China-Soviet standoff. Taking cues from supreme leader Mao, the People's Daily repeatedly published articles criticizing the Soviet Union's hegemony, showcased in its occupation of the disputed islands off northeastern Hokkaido in Japan.

In a parallel development, Japan and China began to move toward the normalization of diplomatic ties in 1972. Beijing's desire to counter the Soviet Union also led to China's historic decision to normalize diplomatic relations with the U.S.

But the collapse of the Soviet Union at the end of 1991 changed the calculations of China and Russia. The two countries moved toward strategic cooperation with a focus on advancing their own national interests.

Siding with Japan in its territorial dispute with Russia now offers few benefits to China. The fierce face-off between the U.S. and China also affects Beijing's thinking.

Fifty-seven years have passed since Mao declared China's support for the return of the islands to Japan. Is Chinese President Xi Jinping, who hopes to attain the unshakable leadership status that Mao enjoyed, going to undo his decision -- again in the year of a Tokyo Summer Games? Vladimir Putin and Xi Jinping appear to have found a common cudgel to use against Japan: Moscow's territorial dispute with Tokyo.   © Reuters

In 1964, Zhou Enlai felt the need to explain that Mao's historic decision was "not out of temporary strategic consideration to Japan." If Xi reverses that momentous decision, China's global map will return to what it was during the China-Soviet Union honeymoon period in the 1950s.

Such a turning point in Sino-Japanese relations that have developed over the past 50 years will affect not only the Asian neighbors, but also Japan's top ally, the U.S.