TOKYO -- At the end of every year, as China prepares for the coming 12 months, people get a glimpse of President Xi Jinping's magnificent office. Surrounded by mahogany shelves packed with books, the leader speaks into the camera, reflecting on the wonderful year that has passed.

The office, like those of many global CEOs, is decorated with photographs of family and memorable places he has visited.

The difference is that these photos are carefully chosen and strategically arranged, all in concert to portray a certain image.

Some have been there since Xi's first year in office, such as the photo of him helping his father, Xi Zhongxun, in a wheelchair. This year's new crop of photos includes scenes from Xi's visit to regions across China as well as some scenes from memory lane, such as he and his wife, singer Peng Liyuan, posing before the Great Fountain at Beijing's Old Summer Palace, when both were much younger.

One innocent-looking photo among the collection, however, holds the key to understanding why for nearly a year China has refused to accept a full-scale field investigation into the origins of COVID-19.

On a bookshelf to his left-hand side, as he read out his 2021 New Year's address on Dec. 31, was a photo showing Xi surrounded by boys and girls from the Wa ethnic minority in Southwest China's Yunnan Province. Clad in red traditional clothing, the children sing a song and wave the leader goodbye in Tengchong on Jan. 19, 2020. The city was one of the stops during Xi's inspection tour of the province.

At first glance, it looks like any other heartwarming photo of Xi conducting a local inspection tour. But the key is the date, Jan. 19, 2020. Xi on this day was in Yunnan Province, nearly 3,000 km from Beijing.

At 6 p.m. the following day, Xi, from Yunnan, issued his first important order to Chinese officials to deal with the spread of a novel coronavirus.

It was also on Jan. 20 that an authoritative Chinese medical expert who had played a key role in the fight against the outbreak of SARS in the early 2000s for the first time admitted that the new virus was spreading "human to human."

While the virus that causes COVID-19 was spreading at a breakneck speed in and around Wuhan and beginning to reach beyond the country, Xi was not in Beijing.

The president had visited Myanmar on Jan. 17-18, moving on to nearby Yunnan Province, where he enjoyed the festive mood ahead of Chinese New Year for three nights.

In retrospect, this was a crucial time frame in which China could have prevented the virus from spreading to the rest of the world. But Xi was away for five days, and it was not until Jan. 21 that he finally returned to the capital.

The first case of the novel coronavirus in Wuhan is said to have emerged in early December 2019. The Chinese government locked down the central Chinese city last Jan. 23, and the World Health Organization declared the outbreak a global health emergency seven days later.

Hypothetically, if a WHO probe into the origins of COVID-19 makes clear that the coronavirus did indeed start in China, it will inevitably highlight the Chinese leadership's failure to take effective measures for nearly two months.

Until that first order from Xi on Jan. 20, the Chinese government had not acknowledged the likelihood of human-to-human transmission.

China's biggest diplomatic mission of the past year, therefore, was to fend off any international argument that the country was responsible for a pandemic that is still roiling the world.

"Wolf warrior diplomacy" was deployed, including unprecedented pressure on Australia in response to that country's call for an independent international investigation into the origins of the virus.

Finally, on Thursday, after a year of foot-dragging, China is set to receive a WHO investigative team.

The photo with the Wa children in Yunnan was, of course, placed there for another reason.

It is the first to be shown among this year's photos on a China Central Television interactive webpage. The second one shows Xi visiting a border military camp in Yunnan that same day. 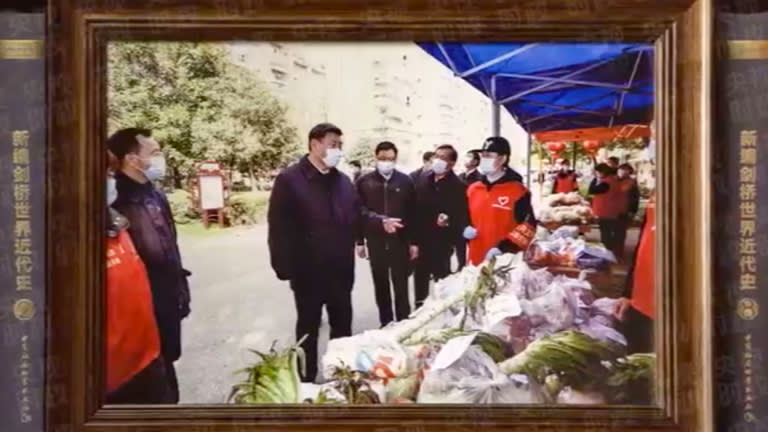 Xi points out vegetables on sale on the side of a street in Wuhan on March 10. (Image captured from CCTV interactive page) 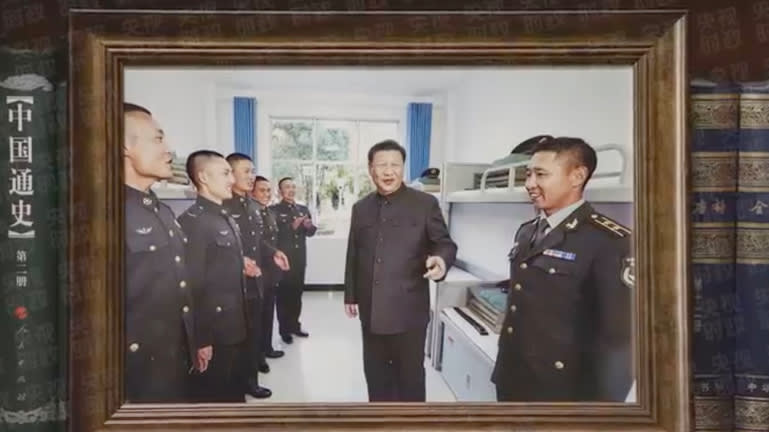 This image captured from a CCTV interactive page shows Xi visiting a border military camp in Yunnan Province on Jan. 19, 2020.

These Yunnan inspection photos showcase one of Xi's most important achievements of 2020: the eradication of poverty in remote areas and the improved livelihoods of ethnic minorities. And China's history imbues them with significant meaning.

They are also just as important as the next photo, which shows Xi inspecting Wuhan, the epicenter of the pandemic, on March 10. That photo is there to highlight another achievement of 2020: the triumph over the scourge of the coronavirus.

Surrounding himself with ethnic minorities was a favorite ploy of Mao Zedong, the founding father of communist China.

At an art exhibition held in Beijing in 2019 to commemorate the 70th anniversary of the People's Republic of China's foundation, a painting titled "The Great Unity of the Nation" was on display, depicting Mao surrounded by jubilant people from various ethnic groups.

Xi's placing of the photo of the Wa boys and girls draws heavily from the Mao playbook. It was also essential that it be in Xi's office at the beginning of 2021, the 100th anniversary of the Chinese Communist Party, as Xi seeks to follow in Mao's footsteps to become "president for life." One page in Mao Zedong's playbook calls for depicting a leader surrounded by jubilant people from various ethnic groups. (Photo by Ken Kobayashi)

But the political significance of the photo is for domestic consumption only.

For the countless people suffering and fearing COVID-19 around the world, that and the other Yunan photo are symbols of China's failure in its initial response to the coronavirus outbreak.

Wuhan is a city of 11 million people, about 5 million of whom at the time were leaving the city for domestic and overseas vacations ahead of Chinese New Year.

Together with people in other parts of the country who may have had contact with them, hundreds of thousands of people left for Europe, the U.S., Japan and the rest of Asia.

The tricky feature of this virus is that infected people with no noticeable symptoms can spread it to others. Millions of seemingly healthy tourists traveling around the world may have been the precursor to a disaster.

If China had banned overseas travel by the end of 2019, or during the first half of last January at the latest, it might have been possible to considerably slow the pace of virus's spread.

The WHO is not without blame.

At an emergency committee meeting held on Jan. 23, 2020, the agency did not declare the outbreak a global health emergency. At the time, the WHO concluded that it was too early to issue such a declaration, based on information received from China. Person-to-person transmission, the WHO concluded, is mainly among family members and medical staff, and not quite at the stage of a global threat.

Looking back at the timeline, it was not until Jan. 21 that Xi returned to Beijing from Yunnan. If the WHO had declared a global health emergency at this stage, before Xi fully took the reins of China's counter-coronavirus efforts -- and based on information received from China while Xi was absent -- the Chinese leader would have lost face.

That was something China wanted to avoid. But the WHO's misjudgment allowed other countries let their guard down, and the situation grew much worse in the ensuing months. WHO Director-General Tedros Adhanom Ghebreyesus has always paid consideration to China. But earlier this month, when the team of investigators was being kept from arriving in China, even he grew frustrated, saying he was "very disappointed" by Beijing.

The high political barriers that had been standing in the way of the WHO investigation were built out of alarm that a probe could shed light on the leader's absence from Beijing in the pandemic's initial days. There is also a theory that the first coronavirus case in Wuhan actually may have emerged much earlier than the beginning of December 2019, as the Chinese government claims.

The political barrier was recently on display when Chinese Foreign Minister Wang Yi gave an interview to Xinhua News Agency and China Media Group, which was published on Jan. 2.

"We raced against time and were the first country to report cases to the world," Wang said. "More and more research suggests that the pandemic was likely to have been caused by separate outbreaks in multiple places in the world."

Pandemic origins do not fall under the jurisdiction of foreign ministers; they are scientific matters, not diplomatic ones.

With the WHO's team yet to begin its investigation, China is trying to set the parameters for what it can conclude.

Coincidentally, Yunnan provides large habitats for bats said to harbor a virus whose genome sequence is similar to that of the novel coronavirus. WHO experts have pointed out that a field investigation in Yunnan and elsewhere is crucial to finding the origins of the pandemic.

Xi declared in March that the origins should be sought scientifically. Let's hope he stays true to his word.