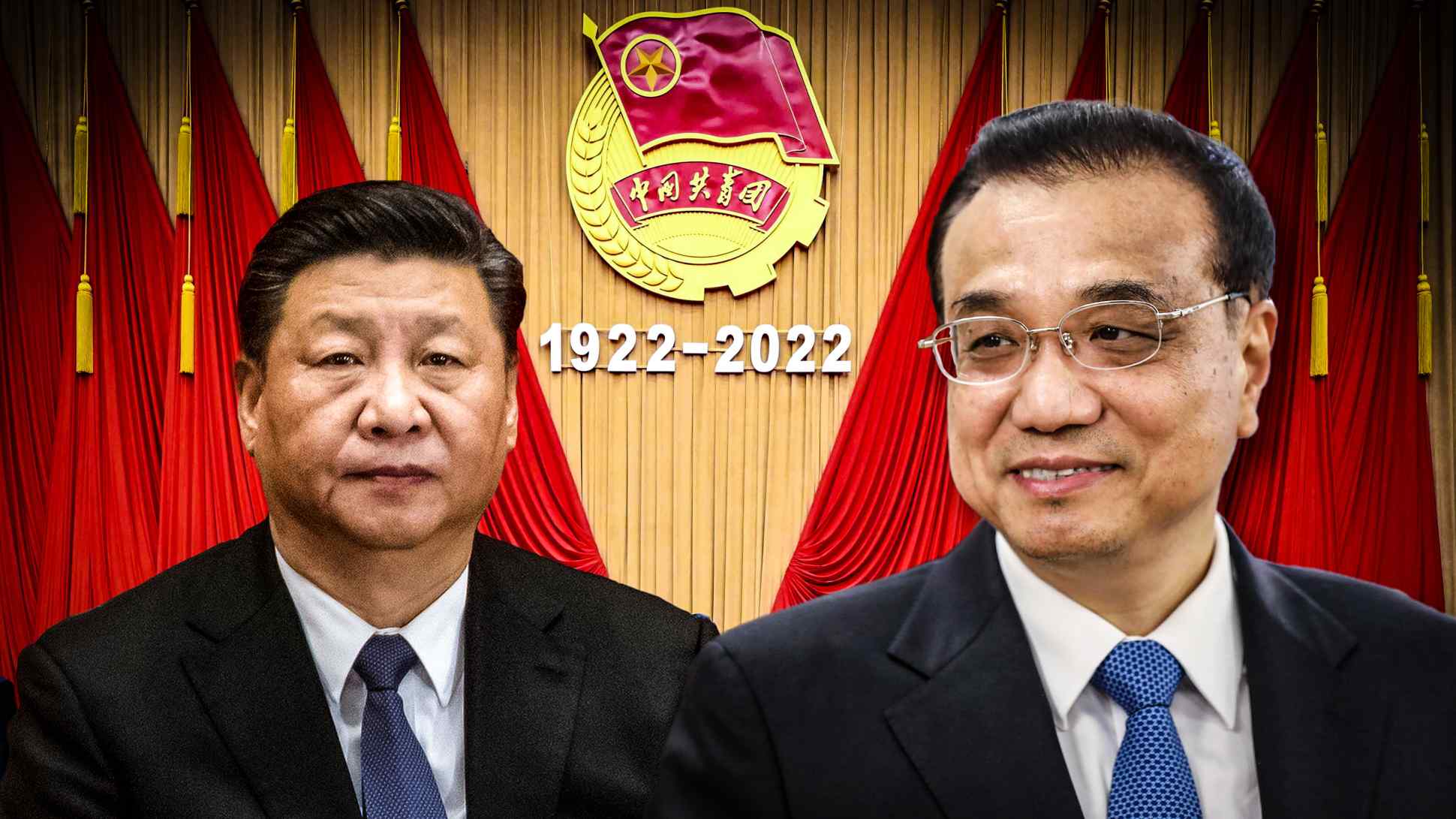 Chinese President Xi Jinping, left, has sidelined Premier Li Keqiang for most of the past nine years, taking over economic policy. (Nikkei montage/Xinhua/Kyodo/AP)
China up close

Analysis: Premier Li is back, and so is 'Likonomics'

Premier Li Keqiang's recent sudden comeback to power is the talk of the town in China.

China's premier is traditionally responsible for macroeconomic policies, as the head of the State Council, China's government. But President Xi Jinping has concentrated power in his hands, and for the past nine years, Li's authority was in name only.

But the dynamics have changed, dramatically, over the past month.

Members of the Chinese Communist Party were astonished on Saturday morning as they turned the pages of the People's Daily, the mouthpiece of the ruling party. On Page 2 was the full text of a speech delivered by Li three weeks prior.

The impact was not so much the content of the premier's words at the April 25 conference on clean politics, but the 10,000-character space the speech was given in the official paper. 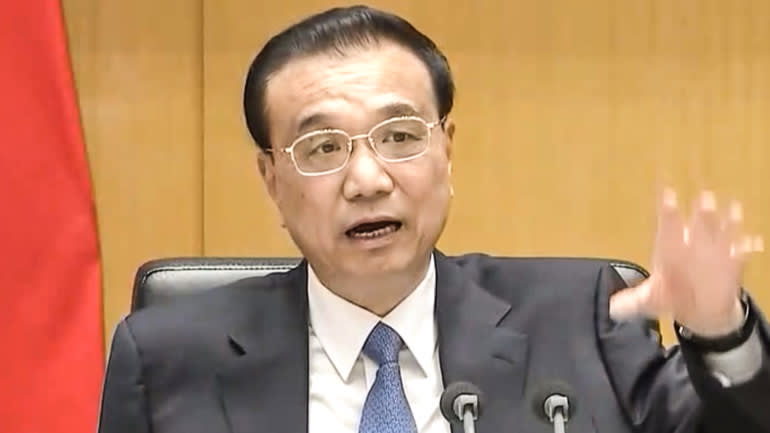 Li speaks at the State Council’s work conference on clean politics on April 25. (Screenshot from CCTV)

In terms of content, Li spoke of lean politics -- in line with Xi's major policy of eradicating corruption. But a careful look shows several interesting elements of Li's speech.

Almost throughout his speech, Li spoke about the economy: measures to rebuild it, a commitment to market mechanisms, reducing tax burdens, supporting small and medium-size companies and creating jobs.

These were the pillars of "Likonomics," the term created at the beginning of this regime to describe Li's priorities. Since then, Likonomics had been in effect shelved as Xi took the reins of the economy. But the April 25 speech signaled that Li's economic playbook was back in full swing.

Most notable was this sentence: "Advancing economic and social development is the basic responsibility of governments at all levels and also an essential requirement for improving party conduct and building a clean government."

Li, the premier, was even talking about how to run the Communist Party. This was stepping into Xi's prerogative.

"The premier stressed the need for greater efforts to oppose pointless formalities, bureaucratism, hedonism and extravagance, with a particular focus on the first two problems," Xinhua reported after the meeting. 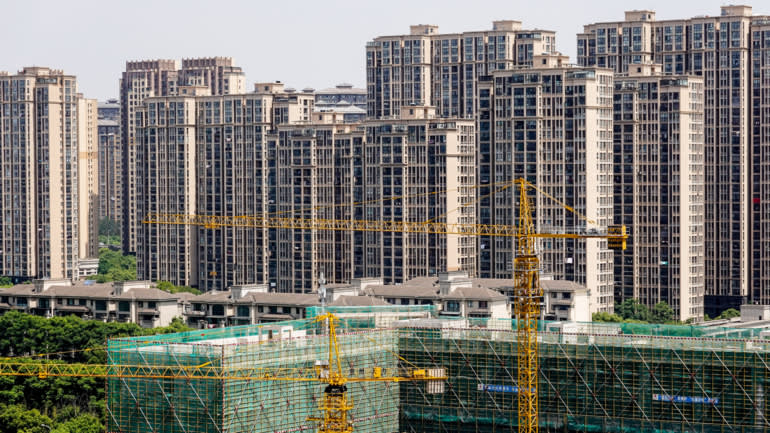 China's economic slowdown in April was shocking to many.   © AP

Another noteworthy point in the speech is that Li made almost no mention of Xi's signature zero-COVID policy despite it having been reaffirmed at a recent meeting of the Politburo Standing Committee, the party's top decision-making body.

That may be related to China's economic performance in April, which was stunningly bad. Industrial production and retail sales both shrank on a year-on-year basis, not only due to zero-COVID, but also linked to the crackdown on tech enterprises, property-related companies and tutoring schools, which were launched one after another at Xi's initiative.

If the recent series of developments is analyzed politically, it is natural to think that there have been some important changes within the party since April, when the Chinese economy clearly lost steam.

The People's Daily's coverage of Li hints at a shift in economic policymaking -- from Xi's one-man rule to one with the premier in the driver's seat. At the least, it is safe to say that there will be more policy coordination in the future.

However, Xi is not stepping aside quietly. In what is widely seen as a counterattack, the National Development and Reform Commission, headed by one of Xi's closet aides, He Lifeng, launched a new magazine titled "Study on Xi Jinping's economic thought."

By framing the economy as part of Xi's "thought," the NDRC is signaling that Xi is in control of the new era as a whole. Xi, center, at a ceremony marking the 100th anniversary of the Communist Youth League at the Great Hall of the People in Beijing on May 10.   © Xinhua/AP

Meanwhile, Xi's henchmen applied pressure on an event to commemorate the 100th anniversary of the Communist Youth League, the power base of Li and his mentor, former President Hu Jintao.

The organization had its heyday in the Hu era. The former president served as first secretary of the Youth League, the league's top post, as did Li several years later.

But the league's fortunes took a turn for the worse and its darks days began when Xi became China's top leader.

Symbolizing the league's current misfortune was the lackluster atmosphere at the 100th anniversary event on May 10. 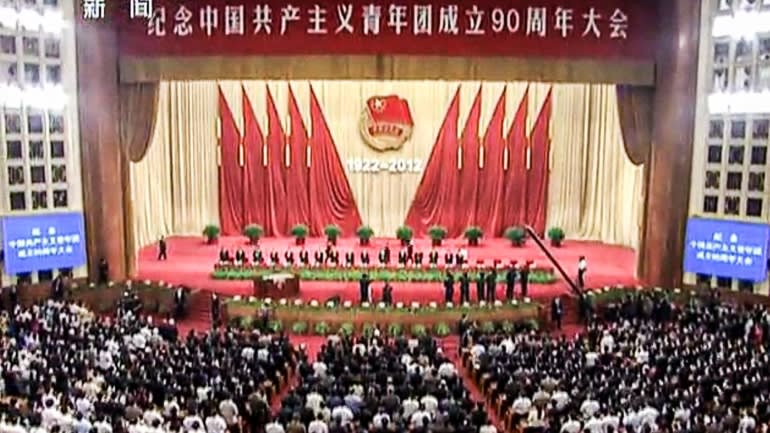 The 90th anniversary of the Youth League was celebrated in the Great Auditorium of the Great Hall of the People in May 2012. (Screenshot from CCTV)

Delivering a speech at the 100th anniversary, Xi stressed the importance of "struggle" in front of young participants and said, "The Communist Youth League would not have taken shape without the Communist Party of China."

He Junke, the current first secretary of the Youth League, lavished praise on Xi, saying that China will continue to advance toward "the great rejuvenation of the Chinese nation" as long as the country is steered by Xi.

The Youth League's decline also appears in the numbers. Membership has fallen sharply after years of steady growth until the era of Hu Jintao. Then-President Hu Jintao attends the 90th anniversary of the Communist Youth League in May 2012. (Screenshot from CCTV)

The number of Communist Party members rose by a little more than 10 million during the same period.

The big drop is largely due to the strict application of a rule requiring those who have reached the age of 28 to leave the league, except for executive members.

Some Communist Youth League members had often stayed in the league until the age of 35. But either way, that itself does not explain the fall of as many as 16 million during the nine-year period.

The league's influence has also declined. In 2016, the Xi administration announced severe reform plans for the Youth League's Central Committee, slamming what it said were the committee's four big problems, including being "aristocratic" and focusing on "entertainment."

The expression "focusing on entertainment" meant that the league was not functioning properly as an organization. For Xi, who is one of the "second-generation reds," or children of revolutionary-era party leaders, the huge league is a rival group with political power.

Premier Li's resurgence and the cold shoulder given to league's centenary event are two conflicting tides within the party. They are thought to reflect the political tug-of-war taking place toward the Communist Party's next national congress this autumn.

Li has publicly said this is his last year as premier. But there is a chance he will assume a considerably important post for five years after the party's upcoming national congress. This is because Li, 66, will not have reached the retirement age of 68 by this autumn.

It will be a big deal for Xi, who has so far enjoyed unchallenged rule. He could technically remain the party's general secretary but be leader in name only, if he plays his cards wrong.

For Xi to continue as an unrivaled leader, he has to win his political battles. History tells us that serious developments always happen in the run-up to the party congress.