So said the new Japanese Prime Minister Yoshihide Suga on Monday, as he addressed the students of the Vietnam-Japan University in Hanoi.

In a speech titled "Building together the future of Indo-Pacific," Suga repeated the phrase "rule of law" five times and said "developments contrary to the rule of law and openness" have been unfolding in the South China Sea.

It was clear who he was talking about. Suga, on his maiden foreign trip, was using strong language to take a dig at China's militarization of the South China Sea.

China was watching. Normally, Chinese authorities would reach into its vocabulary book and choose the strongest words available to condemn such talk by a foreign leader.

But not this time. The response was strangely calm and restrained. 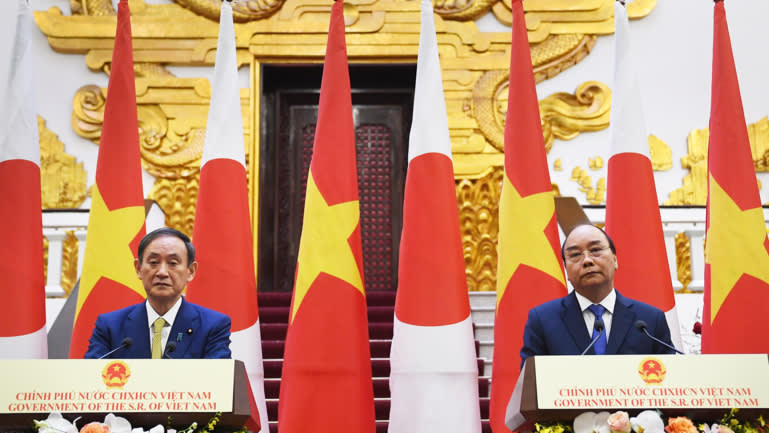 Suga and Phuc attend a press briefing following an exchange of documents at the Government Office in Hanoi on Oct. 19.   © Reuters

During Suga's stay in Hanoi, Japan and Vietnam agreed to strengthen bilateral supply chains. That would largely mean relocation from China, now that the coronavirus pandemic has exposed the dangers of being over-reliant on one production base.

On the security front, Japan and Vietnam also reached a basic agreement to sign a pact enabling the transfer of Japanese defense equipment and technology to the Southeast Asian country.

These are developments Xi can hardly ignore.

That Japan and Vietnam are in effect forming an anti-China coalition could only make Xi scowl.

But given the big picture, it would not be in China's best interest to make an immediate fuss about Japan and directly attack Suga.

The key to understanding the dynamics lies in the day's top news story. State-run Chinese media reported that Xi visited the Military Museum of the Chinese People's Revolution in Beijing. Xi visited the Military Museum of the Chinese People's Revolution in Beijing on Oct 19. (Xinhua/Kyodo)

Accompanied by the six other members of the Politburo Standing Committee, including Premier Li Keqiang and Vice President Wang Qishan -- who has retired from the Standing Committee but still is considered part of the top leadership -- Xi walked through an exhibition commemorating the 70th anniversary of China's participation in the 1950-1953 Korean War.

On Oct. 19, 1950, officers and soldiers of the Chinese People's Volunteer Army crossed the Yalu River, which forms the border with the Korean peninsula, to fight American forces.

Revisiting the hard-fought battle with the U.S., in the aid of North Korea, seems appropriate considering that China's relations with the U.S. appear ready to blow. Such a museum visit, and the playing of the history card, would be unlikely if relations were not so combustible.

Symbolically, the exhibition included descriptions about the well-known Battle of Chosin Reservoir in November and December of 1950. That was the battle in which United Nations troops, mostly comprised of Americans, engaged with Chinese soldiers for the first time and were forced to make their biggest retreat.

The exhibits are designed to demonstrate China's determination not to lose if indeed there were to be a conflict. 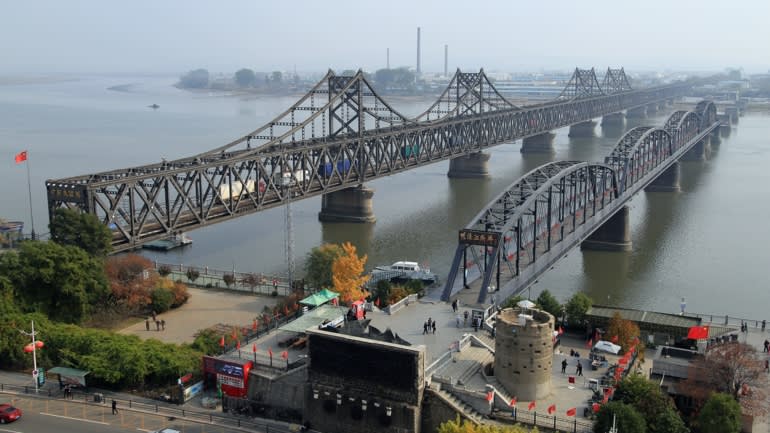 Yalu River lies the city of Dandong in China, the gateway to North Korea: On Oct. 19, 1950, officers and soldiers of the Chinese People's Volunteer Army crossed the Yalu River, which formed the border with North Korea, to fight American forces.(Photo by Akira Kodaka)

For Xi, the most important issue now is to resist pressure from U.S. President Donald Trump and to concentrate on domestic politics. A key Chinese Communist Party meeting, the fifth plenary session of the 19th Central Committee, at which Xi will need to assume more power to stay in office beyond 2022, begins on Monday.

Xi has no time to worry about Suga. Or Vietnam, for that matter, whose leader this year holds the rotating presidency of the 10-member ASEAN.

Vietnam is a particularly shrewd country that fought, and ultimately pushed out, American forces in the Vietnam War. In 1979, Vietnam also fought a short border war with China.

Times have changed, and Vietnam is now strengthening security relations with the U.S. and Japan to fend off China.

In the game of diplomatic chess, given that it would be difficult for Xi to visit the U.S. any time soon, it would make sense for China to start preparing for Xi's state visit to Japan.

Xi was scheduled to make what would have been his first official visit to Japan since becoming president in April but had to cancel due to the pandemic.

It would fall on Chinese State Councilor and Foreign Minister Wang Yi, who is well-versed in Japanese affairs, to make the delayed trip a reality. However, Japan-China relations today are just one misstep away from falling apart.

From the stance of Japanese domestic politics, the newly minted Suga administration is yet to establish a rock-solid footing.

Unlike predecessor Shinzo Abe, whose reign spanned seven years and eight months, Suga does not have the power to fully bring conservative forces under his influence, including those within the ruling Liberal Democratic Party, some of whom vehemently object to Xi making a state visit.

The same is true of LDP Secretary-General Toshihiro Nikai, the kingmaker who was the driving force behind Suga's coronation and has long been seen as one of Japan's most pro-China politicians.

Wang Yi's planned visit to Japan this month has now been postponed, reflecting the delicate diplomatic maneuvering between the countries.

When Wang visits Japan, he will have only one purpose: to lay the groundwork for Xi's Japan visit, which China envisages for next year. This can only happen if a favorable atmosphere emerges.

If Wang were to visit now, all questions would be about when to reschedule Xi's delayed trip. It will put considerable strain on the Suga government, which is not fully prepared for such a discussion. As things stand now, the Japanese public does not seem to be in the mood to embrace the Chinese leader. Skepticism toward China's initial cover-up of information related to COVID-19 is strong. Japan was forced to postpone the 2020 Summer Olympics in Tokyo after the outbreak grew into a pandemic. And it remains unclear whether the games can be held in 2021.

There are other issues, including China's highhanded introduction of the Hong Kong national security law that bypassed the territory's legislature, which had protected the "one country, two systems" formula.

Chinese vessels' repeated incursions into Japanese territorial waters around the Senkaku Islands in the East China Sea are also hampering efforts to create a favorable atmosphere for a Xi visit.

The South China Sea issue raised by Suga in Vietnam is serious as well. In one regard, China's militarization of the sea by building artificial islands and erecting installations on them poses a threat to Japan's security.

For myriad reasons, it is too early to reschedule Xi's trip.

"We are well aware that Beijing wants Wang to visit Japan at a relatively early date," one Japanese government source said. "But considering the various circumstances, it's still too early."

In addition, while it is important for Tokyo to maintain stable economic relations with China, hasty moves could lead to problems, bringing about unfavorable results for both sides.

Two major events await the U.S. and China in the coming weeks: The fifth plenary session and the U.S. presidential election will affect where the world goes from here.

Will Wang be able to visit Japan by year's end? That will be dictated by bilateral, regional and global events.