Analysis: The man who knew too much of Xi's power plays is out

TOKYO -- China's weeklong holiday period that began Oct. 1 with National Day gave ordinary Chinese time to travel and relax. But this time of year also tends to be one of political earthquakes.

This year was no different. On Oct. 2, a major heavyweight with direct knowledge of President Xi Jinping's long power struggle abruptly fell from grace.

Fu, 66, is an incumbent member of the party's elite Central Committee. The crackdown on an influential figure who has overseen the judiciary and police has sent immeasurable shock waves through China's political world.

Fu was behind the investigations that put countless people behind bars. Now that Fu himself has been placed under investigation, doubts could also arise about the legitimacy of his past investigations. It is a momentous development. "My impression was that he was a technocrat who started with case investigations and rose through the ranks," said one party source. "But this is a case of a man who knew too much. He was forced to leave, in quite a ruthless manner. Now, anything could happen."

One example of Fu's work was the investigation into Zhou Yongkang, a former member of the party's top decision-making body, the Politburo Standing Committee.

Until 2012, as the party's ninth-ranking official, Zhou had dominated all of China's judicial and police organizations.

But by Oct. 1, 2013, Zhou must have known that the noose was closing. He had built a vast information network through his former subordinates at police organizations and had various channels that fed him sensitive intelligence.

That day, Zhou was attending a symposium at the China University of Petroleum, his alma mater, located in a Beijing suburb. He might have thought this would be his last opportunity to speak publicly.

In December 2013, two months after the university appearance, the Politburo Standing Committee received a report on clues about his disciplinary violations and decided to place him under full investigation as part of Xi's signature anti-corruption campaign.

It was the first crackdown on a former Politburo Standing Committee member, breaking an unwritten party rule.

Fu, who was said to be an exceptionally sharp investigator, became a central member of a team established in the summer of 2013 to pursue the case. 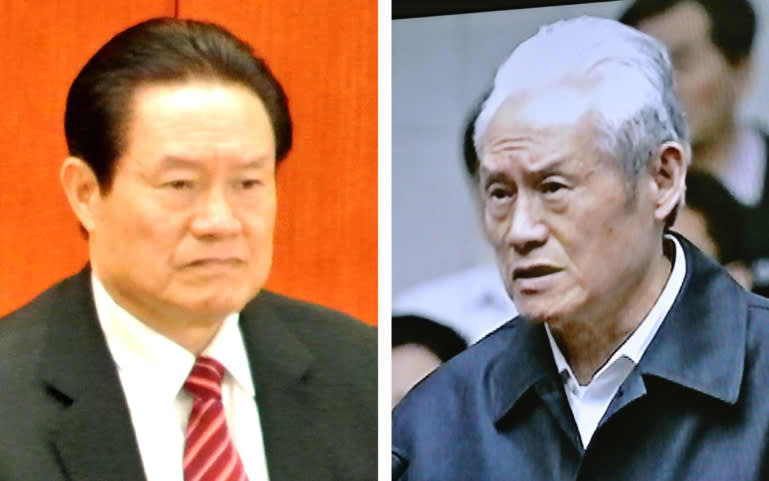 Zhou Yongkang at the 2012 Communist Party Congress and in 2015 during a court appearance.

Fu is a unique figure. When he was serving as Beijing's public security bureau chief, essentially the police chief of the Chinese capital, he was tapped as vice minister at the Ministry of Public Security, which oversees police organizations across the country.

He drove his former boss into a corner, and now Zhou is serving a life term after being convicted of corruption. The anti-corruption campaign is the source of Xi's power, and Fu's successful crackdown on Zhou contributed to bolstering the leader's rule.

Fu's moves were linked to those by the Central Commission for Discipline Inspection, which was then headed by Wang Qishan, a longtime Xi ally who currently serves as China's vice president.

Fu, who knows the subtleties of the fierce power struggle and related secrets, was recognized for his contributions and subsequently rose through the ranks.

In a military parade in Beijing in September 2015, Fu served as a top official in charge of security.

Fu was also behind the crackdown against hundreds of human rights lawyers and activists in July 2015, which has come to be known as the "709" incident -- named for the July 9 date it started. In the eyes of those arrested, Fu is a merciless, unsparing official.

Despite his proven track record as an elite police bureaucrat and pledge of loyalty to Xi, Fu fell from grace. Why?

Aside from specific charges he is facing, which will become clear at a later date, what is noteworthy is his political background as an "outsider." He is not purely a member of the Xi faction. In the eyes of the Xi side, Fu was a competent official but a figure that cannot be completely trusted.

Fu became nationally famous after leading a crackdown on Tianshang Renjian, or Heaven on Earth, a well-known luxury nightclub in Beijing. The venue was used to lavishly entertain senior bureaucrats and was linked to corruption among those in political power.

Fu launched an investigation into the nightclub as soon as he became Beijing's public security bureau chief in 2010. His predecessors had hesitated to do so. Ling Jihua tried to cover up his son's scandalous accident, an attempt that because of information provided by Fu backfired against former President Hu Jintao.   © Reuters

Fu was also deeply involved in dealing with a scandal involving Ling Jihua, who served as head of the party's general office in the era of former President Hu. Ling is now serving a life sentence.

In the early hours of March 18, 2012, Ling's son was killed instantly when a Ferrari he was driving at high speed crashed in Beijing. Two women who were in the Ferrari were reportedly either fully or half-naked.

Ling, eager to join the Politburo Standing Committee at the party's quinquennial national congress later that year, tried to pull strings to cover up his son's scandalous accident.

As Beijing's public security bureau chief, Fu had information about an investigation into the accident. The information eventually affected even the political situation in the run-up to the national congress, where Xi was inaugurated.

Former Chinese President Jiang Zemin used the information about Ling's son to condemn the Hu faction, to which Ling belonged, and succeeded in leading the reshuffle of the Politburo Standing Committee in the autumn of 2012, filling the top leadership posts with his cronies. Former presidents Hu Jintao, left, and Jiang Zemin attend the party's National Congress in 2012. Jiang was able to fill the Politburo Standing Committee with his cronies, thanks to the Ling Jihua scandal that weakened the Hu faction.   © Reuters

Nobody knows more of the secrets behind the big incidents that have rocked Chinese politics in recent years than Fu. And this makes him dangerous to Xi.

Xi harbors a long and deep distrust of police organizations. Including Fu, three vice public security ministers have now been detained since Xi's second term as president, which began in 2018.

The other two are Meng Hongwei, who was placed under investigation in 2018, and Sun Lijun, who came under scrutiny in 2020. Meng had become the first Chinese president of the International Criminal Police Organization, or ICPO.

The public security bureau chiefs of Chongqing and Shanghai have also been subjected to crackdowns. It is safe to say that the top police echelons that have been in charge of public security have completely crumbled.

The people who have survived are the friends and acquaintances that Xi has known for many decades and can trust. First and foremost of these figures is Wang Xiaohong, currently the most senior vice minister for public security.

When he was still young, Xi spent many years in Fujian Province and got to know Wang there. Xi went on to give Wang key posts in Beijing. They have known each other for more than 30 years.

A source in Fujian described Wang as "one of the few old friends President Xi can really trust." Wang is said to be a strong candidate to become the next public security minister.

Wang made news at the end of August 2020, when he issued an order concerning political discipline through an official publication related to police. Wang Xiaohong, currently the most senior vice minister for public security, is foremost among those Xi has known for decades and feels he can trust.   © Reuters

Wang specifically warned that "those who officially pretend to obey but secretly resist and those who are straddling the fence without showing the flag will be thoroughly removed."

Wang used the term liangmianren, or two-faced people, to refer to those who in officialdom pretend to obey but secretly resist.

The term is also incorporated in the party's disciplinary action regulation. It is a special political term, one Xi has repeatedly used in waging his anti-corruption campaign.

A year ago, Wang might have already assumed Fu to be a pretender/resister.

Meanwhile, Chen Yixin, a close aide to Xi, currently serves as secretary-general of the Central Political and Legal Affairs Commission, which oversees the judicial and police divisions, including courts and the prosecution.

Tang Yijun, also close to Xi, has been tapped to succeed Fu as justice minister. Chen and Tang belong to the "Zhejiang faction," which is made up of those who were Xi's subordinates in Zhejiang Province during the 2000s; they also form the core of the Xi faction.

Unlike Fu, Chen and Tang are pure members of the Xi faction.

Since becoming China's supreme leader, Xi has spent nine years trying to take full control of police organizations. The question now is whether the crackdown on Fu marks the end of these efforts.

Many within the party believe the curtain has not yet fallen. "If Xi seeks perfect political safety," one source said, "the crackdowns will go on forever. There is no end in sight."