Chinese President Xi Jinping has entrusted his nearly lifelong friend Wang Qishan, 72, with his most important missions. But that may be changing. (Source photos by Reuters)
China up close

Analysis: Whither Wang Qishan? All eyes on Xi's right-hand man

TOKYO -- Smack in the middle of its National Day holidays, China unwrapped its own "October surprise."

It was not the news of U.S. President Donald Trump and his wife Melania testing positive for the novel coronavirus.

Instead, it was a one-line statement that appeared on the screens of hundreds of millions of Chinese smartphones on Oct. 2.

It said that Dong Hong, a former vice ministerial-level official of the central inspection team, was under investigation on suspicion of "serious disciplinary violations."

It was issued by the Central Commission for Discipline Inspection, the Chinese Communist Party's top anti-graft body, and its mirror organization in the state government, the National Supervisory Commission.

Perhaps not all 90 million members of the CCP immediately understood the political meaning. But to those who did, the magnitude could not be understated. In the U.S., "October surprise" refers to an unexpected incident that blows up just before a presidential election, held once every four years. It would be fitting for China now, coming ahead of a major party event, the fifth plenary session of the 19th Central Committee.

The meeting is a milestone event, as the intraparty political battles intensify over who will stay, who will be promoted and who will leave at the party's next quinquennial national congress in 2022. It takes place in late October.

Dong works behind the scenes. Therefore not much is known about his skills or effectiveness.

But since Wang Qishan was transferred in the late 1990s to Guangdong Province, where, it is believed, he met Dong, the latter has followed his boss to every new station.

Dong went along as Wang was promoted to head the State Council's Office for Economic Restructuring, to party secretary of Hainan Province and to mayor of Beijing.

Dong's published background is limited, with parts of it deleted from the internet.

When he was young, he served as a secretary to Bo Yibo, one of the "Eight Elders" of the party and the father of disgraced former top Chongqing official Bo Xilai.

Chinese state media has remained silent. During China's long holiday period, they gave extensive coverage, sometimes satirically, to Trump's every move, as he entered and was later discharged from a hospital. But there have been no additional reports about Dong. 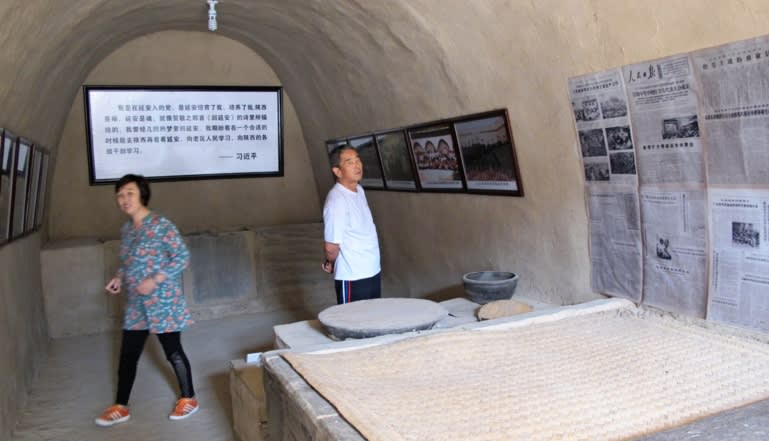 A cave in Shaanxi Province where Xi Jinping lived as a teenager: It was around this time that he met Wang Qishan. (Photo by Katsuji Nakazawa)

The powerful Wang Qishan is in a class of his own in Chinese politics.

Xi and Wang go back half a century. During the Cultural Revolution, the 15-year-old Xi and 20-year-old Wang were both sent to live and work in rural areas, and got to know each other in Shaanxi Province.

Xi visited Wang and stayed at his cave house near the city of Yan'an. There Wang advised Xi on what books to read. The girlfriend who was beside Wang at the time was Yao Mingshan, the daughter of a high-ranking official whom Wang would later marry.

When Xi became China's top leader in 2012, Wang was selected as a member of the party's Politburo Standing Committee, the country's top decision-making body, as well as head of the Central Commission for Discipline Inspection.

It was in that latter role that Wang thrived as the driving force behind Xi's signature anti-corruption campaign, widely seen as the leader's most significant achievement during his first five-year term.

In the spring of 2018, despite having already reached the unofficial retirement age of 68, Wang was tapped by Xi to be China's vice president, in recognition of his accomplishments.

Xi also pushed through a revision of the national constitution at an annual session of the National People's Congress, the country's parliament, to scrap the limit of two five-year terms for the president and vice president.

As a result, Xi and Wang could potentially be president and vice president for life.

But Wang has made less frequent appearances on the political center stage in recent months. His big Rolodex of connections in the U.S. economic and financial world has been nullified amid fierce U.S.-China tensions.

There was one precursor to Dong Hong's downfall. The announcement of the investigation came 10 days after a property tycoon was sentenced to 18 years in jail.

Ren Zhiqiang, a 69-year-old known for his online outspokenness, received the heavy sentence on Sept. 22.

At the time, Ren was placed under probation and had his party membership suspended for a year.

The leniency was said to be thanks to Ren's close relationship with Wang Qishan.

During the Cultural Revolution, the two had a senior-junior relationship at a school in Beijing, where Wang acted as Ren's instructor. 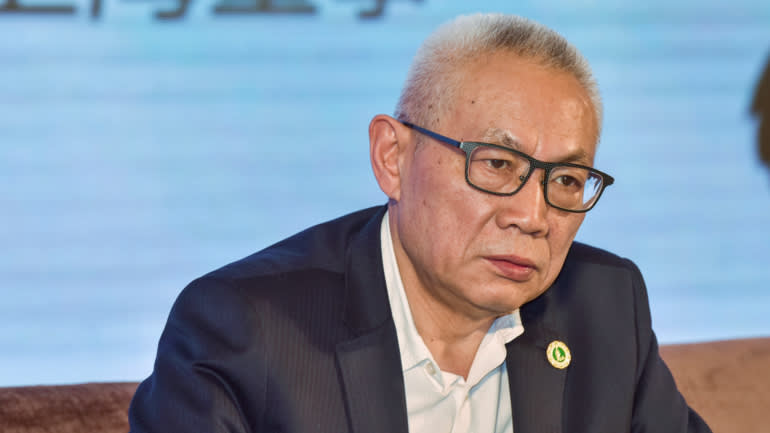 Ren Zhiqiang's blog posts from four years ago criticizing the Chinese Communist Party have caught up with him.   © AP

Ren, being the son of a vice commerce minister, was considered a "second-generation red," a name given to children of revolutionary-era party leaders.

But Ren's "Wang card" failed to save him earlier this year when Ren lashed out at the Xi leadership team over its handling of the novel coronavirus outbreak, including its slow initial response and cover-up of related information.

An essay purportedly by Ren that went viral mocked Xi as "a clown who stripped naked and insisted on continuing being emperor," although it did not mention the top Chinese leader by name.

Ren was stripped of his party membership before receiving the 18-year prison sentence on corruption and other charges.

The short time span between Ren's sentencing and the announcement of Dong's investigation make it a good bet that something is happening inside the party.

Dong is not without his enemies. He played a significant role in the anti-corruption campaign while working under Wang at the Central Commission for Discipline Inspection. Dong led a central inspection team that conducts internal investigations into each organization.

His team's inspection of Shenhua Group, China's biggest coal-related company under direct control of the government, ended with many executives being purged.

During an inspection of Fudan University in Shanghai, Dong declared that he would strictly crack down on misconduct, leaving no room for leniency.

But the corruption investigator is now the subject of an investigation.

Another major element is Xi's changing relationship with second-generation reds who have supported the current regime.

No anecdote explains better the special relationship between Xi and Wang than an incident at Beijing's Great Hall of the People in 2016. 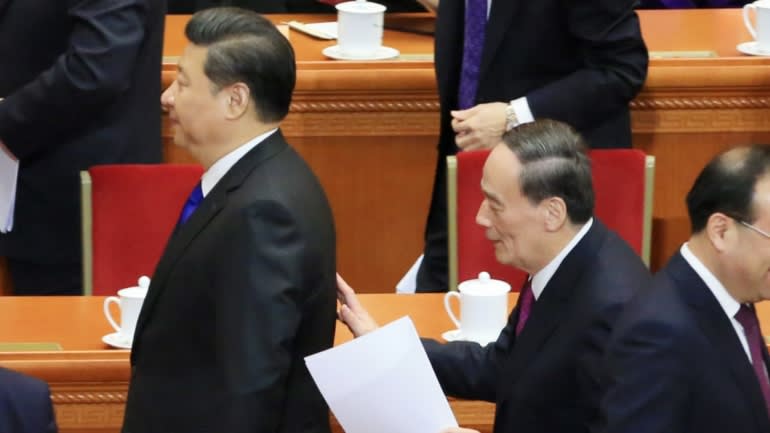 This iconic photograph from March 3, 2016, shows a chumminess between Xi Jinping and Wang Qishan that might no longer exist. (Photo by Akira Kodaka)

Wang called out to Xi from behind while putting his hand on the back of the top Chinese leader as if talking to a pal. It happened in front of several thousand eyeballs after the opening session of the Chinese People's Political Consultative Conference, the country's top political advisory body.

Xi was leaving the stage, followed by the six other Politburo Standing Committee members in order. Wang jumped the order and patted Xi on the back.

Wang is the only person who could have gotten away with such a personal gesture. But other members of Xi's inner circle who witnessed the scene were disgruntled with what they perceived as Wang's arrogant attitude. They later gently conveyed to him that he should show more respect to the leader, according to sources.

Since the last party congress, in 2017, a group of Xi loyalists who served under him in Zhejiang Province, otherwise known as the "Xi family army," have risen to prominence, replacing the second-generation reds as the leader's closest allies.

Old-timer Wang seems to be a delicate entity for members of the Xi family army who are aiming for further promotions at the next party congress, in 2022. He may be, so to speak, a thorn in their side.

Furthermore, the fact that Wang Qishan is the only figure having been allowed to stay on after hitting retirement age has triggered mixed feelings among recently retired second-generation reds and party elders who had departed before them.

Has twilight descended upon the once-formidable Xi-Wang alliance?

If yes, China is about to witness a tectonic change in its power structure.