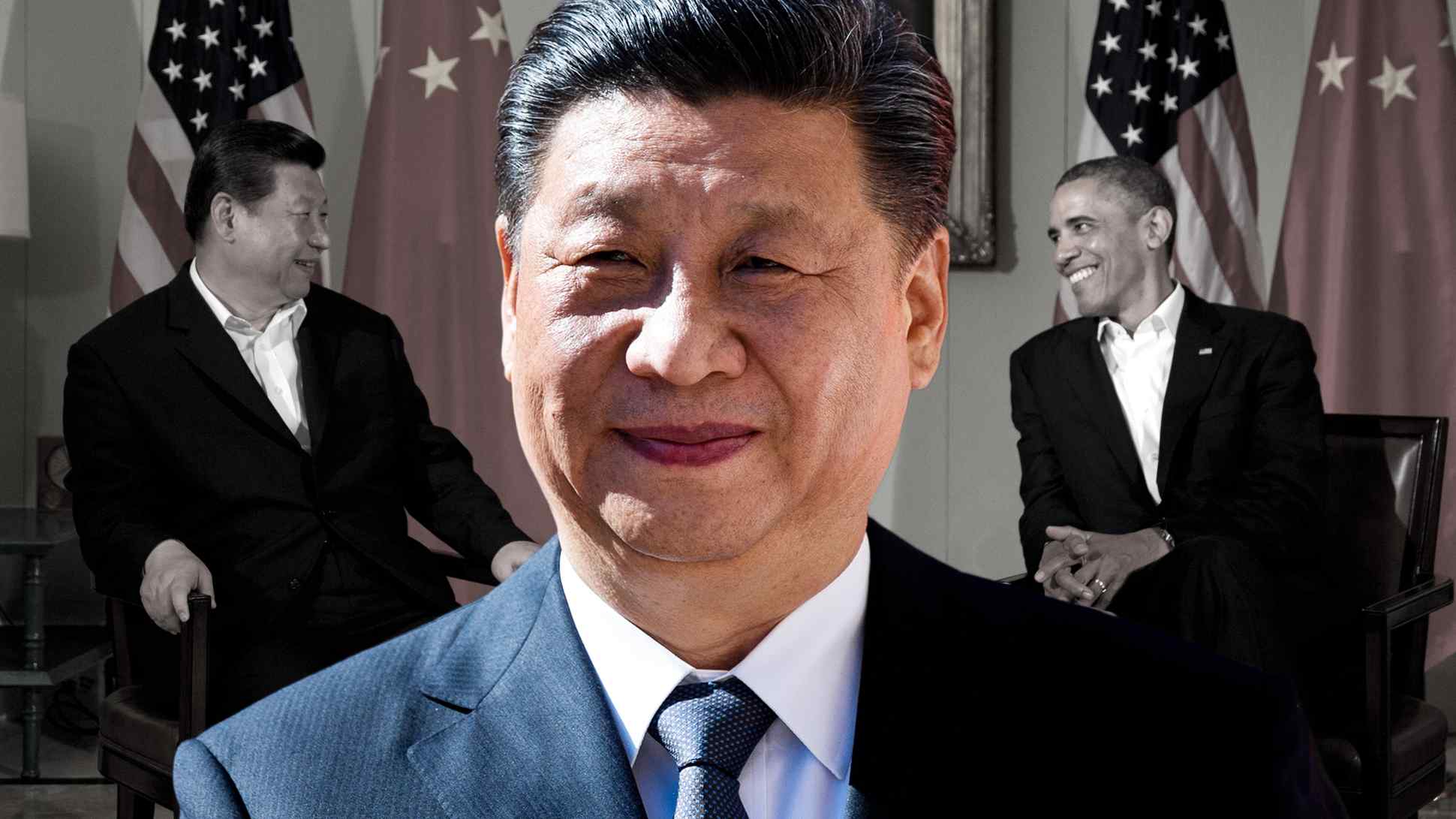 When Xi visited the U.S. in June 2013, he made a proposal to then-President Obama that tried to counter the TPP exclusion. (Source phots by AP and Getty Images)
China up close

"The more complicated the international and domestic environment," the leader said, "the more it is necessary to use rule-of-law thinking." Governance capabilities must be enhanced to "ensure the long-term stability of the party and the country."

A Chinese version of the Xinhua report of the meeting uses the word "rule of law" 114 times.

At first glance, Xi's remarks seem to be a long-awaited favorable sign of China moving toward what is defined by Western democracies as a country ruled by law. Not so fast.

The rule of law Xi repeatedly promoted points to a Chinese-style rule of law, under which the party takes precedence over the country. (Note carefully the earlier quote. Xi is calling for the long-term stability of the party first, then the country.)

Xi made the remarks at a meeting of the party's Central Committee on the rule of law, which was held in Beijing on Nov. 16-17, with the seven members of the Politburo Standing Committee, the party's top decision-making body, all attending.

The importance of the party's long-term rule is being emphasized in a political study campaign now underway across China.

Rule of law with Chinese characteristics is actually closer to "rule of man," something completely opposite to the rule of law in Western democratic societies. With term limits now abolished for the Chinese president, there is no longer any mechanism for transferring power to the next generation. Then US President Bill Clinton and Chinese President Jiang Zemin make a toast at the State Banquet in1998 at Beijing's Great Hall of the People.   © AFP/Jiji

"The old Chinese system, which was by no means a democracy, still guaranteed enough debate, and play, and openness because there was a regular rotation of leadership," he told the Bloomberg New Economy Forum. "Now that it appears that a person is in charge of China who intends to stay there for life, in essence."

"That changes things," he said.

The crux of Clinton's statement was that it is Xi's long-term reign, not U.S. President Donald Trump's bombastic policies, that has upended U.S.-China relations.

It is noteworthy that Clinton, a Democrat like president-elect Joe Biden, has such a perception.

Clinton has long been seen by Beijing as "an old friend" who understands China.

That is because, as he said himself, he engaged in "debate, play and openness" with the old Chinese system, meaning the eras of Xi's two predecessors Jiang Zemin and Hu Jintao.

In June 1998, during the Jiang era, Clinton made the first official visit to China by a U.S. president since the 1989 Tiananmen Square crackdown.

During his six-day China trip, Clinton visited Xi'an and Shanghai as well as Beijing, accompanied by his wife, Hillary, and daughter, Chelsea. Students at Peking University climb high to listen to remarks by U.S. President Bill Clinton at the campus grounds in 1998.   © Reuters

In a surprise move, Clinton's speech at Peking University was broadcast live across the country. It was the kind of openness that Clinton touched upon.

During that trip, Clinton publicly stated the so-called "3 no's" on Taiwan. These are that the U.S. does not support independence for Taiwan, does not support any solution that creates "two Chinas," and does not support Taiwan's admission to international bodies such as the United Nations whose members are sovereign states.

It was a significant win for Beijing to have the American president say so himself.

But back to modern times.

If indeed Xi's intention to stay in office for life is at the heart of the problem, logic would suggest that U.S.-China relations can be revived if the authoritarian leader retires early. That scenario looks unlikely.

Trump sensed a shift in the nature of China's leadership three years earlier than Clinton.

In November 2017, Xi took Trump on a tour of the Forbidden City in Beijing. At the former imperial palace where Chinese emperors once lived, Trump saw through Xi's ambition to revise the Chinese constitution to scrap presidential term limits. Xi had prepared for the move under a cloak of secrecy.

Trump reiterated his point. "No, you're president for life, and therefore you're king," he said, according to a recollection of the conversation he told an American audience in 2019. 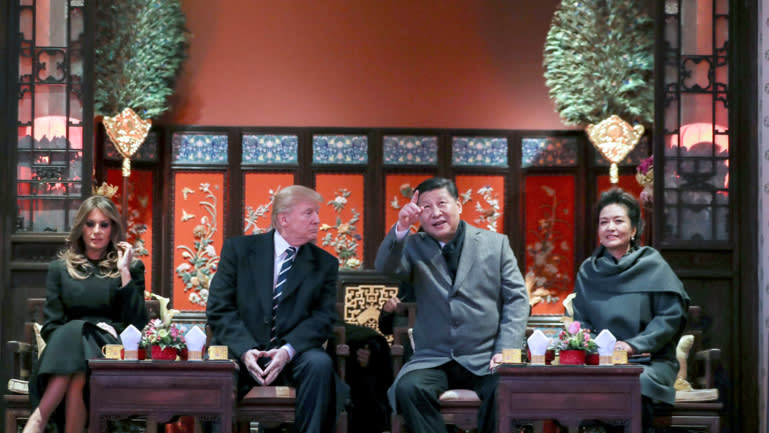 "He said, huh. He liked that. I get along with him great," Trump said.

Those were the good times.

Trump began to ramp up pressure on China the year after he dubbed Xi king. It was around then that the term "long-term stability" of the party and the country began to be used more frequently within China.

Speaking at the Bloomberg forum, Clinton advised Biden to cooperate with U.S. allies and international organizations in dealing with China.

Clinton said that the U.S. could strengthen its negotiating position with China by enlisting cooperation from partners such as European countries and Asian countries that have joined the Trans-Pacific Partnership.

Interestingly, it looks like it was China that was listening to Clinton's remarks.

In a speech to the APEC summit via video link on Nov. 20, Xi said China "will favorably consider" joining the Comprehensive and Progressive Agreement for Trans-Pacific Partnership, or TPP-11, as the trade pact is now called. U.S. President Donald Trump and Xi Jinping are seen on a screen during a virtual APEC Economic Leaders Meeting 2020.   © Xinhua/Kyodo

TPP was a trade grouping that intentionally left out China. By setting standards that were too high for China, the aim was to either pressure China to make the necessary reforms to join, or to have a grouping that excluded it.

When Xi visited the U.S. in June 2013, he made a proposal to then-President Obama that tried to counter the TPP exclusion.

"The vast Pacific Ocean has enough space for the two large countries of China and the U.S.," Xi said, urging the U.S. to share economic, trade and other interests in a "new type of great power relationship."

In 2017, Trump withdrew the U.S. from the TPP, providing some respite for China.

More recently, the fierce U.S.-China trade war has changed Beijing's view of the TPP. With the trade war escalating into a battle for technological supremacy, and perhaps leading to the decoupling of supply chains, China is seeking new trade partnerships.

Speaking at a news conference on May 28 after this year's session of the National People's Congress, Chinese Premier Li Keqiang said the country "has a positive and open attitude" toward joining the TPP. 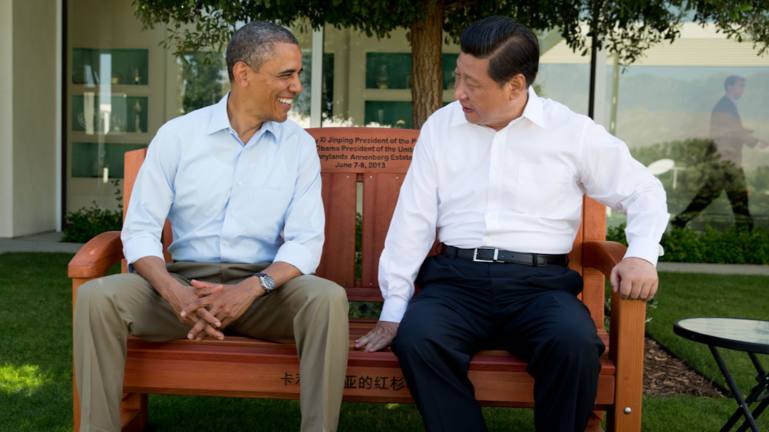 As the first step, China this month joined 14 countries in the region in signing the Regional Comprehensive Economic Partnership, or RCEP, a looser framework.

If China is to join the TPP, it will have to clear steep hurdles, including removing subsidies for state-owned companies. However, China looks increasingly willing to give it a try, given the current international situation.

China knows it has breathing space; the Biden administration is unlikely to move quickly to rejoin the TPP. Whether Biden's Democrats can capture a majority of the Senate will impact whether he can make the tough decision to return to the trade pact.

The "new type of great power relationship" proposed by Xi seven years ago fizzled out, but the TPP survived as a legacy of the Obama administration, albeit without the U.S. It is ironic that China now views the trade bloc as a vessel to protect its interests.

The seven-year tug of war between the U.S. and China over economic and trade interests in the "vast Pacific Ocean" is still underway.

After consolidating his power at home, Xi is poised to use the TPP, originally an anti-China coalition, to regain some lost ground in the Asia-Pacific leadership struggle.