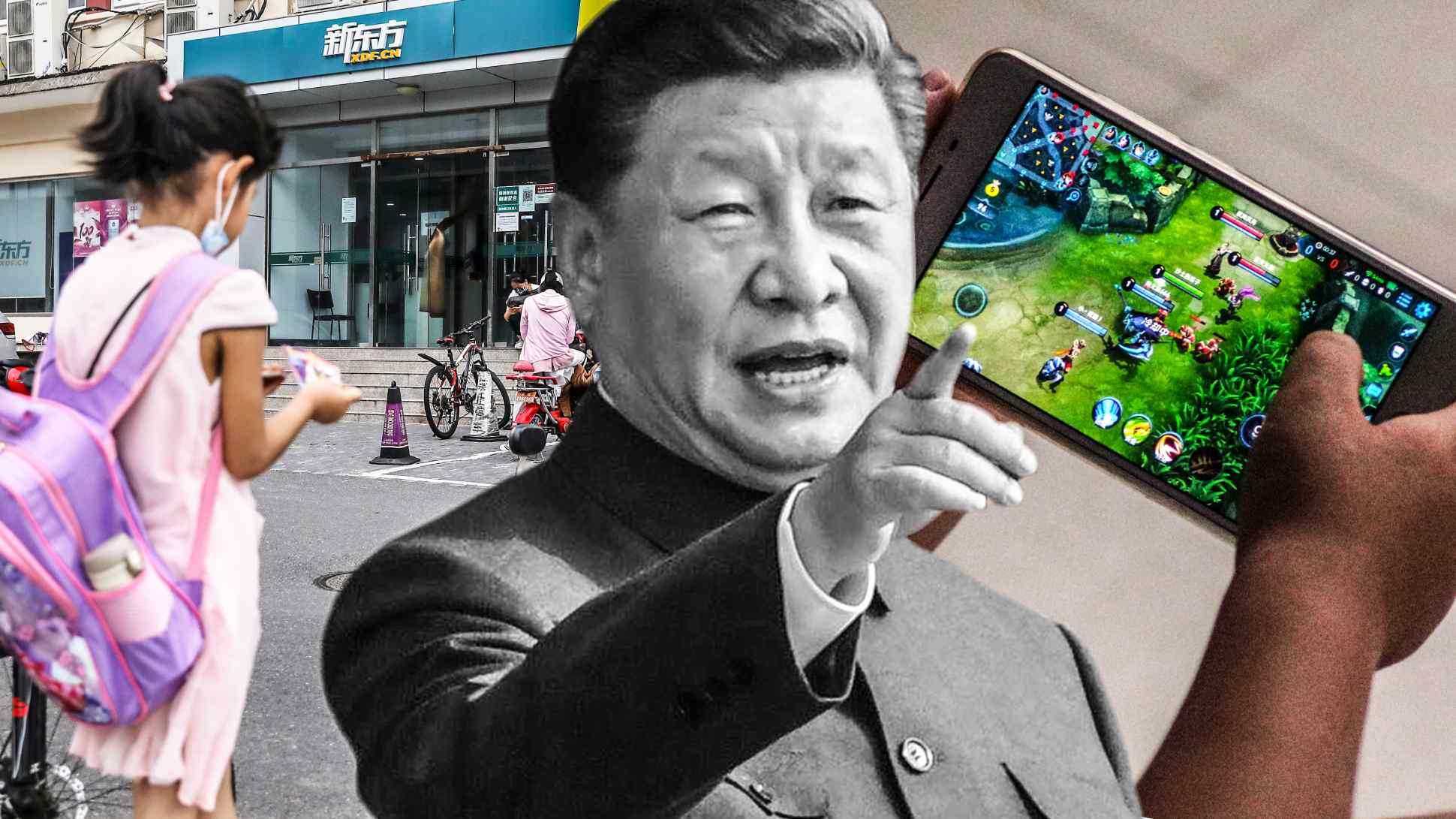 Karl Marx once called religion "the opiate of the masses." Now Chinese leaders think of video games in the same terms. (Source photos by Kyodo, Reuters and Getty Images)
China up close

Analysis: Xi aims to mobilize the masses with populist crackdowns

Demonizing of tutor industry and games has hints of Cultural Revolution

TOKYO -- China's crackdown on the tech industry has now spread to tutoring schools and online games, with state media labeling the industries as the "enemy" of the people.

The harsh language used to attack the country's fast-growing education and gaming industries is reminiscent of the Yan'an Rectification Movement during the early years of the Chinese Communist Party and the Cultural Revolution.

Critics have slammed tutoring schools as making undue profits, and have warned that capitalists and greedy "capitalist roaders" within the regime should not be allowed to collude. They have also called online games "spiritual opium" and lamented their proliferation.

This kind of rhetoric is abnormal, to say the least. The Rectification Movement of the 1940s was a campaign aimed at purging anti-mainstream factions, while the 1966-1976 Cultural Revolution featured mass mobilizations by Mao Zedong.

The current turmoil in the education industry began in late July when the party's Central Committee abruptly ordered private tutoring providers to turn into nonprofit organizations. Parents and their children leave a cram school in Beijing's Haidan district, where homes go for millions and competition for spots in top schools is cutthroat.   © AFP/Jiji

While the order looks like a response to growing complaints from parents who claim education places too high a financial burden on themselves and too much homework on their children, "the reality is that the order is aimed at strengthening political management of and control over the private education sector," said a source familiar with the world of Chinese education.

Public opinion is split; the crackdown has its supporters and its skeptics, the source said.

It is true that soaring education costs are an issue of strong interest to ordinary Chinese.

Particularly in Beijing and Shanghai, the cost of sending a child all the way through university is said to reach into the several hundreds of thousands of dollars per child, when the price of out-of-school tutoring is included.

Hypothetically, if President Xi Jinping could put an end to the backbreaking phenomenon, the support from the general public would be tremendous.

But populist measures do not always go as planned.

When the administration recently unveiled a new policy allowing a married couple to have a third child, it proved hugely unpopular because most people felt there were other priorities the government should tackle first -- including the high costs of education and housing that discourage couples from having children. Xi Jinping is hoping to win over families with his latest crackdowns.   © AP

Perhaps that is why the government laid out some unusually detailed homework restrictions as part of the most-recent education crackdown.

In addition to ending for-profit tutoring, the party's Central Committee banned all homework for primary school first and second graders, while capping the amount of homework for third, fourth, fifth and sixth graders at 60 minutes a day. Junior high students can be assigned only 90 minutes of homework a day.

In comparison, the crackdown on e-commerce giant Alibaba Group Holding and ride-hailing giant Didi Chuxing, conducted in the name of preventing "the disorderly expansion of capital," was abstract and difficult to relate to for the public.

But all of the crackdowns -- on private tech companies with huge amounts of personal information, on education and on the gaming industry -- are connected at the root: They are aimed at making it possible for the party to strictly control any private sector that has grown rapidly.

Documents regarding the new policies have all been issued at the initiative of the party's General Office, which manages work in Beijing's Zhongnanhai area, where Chinese leaders have their offices, under Xi's direct control.

The most recent orders demand visible results within one year.

Reducing the educational burden of Chinese households in just one year will not be easy. The draconian step of converting private tutoring schools into nonprofits was born of such a rushed time frame.

The clampdown on the tutoring industry includes barring foreign companies from entering China's education market. It is precisely the type of "China risk" that global investors fret about, and the stock prices of related companies sharply declined.

But Xi is a man in a hurry.

The party will hold its 20th national congress in the autumn of 2022, which will determine the future of Xi's regime. Attention there will be focused on whether the leader remains as China's No. 1, as widely expected, and whether he assumes a new post.

A prelude is already underway. Signals have been given that the annual Beidaihe conclave of China's current leaders and retired party elders in the seaside resort of Beidaihe, Hebei Province, has begun.

As is the custom, there have been no reports about the movements of China's "top seven" -- the seven members of the Politburo Standing Committee -- since a Politburo meeting on July 30.

Likewise, as the custom goes, a short article noted that a senior official, in this year's case the party head of Hebei Province, inspected security checkpoints in the luxury villa area of Beidaihe on the same day. The site of the Beidaihe Conference in Hebei Province, China, on Aug. 2. Chinese leaders and party elders are thought to be holding their annual informal talks at the seaside resort.   © Kyodo

Xi has steadily consolidated power, but his support within the party cannot be said to be rock-solid.

There is growing discontent among some of his fellow "second-generation reds" -- children of revolutionary-era party leaders -- about his political style increasingly smacking of a personality cult, banned under the party's constitution.

One issue of major concern among the elite is the visa restrictions the U.S. government has implemented on party members and their families. Symbolically, when Chinese Vice Foreign Minister Xie Feng met U.S. Deputy Secretary of State Wendy Sherman in Tianjin in July, revoking sanctions on party officials was at the top of Chinese demands put forward, reflecting the high degree of pressure coming from within the party.

For Xi, tapping the power of the general public is one way to negate any unhappiness within the party.

Although the number of party members has increased considerably, it is still just over 95 million. If Xi can demonstrate support from the remaining 1.3 billion ordinary Chinese, he will have an easier time further consolidating power.

It is a new form of "mass mobilization," and if Xi succeeds, it will give him a chance to depart from Deng Xiaoping's collective leadership model without causing friction. The former paramount leader introduced the system to avoid repeating the tragedies of the Cultural Revolution. Deputy Foreign Minister Xie Feng looks up before talks with visiting U.S. officials at the Tianjin Binhai No. 1 Hotel on July 26.   © Phoenix TV/AP

Earlier in his rule, Xi enjoyed success in garnering public support through his fierce anti-corruption campaign, which paved the way for him to acquire an unrivaled "core leader" status within the party. It also led to the 2018 revision of the national constitution to scrap the limit of two five-year terms on a Chinese president.

As Xi heads into the 2022 party congress, public support will be crucial once again.

The president's handling of COVID-19 has been a mixed bag. After initially failing to halt the spread of the outbreak, Xi pivoted, managed to contain the virus relatively quickly and then nursed China's economy back to life.

But the virus will not go away -- it is lingering around the world -- and it is difficult to predict what the situation will be at the time of the 2022 congress.

With this in mind, Xi needs to chalk up as many political achievements as possible.

His strategy to break the current impasse through mass mobilization is reflected in an article published in the Economic Information Daily that lashes out at online games as "spiritual opium."

The economic newspaper, which is affiliated with the state-run Xinhua News Agency, singled out "Honor of Kings," Tencent's blockbuster game, for criticism because of its reputation for being highly addictive. Tencent blockbuster "Honor of Kings" has been named and shamed by state media for its alleged addictive nature.   © CNS/Kyodo

Shortly after taking the helm of the party as its general secretary in the autumn of 2012, Xi chose Shenzhen for his first local inspection tour. He visited Tencent's headquarters there on Dec. 7 that year.

Shenzhen is one of the places Deng Xiaoping visited as part of his famous "southern tour" in early 1992, and Xi's visit there was taken by market participants as a message that he would firmly maintain Deng's "reform and opening-up" policy.

But in hindsight, there were already signs of tensions to come.

Xi then asked Tencent founder Pony Ma Huateng: "What should we do about the management of internet society?"

Xi also pointed to the huge volume of information Tencent handles. "You can conduct the most objective and precise analysis," he reportedly said. "Proposals to the government in this respect have a great deal of value." 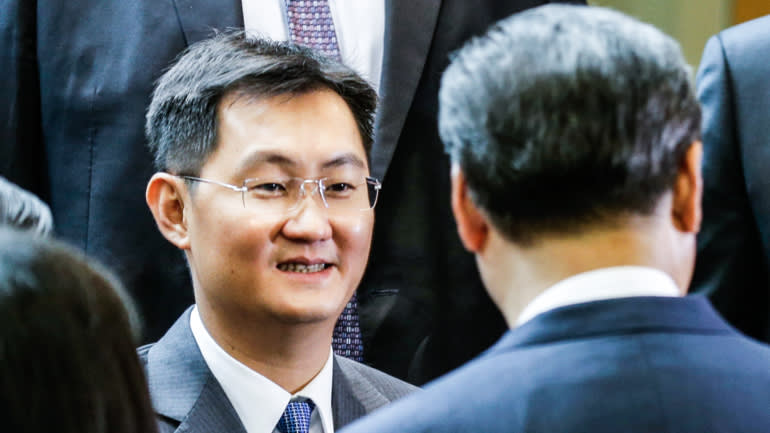 This seems to have been a first step toward China's subsequent internet censorship and recent tighter control over private tech companies.

Xi's honeymoon period with Tencent is over.

The most recent crackdowns are interesting in that they combine efforts to strengthen party control with tactics to pressure industries that frustrate so many households, such as tutoring and gaming. Call it socialist populism with Xi Jinping characteristics.

But as it was during the Cultural Revolution, rambunctious policies have consequences. Education is indeed important to the party and the state. But if ingenuity and diversity are denied, for the sake of party control, new ideas will not be born and innovation will stall.

"If they just unilaterally destroy or restrict businesses without creating a favorable environment for the development of new growth industries, it could deal a fatal blow," one party member said. Amid a great power competition in geopolitics and the economy, China hardly has the luxury for such detours.