The Chinese Communist Party will hold its next national congress late in 2022, and already there is speculation about whether Xi Jinping will use the occasion to restore the title of chairman, which last belonged to Mao Zedong. (Source photos by Kyodo and Getty Images)
China up close

TOKYO -- He was supposed to be the forgotten hero of the Chinese Communist Party.

But he stepped down from the posts and spent the latter part of his life in obscurity. He quietly passed away during the 2008 Beijing Olympics, and his name has rarely been in the news since then.

That changed on Saturday when a high-profile symposium to commemorate the 100th anniversary of his birth was held in Beijing, causing a stir in Chinese political circles.

"Hua was an outstanding member of the Communist Party of China, a long-tested and loyal communist fighter, and a proletarian revolutionary who once held important leading posts in the Party and the government," the official Xinhua News Agency reported.

President Xi Jinping did not show up, but two members of the Politburo Standing Committee -- the party's top decision-making body -- and three Politburo members did, adding political weight to the event. A high-profile symposium on February 20 commemorated Hua Guofeng, a forgotten hero of the Chinese Communist Party now being touted for his loyalty to the party. (Screenshot from CCTV)

One party source pointed out the political meaning of the symposium. "It is not so much that the Communist Party's evaluation of Hua has changed. It is more likely an attempt [by Xi] to achieve a goal in contemporary politics, using Hua's name."

It comes as China approaches two important milestones: the 100th anniversary of the Communist Party later this year and the party's National Congress next year. Held once every five years, it is when the party's leadership team is reshuffled.

Hua was loyal to Mao throughout, even during the Cultural Revolution, one of the bloodiest periods in China's modern history, during which officials, teachers and intellectuals were publicly humiliated and beaten.

After Mao's death, in 1976, Hua was deprived of his power by Deng Xiaoping, who later led China into its "reform and opening-up" era.

Deng, who had fallen victim to the Cultural Revolution, returned to power and removed Hua from one post after another. Hua lost his premiership first, in 1980, and then his chairmanships of the party and Central Military Commission, in 1981.

A year later he was removed from the Politburo Standing Committee.

Simultaneously, Deng took apart the tools of power that allowed Mao to rule unquestioned. Deng revised the party's constitution to make clear that leaders do not rule for life. He also incorporated a ban on "any form of personality cult" and abolished the post of party chairman, Mao's title.

In the national constitution, Deng added a limit of two five-year terms for Chinese presidents.

All of these measures were taken to prevent the concentration of power based on lessons learned from the Cultural Revolution, during which the idolization of Mao was promoted.

That path of collective leadership continued until the appearance of Xi.

The line raised eyebrows, with some wondering if it was in some way affirming the Cultural Revolution. Such a statement was unimaginable in the eras of Jiang Zemin and Hu Jintao, two presidents who were hand-picked by Deng.

But eight years ago there were few party cadres who truly understood what Xi was implying.

Little did Chinese imagine that Xi was signaling a strategy to revise the constitution, which happened in March of 2018, in a clear denial of Deng's policy to decentralize authority.

But three years ago Xi managed to undo the leader-for-life ban by pushing through a constitutional revision to Deng's term limits.

Today even the cult of personality ban resides in a fragile state. The first season of Ping Yu Jin Ren aired in 2018, when the Chinese constitution was revised. The special series is heavy on propaganda, aiming to cement Xi's image as a great leader.

On the night of the Hua Guofeng symposium, the topic of Ping Yu Jin Ren was "loyalty," and the two Chinese characters that spell zhongcheng, loyalty, were prominently displayed on the screen.

Based on lessons learned from this disastrous period, the party under Deng amended its own constitution to ban "any form of personality cult" -- a ban that today looks increasingly wobbly. One noteworthy aspect of the Hua Guofeng symposium was the number of "second-generation reds" that attended. The children of revolutionary-era party leaders form a major political faction.

Notable second-generation reds include Liu Yuan, the son of former President Liu Shaoqi, who died a miserable death during the Cultural Revolution.

As Xi's friend, the younger Liu helped the Chinese president purge corrupt military officials. Although Liu rose through the ranks to general, he left the military at the end of 2015.

Also present was Mao Xinyu, Mao Zedong's only legitimate grandchild, and a major general in the People's Liberation Army. The younger Mao was a longtime delegate to the party's national congress but was not chosen in 2017, leading to speculation that his relationship with Xi had deteriorated.

Xi himself is a second-generation red. His late father, Xi Zhongxun, once served as Chinese vice premier.

When Xi took the helm of China and launched his massive anti-corruption campaign, his fellow second-generation reds were on board.

While many influential figures, including former Politburo Standing Committee member Zhou Yongkang, were ensnared, only a handful of second-generation reds were sent to jail. 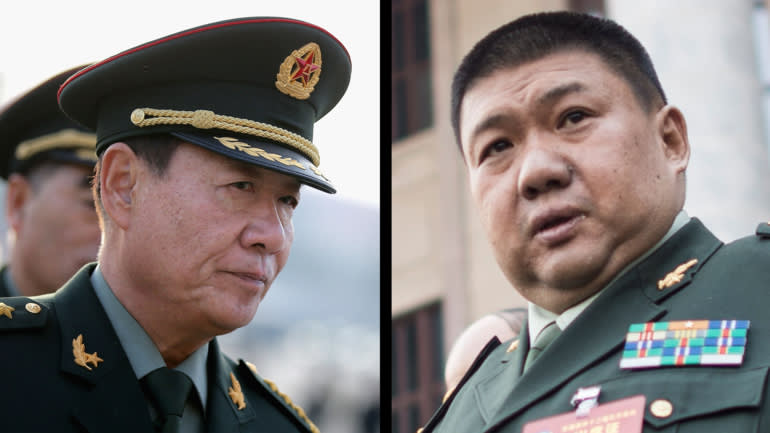 Liu Yuan in 2015 and Mao Xinyu in 2017. Liu is the son of former President Liu Shaoqi, and Mao is Mao Zedong's only legitimate grandchild.

The tide turned at the party's last national congress, in 2017, when the number of second-generation reds tapped for key posts was surprisingly low. It gave the impression that they had been marginalized.

Instead, Xi filled his inner circle with longtime subordinates, many of whom had been his proteges since their time in Zhejiang Province.

During Saturday's symposium, Wang Huning, a Politburo Standing Committee member who is in charge of ideology and propaganda and ranks fifth in the party's hierarchy, praised Hua's strong loyalty, sincerity and compliance with party discipline.

"In the difficult environment of the Cultural Revolution," Wang said, Hua "insisted that factionalism should not be allowed in the party branch. Facing the dangerous situation of the 'Gang of Four' attempting to usurp the party and seize power, he resolutely stated, 'History has pushed me to this position, and I must act bravely regardless of personal safety.'"

After Mao's death, Hua cooperated with the arrest of the Gang of Four, who led the Cultural Revolution. But Wang's mention of factional activities has considerable contemporary political implications.

During his anti-corruption campaign, Xi has repeated that party members cannot sit on the fence, watching which side wins. Everyone must show the flag.

The message to second-generation reds is that "factional activities" will not be tolerated. This goes another step further in demanding loyalty.

Xi is bullish. China has weathered the coronavirus crisis under his leadership, and the economy has begun to pick up. "The world is undergoing profound changes unseen in a century, but time and situation are in our favor," he told senior officials in January.

How will the proud second-generation reds respond? Deep down, many of them feel their families were higher in rank, or at least on par, with the Xi family.

Will they continue to lose ground to Xi? Or will there be a backlash? We shall see.