Wang Qishan is back as "Chinese President Xi Jinping's special representative," working to put China-U.S. relations back on track. His recent mission puts to rest speculation that he is on the outs with Xi. (Nikkei montage/Getty Images/AP/Xinhua/Kyodo)
China up close

Quiet negotiations are underway to secure a summit with Biden

Washington earlier this week conducted a flurry of top-level diplomacy in Asia. The underlying theme in President Joe Biden's visit to South Korea and Japan, the Quad leaders summit, and the launch of the Indo-Pacific Economic Framework was how to deal with China.

Meanwhile, U.S.-China relations are teetering on the edge of an abyss. This is a major concern for Chinese President Xi Jinping as he seeks to remain the country's top leader at the Chinese Communist Party's national congress this autumn.

It doesn't give Xi confidence that Chinese public opinion is evenly split over the war in Ukraine.

Under the circumstances, he has made a quiet, strategic move.

Xi seems to have tapped Vice President Wang Qishan, his longtime ally, to put relations with Washington back on track. Wang has strong connections to Wall Street due to his long career overseeing China's finance and commerce sectors. Yoon Suk-yeol talks with Wang Qishan after being inaugurated in Seoul on May 10. How many messages was Wang carrying that day?   © Reuters

The common analysis that day was that in sending an unusually high-ranking official to South Korea for a president's inauguration, Xi was signaling that he attaches importance to relations with the neighboring country.

But what if Wang had another important mission?

Sources familiar with the matter said that during this short visit, Wang sent a signal to the U.S. delegation showing China was ready for dialogue. He was putting out feelers to gauge if some kind of U.S.-China high-level engagement would be possible in the near future.

It was an opportune moment. The festive mood in Seoul and the hustle and bustle of the city allowed Wang to move without attracting attention. 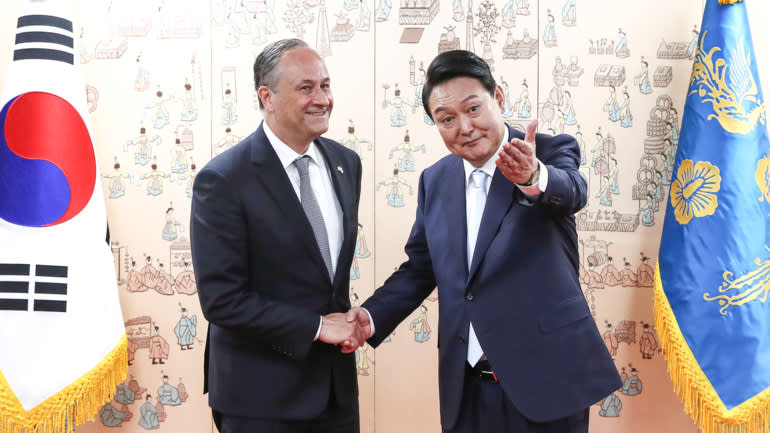 "The U.S. side has made it clear on many occasions that it follows the one-China policy and does not support 'Taiwan independence.' However, recent U.S. actions and statements on the Taiwan question are quite different," a Xinhua readout quotes Yang as saying. "If the U.S. side persists in playing the 'Taiwan card' and goes further down the wrong path, it will surely put the situation in serious jeopardy."

But what could have been more important was the simple sentence at the end of the report: "They also exchanged views on Ukraine and the situation on the Korean Peninsula and some other international and regional issues."

Reading between the lines, China was signaling that if Biden were to refrain from going further than assumed on the Taiwan issue during his Asian tour, China would be able to cooperate to a certain extent in regard to the Ukraine situation and on the Korean Peninsula, as North Korea gears up for another nuclear test.

It would not be strange for China to be preparing for a Biden-Xi summit. China likely added some other demands, including the removal, or at least reduction, of Trump-era tariffs on Chinese goods. China's Yang Jiechi and the U.S.'s Jake Sullivan sit across from each other in Rome in March. The two spoke by phone a week after Wang Qishan was in Seoul. (File photo by Xinhua/AP)

This was a favorable situation for the White House ahead of Biden's Asia visit. If Beijing was invested in a summit in the near future, it would not take any unexpected military adventures during the Biden trip.

Interestingly, a day later on May 19, Sullivan strongly hinted at a possible Biden-Xi exchange in the not-so-distant future.

"I wouldn't be surprised if, in the coming weeks, President Biden and President Xi speak again," Sullivan said aboard Air Force One en route to South Korea. Sullivan's remark showed that, at least as of May 19, communication between the U.S. and China was going smoothly.

Speculation emerged among Chinese officials that Xi-Biden talks might be set for the end of May, shortly after the Quad summit in Tokyo.

There was another important signal. Once again, it was Sullivan who revealed it. During a briefing on Sunday, Biden's national security adviser said Taiwan would not be joining the IPEF for now.

It was a goodwill gesture from the U.S. side to Beijing.

Wang Qishan's trip to South Korea -- to serve as a conduit between China and the U.S. -- is also important in the context of Chinese domestic politics. It shows that despite rumors of a rift between Xi and Wang, the personal relationship remains solid.

At the end of the day, it was Wang Qishan that Xi turned to as political headwinds turn stronger. Amid a sudden economic downturn, Xi needs China-U.S. relations at least to be stable.

A half-century ago, Xi and Wang spent time together in Yan'an, Shaanxi Province, during the Cultural Revolution. Both were "intellectual youths" from urban areas who were sent to live and work in rural villages. Wang was like a big brother to Xi.

When Xi pushed through a revision to the national constitution in March 2018 so presidents would no longer be limited to two five-year terms, the vice president was freed from the same constraint. Technically, Wang can remain vice president indefinitely, depending on how Xi thinks. When they were growing up, Wang was like a big brother to Xi. How long will Wang stay as vice president?    © Reuters

Now that the Japan-U.S. and Quad summit meetings are over, the question is whether China's intention for a high-level exchange remains unchanged.

At a joint news conference with Japanese Prime Minister Fumio Kishida in Tokyo on Monday, Biden was asked if he was willing to get involved militarily to defend Taiwan, despite not taking such a position in Ukraine.

"Yes," Biden replied, adding that "it's a commitment we made."

Biden's Taiwan remark drew a strong backlash from China. The question is how China actually perceives it and behaves.

At the same news conference, Biden also said he is "considering" lowering punitive import tariffs on Chinese goods, which would be a boon for Xi.

If a U.S.-China online summit were to happen soon, what would Xi say to Biden? While touching on the usual talking points on Taiwan, he would most definitely indicate that he has no intention of destroying China's relations with the U.S.

He has little choice. A deteriorating China-U.S. relationship would only give party elders and rival party factions ammunition to oppose his bid for a third term.

The Chinese economy is struggling, due to Xi's very own "zero-COVID" policy and economic policies that bully private companies. Xi now cannot afford to take a hard line toward the U.S.