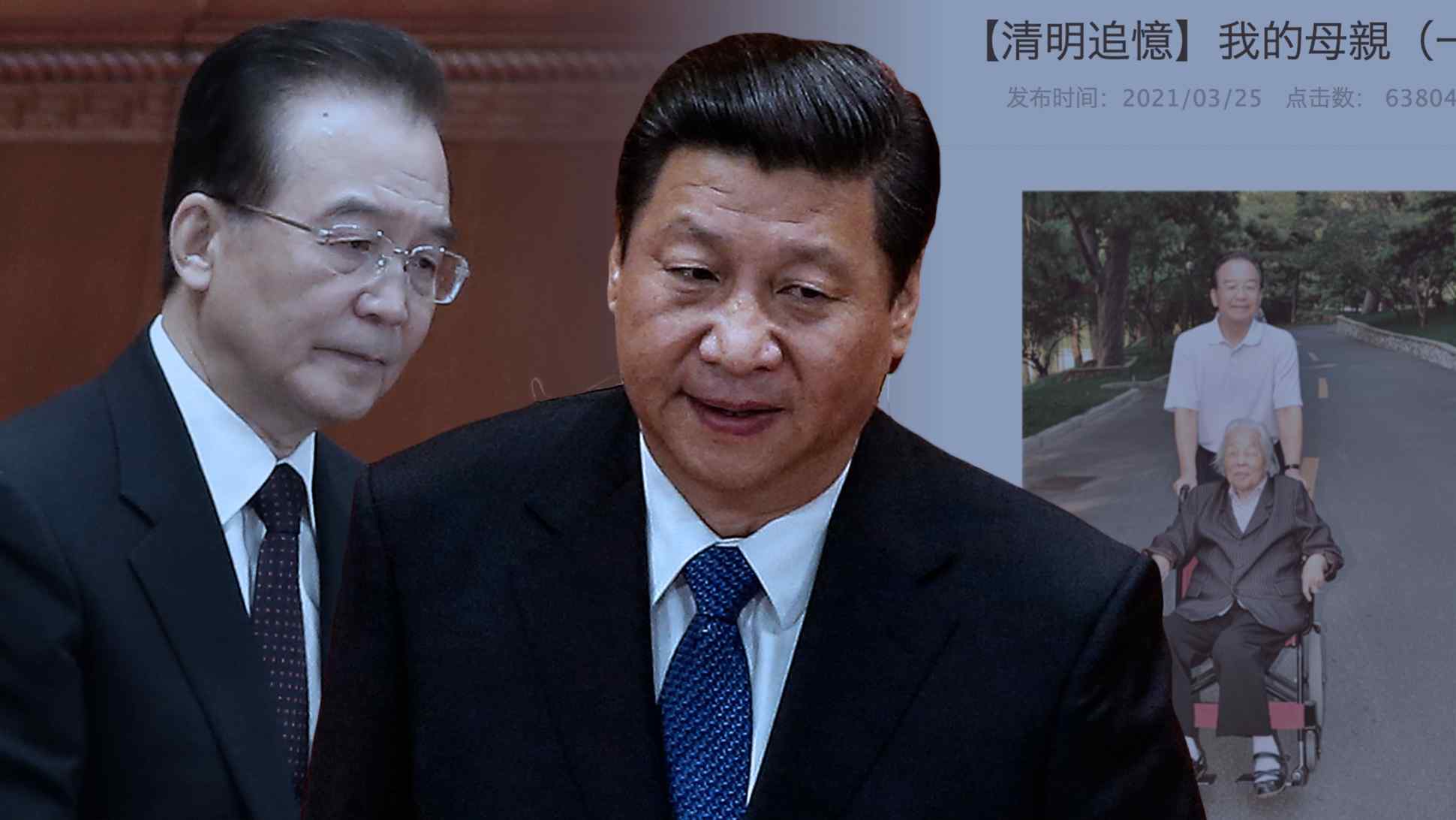 The administration of President Xi Jinping blocked mainlanders from reading an essay written by former Premier Wen Jiabao about his mother. Why? (Nikkei montage/Getty Images)
China up close

Alibaba connection lurks in the background

His writing, which pays tribute to his late mother and was published recently in a Macao newspaper, cannot be forwarded through messaging apps, and related articles cannot be searched on the internet.

There are likely two aspects as to why the administration of President Xi Jinping has gagged Wen.

The conventional take is to point out that Wen, who served as premier under President Hu Jintao between 2003 and 2013, was known as a "reformist" leader, and that the references his essay made to the Cultural Revolution were an indirect criticism of Xi.

Wen famously mentioned that dark chapter of Chinese history in a news conference in March 2012, when he warned that unless China's political system was reformed, "a historical tragedy like the Cultural Revolution could occur again." Wen Jiabao speaks at a news conference following the close of China's National People's Congress on March 14, 2012, in Beijing.

It was his last news conference as premier, and Wen spoke those words in an uncustomary harsh dressing down of then-Chongqing Party Secretary Bo Xilai.

In his recent essay, Wen wrote how his father, a teacher, was beaten so harshly during the 1966-1976 Cultural Revolution that his vision was blocked by a swollen face.

"In my mind," Wen wrote, "China should be a country full of fairness and justice, always with a respect for the will of the people, humanity, and human nature."

Wen's stance differs from that of Xi, who has been less enthusiastic about denouncing the Cultural Revolution.

But it seems there is more here than a party elder criticizing the incumbent leader.

Some believe Wen's mention of the Cultural Revolution is in line with previous statements and not necessarily troubling. "They are within the boundaries," one political source said.

A more realistic analysis is that China is now entering a politically sensitive period, and the Xi administration sent a warning to Wen and his relatives to keep silent and refrain from making any moves.

Another take puts this in the context of Xi trying to strengthen his grip on China's financial industry, and that the issue is linked with the recent crackdown on Alibaba.

In what way? An incident that happened around the same date may offer a clue. This Chinese-style gate built by Chen Yuan in front of the CDB building in Beijing was torn down five years ago at the behest of Xi and his aides. (Source photos by Reuters and CCTV)

On the night of April 19, news broke that Zhang Maolong, 68, a close aide to Chen Yuan, former chairman of the China Development Bank, was being investigated for "suspicion of serious violation in [party] discipline and law."

The probe into Zhang, which comes eight years after he retired from front-line business, is unusual.

The CDB directly reports to the State Council, China's government, and is an important organization in charge of policy-based financing.

Chen is one of the leading "second-generation reds," children of revolutionary-era Chinese Communist Party leaders.

At the CDB other people close to Chen have also been put under investigation since the beginning of this year. The pressure campaign is seen as a warning to the second-generation reds.

Five years ago, Xi and his aides had already demonstrated their distrust of Chen by tearing down a huge and pompous Chinese-style gate built in front of the CDB building in Beijing. At the time, Chen was at the bank's helm.

Chinese media outlets gave plausible reasons for the dismantling, with one saying the gate "does not match the community's character and is also incommensurate with the modern building of the bank itself."

But the political motive seemed clear.

In Xinghai Park, in the northeast port city of Dalian, a huge stone pillar in 2016 was also abruptly pulled down.

Depicting a dragon rising to the sky, the white pillar had been built by Bo Xilai, also a second-generation red, when he served as the flamboyant mayor of the city. Bo, who was criticized by Premier Wen during that 2012 news conference warning of a "historical tragedy," is now serving a life sentence for corruption. Bo Xilai, who built the "huabiao" pillar on the right, is said to have harbored ambitions of replacing Xi as leader. (Source photos by Xinhua/AP)

The pillar, or huabiao, was once a symbol of a Chinese emperor. The Dalian huabiao was regarded within the party as a symbol of Bo's ambition to become an emperor himself, an aspiration that ran counter to the party's political discipline.

The dismantled gate in front of the CDB building is also closely related to an emperor's power. The Xi administration did not allow the flashy gate built by Chen Yuan on a thoroughfare running east-west through Beijing to continue to exist.

The removal of the gate in Beijing and the stone pillar in Dalian in 2016 presaged the full-scale advent of the Xi Jinping era.

At the party's last national congress, in 2017, Xi significantly consolidated his power, having his eponymous ideology -- "Xi Jinping Thought on Socialism with Chinese Characteristics for a New Era" -- enshrined in the party's constitution.

The party's next national congress will take place in 2022.

Similar incidents happen in similar political seasons. Pundits, therefore, are now trying to dissect the connection between the crackdown on Chen's aide and the fuss over Wen's essay.

According to previous reports in The New York Times, companies related to Wen Jiabao's son Wen Yunsong, as well as Chen Yuan were among the shareholders of Chinese e-commerce giant Alibaba Group when it listed on the New York Stock Exchange in 2014.

One more notable shareholder was said to be a company related to Jiang Zhicheng, the grandson of former President Jiang Zemin. 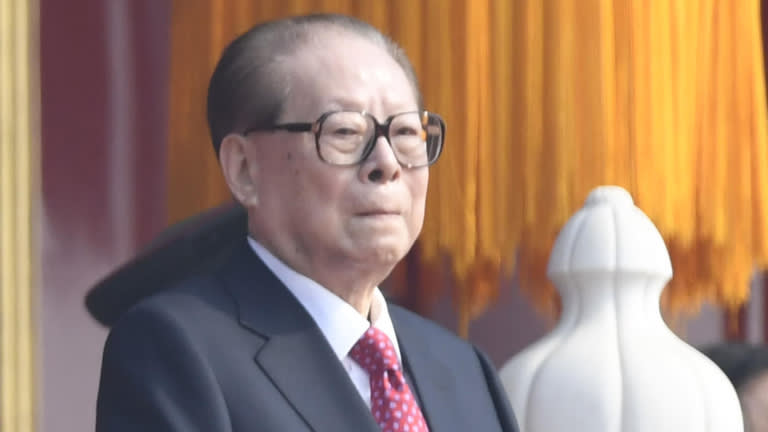 Jiang Zemin takes in a military parade marking the 70th anniversary of the founding of the People's Republic of China in 2019.   © Kyodo

Jiang Zhicheng in early 2015 accompanied his famous grandfather on a climb up Dongshan Ridge, a mountain located on Hainan Island. Jiang Zemin had brought along three generations of his family, including his wife, children and grandchildren.

"Jiang Zemin is here. It's a worthwhile trip," the former leader cried out from the mountain. "If I promote this spot after I return to Beijing, tourists will flock here!"

Jiang's remarks on the mountain, which were first reported by a local online media outlet, were aimed at showing the former leader was still influential, not only with the political world but also with the economic and financial world.

Seeing Jiang's move as disturbing, the Xi administration immediately ordered the deletion of all related articles and photos on the internet.

All in all, the grandson of former President Jiang, the son of former Premier Wen and Chen Yuan have had some connection to Alibaba as well as influence with the financial world. In the eyes of Alibaba founder Jack Ma, they are also his backers.

Meanwhile, Xi does seem to be sympathetic to Wen regarding some aspects.

Wen, known as a premier who stayed close to ordinary people, became embroiled in political strife in his last days in office over allegations that his relatives amassed a huge fortune.

Some say Wen was targeted by the party's left for going after their torchbearer, Bo Xilai.

In January 2014, a personal letter from Wen was published in a Hong Kong newspaper to dispel the suspicions that were falling on him. "I have never, in no way, done anything to use my position for personal gain," he wrote. "I have sought a fair and just society."

The party has special rules. There is a tacit agreement that party elders retire quietly and stay out of the media. Nevertheless, Wen had the letter published in 2014. This time he had an essay published that took the form of a tribute to his late mother.

He probably hopes to restore an image tarnished by past political strife and go down in history in a justifiable manner.

If the essay's reach had been limited to Macao, Xi may have turned a blind eye. But his administration was not going to tolerate Wen's words being circulated on the mainland, not with only a year and a half remaining until the party's next national congress.

If party elders, second-generation reds and "princelings," or children of prominent senior party officials, are allowed to freely speak now, they could hamper the Xi administration's efforts to take full control of the country's economy and financial sector, as well as the nation's politics.

The administration's assertiveness was on display in early November when it forced Ant Group, a financial company affiliated with Alibaba, to delay its dual listing in Shanghai and Hong Kong. Heaping political pressure onto the second-generation reds and princelings behind Alibaba is another show of force.

The Xi administration's move to gag former Premier Wen can be interpreted in the same context.