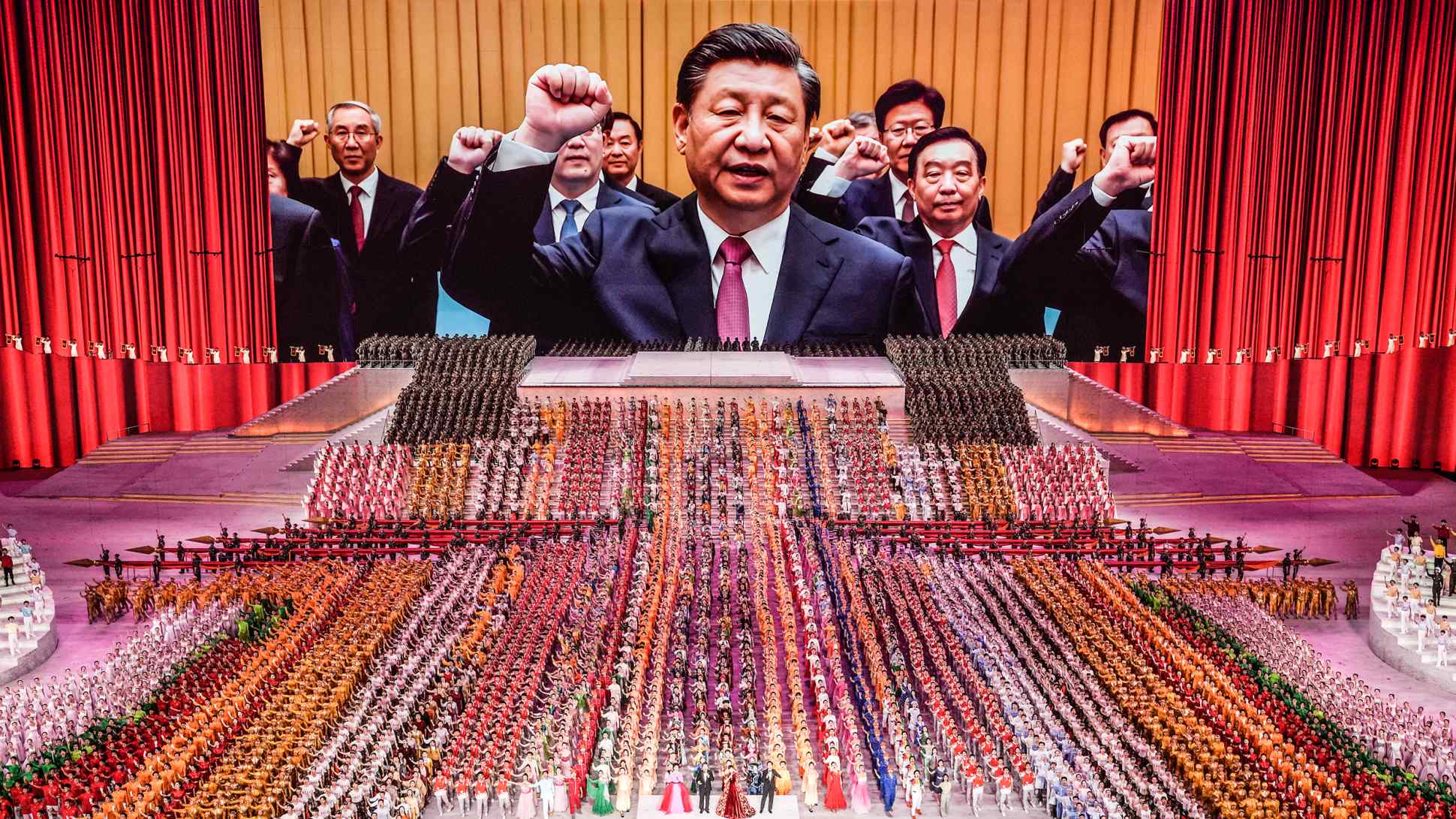 Xi Jinping is warning young party officials to "never tremble in the face of danger and never be spineless cowards."   © AP
China up close

TOKYO -- A search for "Cultural Revolution" in Baidu's trending discussions section leads to the following message: "There are currently no related discussions for this."

That is strange, considering China's social media is ablaze with discussions on this topic.

One answer to the riddle is that social media users are careful not to use the exact phrase "Cultural Revolution," knowing that internet censorship authorities are keeping a watchful eye. Discussions on that tumultuous period of Chinese history, from 1966 to 1976, have in effect become taboo.

What then to make of the term "profound revolution?"

It is a mysterious controversy that has everybody scratching their heads.

On Aug. 29, the internet sites of China's major media outlets published a commentary written by Li Guangman, a nationalistic, left-wing blogger, titled, "Everyone can sense that a profound transformation is underway!"

That it was carried by the People's Daily, the mouthpiece of the Chinese Communist Party; state-run Xinhua News Agency and state-run China Central Television (CCTV) gave it an air of authority. At least the leadership seemed to have given it their blessing. 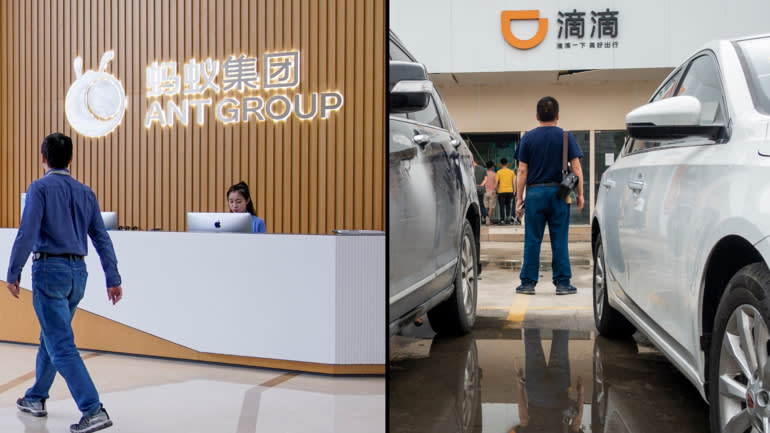 The suspension of Ant Group's initial public offering and other crackdowns come as Xi guides China to a place he calls "common prosperity." (Source photos by AP and Reuters)

Needless to say, the term "Cultural Revolution" is not used. But what is important is that the commentary used the highly agitative expression "revolution" in the text.

Pointing to recent actions in China -- including the suspension of Ant Group's initial public offering, the investigation into ride-hailing giant Didi Global and the crackdown on entertainment studios -- and noting the proposed path to "common prosperity," the commentary says: "What these events tell us is that a monumental change is taking place in China, and that the economic, financial, cultural, and political spheres are undergoing a profound transformation -- or, one could say, a profound revolution."

"Capital markets will no longer be paradise for get-rich-quick capitalists," Li wrote.

"We need to bring all forms of cultural chaos under control," he said.

The article's publication by all major Chinese media outlets came as a surprise to many intellectuals and party insiders.

"Isn't this a rejection of reform and opening-up and an indication that the Cultural Revolution is returning?" some asked.

"Cultural Revolution 2.0 is no pipe dream," said others. 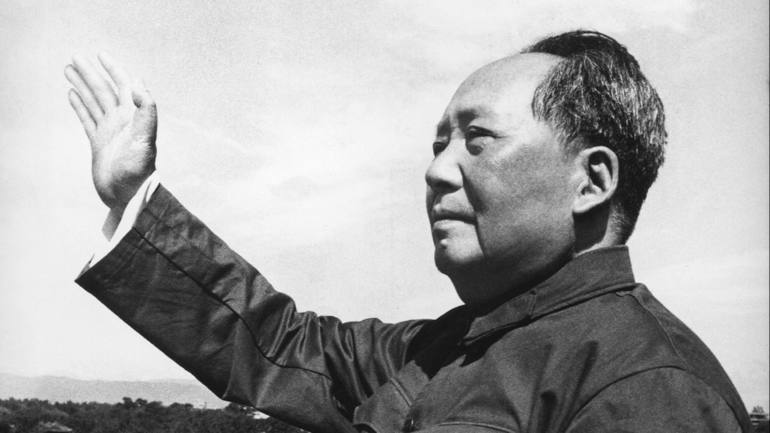 To those who know the China of the 1960s, the term "revolution" is a reminder of Mao Zedong's Cultural Revolution.   © AFP/Jiji

To those who know the China of the 1960s, the term "revolution" is a reminder of Mao Zedong's Cultural Revolution. The prelude to the Cultural Revolution was also a cultural commentary, one published in a Shanghai newspaper in 1965.

Attacking political enemies under the guise of discussing culture is a traditional method used by players in China's great game.

Further adding fuel to the fire, the crackdown on the television and entertainment industries intensified on Sept. 2.

To eliminate lowbrow and vulgar programs, the leadership issued a notice to TV stations across the country banning the use of entertainers whose political stances are inaccurate and who are not loyal to the party and state.

Truly puzzling, however, was a counterattack against Li's article launched by Hu Xijin, the firebrand editor-in-chief of the Global Times, a newspaper affiliated with the People's Daily.

"I think the article has offered inaccurate descriptions of the situation, used some exaggerated language, deviating from the country's key policies, and has misled people," Hu said in an article posted online.

Hu is known for talking tough externally; he is also thought to speak for the Xi administration.

Considering that it was also a People's Daily-affiliated website that first reposted Li's article, the two commentaries pose a contradiction.

If both Li and Hu were taking orders from above, does it suggest a major rift in the leadership?

Perhaps the answer is not that simple.

One thing that is clear is that Xi's leadership team does not want the "common prosperity" drive to be taken as a revolution. This is what Hu stressed.

Revolution means regime change. For a country that has benefited most from the era of economic globalization, starting a revolution that denies the "socialist market economy" of Deng Xiaoping doesn't make sense.

Hu hammered this point by noting he has contact with many people within the regime but has never heard any of them speak of the kind of political movement Li envisages, neither at meetings nor privately. This aside sounds as though it came on orders from above.

As this column pointed out last week, the party's Publicity Department released a key document on Aug. 26 that contains an evaluation of the Cultural Revolution in one of its footnotes.

The Cultural Revolution, the footnote says, "refers to the tumultuous political movement ... initiated by Mao Zedong."

"It caused great harm to the Party, the nation, and the people," it goes on to say.

"This is a move to test the waters." 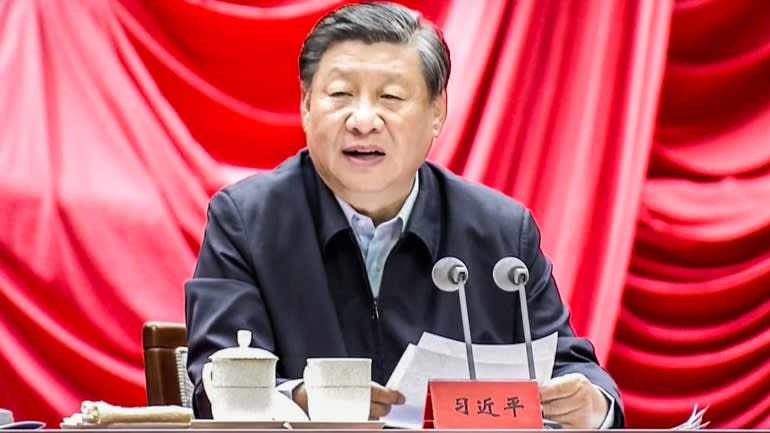 Delivering a lecture at the Central Party School on Sept. 1, Xi tells young officials they need to "dare to struggle."   © CCTV/Reuters

The source's interpretation is that Li and Hu, who are both close to the administration, engaged in an online battle to gauge how leftists and rightists inside and outside the party would react.

On Aug. 31, the party's Politburo held a meeting and announced a decision to hold the sixth plenary session of the party's 19th Central Committee in November.

The Politburo also announced that the sixth plenary session will mainly discuss "the issue of comprehensively reviewing the major achievements made and the historical experience accumulated during the Party's 100 years of endeavor."

The document released by the Publicity Department on Aug. 26 could serve as a basis for discussion about the party's history.

Under the communist regime, important policies are sometimes announced without prior notice to rank-and-file party members or ordinary people. In some cases, not even announcements are made, and orders are issued abruptly.

Typical examples are the suspension of Ant Group's listing, major Chinese video platforms removing Zhao Wei's name from the credits of many of the works the well-known actress starred in and deleting the works themselves.

However, when it comes to big and potentially divisive issues, Chinese authorities sometimes follow different procedures. Using a no-name figure to float an idea is one such method.

The fact that Li's controversial article was not published in official print newspapers is another sign that leadership was testing the waters. Articles put in print cannot be deleted later and carry more weight.

All the while, this great controversy played out while avoiding the most important keywords, "Cultural Revolution."

Lying at the root of all this is the Xi-led policy of pursuing common prosperity. The idea of a radical change aimed at eliminating disparities is not yet fully understood, partly because it has not been sufficiently explained. As such, the idea has stoked strong concerns.

Zhang Weiying, a Peking University professor, recently expressed his objections to the "common prosperity" drive, saying increased government involvement will only lead to "common poverty." His opinion was later deleted.

Chinese Vice Premier Liu He, an economic adviser to Xi, in effect responded to Zhang in a speech on Monday.

The policy of developing the private sector remains unchanged, he said, adding that China will firmly maintain the basic economic system in the primary stage of socialism. 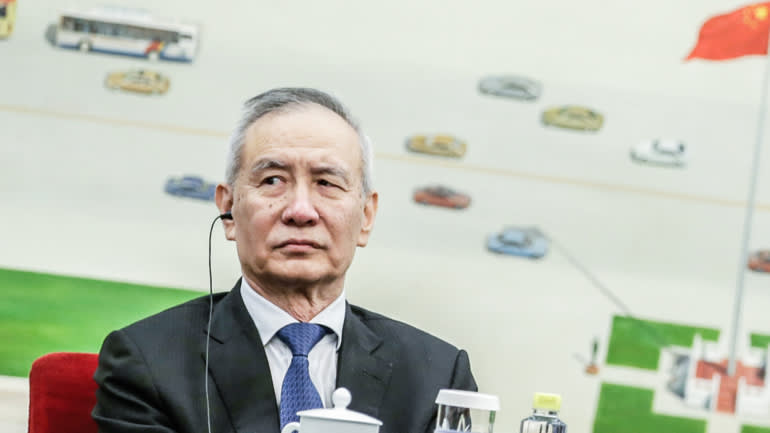 Chinese Vice Premier Liu He, an economic adviser to Xi, entered the fray when he delivered a speech on Sept. 6. (File photo by EPA/Jiji)

Liu was saying China will not return to the Cultural Revolution-era equality principle aimed at defeating capitalists.

If Xi were to test the waters of the "common prosperity" debate, he would find the blazing temperatures not yet suitable for everyone to bathe comfortably.

Signaling that the Deng Xiaoping era is over but not rejecting Deng's reform and opening-up path is the fine line Xi needs to walk. No easy task, but Xi does not appear to be daunted by it.

Delivering a lecture at the Central Party School on Sept. 1, Xi told young officials they need to "dare to struggle."

"Communists should have character, integrity and courage," he went on, "so that we'll never be taken in by fallacies, never tremble in the face of danger and never be spineless cowards."