Scholars have urged Chinese President Xi Jinping to abandon Russian leader Vladimir Putin. Xi has yet to do so. (Nikkei montage/Reuters)
China up close

But if China's economy suffers from bond with Moscow, a power struggle awaits

Why is Chinese President Xi Jinping so tenacious in sticking to his Russia-friendly stance despite the carnage in Ukraine?

One key to solving the mystery may be a remark he made 10 years ago.

In December 2012, just weeks after taking the helm of the Chinese Communist Party, new General Secretary Xi said that China must learn lessons from the collapse of the former Soviet Union.

"Finally, all it took was one quiet word from Gorbachev to declare the dissolution of the Soviet Communist Party, and a great party was gone," he said, referring to the Soviet Union's last leader, Mikhail Gorbachev. "Nobody was a real man. Nobody came out to resist," he lamented.

Xi's sympathy for the Soviet system sent shock waves through the Chinese Communist Party, especially the reformist wing, which was still active back then.

Looking back, Xi's remarks resonate with Russian President Vladimir Putin's philosophy fueling his invasion of Ukraine: a desire to revive Soviet-era glory, and a strong distrust of the West. Xi's December 2012 remarks were made in Guangdong Province to local officials.

His choice of Guangdong as his first inspection destination raised hopes that the new leader might be a reformer in his own right. Comparisons were made to former leader Deng Xiaoping's "southern tour" of 1992, which gave new momentum to Deng's signature "reform and opening-up" policy.

The younger Hu told a private meeting, "It was the people of the Soviet Union who drove the corrupt Communist regime from power. Soviet service members withheld from shooting their bullets. Are they being criticized for not being men?" he asked in blunt fashion. Such freewheeling words and deeds in China are now unthinkable.

A veteran Chinese party member shared an interesting take on the roots of Xi's affinity for the Soviet system.

"He was taught as a child that the Soviet Union was fantastic, that it was a great and strong country. Similar traits can be seen in his sense of nostalgia for the Cultural Revolution and the Rustication Movement," the elder said, referring to Mao Zedong's notorious policies that purged capitalists and sent "intellectual youths" in urban areas to the countryside to work and live. 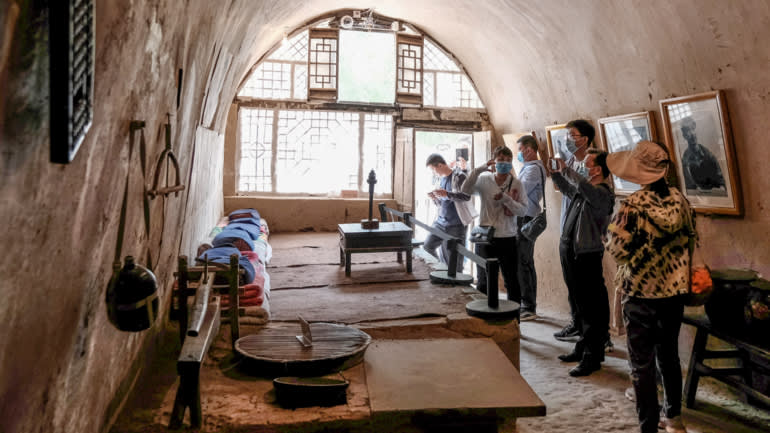 People visit a "cave" dwelling where a "sent-down" Xi Jinping once lived, in Shaanxi Province.    © Reuters

Xi himself experienced "sent-down" life in Liangjiahe, a farming village near Yan'an city in Shaanxi Province, between 1969 and 1975.

He did not need to promise Putin friendship and cooperation "with no limits" when they met in Beijing on Feb. 4. China also did not need to go so far as to object to NATO's eastward expansion in the joint statement, taking sides with Russia. But Xi did, and it clearly binds Beijing's options.

Meanwhile, when Xi and U.S. President Joe Biden held a virtual meeting Friday, the American leader emphasized that China should not provide military and economic support to Russia. But Xi remained noncommittal. The only clear stance Xi took was to oppose Western sanctions against Russia.

Xi was not ready to make any concessions, yet he agreed to the call anyway. China is said to have refused an online summit for months. Why now?

His aim was to unite China's leadership over Ukraine, using Biden for that purpose. The party was close to disarray, unable to agree on a coordinated response. But thanks to the Biden summit, it seems that Xi managed to keep the leadership in line, maintaining a somewhat ambiguous, Russia-leaning "neutral" stance. The primary reason for the feuding within the party is the harm inflicted on China's economy by Russia's war in Ukraine.

Chinese stock prices plunged March 14 and 15, with the Shanghai Composite Index almost dipping below 3,000. The market stabilized only after Vice Premier Liu He, a close aide to Xi, indicated the government was willing to listen to investors and make compromises at an emergency meeting March 16.

Xi's economic policies, which pressure the private sector to tow the party line in the name of preventing the "disorderly expansion of capital," have reached a turning point.

Chinese Foreign Minister Wang Yi made one of his most blunt statements to date in a March 14 phone call with his Spanish counterpart, referring to the Ukraine conflict.

"China is not a party directly involved in the crisis, and it doesn't want to be affected by sanctions," Wang said. 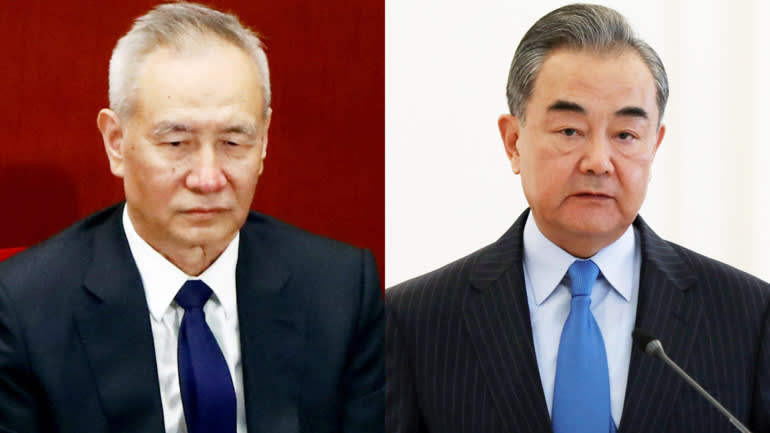 That same day, Wang Huiyao, the top official of the Center for China and Globalization, a Beijing think tank that says it advises the Chinese government, contributed an opinion piece to The New York Times that took a position slightly different from the government's official line.

"It's time to offer Russia an offramp," he wrote.

Beijing could help broker an immediate cease-fire, while seeking "a solution that gives Mr. Putin sufficient security assurances that can be presented as a win to his domestic audience while protecting Ukraine's core sovereignty," the scholar said.

"It is not in Beijing's interests to rely solely on an anti-Western alliance with Moscow. Russia may possess a mighty military, but its economy is in long-term structural decline, with a GDP not much larger than that of Spain," he noted.

This is a new type of "public diplomacy" for China, having a scholar act as a mouthpiece over a topic when it is difficult for the government itself to comment. The message was sent as a means to avoid sanctions.

It followed a controversial article by scholar Hu Wei the week before that called on the government to cut ties with Putin immediately.

Both scholars discussed the importance of maintaining economic relations with the West, something Xi cannot ignore. If China sticks with Russia too long, resulting in a decisive clash with the West, the economic blow could be massive.

Such a scenario could trigger a power struggle in China, regardless of how much power Xi has amassed over the past decade. Damage after a Russian attack on the Retroville shopping mall in a residential district of Ukraine's capital, Kyiv, on March 21.    © AP

One cannot emphasize enough just how sensitive the upcoming months will be in China. Just over six months remain before the Communist Party's quinquennial national congress, where Xi will seek to extend his rule.

If history is a lesson, this month of March is particularly important from the viewpoint of Chinese power struggles. In March 2012, major developments rocked Chinese politics on a daily basis.

First, the high-flying top official in Chongqing, Bo Xilai, was removed from office March 15, 2012, shortly after the close of the annual parliamentary session. In the early hours of March 18, the son of Ling Jihua, a close aide to then-Chinese President Hu Jintao, died mysteriously when the Ferrari he was driving crashed at high speed on Beijing's 4th Ring Road.

The road accident ignited a scandal that led to the downfall of Ling, who was serving as head of the party's general office at the time.

Ling's plot to cover up the scandalous accident involving his son was later revealed by former Chinese President Jiang Zemin, and this affected the lineup of new leaders chosen at the 2012 party national congress. Hu Jintao was unable to get his proteges in power due to his weakened standing.

On the night of March 19, gunfire rang out in central Beijing, sending shivers through the Zhongnanhai area, where Chinese dignitaries have their offices. The sound of gunfire sparked rumors of a coup. The true nature of the gunfire remains unknown.

A decade later, China faces another politically sensitive season. The greatest risk for Xi is the economy. In addition to the uncertainty over the war in Ukraine, a fresh wave of coronavirus infections in various parts of China and the resulting lockdowns in cities have put downward pressure on the economy. Xi cannot let down his guard.