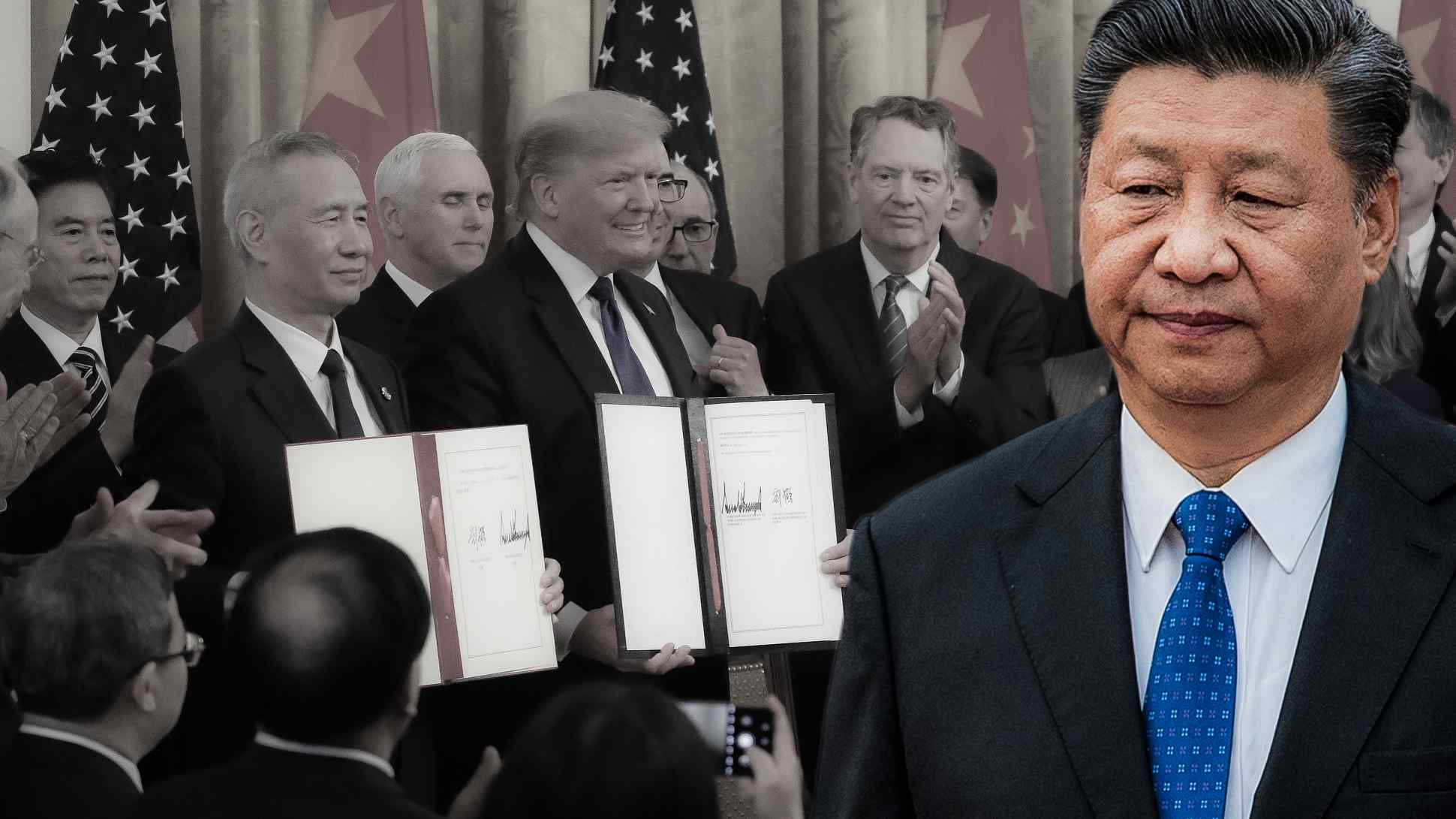 Chinese President Xi Jinping's demeanor lately has some people in China wondering why he has been "so grumpy." (Nikkei Montage/ Source photo by Reuters and Getty Images)
China up close

Battle for hegemony: Xi knows there is no middle ground with US

TOKYO -- The U.S.-China "phase one" trade deal that was signed by U.S. President Donald Trump and Chinese Vice Premier Liu He was pushed back to the 10th item on state-run China Central Television's main evening news program on Jan. 16.

With coverage spanning 1 minute and 44 seconds, it could easily have been missed, unless viewers remained glued to their televisions. The news was intentionally trivialized.

There is an interesting inside story told by a source in Beijing about how the deal was perceived in the Chinese capital, even amid the excessive censorship.

"If the U.S. mainstream media is portraying this as a big victory for Chinese President Xi Jinping, they have no idea of the Chinese situation," the source said.

"How come the Chinese government reported the news in such a small way, and why are they not allowing the people to discuss it? And why is Xi so grumpy?"

Rumors that Xi has been unhappy in recent weeks have been swirling. There were eyewitness accounts that Xi was in an unusually foul mood when the leader stayed in Macao at the end of last year to attend a ceremony commemorating the 20th anniversary of the former Portuguese colony's return to Chinese rule. Despite the public smiles, he is said to have been far from jovial. In his public appearances, like this one in Macao on December 18, 2019, Chinese President Xi Jinping has been smiling.   © Reuters

While the exact reasons for his grumpiness are unknown, there are at least two decisions that Xi has had to make against his will.

The first was about the content of the phase one trade deal, which Washington and Beijing had agreed to ahead of the Macao ceremony. The Chinese public remained in the dark as to the details.

Now with the full text of the partial deal -- 88 pages in Chinese -- released, it shows line after line that begins with "China shall ..."

It is page after page of Chinese responsibilities, many with numerical targets such as expanding imports from the U.S., and contains a mechanism to verify China's compliance. It also specifies U.S. rights to take countermeasures if China is judged to be in breach of the agreement.

Despite China's near-unilateral commitments, the deal does not pave the way for the complete removal of American tariffs, which the Xi administration had adamantly sought during negotiations.

As the "core" leader of the Chinese Communist Party, Xi cannot be seen signing an unsatisfactory agreement. This is likely why it was Liu He and not Xi that went to the White House, creating a highly unbalanced signing ceremony between the U.S. president and a much lower-ranking Chinese official.

Liu was made to stand beside Trump for nearly one hour as the American leader continued to tout the agreement as a major accomplishment, in sound bites that should come in handy during the presidential election campaign. 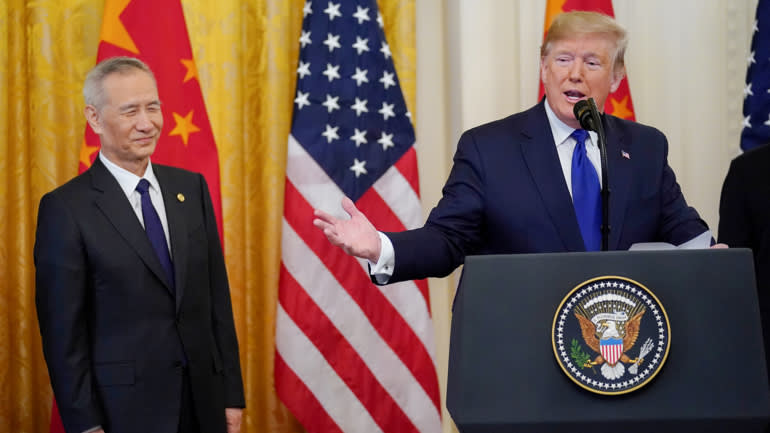 With Chinese Vice Premier Liu He by his side, U.S. President Donald Trump spoke in sound bites that could make their way into campaign commercials later this year.   © Reuters

The other major decision Xi had to make was over Hong Kong.

Early in the new year, China announced the abrupt dismissal of Wang Zhimin, the 62-year-old head of the Chinese government's liaison office in Hong Kong who had been in office a little more than two years. It was an unusually swift firing, with his handling of the unrest in Hong Kong proving to be his undoing.

Not only are the protests still going after seven months, pro-China forces suffered a resounding defeat in the Hong Kong district council elections. Furthermore, the Hong Kong issue has hamstrung China's diplomacy toward the U.S., as the Hong Kong Human Rights and Democracy Act came into law with Trump's signature.

The issue here is that Wang belongs to Xi's political faction. He was promoted after working in Fujian Province, where Xi also once worked, and put in charge of the Hong Kong situation.

Nevertheless, Wang was dismissed. It has all the traces of a fierce power struggle within the Chinese Communist Party.

No wonder Xi has been grumpy.

Wang's replacement is Luo Huining, 65, who has no previous Hong Kong-related job experience.

The pressure Luo faces is extraordinary, and it showed in an initial public appearance.

When Luo spoke for the first time in front of reporters in Hong Kong, his legs were shaking. Sharp-sighted Hong Kong media cameras did not miss Luo's black trousers moving as he spoke with a forceful voice.

Luo previously served as the party's secretary of the provinces of Qinghai and Shanxi. During his time in the two provinces, he dealt only with government-controlled media outlets often said to be "the throat and tongue" of the party.

The Hong Kong media is a different beast, and the trembling showed Luo understood he can ill afford to fail.

Next up is "phase two" of the trade negotiations, which hold the keys to China's path in 2020 and beyond. Will the American tariffs be completely eliminated?

One source familiar with the negotiations notes that the phase one deal is in effect "around one-third" of the content of an original agreement that unraveled.

An approximately 150-page draft text that was on the table in April included reforms of state-owned companies and the abolition of opaque subsidies. Beijing later took back these concessions as it feared they could shake the party's authoritarian rule.

Initially, Xi was confident. After saying no to Trump, Xi himself hoisted the flag of zi li geng sheng (self reliance), comparing his country's anticipated protracted war with the U.S. to the grueling 1934-1936 Long March of the Chinese Communist Party's army.

But Xi miscalculated. China's economy, which had already been slowing, was dealt a heavy blow by Trump's additional tariffs.

Eight months since Beijing took back those concessions, foreign companies continue to move production out of China. Disruptions to supply chains involving China have also progressed at a considerable pace.

Xi's miscalculations have also affected Taiwan. In the island's presidential election on Jan. 11, incumbent Tsai Ing-wen of the pro-independence Democratic Progress Party won a sweeping victory. She was reelected after saying no to Xi's proposal to achieve China-Taiwan unification under a "one country, two systems" formula.

Much has been lost during the wasted eight months. The wounds suffered by China's economy will take time to heal. Small and medium-size private companies have gone bust. Employment has deteriorated.

These matters will give Xi headaches as he seeks to lay a track record of economic success. 2020 is the year China set as a target for doubling its gross domestic product, or GDP, compared to 2010 levels. There were fears that the target would be missed if the rate of growth was too low this year.

Beijing dodged that bullet by revising up past statistical figures.

But cheap tricks will not be applicable in realizing Xi's most important public pledge to "catch up with and overtake the U.S. economically by 2035." The target year was approved, along with Xi's "new era," at the party's last national congress, in 2017.

If growth in the Chinese economy continues to decline after slipping below 6%, the 2035 target could become elusive. 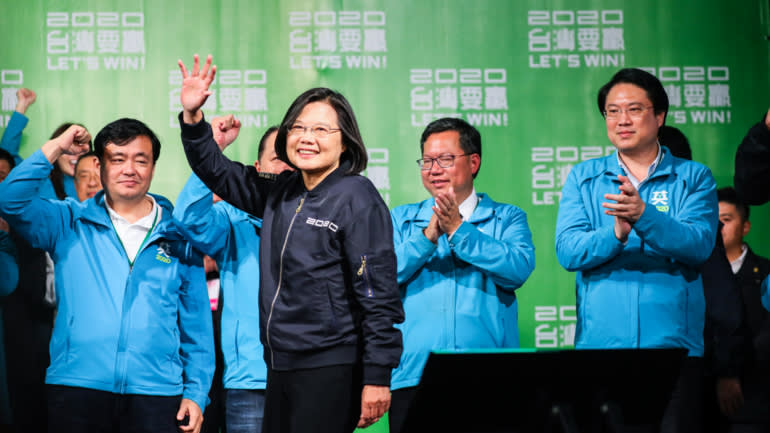 Taiwanese President Tsai Ing-wen was reelected earlier this month, with an assist from Xi Jinping. (Photo by Akira Kodaka)

If one stops to think about why the Trump administration embarked on its current hard line China policy, two things stand out: Xi's 2035 target and the steps China began to take to surpass the U.S.

If Xi's new era indeed materializes and proves long-lasting, it will spell the end of America's heyday.

Such concerns in the U.S., on both sides of the aisle, have led to a concerted effort to suppress "China's ambitions."

Xi's revising of the constitution to scrap presidential term limits and his driving out political foes through an anti-corruption campaign irreversibly and critically impacted U.S.-China relations. It is impossible to simultaneously have China be the world's No. 1, led by an unrivaled Xi as leader, and achieve a truly stable U.S.-China relationship.

Hypothetically, if Xi completely abandons the goal of surpassing the U.S. and he himself retires at the party's next national congress, in 2022, then maybe a path to China-U.S. coexistence can be found.

But given the current state of party politics in China, that also is impossible.

Therefore, the life-or-death battle for hegemony between the U.S. and China will go on unabated.

Structural issues that are related to the maintenance of the party's authoritarian rule will feature high on the agenda in the second phase of trade negotiations. How will the talks proceed after the cease-fire is over?

The answer will have consequences for the global economy, diplomacy and security.