Why Oct. 23 was too risky for Xi to green light

TOKYO -- In an episode that illustrates the sensitive nature of Sino-Japan relations, Tokyo and Beijing seem to be pulling their punches over the itinerary of Shinzo Abe's official China visit, the first by a Japanese prime minister in seven years.

Nearly a month ago, the governments had agreed Abe would arrive in Beijing on Oct. 23 for a three-day visit. During his stay, Abe would tour Shenzhen, China's tech hub and the home of Huawei Technologies and Tencent Holdings.

The date was fitting. On Oct. 23, 1978, Chinese leader Deng Xiaoping had visited Japan to sign the Sino-Japanese peace and friendship treaty. After arriving in Beijing, Abe would be welcomed with a lavish gala to commemorate the 40th anniversary of the treaty. The plan looked pitch perfect.

But the Chinese side had overlooked another anniversary that falls on Oct. 23.

This year marks the 150th anniversary of Japan's Meiji Restoration, which ended the rule of the Tokugawa shogunate and paved the way for a small and closed country in the Far East to become an important player on the international stage.

On Oct. 23, 1868, Japan left the Edo period and entered the Meiji era, in the wake of Emperor Meiji's ascension to the throne. His great-grandson, Emperor Akihito is set to attend an event commemorating the Meiji Restoration on the morning of Oct. 23, and Abe will deliver a speech.

The prime minister's plans called for him to fly to Beijing after the Meiji event.

Why is this Japanese anniversary a problem for China?

The Meiji era saw the First Sino-Japanese War (1894-1895), which China lost and ended up ceding the Liaodong Peninsula, Taiwan and Penghu Islands to Japan. It marked the beginning of a series of conflicts with Japan that include the Manchuria Incident in 1931, and the Second Sino-Japanese War (1937-1945).

How Abe, a conservative politician, evaluates the countries' history of conflicts -- as well as current bilateral relations in the Heisei era -- in his Oct. 23 address is a matter of great concern to China.

For Beijing, having Abe arrive hours after delivering a speech that will likely touch on these matters was too risky. However slim the chances, Abe could, in theory, deliver a scathing criticism of China, perhaps regarding the South China Sea. 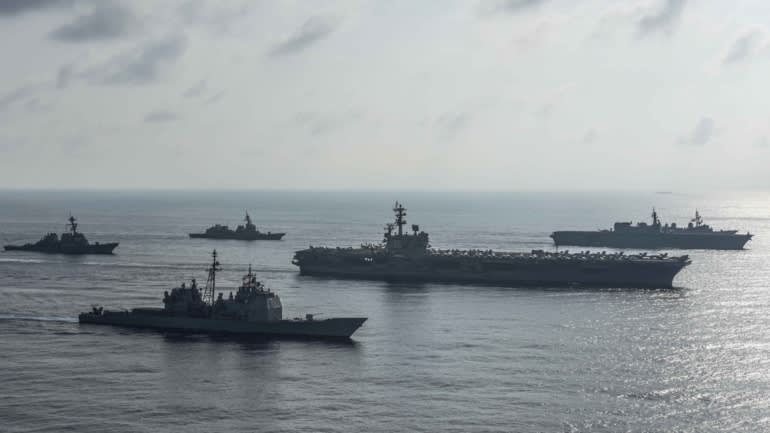 China is feeling uneasy about Japan's recent moves in the South China Sea. Japan in mid-September announced it had conducted anti-submarine exercises in the sea by dispatching a submarine and destroyers of the Maritime Self-Defense Force.

The mandarins in Beijing could not afford the possibility of Xi Jinping losing face, considering the delicate political situation the president currently finds himself in.

If possible, Beijing wants to know in advance at least the outline of China-related portions of Abe's Meiji anniversary speech. Tokyo, however, could never tolerate sharing such information. Abe would not be able to withstand the domestic criticism if it were discovered he had passed notes to China beforehand.

If China were to follow its traditional playbook, it would have punted -- significantly delaying the visit until perhaps when the public forgets about the Meiji Restoration speech. But amid its tense relations with the U.S., and with the opportunity of bringing Tokyo into its court, Beijing did not call its signature play.

On Oct. 4, U.S. Vice President Mike Pence delivered a hard-line speech hitting out at China from all angles. Pence's harsh words made it clear that the U.S. does not expect relations with China to warm anytime soon.

Xi's game plan envisions China becoming the dominant global power while he is in office. But Pence's fiery speech shows the U.S. seeks to prevent this at any cost.

Amid this tension, Beijing settled for the next best thing with Abe's visit -- a delay of two days.

The Japanese leader is now scheduled to visit on Oct. 25-27. The new itinerary will allow China to call off the visit at the last minute if Abe dares to provoke China in his Meiji speech.

Thus the itinerary for the first official China visit by a Japanese prime minister in seven years was finally fixed.

The new schedule, however, does not allow Abe to visit Shenzhen while making good on his commitment to attend the extraordinary session of the Diet, Japan's parliament. The Shenzhen tour was scrapped. Protesters chant, "Territorialize Japan as a Chinese province" in Beijing in September 2012.

Be that as it may, a significant change in the Chinese government's stance on Japan is clear.

This change comes six years after tensions flared between the two countries over Japan's nationalization of the Senkaku Islands, a group of small uninhabited islets in the East China Sea which China calls the Diaoyu.

In September 2012, a wave of anti-Japanese protests swept through China, with some demonstrators chanting a radical slogan, "Territorialize Japan as a Chinese province." Chinese authorities did not call for cool heads to prevail. 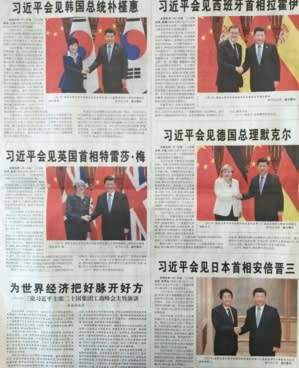 The People's Daily ran these photos while China hosted the G-20 summit in Hangzhou, Zhejiang Province, in September 2016. There are no flags in the picture of Shinzo Abe and Xi Jinping.

Until as recently as 2016, Chinese diplomatic and propaganda authorities were singling out Japan for "discriminatory treatment" during international conferences that China hosted.

At the Group of 20 summit in China in September 2016, the Xi-Abe talks were the only bilateral meeting where the Chinese side did not prepare national flags in the background for the official photo.

More recently, there has been a dramatic turnaround in Beijing's treatment of Japan, as evidenced by the hastily arranged visit to Japan by Xu Lin, China's new director of the State Council Information Office.

The 55-year-old ministerial-level official concurrently serves as the deputy head of the Chinese Communist Party's Publicity Department, which operates the country's propaganda machine.

Xu once served as the party propaganda chief in Shanghai and is said to be a Xi protege.

He delivered the keynote at the Tokyo-Beijing Forum in the Japanese capital on Sunday. To be sure, he referred to the two countries' bitter history together but did not harp on the issues like Chinese officials would have done in the past.

Instead, Xu highlighted the need to "protect multilateralism," especially on the trade front.

In this way, Xu took an indirect jab at U.S. President Donald Trump. 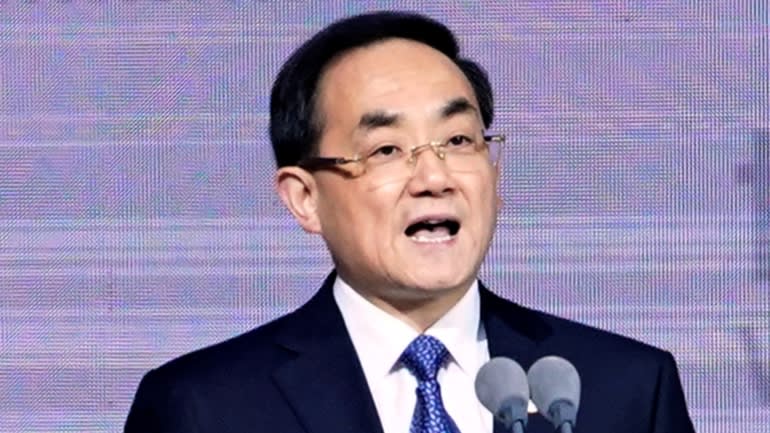 China became noticeably enthusiastic about promoting economic relations with Japan this past spring.

Exchanges between the countries' public and private sectors have been surprisingly brisk since May, when Chinese Premier Li Keqiang paid an official visit to Japan.

On Friday, a Sino-Japanese arts exchange event was held at a Kyoto concert hall. The municipal government of Shanghai, where Xu once worked, was one of the organizers.

Tanimura is known for his hit "Subaru," which many Chinese in their 50s or older can sing. Tanimura made his first trip to China as a member of the music group Alice in 1981, when former supreme Chinese leader Deng took full control of the country.

Japanese songs and TV dramas were the first pieces of foreign pop culture that ordinary Chinese came into contact with after the 1966-1976 Cultural Revolution. They were tangible benefits to Deng's "reform and opening-up" policy, initiated in December 1978 -- two months after the Sino-Japanese peace and friendship treaty came into force.

That was a long time ago. Now China is one of the world's two great powers and is battling the U.S. to be the future hegemon.

As China and the U.S. turn up the heat of their conflict and jolt the post-World War II international order, they are significantly impacting Sino-Japanese relations -- or at least making them less nasty.

Perhaps Shinzo Abe can expect his country's flag to stand behind him when he shakes Xi Jinping's hand next week in Beijing.