China's high-speed trains have been named "Fuxing," or rejuvenation, in accordance with Chinese President Xi Jinping's slogan of the "great rejuvenation of the Chinese nation." (Nikkei montage/Getty Images)
China up close

TOKYO -- You don't need a crystal ball to predict whether Chinese President Xi Jinping is planning to stay in office beyond 2022. Just take a ride on a Chinese high-speed train.

"Do try the high-speed train," one Chinese acquaintance suggested. "You will understand that President Xi Jinping's era is going to last a long time."

The meaning of his words quickly became clear.

Shown on the screens suspended from the ceiling of the second-class carriages was a video about China's constitution.

The screens, similar to those inside airplanes, first showed children learning about the constitution's preamble. A close-up of a blackboard featured the slogan "rule based on the constitution." A passenger sits in China's "Fuxing" high-speed train which runs from Beijing to Tianjin at Beijing South Railway Station.   © AFP/Jiji

A similar slogan, "rule of law," is often heard in China. But to mention the rule of the constitution is unusual.

Why is China suddenly promoting the constitution? The answer lies in the surprise revision of the charter a year ago at the annual session of the National People's Congress, the nation's rubber-stamp parliament.

At that time, the term limits for the Chinese president -- two five-year periods -- were scrapped. China also added to the preamble the president's own philosophy, the so-called "Xi Jinping Thought on Socialism with Chinese Characteristics for a New Era."

These two constitutional amendments came as a package.

The new political propaganda campaign was launched on trains to encourage ordinary Chinese to study the revised constitution, with an eye on the Communist Party's next five-yearly national congress in 2022.

The new campaign can also be interpreted as a call for national unity in accordance with the centralized, unified leadership of the Communist Party's Central Committee "with Xi as its core," amid domestic economic woes partly caused by the U.S.-China trade war.

Xi's new era has spilled over into the naming of high-speed trains too. The newest trains are called "Fuxing Hao" after a slogan the president himself has advocated: the "great rejuvenation of the Chinese nation." Fuxing means rejuvenation.

The Fuxing trains are slowly replacing the trains named during the era of Xi's predecessor Hu Jintao, the "Hexie Hao," meaning harmony.

Yang Jisheng, a former senior writer for China's state-run Xinhua News Agency, once said in an interview that: "Although there is a constitution in China, people cannot hold discussions freely regarding 'constitutional politics'." 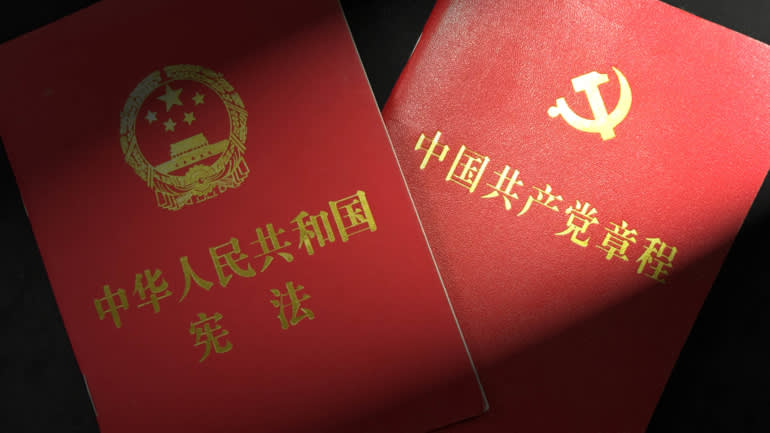 The Chinese constitution stipulates that the Communist Party guides the country in every aspect. (Photo by Katsuji Nakazawa)

According to Yang, who later served as editor of the reformist magazine Yanhuang Chunqiu, people cannot discuss constitutional politics freely because "it is reminiscent of a political system based on democratic elections in the West."

Despite its emphasis on the rule of law, China does not embrace a Western-style separation of the legislative, judicial and executive powers.

Instead, the constitution stipulates that the Communist Party guides the country. This means the party can give commands to everyone, including the military, the government, the parliament, courts and prosecutors.

That rule of law applies to Chinese telecommunications equipment maker Huawei Technologies, at the heart of the U.S.-China battle for technological supremacy.

Without question, Huawei is China's leading private company, bristling with advanced technologies. But unlike private companies in the U.S., Europe and Japan, it has inside it an internal Communist Party cell representing the party's interests. It plays a central role in the company's decision-making.

Furthermore, Xi and his team have officially advocated "military-civilian integration," combining technology from the People's Liberation Army and from private companies to advance China's security. Soldiers of the People's Liberation Army attend a flag-raising ceremony in Beijing's Tiananmen Square ahead of the opening session of the National People's Congress on March 5.   © Reuters

While Premier Li Keqiang made no direct reference to the "Made in China 2025" plan in his speech at the annual session of the National People's Congress, he did speak of "military-civilian integration," as he has done in the past. China's basic policy remains unchanged, despite the political considerations to the U.S. in light of the trade talks.

Military-civilian integration is not something that Huawei has requested. Yet, as long as China's constitution clearly advocates the Communist Party's supreme guidance, the party is free to instruct all Chinese private companies as it sees fit. This is how the "rule of law" applies to the Chinese economy.

Forced technology transfers by private Chinese companies and subsidies for state-owned companies, a joint endeavor between the Communist Party and the Chinese government, are among the sticking points in the U.S.-China trade negotiations.

The issues raised by the U.S. are essentially questions about how the rule of law operates in China.

Communist Party rule has strengthened under Xi. Although China had been gradually expanding private companies' freedom since it introduced Deng Xiaoping's policy of "reform and opening-up" in 1978, the tide has turned under Xi.

At the Communist Party's last national congress in 2017, Xi called for stronger guidance by the party in all areas. As a result, party committees have been set up inside many more organizations and more policymaking commissions have been established within the party's Central Committee, which takes precedence over the Chinese government.

The way state-owned companies are treated has also changed as the Communist Party believes they have an important role in controlling the economy and society. A photo exhibition of Xi Jinping's achievements is seen in Beijing. The general public is beginning to acknowledge that Xi's rule will extend beyond 2022. (Photo by Akira Kodaka)

China has pursued a policy of making state-owned companies larger in the past few years -- a dramatic shift away from the "market-oriented" policy adopted at the third plenary session of the 18th Central Committee in the autumn of 2013.

There are many people within the Communist Party and the Chinese government who are concerned about making state-owned companies larger, especially faced with the current economic slump and the Sino-American trade war.

But they are not in a position to speak out. The Xi regime is discouraging public questioning of the leadership's decision-making and any Chinese official who does so risks his or her chance for promotion or even their current job.

If Xi is to extend his tenure as leader in 2022, and the Chinese public are starting to feel that the Xi era will continue for a long time, it is difficult for anyone to take the risk of expressing dissent now.