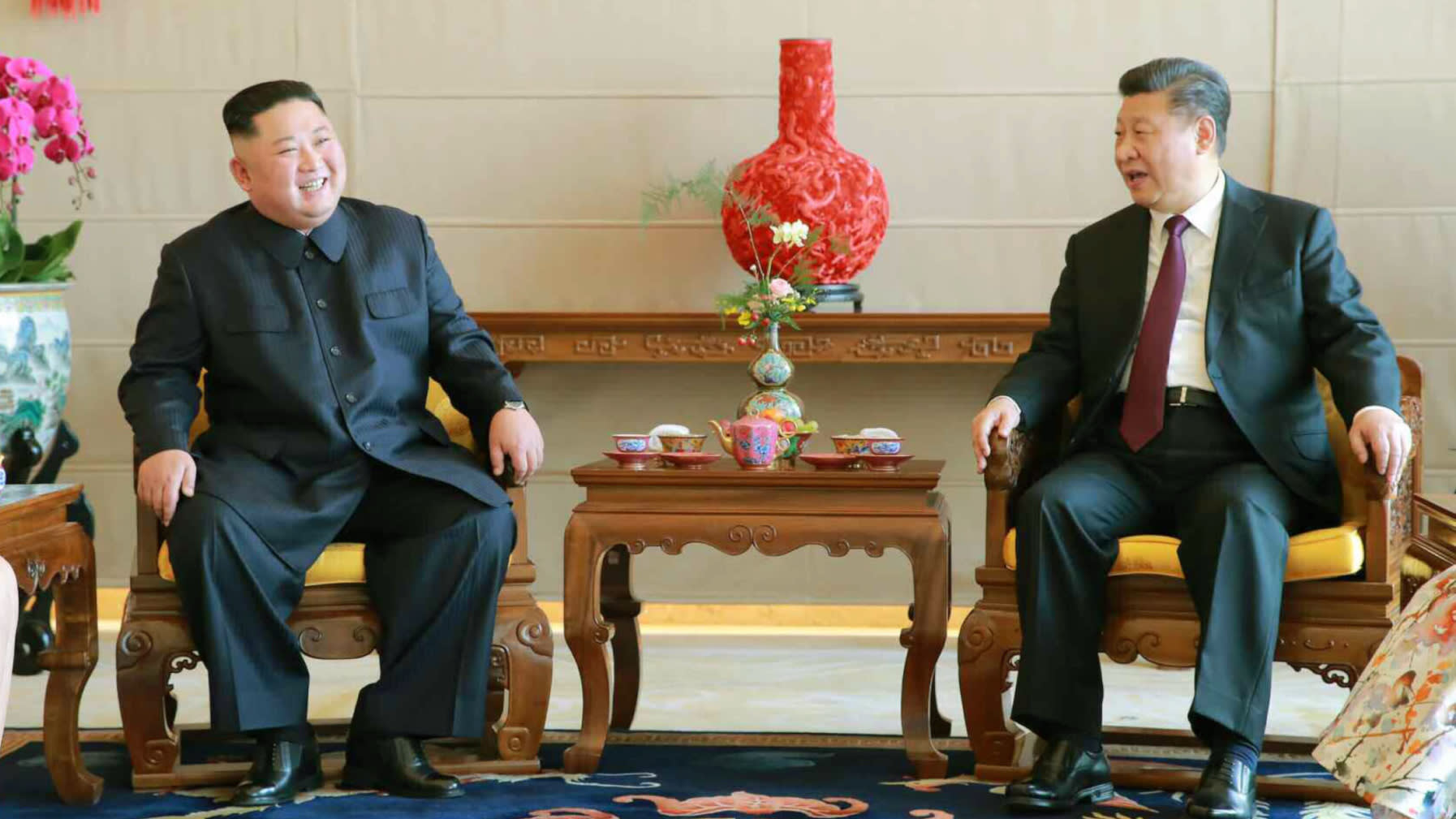 North Korean leader Kim Jong Un, left, and Chinese President Xi Jinping talk ahead of lunch at the Beijing Hotel on Jan. 9. U.S. trade negotiators were in meetings with Chinese counterparts across the street.   © Kyodo
China up close

TOKYO -- The U.S. trade delegation sitting in Beijing's Ministry of Commerce on Jan. 9 must have wondered what the fanfare was across the street.

Diagonally across the wide Chang'an Avenue, in the long-established Beijing Hotel, Chinese President Xi Jinping and North Korean leader Kim Jong Un were having a working lunch, under heavy security.

It was an unusual venue. Usually, official meals for visiting heads of state are served at the Great Hall of the People or the Diaoyutai State Guesthouse, but with this being the fourth Chinese-North Korean visit in a year, the two leaders chose to hold their lunch at a hotel, as if to show their deepening friendship.

The American negotiators, then on their third day of talks, might have been forgiven for feeling under pressure. Here they were on the instructions of U.S. President Donald Trump trying to secure Chinese concessions on trade, but taking place just steps away was a meeting between Xi and Kim; something equally important to Trump.

The last time Xi hosted Kim in China, in May last year, Trump became so sensitive to what they might have been plotting that he abruptly canceled a historic Singapore summit with Kim planned for the following month.

"President Xi is a world class poker player," Trump said, days later, displeased at how North Korea's stance had visibly hardened after the Xi-Kim meeting held in the northeastern Chinese city of Dalian. A member of the U.S. trade delegation to China leaves a hotel in Beijing on Jan. 7.   © Reuters

While the Singapore summit ultimately took place in June, Trump's suspicion toward Beijing lingered, and U.S.-China relations have been sliding downhill ever since.

It was, therefore, a risky move for Xi to host Kim for the fourth time in a year last week.

Xi held two days of talks with Kim on Jan. 8-9 in Beijing. The surprise trip coincided with Sino-American trade negotiations in the capital that also grabbed global headlines amid bilateral tensions over economic issues.

The message seeping out from the Chinese side indicates that it was a mere coincidence that these two high-profile international events took place in the Chinese capital simultaneously.

"The itinerary for Kim's China visit had been set early on," a Chinese source explained. "The dates for the trade negotiations were designated by the U.S. side and overlapped by chance."

Said another: "Sino-North Korean relations, which work on a party-to-party basis between the Chinese Communist Party and the Workers' Party of Korea, are totally different from Sino-American relations, which are the most important diplomatic relations for China."

But regardless of intention, what counts in diplomacy is the image that the action projects. In this case, it comes down to how the U.S. government and Trump himself saw the simultaneous events. Xi must walk a tightrope between the competing interests of Washington and Beijing to avoid repeating last year's diplomatic stumble. Like this time, last May's Xi-Kim Dalian meeting came when the U.S. was conducting trade talks with China. Negotiations were held in Washington on May 17-18, 10 days after the Dalian meeting, and were attended by Chinese Vice Premier Liu He, a close aide to Xi. The U.S. and China were supposed to have reached a cease-fire in their trade war.

But the agreement was short-lived. Trump soon tore up the agreement and opted to impose tariffs instead as a tool to gain leverage against China.

Until just two years ago, North Korea acted as a kind of glue that bonded the U.S. and China, as they jointly responded to North Korea's repeated nuclear tests. Since then, the situation has changed drastically.

U.S.-North Korean relations and Sino-North Korea relations are intertwined, regardless of how much Beijing tries to dismiss the connection.

During the fourth summit between Xi and Kim earlier this month, for instance, there was a "confidential" element of the leaders' meeting reported only by the North Korean side.

The North's official Korean Central News Agency quoted Xi as telling Kim: "The matters of principle maintained by the DPRK side are natural demands," referring to North Korea by its official name, the Democratic People's Republic of Korea. Xi said he "fully agrees that its reasonable points of concern should necessarily be resolved and it is a correct choice for the parties concerned to prioritize and reasonably tackle them."

KCNA then quoted Xi as saying that China would remain "the reliable rear and staunch comrades and friends of the Korean comrades," in the future as in the past. These remarks by Xi were not reported by the Chinese side.

If the North Korean media report is accurate, China's stance will naturally provoke the U.S. as it did last year. Trump has flaunted his personal ties with Xi, saying they have an "incredible relationship," but behind the scenes it is a different story. 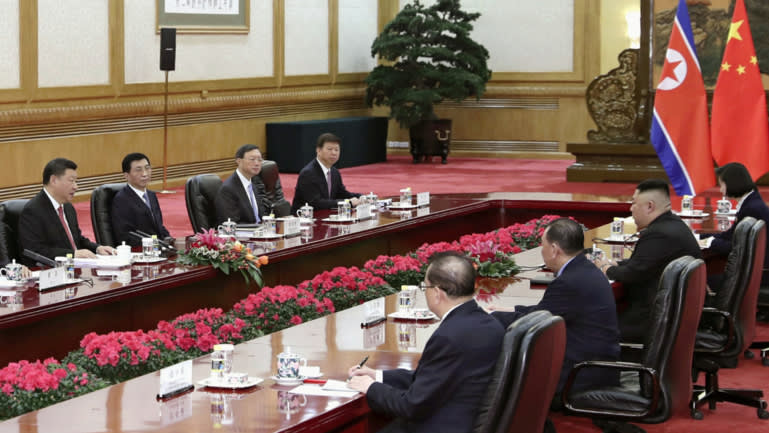 Xi and Kim meet at the Great Hall of the People in Beijing on Jan. 8. North Korean media reported that Xi promised to "back" Pyongyang, but Chinese state media did not mention the comment. (Xinhua/Kyodo)

A quick look at the itineraries of Kim and the U.S. trade delegation suggests that the two coinciding high-profile events in Beijing were carefully scripted.

1) Two days of vice-ministerial-level trade talks begin at the Ministry of Commerce in Beijing between the U.S. and China. Chinese Vice Premier Liu He makes a surprise appearance.

2) Kim Jong Un arrives by train in Dandong to commence his fourth summit with Xi. An announcement about his visit is made the next morning.

2) Fourth summit begins between Xi and Kim, who was celebrating his birthday. Evening reception.

1) The U.S.-China trade talks are extended by a day and discussions continue.

2) Xi and Kim hold the second day of their summit at the Beijing Hotel, diagonally across the road from the Ministry of Commerce. Kim leaves for Pyongyang in the afternoon by train.

3) Meeting between Premier Li Keqiang and Tesla's Musk in Zhongnanhai, a former imperial enclave in Beijing, with the economy and foreign ministers.

1) Kim returns to North Korea through the border at Dangdong in the early morning.

2) The results of the Xi-Kim summit and the trade negotiations with the U.S. are officially published in China.

3) Vice President Wang Qishan addresses a gala in Beijing commemorating 40 years of diplomatic relations between China and the U.S.

China's aim was to manage potentially dangerous U.S. -China relations in such a way that that they would not go off track. The pawns for that were Kim Jong Un and Elon Musk. The Tesla CEO visited Shanghai in concert with the U.S. delegation's trip to China. After breaking ground for his factory, Musk headed to Beijing to meet with Premier Li. By Li's side were many ministers in charge of the economy and trade -- a VIP reception, in other words.

A similar scene occurred last summer. Beijing invited Musk to China as the trade war intensified. The decision to build a factory in Shanghai was made, after which he traveled to Zhongnanhai to meet with political heavyweight Wang Qishan. Can China learn from last year's unfortunate breakdown of Sino-American relations to turn around the tables this year?

This New Year's Day was an important one for China and the U.S., marking 40 years of diplomatic relations between them. The U.S., however, was only represented by Ambassador Terry Branstad at a reception celebrating the occasion -- a comforting situation for North Korea. The less aligned Beijing and Washington are, the easier it is for Pyongyang to sniff out an opening. Xi must manage Sino-American ties in a way to avoid being wrapped around Kim's little finger.

North Korea will make an effort for a second summit with the U.S. "to achieve results that will be welcomed by the international community," Kim was quoted as saying by China's official Xinhua News Agency, while passing over reports that Xi accepted an invitation to visit Pyongyang -- an omission likely meant to placate the U.S. Whether Trump will view it that way, however, is unclear.

It is difficult to predict how the situation will unfold. Will Kim borrow a Chinese airplane to meet Trump as he did for their summit in Singapore? If he goes, how will the power struggle between China and the U.S. play out? What is certain, though, is that the conflicting interests of the U.S. and China in North Korea are likely to have a major impact on the world stage again this year.