China again moves to quash a rebellion, 31 years after Tiananmen

TOKYO -- Hong Kong citizens are forming lines at international courier services, a friend in the territory explained in a recent email.

They are not going to the post office, which has struggled to deliver mail overseas due to massive flight reductions caused by the novel coronavirus.

Instead, they are urgently heading to the counters of DHL and other parcel delivery companies that possess their own fleets of planes to send documents to the U.K. to renew or extend their British National (Overseas) passports.

Any delay could be costly as they feel the walls closing in on them after China's National People's Congress, its parliament, on May 28 kick-started a process to introduce a national security law for Hong Kong.

BNO passports were introduced to Hong Kong residents ahead of the return of sovereignty over Hong Kong from Britain to China in 1997. While not granting the right to reside in the U.K., they do offer stays of up to six months without a visa. Holders are also eligible for U.K. consular assistance when traveling abroad. People line up outside a DHL Express office in Hong Kong on June 1. Throngs of people lined up at DHL courier outlets across the city, many to send documents to the U.K. to apply for or renew what is known as a British National (Overseas) passport. (Source photos by AP)

Raab indicated that he would extend BNO visa-free stays to 12 months, make it easier to work or study in the U.K. and provide a path to British citizenship later on.

For the young people waiting at DHL and FedEx counters, the BNO is a ticket to freedom, an insurance policy against the worst-case scenario: a repetition of June 4, 1989.

Thirty-one years ago to this day, tanks of the People's Liberation Army rolled in to Beijing's Tiananmen Square to crack down on student demonstrations.

Such is the fear brought about by the NPC's move on the national security law.

The high-handed action paves the way for China to eventually post mainland security and intelligence organs in the territory on top of the already present PLA contingent -- increasing anxiety that the "one country, two systems" formula that has been in place for the past 23 years -- and which Deng Xiaoping promised would last for 50 years -- could end.

Except for foreign and defense affairs, Hong Kong has enjoyed a high degree of autonomy from Beijing since the July 1, 1997, handover.

The friend's email also said that there has been another move representing the impending exodus from Hong Kong: migration to Taiwan. Taiwanese President Tsai Ing-wen, center, speaks while visiting Lam Wing-kee, right, a bookseller from Hong Kong who in 2015 was detained in China on accusations of bringing banned books into the mainland, at Causeway Bay Books' store in Taipei on May 28.   © Taiwan Presidential office/AFP/Jiji

"Our son has begun to think about moving to Taiwan, seriously," the friend wrote, though added, with some apprehension: "As parents, we want to stop him in some way."

Taiwanese President Tsai Ing-wen has set up a task force to accept Hong Kong citizens who migrate from the former British colony for political reasons.

The idea of upping stakes and moving to Taiwan gained prominence through a major incident that took place five years ago.

Five people related to the Hong Kong bookstore Causeway Bay Books, known for publishing and selling works critical of the Chinese government, disappeared one after another in 2015. They were found later to have been detained in mainland  China.

One of them disappeared in Hong Kong after telling others that he would go to a warehouse. Another went missing in Pattaya, a resort city in Thailand.

One of the booksellers, Lin Rongji, migrated to Taiwan and reopened the bookstore in the capital, Taipei. Now, young people in Hong Kong are thinking of following him.

Back in 1989, shortly before the Tiananmen crackdown, Hong Kong saw a demonstration attended by more than 1 million people supporting the democracy movement in China.

One Hong Kong man who participated in the demonstration looked back on that time and said he had felt compelled to join. He said he thought that as Hong Kong was to be returned to China just eight years later, "the outcome of the pro-democracy movement in Beijing will also affect our future."

Demonstrations commemorating June 4 have continued in Hong Kong. But with the passage of time, the focus has shifted to protecting Hong Kong's rights rather than calling for China's democratization.

Last summer, Hong Kong saw a wave of massive protests attended by 1 million to 2 million people to protest a controversial extradition bill that would have allowed criminal suspects to be handed over to mainland China.

The bill was eventually withdrawn. But with the security law, even the right to assemble and hold demonstrations -- the very symbol of the Hong Kong political movement -- is now under threat.

This year, for the first time since the gathering began 30 years ago, local police have banned the June 4 annual public remembrance, citing coronavirus fears. Activists, however, see that as nothing more than an arbitrary excuse meant to stop the event. 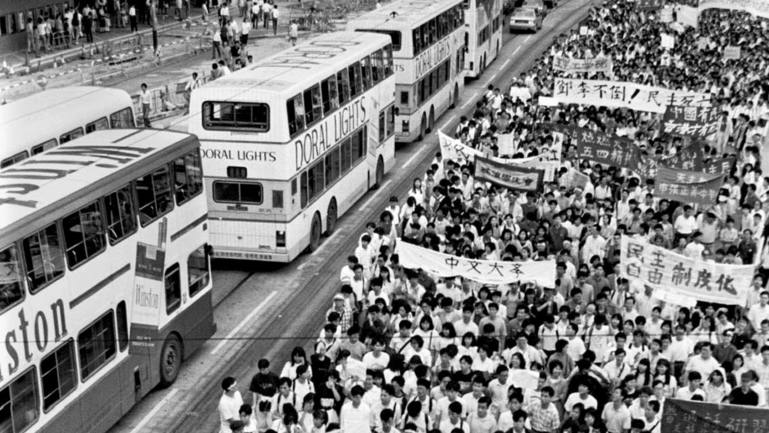 People march through the Central financial district of Hong Kong during a demonstration on May 21, 1989, in support of ongoing pro-democracy protests in Beijing.   © Reuters

One can see clear parallels when comparing the Tiananmen Square crackdown and the introduction of the Hong Kong national security law.

Both were iron-fist measures for quashing threats to Communist Party rule.

After the tanks and soldiers cleared the protesters in Beijing, China was hit hard by Western economic sanctions imposed by the U.S. and its allies.

And today, if the U.S. carries out its threat to end preferential treatment for Hong Kong, there will be a significant impact. In another blow to China, the U.K. is siding with the U.S. on the Hong Kong issue, in stark contrast to the conspicuously "pro-China" stance it took when leaving the European Union earlier this year.

The U.S., the U.K., Australia and Canada issued a joint statement on May 28 expressing deep concern about China's decision to introduce the security law.

When China was reeling under Western economic sanctions after Tiananmen, British-ruled Hong Kong functioned as its gateway. Then-paramount leader Deng was a pragmatist.

A hard-liner on security, he, of course, is ultimately responsible for the Tiananmen crackdown. But he also was the one who had declared that Hong Kong would stay autonomous under "one country, two systems" until 2047.

Deng died shortly before Hong Kong's return to Chinese rule, though he had overseen the 1984 agreement with the U.K. that made it possible.

After the handover, Hong Kong's importance remained unchanged. The territory's vitality as a commercial and finance center, coupled with China's accession to the World Trade Organization at the end of 2001, significantly boosted China's rapid growth.

A major shift, however, occurred after Xi Jinping became China's president in the spring of 2013.

In 2014, student-led pro-democracy protests dubbed the "Umbrella Movement" swept Hong Kong. This was followed by the Causeway Bay Books incident, and then later by the massive demonstrations over the extradition bill. The uproar over the new national security law is the latest development.

The Umbrella Movement brought Hong Kong to a standstill. Many angry citizens and students calling for "true universal suffrage" -- in connection with an election to choose Hong Kong's top official -- occupied major streets and other places for 79 days.

The common thread linking all of the events is Xi's bullish attitude underpinned by a willingness to amend Deng's policy of keeping Hong Kong autonomous for 50 years.

The 1984 Sino-British Joint Declaration guarantees post-return freedom of speech and assembly in Hong Kong. But in 2017, under Xi's rule, the Chinese Foreign Ministry made clear that the joint declaration "no longer has any realistic meaning," two decades after the return.

Just as Xi brought forward China's target date for catching up with and overtaking the U.S. economically by about 15 years, to 2035, the president also seems to have an equally aggressive attitude toward ending the 50-year pledge over Hong Kong.

An announcement reflecting just such thinking came on June 1.

Xi suddenly ordered a 15-year plan to turn the whole of Hainan Island in southern China, well known as a resort island and sometimes referred to as China's Hawaii, into a free trade port with international influence.

Hainan is located southwest of Hong Kong and is about the size of Kyushu, one of Japan's four main islands. It is also a strategic military foothold facing the South China Sea, where Beijing is engaged in maritime disputes with several countries including Vietnam and the Philippines.

Xi declared that China will lay the groundwork for Hainan's transformation over the next five years and make it a new model for its open economy by 2035. Although the ultimate target date is the middle of the 21st century, the long-term development plan puts emphasis on the first 15 years.

Xi clearly aims to create a substitute for the functions of troubled Hong Kong.

Once again, the year is 2035, already marked as the year to achieve the key goal of Xi's new era.

And it is also a coded message: All roads lead to 2035, which is the year until which many Communist Party watchers believe Xi intends to remain as China's leader.