China's famed face-changing performers may offer guidance to diplomats adjusting to an ever-changing world. This actor demonstrated the ancient art during a Sichuan Opera show.   © Reuters
China up close

China and Japan inch closer for insurance against Hurricane Trump

TOKYO -- Winter is over for the Sino-Japanese relationship, as ties warm by the day.

Earlier this week, Chinese State Councilor and Foreign Minister Wang Yi greeted his Japanese counterpart, Taro Kono, in Beijing with a broad smile, something he had not previously flashed to Japanese officials. China had maintained a hard line on Japan since September 2012, when a wave of anti-Japanese demonstrations swept the country.

Beside Wang was "Japan hand" Kong Xuanyou, the vice foreign minister soon to arrive in Tokyo to serve as ambassador.

The rapid rapprochement is not so much a result of neighbors pursuing deeper ties but more of an insurance policy against the storm ahead, a storm otherwise known as U.S. President Donald Trump.

In an unusual flurry of diplomacy, influential Japanese figures have been visiting China one after another.

Besides Kono's official visit, he and five other Japanese cabinet ministers -- including Hiroshige Seko, minister of economy, trade and industry -- attended the fifth Japan-China High-Level Economic Dialogue in Beijing.

Later this month, Hiroshi Yamamura, the head of the Maritime Self-Defense Force, will visit China for an international fleet review in the eastern city of Qingdao, and Toshihiro Nikai, the ruling Liberal Democratic Party's secretary-general, will attend the second Belt and Road Forum for International Cooperation in Beijing.

It is rare for so many government, LDP and Self-Defense Force officials to travel to China in such a short period of time. Japanese Foreign Minister Taro Kono was treated to a friendly atmosphere by Chinese Premier Li Keqiang at the Zhongnanhai leadership compound in Beijing on April 15.    © Reuters

But despite the friendly atmosphere, the high-level dialogue stood out for a lack of notable agreements.

"The atmosphere was extremely positive," a source familiar with Sino-Japanese ties said. "But the dialogue was unusual in that it lacked substance and produced few results."

The strange bedfellows did agree that the ship must go forward. So they now row in unison without seeming to look at each other. As they do, they are fretting over another partner, the U.S.

The uneasy warming of Sino-Japanese relations, therefore, is each other's insurance policy, a hedge against the uncertain nature of their trade relations with America.

When it comes to relations with the U.S., Chinese President Xi Jinping faces a higher premium than does Japan. The charm offensive toward Japan is part of this.

The Chinese leader is keen to finalize a trade deal with President Trump, at a face-to-face meeting. But Xi cannot fully read the unpredictable U.S. president.

The Sino-American struggle is casting other dark clouds. The U.S. Commerce Department this month added 50 companies and entities to its "unverified list," of which 70% were Chinese companies and universities.

American manufacturers now have to exercise extra caution to ensure their exports do not land at these unverified parties. American semiconductor production equipment maker Applied Materials has since stopped doing business with the Chinese entities added to the red flag list.

This could disrupt supply chains and deliver a serious blow to China. It is unclear how the countries' trade talks can be brought to a successful conclusion in this environment.

As a result, China is stepping up its overtures to its neighbors, who might be able to provide a diplomatic cushion if the trade stalemate with the U.S. extends too far into the future.

Meanwhile, Japan will roll out the red carpet for Trump at the end of May. The U.S. president will be the first state guest for Japan's new emperor, who ascends to the Chrysanthemum Throne at the beginning of May.

While the risks evolving out of Japan-U.S. relations are much lower than those between the U.S. and China, they do necessitate a small insurance policy.

Were Japan to bear the brunt of the Trump administration's protectionist policies in future negotiations, it would like to think China's hefty markets could soften the blow. To prepare for such a scenario, Tokyo needs to persuade Beijing to improve the business conditions for Japanese companies operating there.

As for diplomatic concessions, China has agreed in principle that Xi will visit Japan at the end of June to attend the Group of 20 leaders summit in Osaka. It will be Xi's first Japan visit since he became top leader in 2012.

By all means, Xi would want to be in Osaka, considering that Trump will be making two visits to Japan, in May and June.

Xi knows how to use the G-20 stage, and Japanese diplomats have bitter memories from when Prime Minister Shinzo Abe attended the 2016 G-20 summit in Hangzhou, China. When Xi and other foreign leaders, including South Korea's then President Park Geun-hye, held separate talks, they shook hands in lavishly furnished rooms with their national flags behind them. 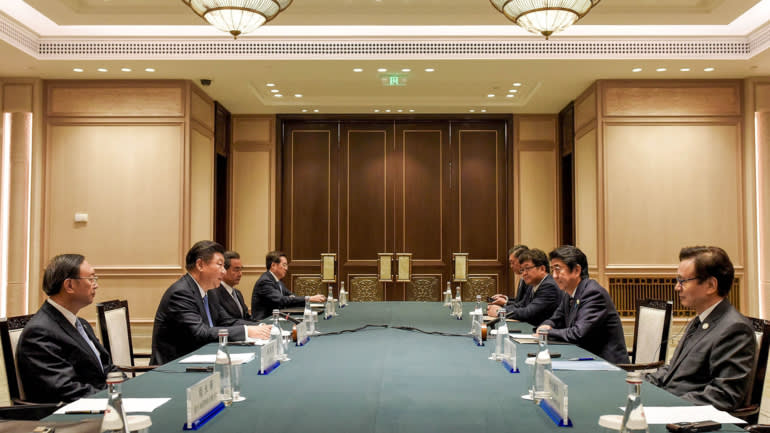 When China hosted the G-20 leaders' summit in 2016, President Xi Jinping used the occasion to snub Japanese Prime Minister Shinzo Abe by meeting with him in a Spartan conference room.   © Reuters

But when Xi and Abe shook hands, national flags were missing. And the talks were held in a small, bland room.

Xi can be counted on to visit Japan for the G-20 summit in Osaka. But the trip will not be categorized as an official bilateral visit, nor will Xi be treated as a state guest. He will be received like all other G-20 leaders, Kono made clear during his recent China visit.

Still, it will be a much warmer welcome than the treatment Abe received in China three years ago. And in this sense, China's basic commitment to Xi attending the G-20 summit in Osaka is a painless concession.

Xi is also to make an "official" Japan visit this year, but that has been delayed until autumn or later. If it comes off in 2019, it would be an unusual second visit to Japan in one year. It could also provide a stage for Xi to make further concessions to Japan. But that premium payment would depend on how much U.S. risk China is carrying.

China puts the greatest emphasis on its top leader saving face. But it can also be pragmatic when needed, attaching importance to actual benefits.

In the traditional Chinese art of face changing, or mask changing, master performers alter their appearance at the blink of an eye. In 1972, China changed its diplomatic face, normalizing ties with an old enemy, the U.S. At lightning speed, it also established diplomatic ties with Japan that year.

China was able to make these significant decisions despite being mired in the 1966-1976 Cultural Revolution. This quick decision-making ability is one reason China still exists as a socialist state.

China's flexibility can also be seen in its pursuit of contradictory policies of coexisting with capitalist and free nations on the global stage while pursuing a "socialist market economy" at home.

Can China manage to act with such pragmatism as it navigates the rough storm?

At the high-level dialogue, China and Japan squared off over 5G wireless technology. China pressed hard for Japan not to exclude Huawei Technologies from its networks. Tokyo, unsure if it wants a Chinese company handling its huge data flows, was on the defensive, explaining that it is not targeting any specific company. The explanation fell flat with China.

Other thorny security issues between Beijing and Tokyo include China's gas field development in the East China Sea and a flap over the Senkaku Islands in the same body of water. China's militarization of the South China Sea also stands between the nations.

But Japan and China are neighbors, and building confidence is crucial. Perhaps this is why Japan's Defense Ministry is sending the MSDF destroyer Suzutsuki to Qingdao for the fleet review. It will be the first time for an MSDF vessel to visit China in over seven years.