The coronavirus pandemic has upped the stakes in the game of global chess between Donald Trump and Xi Jinping. (Nikkei Montage/ Source photos by AP and Reuters)
China up close

TOKYO -- British diplomat Henry Wotton famously said in 1604 that "an ambassador is an honest gentleman sent to lie abroad for the good of his country."

What then, are we to believe of the two mixed signals coming from prominent Chinese diplomats in recent days?

It began with a tweet by newly appointed foreign ministry spokesman Zhao Lijian. "It might be US army who brought the epidemic to Wuhan," he wrote on March 12. "Be transparent! Make public your data! US owe us an explanation!"

It was a dangerous tweet that added fuel to the confrontation between the U.S. and China.

The military conspiracy drew an immediate backlash from Washington, annoying U.S. President Donald Trump so much that since then he has intentionally referred to the coronavirus as the "Chinese virus."

Why would a foreign ministry spokesman choose such undiplomatic words in a tweet? Naturally, the controversial tweet would have been sanctioned by the top brass of the Chinese diplomatic corps, namely Politburo member Yang Jiechi and Foreign Minister Wang Yi.

"China was initially on the back foot as the coronavirus began to spread, so it launched a preemptive strike on the U.S.," a Chinese source familiar with Beijing's politics and bureaucracy said. "The real audience for this U.S. military conspiracy theory was inside China."

By "back foot," the source was referring to the early days of the virus, when the pathogen began spreading from China to Europe. Claiming numerous lives globally, SARS-CoV-2 is now throwing the world economy into recession.

Beijing feared that the Trump administration would hold China responsible for the development, claiming that the Chinese leadership initially held back crucial virus-related information. China also dreaded that Washington might even demand an apology to the world.

If China had taken a passive stance, its image in the international community would be tarnished. The Chinese Communist Party's authority at home would also be rattled. Therefore, it needed some tool to launch a preemptive attack to prevent the criticism leading to President Xi Jinping.

Propaganda has always been critically important for the party, and that is why its Publicity Department wields such enormous authority.

The propaganda strategy this time was to launch the argument that "the origin of the coronavirus is not in China."

If such a view were accepted internationally, China would largely be let off the hook, despite having failed in its initial response to the outbreak. It will also become difficult for the Chinese public, especially disgruntled Wuhan citizens, to condemn the government.

Xi himself has issued an order to thoroughly investigate "where" the virus came from and how it spread. He raised those questions in an article he contributed to the March 16 edition of the party magazine Quishi.

Pinpointing the specific origin of a virus is unrealistic to begin with. Any efforts to do so inevitably create room for political consideration to sneak in.

Relevant Chinese divisions are believed to be pulling out all the stops to study and write papers about various theories of where the virus came from.

Saying that the coronavirus originated outside of China fits comfortably with the narrative that China wants, and leads to the U.S. military conspiracy theory spread by firebrand Chinese Foreign Ministry spokesman Zhao.

The unfounded theory claims that the virus was brought into Wuhan by athletes from the U.S. armed forces who were in Wuhan for the Military World Games in October 2019.

Around 300 American athletes took part in the games.

But the controversy over the conspiracy theory took a new twist this week. Cui Tiankai, China's ambassador to the U.S., made a rare TV appearance to iterate that conspiracy theories about American armed forces planting the coronavirus in Wuhan are "crazy." (Screenshot from Axios on HBO)

Cui Tiankai, the Chinese ambassador to the U.S. with strong connections to Xi, gave an interview to Axios in which he reaffirmed his belief that such military conspiracy theories were "crazy."

He had said so in February in a separate interview, before Zhao's tweet.

Asked whether he, the ambassador, or Zhao, the foreign ministry spokesman, represented the official stance of China, Cui said, "I'm here representing my head of the state and my government. ... I am the representative of China in the United States."

Cui also said that it is "very harmful" for journalists and diplomats to "speculate about" the origins of the coronavirus, and that it should be left to scientists.

When asked by the interviewer whether Zhao had any evidence of the U.S. military bringing the virus to Wuhan, Cui replied: "Maybe you could go and ask him." Cui was speaking as if he were giving Zhao the brushoff.

Furthermore, the transcript of the interview was published on the websites of the Chinese Foreign Ministry and the Chinese embassy in the U.S.

The two officials from the Chinese Foreign Ministry saying different things -- one using strong language and the other soft language -- look to be part of Beijing's two-track diplomacy in navigating the coronavirus blame game with the U.S.

With Cui saying definitively that he was representing Xi, the Chinese head of state, it is a good guess that Cui received an order straight from the top to show China's goodwill to the Trump administration and the American people.

In an Asian chess analogy, controversial spokesman Zhao is nothing more than a low-ranking lance that can only move forward and is disposable.

On the other hand, if a lance is kept, it may be useful in the future. If U.S.-China relations further deteriorate, Zhao can again stand at the forefront of the bilateral confrontation.

While China's double-tongued diplomacy is hard to comprehend for the international community, it does not mean that Chinese policy-making has fallen into chaos. According to Chinese logic, it means the opposite.

The Chinese leadership, led by Xi, thinks that a golden opportunity is now coming in the country's battle for international influence.

A turning point came in mid-March, when the number of people infected with the coronavirus outside China exceeded the number of cases inside the country.

In addition to this reversal, the number of infected people in the U.S. has exploded past 45,000, while U.S. stock markets plunged before this week's reversal.

There is now a possibility that the U.S. over the next year will suffer more from the pandemic than China.

Even if Chinese economic growth slows sharply to less than 5%, the country will see its global influence rise if the U.S. suffers, say, negative growth.

The pandemic is offering China a golden opportunity to quickly turn the tables on the U.S. China has been on its back foot since its trade war with the U.S. erupted. Now the virus, through the economic mayhem it has triggered, is threatening to cast a cloud over Trump's bid for a second term.

Since China is feeling more comfortable, it has temporarily shelved the U.S. military conspiracy theory.

Now that the peak of the coronavirus looks to have passed in China, the next key step is to make sure anti-China sentiment does not rise in Europe, which has seen a tragic number of deaths. 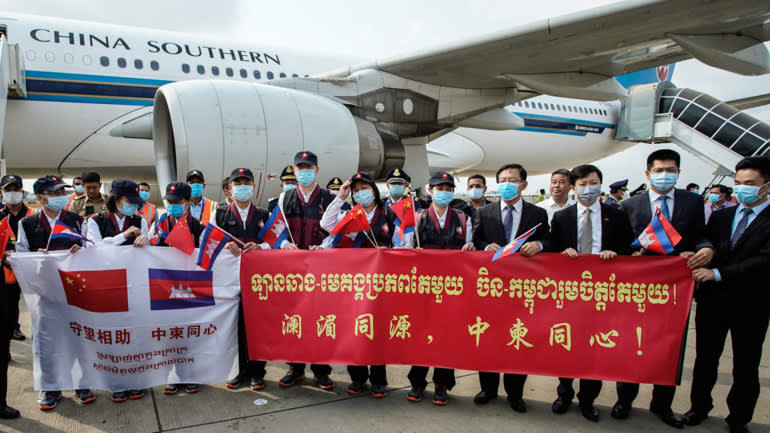 Chinese doctors arrive in Cambodia to help fight the coronavirus crisis on March 23.

Meanwhile, Trump is also not sitting by idly.

Trump sent letters to North Korea and Iran offering support for anti-virus measures, showing that the U.S. is fighting for influence by reaching out to countries belonging to the opposite camp. Iran reportedly rejected a U.S. offer of medical aid.

The global public health crisis is drastically altering global politics and economics, and is showing that it can also alter the future. It has already forced the postponement of the Tokyo Olympics to 2021.

Just as nobody could have predicted the world's pitiable current state back on Jan. 23, when Wuhan was put on lockdown, no one can now say what kind of global pecking order might emerge once the virus has been vanquished.

What is certain is what has been certain for years now: The bruising tug-of-war between the U.S. and China over "a new post-virus order" will continue.