Yu the Great became a legendary ruler in China for his introduction of flood control. Will President Xi Jinping be credited for harnessing the floods of 2020? (Nikkei Montage/Source photos by AP and Getty Images)
China up close

President shows who's boss, while premier is sidelined in the mud

TOKYO -- Despite serious flood damage in various parts of China, President Xi Jinping had not visited any of the impacted areas.

But on Aug. 18, Xi suddenly appeared in flood-hit Anhui Province for an inspection, one that seems to have followed the conclusion of the annual summer gathering of Chinese Communist Party leaders and elders, the Beidaihe meeting.

"He must have been warned by elders about the special meaning of flood control in Chinese politics," one party source said.

"The foolish old man removes the mountains, and 'Yu the Great' controlled the waters," Xi said, according to a Xinhua News Agency roundup of the four-day visit.

"The Chinese nation has fought against natural disasters for thousands of years and accumulated valuable experience. We should continue to fight," he said, not by fighting against God, but by respecting nature and complying with natural laws.

By referring to Yu the Great, a legendary emperor in ancient China who put in place irrigation canals that channeled water to fields, Xi highlighted China's several-thousand-year history of fighting natural disasters. 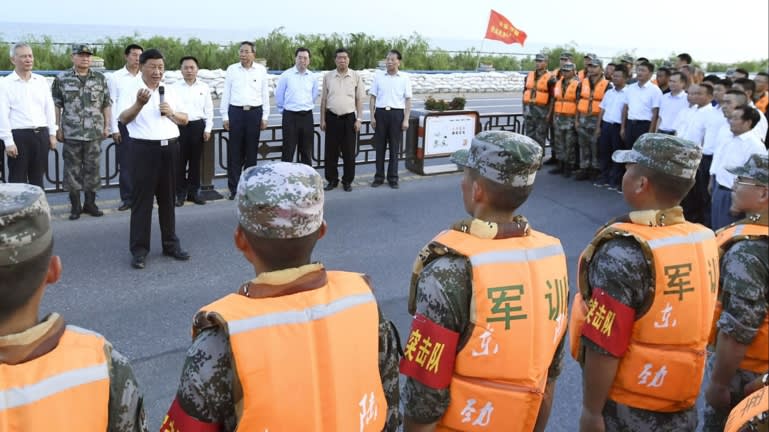 It is true that flood control has been particularly significant in China. Bringing raging rivers under control was so difficult that people who had the ability to harness the waters were fit to become kings or emperors.

Failure to control floods meant farmers would suffer and be driven to their deaths.

As China's "core" leader, that responsibility today falls on Xi.

Furthermore, this year is the Year of Geng Zi, or Metal Rat, which comes once every 60 years and is said to always bring with it a big history-shaking incident, which the superstitious Chinese take seriously.

Already, the country has been hit hard by the coronavirus. True to Metal-Rat year form, the outbreak has not been the only calamity. Floods are also causing damage even greater than the floods of 1998.

Back then, President Jiang Zemin postponed an official visit to Japan to see to relief efforts in the Yangtze River basin and the northeastern part of the country.

It is not hard to imagine that Jiang had a word or two to say about flood control at the Beidaihe meeting. Then President Jiang Zemin in Wuhan, Hubei Province, oversees the response to what in the summer of 1998 was China's worst flooding in 44 years, when storms took more than 2,000 lives and left millions homeless.   © AP/Kyodo

In fact, many of the party elders are specialists on the topic.

Wen Jiabao, who served as Chinese premier in the Hu administration, is a geology expert.

While in Anhui, Xi also referenced a foolish old man who tried to remove mountains, arming himself with the political connotations of a Chinese fable of an elderly man who lived in northern China. Bothered by two mountains that stood in front of his doorway, blocking the view and the path, the man, with the help of his sons, began digging through them with hoes and baskets.

When questioned by another man why he was undertaking such a foolish task, the old man replied that when he dies his sons will carry on, as will his grandsons and then their sons and grandsons, and so on to infinity, ultimately removing the peaks.

Impressed by his conviction, God sent down two angels who carried the mountains away on their backs, the tale goes.

Mao Zedong, communist China's founding father, was fond of citing this story. When he visited the Soviet Union, Mao told it to Josef Stalin, to counter the tale of the Gigantic Turnip, a Russian folk tale the host had mentioned in preaching the importance of cooperation between the two countries. Russia's President Vladimir Putin shakes hands with his Chinese counterpart Xi Jinping at the Kremlin in March 2013. Former Chinese leader Mao Zedong told Josef Stalin the tale of the foolish old man during a visit to the Soviet Union.   © Reuters

During the same tour, Xi inspected the floodgates of the Wangjiaba Dam on the Huai River.

In 1950, shortly after the People's Republic of China was founded in October 1949, the Huai River, which flows through Anhui, was hit by severe flooding. Mao issued an order to control the floods at any cost. The floodgates Xi visited were quickly constructed on Mao's instructions.

Once again, Xi was overlapping himself with Mao, perhaps in preparation for a difficult political situation ahead.

Chinese state media played along, publishing a photograph of Xi swaggering and strutting with a smile in front of a wall with Mao's calligraphy inscribed on it.

While Xi was in the spotlight, Premier Li Keqiang was visiting another flood-hit area, one about 1,000 km away, but was mostly ignored.

It is quite unusual for China's top two leaders to be away from Beijing at the same time on inspection tours.

On Aug. 20, two days after Xi arrived in Anhui, Li inspected a flood-affected area of Chongqing as the metropolis was still in the throes of the disaster. It is hard to argue that Premier Li Keqiang has not been sidelined.   © Chinese government Weibo/Kyodo

But not this time. Perhaps this is because many Chinese people were not told of the trip.

Li's Chongqing visit was initially reported only by www.gov.cn, the website affiliated with the State Council, the Chinese government headed by him.

Furthermore, the major Chinese media outlets treated Li's inspection tour as the fourth most important news item of the day, at best.

The reports did not mention when Li visited Chongqing. If they had, questions would have been raised about why the coverage ran so belatedly.

Chongqing news outlets also reported the trip after a delay, despite the fact that Chen Min'er, the city's party secretary and a close aide to Xi, accompanied Li on his inspection tour.

The downplaying of Li's trip was likely an attempt to play up the Anhui visit made by Xi, China's unrivaled "core" leader.

Li has also been sidelined in discussions about a future long-term economic plan.

On Monday, an important meeting chaired by Xi was held at Beijing's Zhongnanghai, home to party and government headquarters. Xi listened to economic experts' opinions on a new five-year plan that starts next year.

Among the meeting participants were China's No. 5 Wang Huning and No. 7 Han Zheng, both Politburo Standing Committee members, as well as Vice Premier Liu He and party publicity chief Huang Kunming.

Li, whose primary job is economic management, was not present.

By rule, Li is set to remain a member of the party's top decision-making body at least until the autumn of 2022 and premier until the spring of 2023.

Nevertheless, China's No. 2 is not presiding over discussions about the 2021-2025 plan. It is hard to argue he has not been sidelined.

Chinese politics under Xi's rule is always harsh. His faction controls key positions in party publicity, which is likely what led to the media's extremely unequal treatment of the flood inspection tours.

In addition to the next five-year plan, an ultra-long-term economic outlook for 2035 will also be discussed at the fifth plenary session of the party's 19th Central Committee, in October.

Xi stressed at the meeting on Monday the importance of adopting "a long-term perspective," of grasping the direction of the times and extensively pooling wisdom to study new circumstances and make new plans.

In effect, he has been showing the Chinese people who's boss and telling them his reign is set to last into the foreseeable future.