TOKYO -- Across China, big signboards are being raised to promote one of President Xi Jinping's recent favorite political slogans. It calls for mankind to build a "community with a shared future."

Proudly displayed behind the words is a photo of the Greek port of Piraeus, near Athens, and the many Chinese ships calling there. Piraeus was acquired and is operated by state-owned China Ocean Shipping (Group) Company, or Cosco.

Greece's busiest cargo port and largest container port, Piraeus had been the front line of China's drive for building a community with a shared destiny.

Now that front line is advancing to Trieste, the northern Italian port city facing the Adriatic Sea. China seeks to help rejuvenate the port under its Belt and Road Initiative, with Chinese state-owned companies investing in port terminals and a surrounding rail network.

The Cold War made Trieste infamous. In 1946, former British Prime Minister Winston Churchill referred to the port city in his "Iron Curtain" speech.

"From Stettin in the Baltic to Trieste in the Adriatic, an Iron Curtain has descended across the (European) continent," Churchill declared in Fulton, Missouri. Strategically located at the end of a narrow strip between Italy and the Balkan states, and close to Germany's industrial powerhouse of Bavaria, the port has had a tumultuous history. After World War II, it became the Free Territory of Trieste under the protection of the United Nations. Later, the troops of Josip Broz Tito, leader of the Socialist Federal Republic of Yugoslavia, invaded the Allies-governed part of Trieste.

With a foothold in Trieste, China's influence in the Adriatic Sea could expand significantly, agitating the U.S.

On the other end of Churchill's Iron Curtain, Stettin in Poland, the U.S. and China are engaged in a different battle, this one over Chinese telecommunications equipment maker Huawei Technologies.

In January, Polish authorities arrested a Chinese employee of Huawei on suspicion of spying. The Polish government is also considering excluding Huawei from its next generation wireless network, prompting a statement from Huawei criticizing Poland's top officials for "bending over backward to accommodate Washington's interventionist agenda."

The battle for hegemony at the southern and northern edges of the Iron Curtain is symbolic of the times. In China's "win" column are Central Asian and Eastern European countries, the three Baltic nations and countries that made up the former Yugoslavia. All have jumped aboard the Belt and Road.

The Berlin Wall, a symbol of the Cold War, crumbled 30 years ago, leading to a period of unrivaled power for the U.S. Now China has emerged as a new rival, equipped with economic power that challenges the U.S., a weapon the Soviet Union never really had. 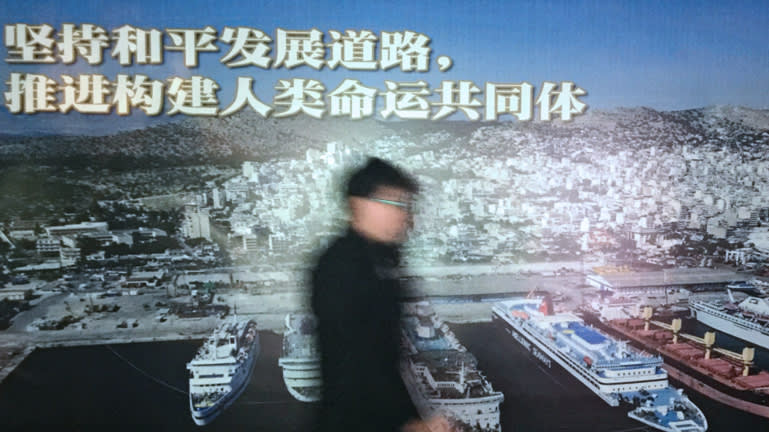 A poster promoting Xi's slogan of building a "community with a shared future for mankind" is seen with a picture of the Greek port of Piraeus in the background. (Photo by Katsuji Nakazawa)

President Xi on March 21 began a six-day tour of three European countries -- Italy, France and Monaco -- and repeatedly trumpeted his "community with a shared future for humanity" slogan.

The idea of building a community with a common destiny is the centerpiece strategy of Xi's "new era" and reflects the ultimate goal of the Belt and Road Initiative. It has been written into the Chinese Communist Party's constitution and the preamble of China's national constitution.

But the idea of sharing a common destiny with communist China is uncomfortable to European countries, which advocate freedom and democracy, values not shared with Communist China.

Through Greece, Portugal and Italy, China has been making inroads into Europe, gaining access via the continent's soft underbelly: the economically troubled southern states.

When Cosco acquired the rights to Piraeus port, it was initially seen as made possible by the Greek debt crisis and the dire economic state Greece was in. But with the Belt and Road reaching Italy, a Group of Seven nation, China's arrival is seen as no coincidence.

The European Union recently shifted its China policy, describing the country as a "systemic rival." The timing coincided with Xi's tour. Although China had thought Xi's visit would highlight China's partnership with Europe, major EU countries responded in a different way. 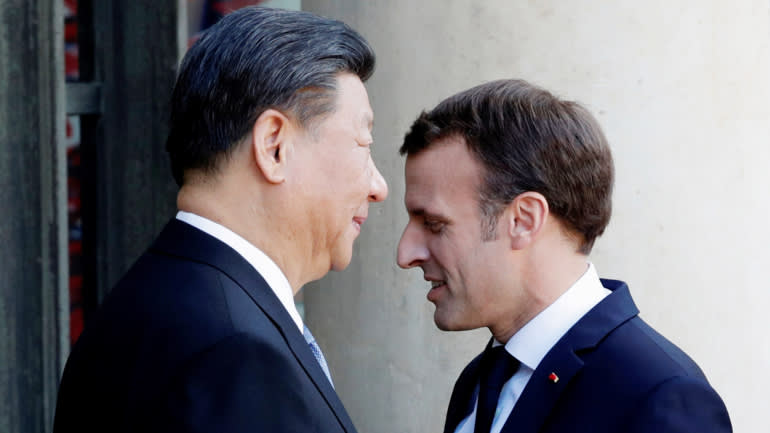 During his meeting with Xi in Paris on March 25, French President Emmanuel Macron, apparently with Italy in mind, made remarks indirectly warning China about driving wedges into the EU one country at a time.

Before going into his talks with Xi, Macron referred to a shift in EU policy toward China. "The period of European naivete is over," he said. German Chancellor Angela Merkel has also made it clear that while China is a partner, it is also a competitor with a different political system.

There is a strong perception within the EU that China's market opening is insufficient and that China's trade and other systems that allow it to benefit unilaterally are unfair. Despite the headwinds, Xi succeeded in signing a memorandum of understanding with Italy regarding the Belt and Road, the first such agreement with a G-7 nation. The coup will give a boost to the second Belt and Road Forum for International Cooperation in Beijing in late April.

Relations between China and Italy date back centuries. In the 1200s, the Venetian merchant Marco Polo visited the Lugou Bridge, in present-day Beijing and called it the most beautiful in the world in "The Travels of Marco Polo." The span is now known as the Marco Polo Bridge.

Until recently, Italian luxury fashion brands were hugely popular among senior bureaucrats in China, with many wearing shoes made by Salvatore Ferragamo.

While Xi's fierce anti-corruption campaign has forced senior Chinese bureaucrats to do away with their Ferragamos, China remains a big market for Italian products, and Italy's exports to China are expanding.

China's bare-knuckled advancement into Europe has alarmed the U.S. more than any other country.

The U.S. has repeatedly expressed its displeasure with Italy's formal entry into the Belt and Road but has failed to persuade the European country to change its mind. The lure of Chinese money prevailed.

But China, for its part, is having to think about efficiency. With its domestic economy losing steam and debt swelling, along with increased public scrutiny, China cannot continue to splurge on overseas investments.

Pence's Washington address has been described as "the second Iron Curtain speech."

Seventy-three years after Churchill's historic words, Europe, which was torn between the U.S. and the Soviet Union, now finds itself facing the possibility of a new cold war between Washington and Beijing.