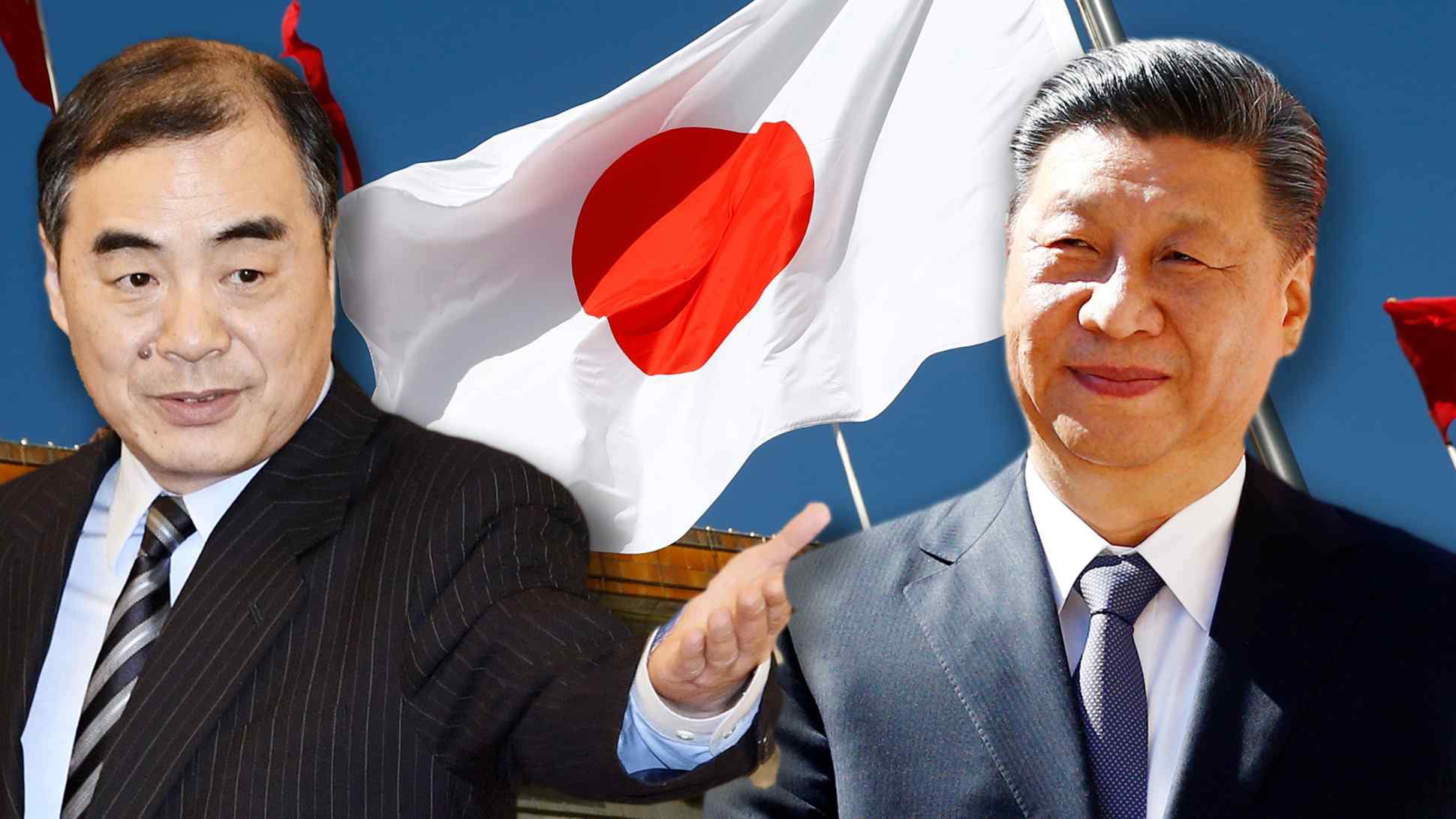 As China's next ambassador in Tokyo, Kong Xuanyou, left, will pave the way for President Xi Jinping to visit Japan, possibly twice, this year. (Nikkei montage/Reuters)
China up close

TOKYO -- China has decided to appoint top Japan expert Kong Xuanyou, currently the vice foreign minister, as its new ambassador to Tokyo as it seeks to improve bilateral relations amid its protracted trade war with the U.S.

China has already informed the Japanese government of the decision. Kong, 59, will arrive in Tokyo to take up the role as early as May, replacing Cheng Yonghua, 64, who has served as China's top envoy in Japan for a record nine years.

The move comes as the two Asian countries have started making arrangements for Xi Jinping's first visit to Japan as China's president. That will take place in late June, when Xi is due to attend the Group of 20 summit in Osaka.

Cheng's time in Japan was marred by uneasy Sino-Japanese ties; the ambassador often had his hands full trying to stabilize matters.

Kong is widely known to be the last true ace among Beijing's Japan hands, and his appointment reflects the difficult diplomatic environment China finds itself in.

"Xi may visit Japan twice this year," one source familiar with Sino-Japanese relations said. "First for the G-20 summit in Osaka and then for an official visit after autumn." 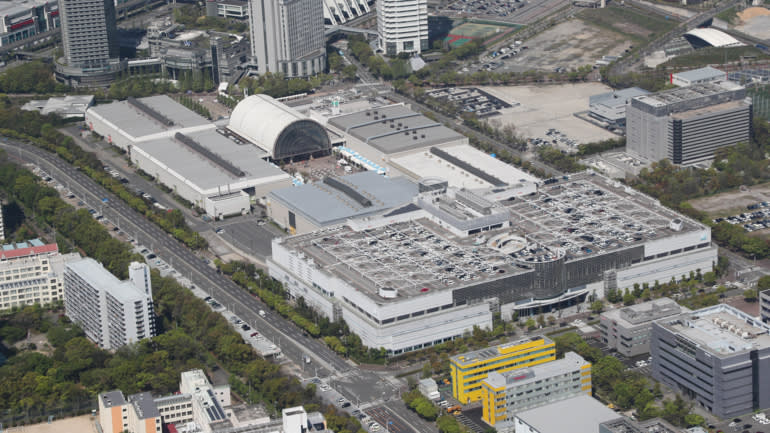 G-20 leaders will meet at the Intex Osaka convention hall in Osaka's Suminoe Ward about two and a half months from now. (Photo by Nozomu Ogawa)

The second visit would be the hot potato, the source said. "Kong is a competent diplomat suitable for the task of arranging the tricky visit."

Visiting Japan, a neighbor with which China has a complicated history, twice in one year has its risks. It is not unprecedented -- Xi's predecessor, Hu Jintao, visited the country twice in 2008.

But the truth is China remains noncommittal about Xi's post-autumn visit and is taking a wait-and-see attitude. Coordinating the visit will be difficult, requiring Kong to tap all his political contacts in Tokyo and fully utilize his diplomatic tool kit.

All eyes would be on whether Xi and Japanese Prime Minister Shinzo Abe could sign a so-called "fifth political document." Such a pact would seek to upgrade ties between Japan and China from "strategic, mutually beneficial relations," as agreed to during one of Hu's 2008 visits.

Without signing such an agreement, Xi could not count an official visit to Japan as a full success. But arranging for a fifth political document and the new, strong relations it would usher in will be no cakewalk, particularly amid the worsening ties between China and the U.S., Japan's most important ally.

The first political document between Japan and China is the 1972 joint statement that normalized bilateral diplomatic ties. The second came in 1978 in the shape of the Sino-Japanese peace and friendship treaty. These were followed by documents signed during a 1998 visit by President Jiang Zemin, and the Hu document of 2008.

Bilateral ties deteriorated soon after the third and fourth documents were signed, reflecting the sensitive nature of the countries' relationship. 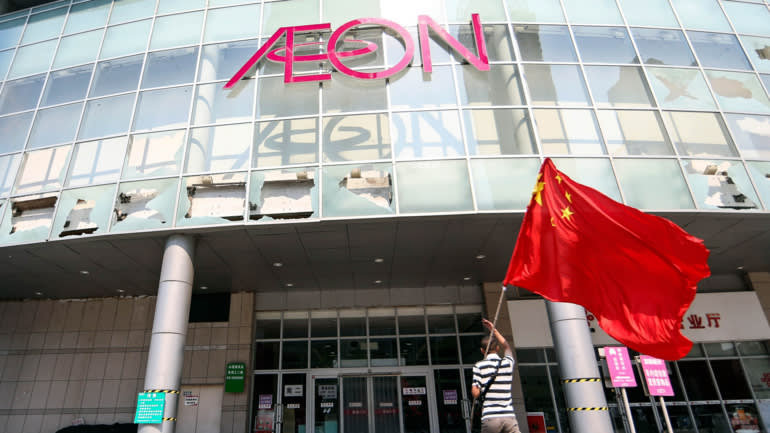 A demonstrator waves a Chinese flag outside a Japanese-funded shopping center during a protest in Qingdao, Shandong Province, in September 2012, after thousands of Chinese besieged the Japanese embassy in Beijing.   © Reuters

The search for Ambassador Cheng's replacement had been going on for a while. Many people were rumored to have been tipped for the job, and many declined offers, the common view goes.

Sino-Japanese relations are so delicate that people deeply entrenched in them risk being blamed for their deterioration and having careers careen sideways.

Organizational changes inside China's Ministry of Foreign Affairs have not helped. The Japan division has been merged with another in charge of the Korean Peninsula. Many say Beijing pushed ahead with the reform to snub Japan.

Kong has 15 years of experience in Japan. Fluent in Japanese, he was once tipped to be the most likely candidate to succeed Cheng. But in 2017, the foreign ministry chose to use Kong's skills -- he is also fluent in Korean -- in another area, watching over the North Korea file. And with Kong closing in on the retirement age of 60, some had thought his ticket to Tokyo had expired.

The nomination is also a result of the shifting power dynamic within the foreign affairs realm.

The power struggle goes back to September 2012, when tensions flared between Japan and China over Japan's nationalization of the Senkaku Islands in the East China Sea, a group of small uninhabited islets called the Diaoyu Islands in China.

Fence-mending began in 2014 when Prime Minister Abe visited China. He and Xi held talks on the sidelines of a summit of the Asia-Pacific Economic Cooperation forum in Beijing.

Taking the Chinese lead in arranging for the Abe-Xi meeting, however, were not the Japan hands led by Foreign Minister Wang Yi but rather U.S. specialist Yang Jiechi, who was serving as a state councilor. 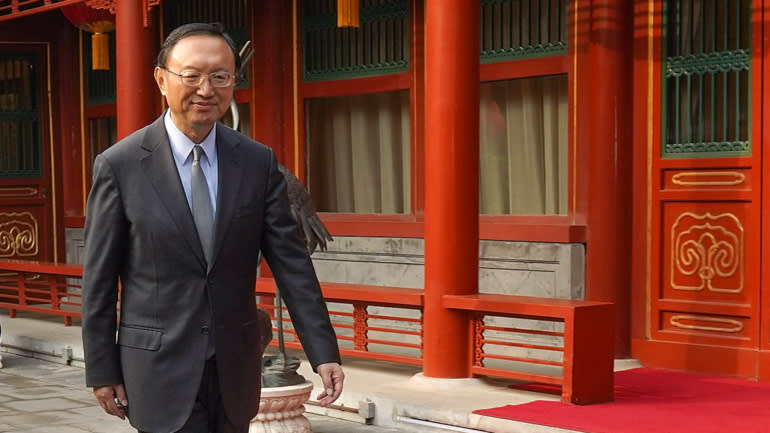 U.S. specialist Yang Jiechi -- a politburo member and director of the office of the party's central commission for foreign affairs -- has been bruised by the Sino-American trade war.   © Reuters

Under immense pressure, the Japan hands hurried to distance themselves from Tokyo. Wang, fluent in Japanese and a former Ambassador to Tokyo, directed harsh words at Japan. He appeared to be motivated by fear of being labeled "pro Japanese," which would put his political fortunes at risk.

His behavior disappointed and drew a strong backlash from Japanese people well-versed in Chinese affairs.

But his maneuver paid off. In March 2018 he was given the title of state councilor to go alongside his foreign minister position. He is now a vice premier-level official.

Yang too was promoted -- to the prestigious, 25-member Communist Party Politburo. He also serves as director of the office of the party's central commission for foreign affairs, a newly established commission under Xi's direct control.

China's Foreign Ministry, long sidelined by party leaders, has always dreamed of having a Politburo member in charge of diplomacy. Now, after many years of waiting, it has Yang Jiechi.

Yang has ruled over China's diplomacy. Along with his protege, U.S. Ambassador Cui Tiankai, he has implemented foreign polices with a focus on U.S. relations.

The bruising trade war with the U.S. has only intensified since last summer. A battle for technological supremacy has also broken out, with Chinese 5G equipment provider Huawei Technologies becoming a key focus.

U.S. Vice President Mike Pence's tirade against China, delivered in Washington in October, was a landmark event. In the speech, described by many as "the second Iron Curtain speech," Pence took an especially hard line against China.

These developments have kicked up headwinds in front of Yang and Cui. The Chinese leadership holds them responsible, albeit not publicly, for failing to accurately report changes in the U.S. Wang has emerged stronger as the balance of power in Beijing subtly shifts. Under Wang, China has started tweaking its diplomacy toward Asia. The appointment of Kong, highly regarded by Wang, as ambassador to Japan is part of these efforts.

As long as relations with the U.S. remain difficult, the importance of what China calls "neighboring-country diplomacy," especially with Japan, will grow.

Meanwhile, no major progress is likely anytime soon on the Korean Peninsula, Kong's other area of expertise, after the second summit between Trump and North Korean leader Kim Jong Un, in Hanoi, Vietnam, collapsed.

It was around that time, at the end of February, that China informally decided to appoint Kong as its top envoy to Japan.

Kong is useful from another standpoint.

On the sidelines of the forthcoming G-20 summit in Osaka on June 28-29, bilateral talks are also likely to be held, not only between Xi and Abe but also between Trump and Xi.

If Trump and Xi do sit down together in Osaka, the North Korea issue could also be high on their agenda. Ambassador Kong, who comes from an ethnic Korean minority and has amassed experience handling North Korean affairs, would be able to offer his insight.