TOKYO -- Yi Gang, the powerful governor of the People's Bank of China, began a high-profile press conference last Sunday in an unusual way: with a somber analysis of the country's economy that implied serious self-criticism.

Recent economic policies had caused a "credit crunch" in China, making borrowing more difficult and more expensive for small- and medium-sized companies and hurting the economy, he said in front of international reporters and TV cameras.

Yi was making his debut as central bank chief on the sidelines of the annual session of the National People's Congress, China's parliament, but the mood was far from joyous.

The central bank chief's frank remarks were a testament to the strong pressure he is facing from within the Chinese Communist Party. The term "credit crunch" is usually associated with policy failure and sits awkwardly with China's official announcement of 6.6% economic growth last year. People's Bank of China Gov. Yi Gang gives a somber analysis of the Chinese economy during the National People's Congress in Beijing on March 10. (Photo by Taro Yokosawa)

This was not the first time Yi had acknowledged policy failure. In November last year, he apologized in an interview published by the state-run Xinhua News Agency for the struggles private companies had to endure, saying the central bank's policy measures "lacked consideration."

It seems strange that only Yi has been under pressure to engage in public self-criticism, because he has only been in charge of the central bank for a year. In reality, all the current Chinese leaders involved in economic policy, including President Xi Jinping and Premier Li Keqiang, are responsible for the measures in question.

Xi doubles as the Communist Party's general secretary. As premier, Li is in charge of the State Council, the national government, and is ranked second in the party hierarchy after Xi.

But if the party's top two leaders engage in soul-searching over the economy, their authority would suffer. Under Communist Party rule, that is unacceptable and hence Yi has become the scapegoat.

Yi is not as powerful in the political arena as his central bank role suggests. In the party hierarchy, he only recently become an alternate member of the Central Committee, and is not even one of its 200 full members.

Yi's predecessor Zhou Xiaochuan held the post of central bank chief for as many as 15 years. Zhou was a seasoned central banker, with close ties to Zhu Rongji, a former Chinese premier well-versed in economic affairs, making it difficult for anyone to criticize him openly.

There is one more important point. Yi is part of China's negotiating team that has been engaged in high-profile trade talks with the U.S. He is a currency policy professional, trusted by Liu He, Xi's close economic adviser and vice premier.

Yi is a rare figure playing a dual role -- an official in charge of domestic financial policy and a negotiator with the U.S.

"That a person entrusted with the grave responsibility of negotiating with the U.S. must publicly acknowledge policy failure tells you something," one Chinese economic official said.

What he means is that the real target for party forces dissatisfied with the current Chinese economic conditions is Vice Premier Liu He, rather than Yi Gang. Liu is the top Chinese negotiator with the U.S. and has shuttled between Beijing and Washington, while Yi is his number two in the delegation.

Xi once introduced Liu to a U.S. dignitary, saying, "He (Liu) is very important to me." Xi's remarks were unusual as they revealed how close he was to Liu.

In fact, Liu has been in charge of the Chinese economy since the Xi regime's inauguration in 2012. Liu assumed the post of vice premier in charge of economic affairs a year ago, solidifying his reputation as China's economic czar.

Liu never grandstands. But he once appeared to be gaining political ground quickly and overtaking even Premier Li, who is supposed to preside over economic policy.

Liu, Xi's favorite retainer, is facing difficult negotiations with the U.S. while needing to watch his back at home. Liu cannot make concessions to the U.S. easily without drawing a strong backlash in China. 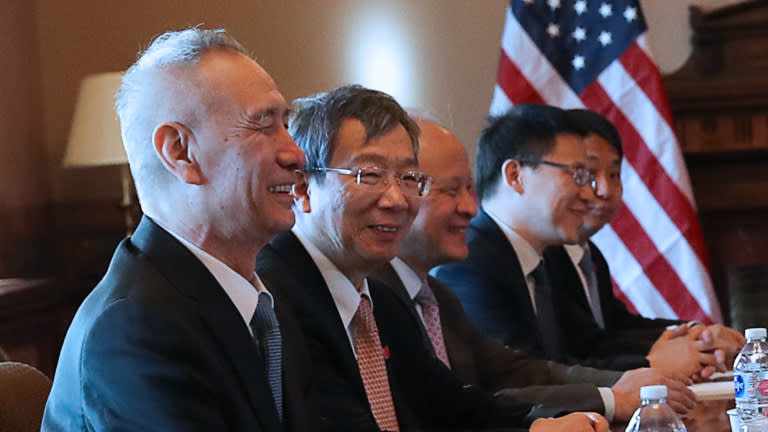 From left, Chinese Vice Premier Liu He and central bank Gov. Yi attend trade talks with the U.S. in Washington on Jan. 30.   © Reuters

What is happening to crucial U.S.-China negotiations and the setting-up of a next summit between the two countries?

There was an interesting scene symbolizing the current situation during a cabinet minister's press conference on the sidelines of the annual session of the National People's Congress.

A foreign journalist asked the cabinet minister in English whether the next U.S.-China summit would take place at U.S. President Donald Trump's Mar-a-Lago estate in Florida as early as the end of March.

The question as translated into Chinese went like this: "Is an agreement possible late this month?" It stunned foreign journalists who were there. There was no reference at all to a possible U.S.-China summit at Mar-a-Lago, the key part of the original English question.

Why did this happen?

Remarks translated into Chinese by simultaneous interpreters quickly circulate across the country through the official website of the National People's Congress and Chinese media outlets.

The interpreter in question deliberately did not translate fully the original question to avoid giving the impression to the Chinese that Xi's plan to visit Mar-a-Lago at the end of March has already been fixed.

In fact, Xi's plan to visit Mar-a-Lago has not been officially reported at all within China because of strict media controls. The interpreter in question translated the original English question into Chinese, while deliberately deleting its essential part, as instructed beforehand.

This shows that the U.S.-China negotiations have not yet made enough progress for the Beijing authorities to allow a possible deal between Xi and Trump to be reported within China.

All the signals suggest that the U.S. is being very demanding in its negotiations with China. A final round of talks and a bilateral summit to close a deal could be delayed. It also remains to be seen what impact Chinese tech giant Huawei Technologies' filing of a suit against the U.S. government will have on bilateral ties.