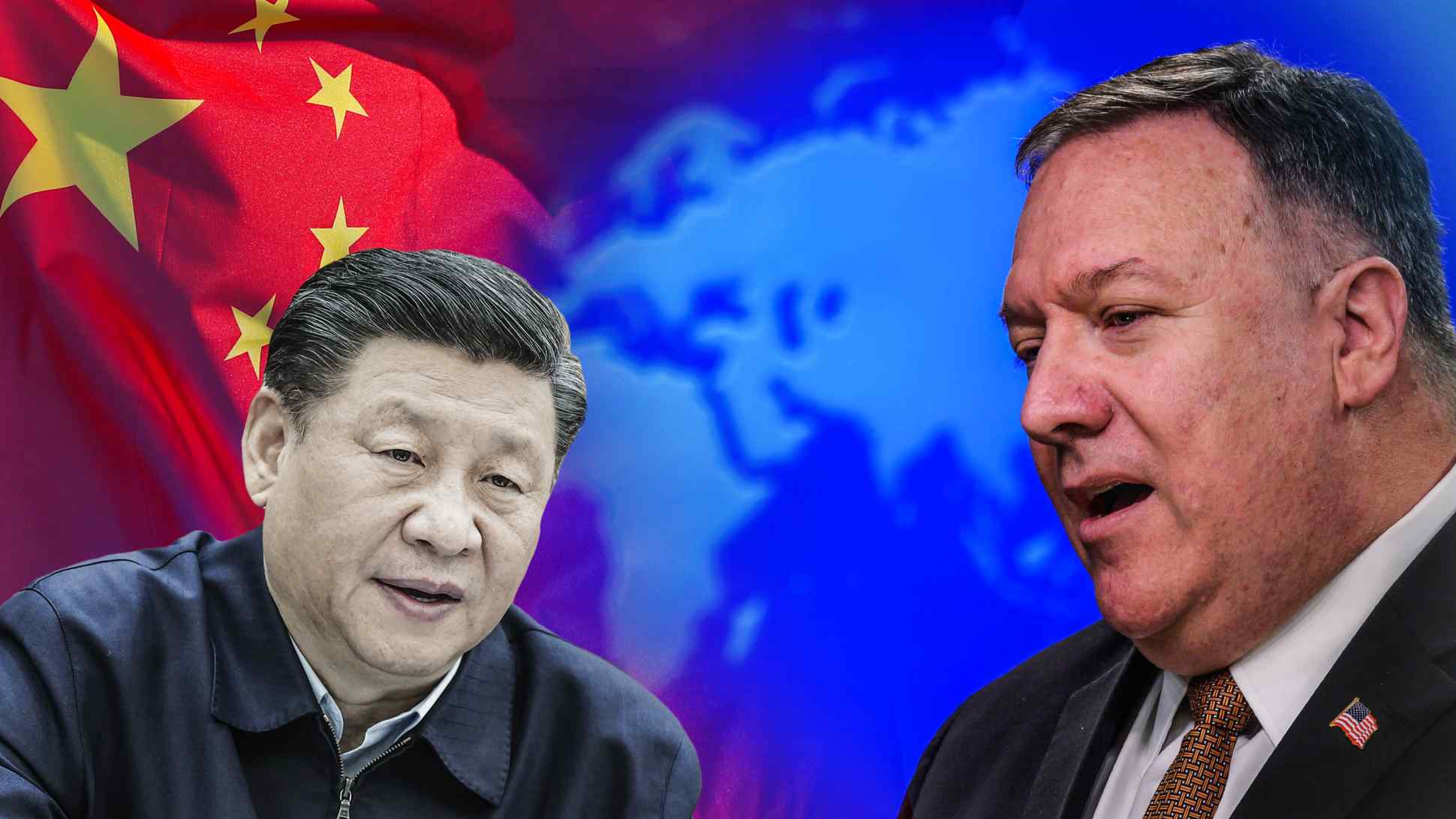 TOKYO -- China's state media has raised the volume on its criticism of U.S. Secretary of State Mike Pompeo, accusing him of spewing poison, spreading lies and turning his back on humanity for his comments about the coronavirus pandemic.

This kind of vicious attack on a single American official has not occurred since before U.S. President Richard Nixon made his historic visit to the communist state in 1972 to normalize relations.

"This is not normal," one Chinese scholar said in astonishment. "A foreign ministers meeting between the U.S. and China will be impossible for the foreseeable future."

The tensions spiked after Pompeo alleged Sunday that "enormous evidence" suggests the deadly virus originated in a Chinese laboratory.

As if to take a cue from the party and the government, prominent political commentators have launched a volley of attacks on Pompeo via the internet, including one that said: "We condemn the fatso to death." They have not been subject to deletion by Chinese censorship authorities.

The question now is whether China also will launch direct attacks on his boss, U.S. President Donald Trump.

Yet Beijing's offensive over the pandemic appears instead to be a defensive response, as Chinese President Xi Jinping looks to address political vulnerabilities as important historical dates near -- dates that now, oddly, seem to include the start of the Tokyo Summer Olympics.

"There is a reason why China is conducting an all-out bashing," a Communist Party source said. "You will know it if you read Xi's message on the anniversary of the May Fourth Movement."

The May Fourth Movement was a protest against imperialism by students and citizens that began May 4, 1919, in Beijing's Tiananmen Square and spread across China.

In his anniversary message this year, Xi praised young people for their contribution to the "people's war" on the coronavirus and called 2020 a "critical year" for securing a decisive victory in the fight to eradicate poverty and build a moderately prosperous society in all respects.

Xi signaled his intent to make 2020 a preparatory year for the realization of targets to commemorate "two centenaries."

The years 2021 and 2049 will mark the milestone 100th anniversaries of the founding of the Chinese Communist Party and the establishment of the People's Republic of China, respectively.

Xi, who doubles as the party's general secretary, had not mentioned the two centenaries recently, giving top priority to the fight against the coronavirus outbreak. His reference to the two centenaries in his anniversary message reflects an intention to shift gears. 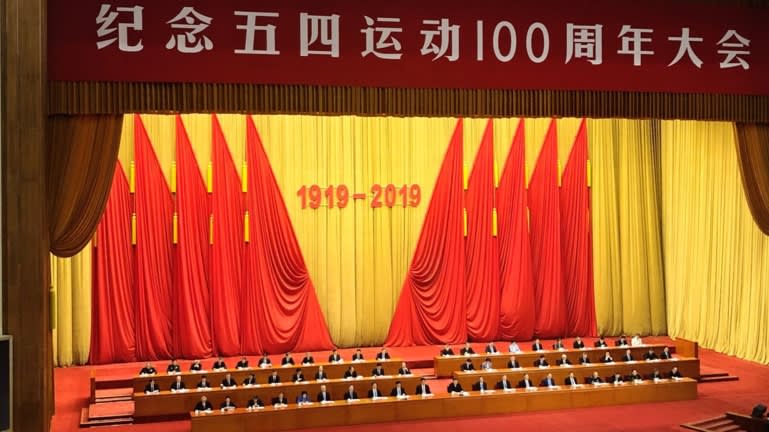 China's 100th anniversary of the May Fourth Movement was celebrated last year at the Great Hall of the People in Beijing.

The 100th anniversary of the Communist Party's foundation will be the biggest event in Xi's "new era."

But tangible achievements -- not just nominal ones -- will be essential on the political, economic, social, foreign and security fronts for the Chinese people to celebrate the centenary wholeheartedly. Yet poverty eradication is the only target in the books ahead of the 2021 anniversary.

Things look much murkier on the macroeconomic front. The goal of doubling per-capita gross domestic product by 2020 from 2010 standards appears in jeopardy, as growth in the first quarter shrank 6.8% from a year earlier. But China can always blame this on the coronavirus.

China's external relations are a more worrisome issue. Beijing regards its bilateral relationship with the U.S. as the most important, but these ties have soured to their worst since 1972. The Sino-American relationship, already strained by trade frictions, was dealt yet another serious blow by disputes over the coronavirus pandemic.

The increasing calls in the U.S. for China to pay damages related to the pandemic could prompt Washington to impose sanctions on Beijing again, including import tariff hikes.

Chinese responsibility related to the pandemic could become a central issue in this year's U.S. presidential campaign, something that worries Beijing.

With so much loss of life in the U.S., any calls for improving ties with China are unlikely to gain support from voters. Regardless of whether Trump or the presumed Democratic nominee, former Vice President Joe Biden, wins the November election, the issue of pandemic compensation may drag on into next year.

Though China's one-party state lacks democratic elections, it would be a mistake to think that the country's top leader is immune from criticism.

Xi lacks the kind of charisma possessed by past giants Mao Zedong and Deng Xiaoping. Therefore, he needs achievements -- ones that anybody can recognize.

Though Xi pushed through a constitutional revision in March 2018 to scrap the limit of two five-year terms for a Chinese president, he has no guarantee of remaining the country's leader, either officially or otherwise, beyond the Communist Party's next quinquennial national congress in autumn 2022.

In ways that are different from a U.S. president, Xi also worries whether he can stay in office. 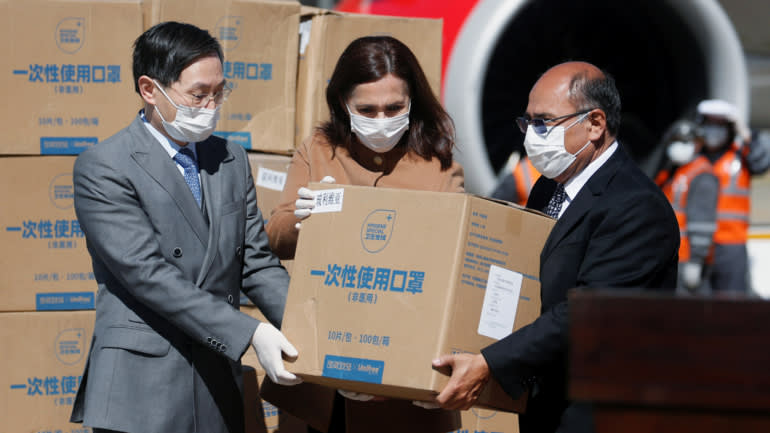 To celebrate the 100th anniversary of the Communist Party next year, Xi yearns for high praise from foreign countries over China's response to the coronavirus outbreak. But while that desire is understandable, achieving it is easier said than done.

For Chinese diplomats, the bulk of whom are Communist Party members, showing their loyalty to Xi is important. They have mobilized China's overseas diplomatic missions to seek high praise from foreign countries.

But this campaign has not gone well. With so many people worldwide dying or being hospitalized daily amid the pandemic, seeking praise would only backfire.

Inside China, Beijing can declare victory in the "people's war" on the virus and the country will fall in line. But Beijing cannot control the outside world.

Yet Chinese decision-makers have a tendency to treat domestic and foreign affairs in the same light.

China's verbal attacks on Pompeo appear to represent an aggressive defense with an eye on next year. Like a porcupine or hedgehog covered with sharp spines, Beijing is telling U.S. leaders that they will be hurt if they are not careful.

But the strategy lacks a plausible way out of the diplomatic deadlock with the U.S., even as China faces deeper frictions of late with European countries and Australia. 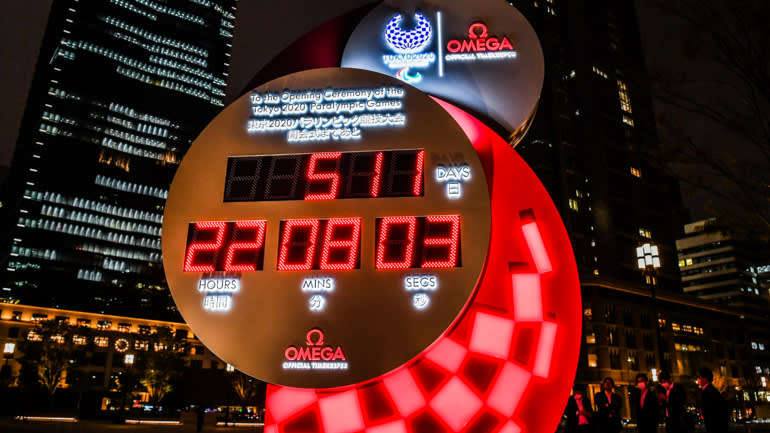 The postponement of the Tokyo Olympics to 2021 links the new start date to the 100th anniversary of the Chinese Communist Party. (Photo by Masayuki Terazawa)

The relevance appears tied to a remarkable coincidence.

The Chinese Communist Party was born July 23, 1921, when the group held its first national congress secretly in Shanghai.

The Tokyo Olympics, postponed from summer 2020 by the pandemic, are now scheduled to open July 23, 2021 -- the 100th birthday of the Chinese Communist Party.

The coronavirus, which delayed Xi's planned visit to Japan as a state guest and pushed back the quadrennial sports spectacle, has made July 23, 2021, a critical date for both Xi and Japanese Prime Minister Shinzo Abe.

If second and third waves of the coronavirus outbreak hit countries this winter or next spring without effective vaccines and treatments, holding the Tokyo Olympics in a normal manner will prove difficult. But that danger extends to the Winter Olympics in Beijing, set to open Feb. 4, 2022.

Xi's image at home and abroad depends partly on whether the pandemic can be brought under control. This means the coronavirus will have some impact on whether he stays in office beyond autumn 2022.