President Xi Jinping in Wuhan peers down from a TV at a shopping center in Beijing as an incipient second wave of the coronavirus pandemic threatens to undo China's sacrifices.   © Reuters
China up close

China's inaction for 3 days in January at root of pandemic

TOKYO -- Chinese students are returning home in droves from European countries, convinced that it is now safer to be in China to avoid the new coronavirus.

For municipalities such as Beijing, the arrivals pose a serious risk of a second wave of infections, as the students come back from virus-hit nations.

Right as the battle against the invisible enemy looked as if it had turned a corner and given China a glimmer of hope, the second wave threatens to cancel hard-earned gains.

The response toward the students has been harsh on Chinese social media. "They left the country in the first place because they like foreign countries better. Don't return with the virus now," one poster wrote.

"They are spoiled rich kids, and they run away when times get tough," wrote another.

Fearing a second wave, the Beijing government made a bombshell announcement that all travelers arriving in the Chinese capital from abroad would be forcibly quarantined for 14 days at "centralized observation centers" designated by authorities. An official in protective gear sits at a table as arriving passengers walk through a temperature screening station at Beijing Capital International Airport on March 12.   © Kyodo

The compulsory quarantine, which went into force on Monday, applies to foreign nationals as well. Arrivals are isolated regardless of whether they have symptoms, and they have to pay for their stay.

The purpose of the compulsory quarantine is to tightly control SARS-CoV-2 -- the new coronavirus that has spread to various parts of the world from Wuhan, in China's Hubei Province.

The number of cases brought back into China from abroad has been surging in recent days. According to figures released by the Chinese government on Tuesday, the total number of imported cases in China reached 143, with Beijing alone accounting for 40 of them.

The infections have ignited worries of a small leak sinking a great ship.

If the virus were to catch fire again, this time through carriers coming back from overseas, all the stringent movement-restrictions enforced within China will have been meaningless. The progress made so far in the "people's war on the virus," which Chinese President Xi Jinping repeatedly talks about, could be reduced to ashes.

Zhong's team made an interesting observation of the threat China was facing in the initial stages of the crisis. Noting that the actual situation in Hubei in January was far worse than the media was suggesting, his team said that "a five-day delay in controlling the virus would have led to three times as many infections."

The team added that a "failure to control the situation in Wuhan would have caused a second peak of the outbreak in Hubei Province around mid-March and would have continued until late April."

It was a race against time.

In retrospect, it was a painful mistake. This is what happened in those critical three days:

The weeklong Lunar New Year string of holidays began on Jan. 24, with the outbound traffic peak lasting through Jan. 27.

The Chinese government let the massive exodus of group travelers continue despite the public health crisis. No explanation has been given.

Furthermore, while suspending group travel, China did nothing to limit individuals traveling overseas.

Groups account for less than half of all Chinese tourists heading abroad. 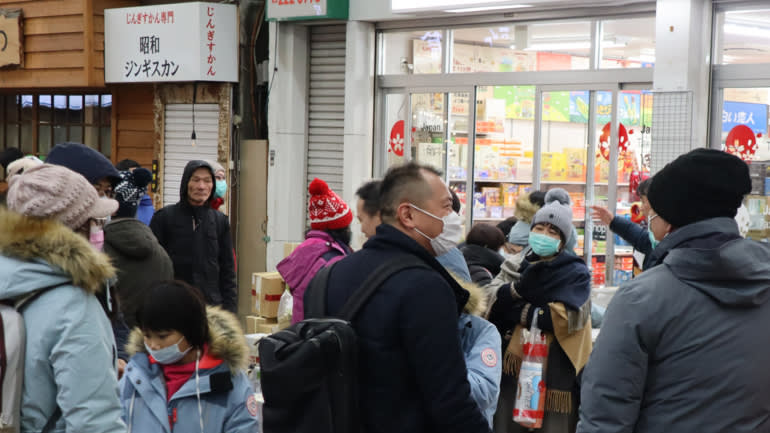 Sapporo continued to play host to Chinese tourists even after the Snow Festival had concluded. (Photo by Ken Kobayashi)

This was happening while many restaurants in China were unable to open for business due to the outbreak. It is said that once abroad, many Chinese prolonged their vacations as much as possible to avoid having to return home.

The number of infections gradually increased at popular winter destinations, such as Japan's Hokkaido. In other destinations like Thailand, cases have surged in recent days.

A considerable number of Chinese individual travelers were staying put in the Hokkaido capital of Sapporo in mid-February, even after the annual Snow Festival ended.

The five-day delay that Zhong's team warned about did not happen. But in reality, a three-day delay did. And as the doctor predicted, infections spread to many people, and across the world. Now we are seeing the "second wave" that the team talked about.

After the first wave hit China, the outbreak went on a second wave across the world, especially in Europe. The number of deaths from the coronavirus in Italy, home to many Chinese residents, has topped 2,100.

The delay in the Chinese government's ban on group travel to foreign countries may have helped to double or possibly triple the number of people infected.

In the days before Wuhan was locked down on Jan. 23, as many as 5 million of its 11 million citizens had already left the city, as the mayor and others have testified.

Chinese authorities are now busy coping with a growing number of coronavirus cases flying back into the country. A Chinese Foreign Ministry spokesperson described the inflow as "the main risk" the country is facing.

To accommodate the inbound travelers, the Beijing government has reopened Xiaotangshan Hospital. If travelers arriving in Beijing on flights from abroad test positive for the virus during their compulsory 14-day intensive observation period, they will be sent to the hospital, which has a little more than 1,000 beds.

The hospital is far away from the central part of Beijing. It was thrown up during the 2003 outbreak of severe acute respiratory syndrome to quarantine patients. This time, renovation work was launched at the end of January to prepare for a possible dramatic rise in the number of patients in Beijing.

The reopening is a symbol of Beijing facing another crisis.

The compulsory 14-day quarantine cannot be good for business. Foreign businesspeople will likely be scared away. It will become difficult for China to attract foreign investment, and supply chain disruptions could become even more serious.

Already, China's economy has been dealt a serious blow. The main economic figures for the January-February period, including industrial production, all posted negative growth for the first time since records began. Growth in gross domestic product for the January-March quarter is also likely to be negative.

The virus's spread in Europe and the U.S. will lead to a slump in demand for goods exported by China.

The current crisis will also affect China's politics. When can a postponed annual session of the National People's Congress, China's parliament, be held? It depends on whether the second wave of infections can be contained.

The Chinese leadership has envisioned a V-shaped economic recovery beginning in April. But the global spread of the virus has cast a dark cloud over that scenario.

Xi's team faces a bumpy road ahead as it seeks to simultaneously move the stalled domestic economy ahead and bring the virus under control.