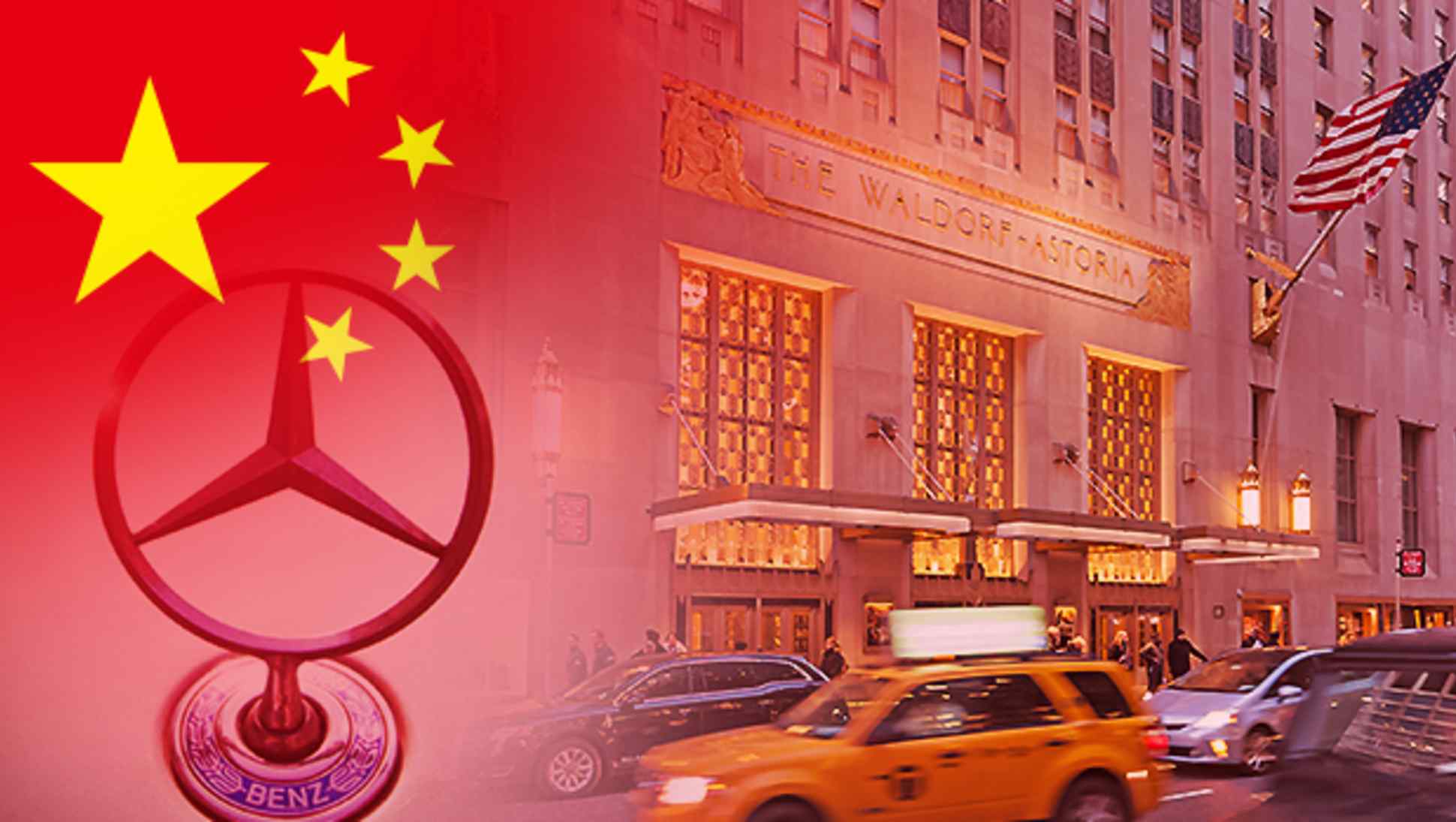 TOKYO -- Up on the 42nd floor of the Waldorf Astoria hotel in New York, the Royal Suite occupies the entire 50th Street side of the tower. The chandelier-lit chamber with stunning views of the Manhattan skyline is where Wu Xiaohui, the 51-year-old founder and top official of China's Anbang Insurance Group, liked to greet his guests.

The Waldorf had been the hotel of choice for U.S. presidents when they visited the city, as well as being the official residence of the U.S. ambassador to the United Nations since 1947.

In 2014, Anbang acquired the grand hotel for $1.95 billion from Blackstone-owned Hilton Worldwide Holdings. Wu started using the Royal Suite as his greeting room, and the U.S. State Department subsequently canceled its expensive rent contract for the ambassador's residence on the opposite side of the top floor.

The Royal Suite was so named because the Duke and Duchess of Windsor made it their New York residence. It could be that Wu preferred the Royal Suite over the Presidential or Penthouse suites because he considered himself part of China's "royal family." He married the granddaughter of paramount leader Deng Xiaoping.

But such royalty means little these days under President Xi Jinping.

On Feb. 23 it was announced that China's insurance regulator would immediately take over Anbang for a year in light of Wu's "economic crimes." The Waldorf Astoria New York, therefore, now belongs to the Chinese government. 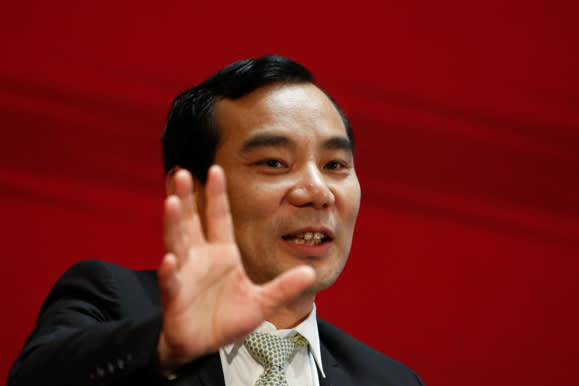 Wu Xiaohui wears an expression that betrays no clue of the fate that would befall him almost a year after this picture was taken in Beijing in March 2017.   © Reuters

Xi's constitutional gambit almost coincided with two pieces of news that shocked the world. The headlines highlighted the contrasting fortunes of major Chinese companies with close ties to Zhejiang Province.

One was the indictment of Anbang's Wu, who is a Zhejiang native. The other was that Zhejiang Geely Holding Group, an automaker based in Zhejiang Province, had become the leading shareholder at German automaker Daimler.

Wu was a car dealer in Zhejiang and made his first fortune there. He refers to himself as a "self-made man." But he also made some good political connections as his marriage attests.

His wife gave Wu a ticket into the club of second-generation reds, a group of children of the communist revolutionary leaders who routed the nationalists in the deadly civil war. Even today, the second generation wields enormous political and economic influence in China, and the Deng family has long been its most powerful force.

Anbang was also supported behind the scenes by Chen Xiaolu, an influential member of the second-generation reds. Chen was the son of Chen Yi, one of the 10 marshals of the People's Liberation Army.

With the backing of the Deng family and Chen, Anbang achieved meteoric growth. Despite its relatively short history -- Anbang was established in 2004 -- the insurance company became a global player, as the Waldorf acquisition shows.

But Anbang's unconventional expansion was not just the result of the company's corporate efforts.

It was an open secret that serious misconduct involving Anbang had long been overlooked due to its political connections. The company was seen to be "protected."

Quite symbolically, on Wednesday, just five days after Wu was indicted, Chen Xiaolu suffered a sudden heart attack on the southern tourist island of Hainan. He was carried to the People's Liberation Army General Hospital but died. He was 71.

As Wu's fate shows, Xi's anti-corruption crusade has begun to spread even to the second-generation reds.

The once-unrivaled Deng family is in sharp decline. According to Chinese media reports, Deng's granddaughter has already "ceased" her marriage to Wu. The eastern coastal province of Zhejiang is best known for West Lake, a World Heritage site whose scenic beauty has been intoxicating sweethearts and poets for centuries.

Zhejiang offered Mao Zedong another kind of respite. Chairman Mao would make frequent sojourns to the capital, Hangzhou, when he wanted to recharge his batteries for the political battles in Beijing.

The province would play another role for Xi Jinping, who was Zhejiang's top official from 2002 to 2007. Many of the connections Xi made during his time there endure, and the province is the stronghold of the "Zhejiang faction," the core of Xi's political group.

The Chinese government's move to nationalize Anbang stands in stark contrast to the fate of another Zhejiang company, Geely. 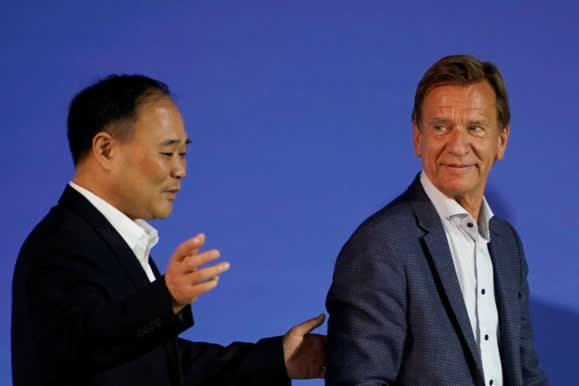 Geely is far from a household name outside of China, but on Feb. 23 it was disclosed that the automaker had become the top shareholder of Daimler. Geely now holds an equity stake of nearly 10% in the company that boasts the luxury Mercedes-Benz nameplate.

During his time in Zhejiang, Xi formed a close relationship with Li.

Afterward, Geely's rapid rise in the auto industry mirrored Xi's climb to the top of the Chinese Communist Party.

Now Geely seems to be something of a favorite child. Although Chinese authorities have tightened foreign currency controls, Geely was able to secure a huge amount of financing to acquire the nearly 10% stake in Daimler.

Wu, like Li, is a native of Zhejiang. He was born in the city of Wenzhou. Despite his close links with Zhejiang, Wu was targeted by Xi's massive cleanup of the financial industry.

Shortly after Donald Trump won the U.S. presidential election in November 2016, Anbang's Wu dined with Jared Kushner, Trump's son-in-law and now an embattled senior White House adviser, at a Chinese restaurant in the Waldorf. They discussed a joint venture for a redevelopment project in Manhattan.

Wu was basking in the glow of success. 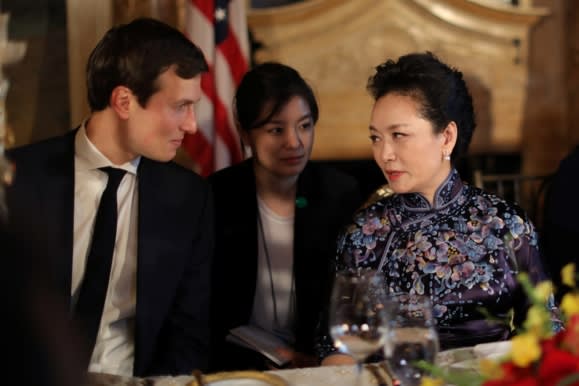 But Wu dined with Kushner without obtaining consent from the Xi administration. Wu's fortunes took a sudden turn for the worse about half a year later, partly due to his lack of communication with Xi.

"Wu's boss is not Xi," said a Chinese source familiar with the party's internal affairs. "Deng Xiaoping's family was behind Wu. Wu's indictment and Anbang's nationalization mean the complete end of the Deng Xiaoping era in the broad sense, which includes the eras of former presidents Jiang Zemin and Hu Jintao."

Blame political affiliation. Unlike Li, Wu is not close to Xi's Zhejiang faction. Nevertheless, Wu acted as though he was impervious to consequences, misreading the big political shift that was taking place in China. Eventually, the Zhejiang faction deemed Wu distrustful, someone who might be able to catch it off guard.

Wu probably never imagined that the Deng era would end so early. But he has no one but himself to blame for the way he played his cards.

In China, there is no purely private major company that can act without having to answer to the party. Even private corporations have party cells, and these cells are where decisions are made.

Like state-owned companies, even private companies need to bring their management strictly in line with government policies. If they fail to do so, they will be forced into liquidation quickly, as the Anbang case suggests.

China has advocated a "socialist market economy." Its big corporate groups, whether state-run or privately held, are, in effect, owned by the party. This state of affairs is now a global reality.