While prioritizing internal politics, President Xi Jinping has gone almost a full year without putting forward a basic policy on how China's economy will be managed. (Nikkei Montage/ Reuters)
China up close

TOKYO -- The Chinese yuan fell below the 7-per-dollar level for the first time in 11 years soon after the Communist Party's annual conclave began at the seaside resort of Beidaihe, Hebei Province.

"The government wants to promote exports and buoy business sentiment," a Chinese market participant explained. "But even so, intentionally letting the yuan pass the 7-per-dollar line, something they had been so vigilantly defending, was shocking."

Chinese market players interpreted the currency move, which came on Monday, as an emergency response to U.S. President Donald Trump's threat of a further round of punitive import tariffs. The step most certainly received the greenlight from leaders staying in Beidaihe. But it backfired.

Addressing China's currency manipulation was an important item in a 150-page draft of a U.S.-China trade deal that existed until May.

The escalation of tensions -- China also announced it was temporarily halting purchases of U.S. agricultural products -- rattled stock markets around the world. In China, the benchmark Shanghai Composite Index sank well below 2,900, the level that had been said to be Chinese authorities' defense line.

To many, Trump and his many flip-flops on policy are the primary cause of the global market turmoil. But this reading misses the forest for the trees.

"Most people do not understand the true nature of this phenomenon," a Chinese source involved in economic policy said. "What is happening now is based on the tug of war in Chinese politics that has continued for the past year and a half."

In reverse chronological order, the U.S. and China held a fresh round of trade negotiations in Shanghai at the end of July. This followed a summit between Trump and Chinese President Xi Jinping in Osaka at the end of June.

The Shanghai talks ended earlier than scheduled with neither side having much to offer. The round essentially broke down, with Beijing and Washington barely able to agree to meet again in the U.S. in September.

No progress has been made since early May, when China slashed the draft text of a trade deal compiled during five months of talks from 150 pages to 105 and sent it back to the U.S.

The crux of the matter, one Chinese political researcher said, is that the fourth plenary session of the 19th Central Committee of the Communist Party, a key gathering which sets the basic five-year policy on economic management, has been delayed for nearly a year.

"Under such circumstances," the researcher said, "it is difficult for China to bring negotiations with the U.S. to a conclusion."

Astonishingly, China has gone almost a full year with no basic policy on future economic management. Such a plan cannot be formally adopted without holding the fourth plenary session.

The Chinese Communist Party's 25-member Politburo meets every month. But announcements that come from these meetings are limited to the Politburo's views on the economic situation of the time and interim measures to cope with certain issues. They are not about basic policy.

After tearing up the trade deal in May, Xi visited the historic launching point of the 1934-1936 Long March in Jiangxi Province. Standing at the sacred site, he called for a "new Long March" in preparation for a protracted battle with the U.S.

In reality, however, the visit appears to have been an act of subterfuge to obscure the fact that China has no long-term economic strategy toward the U.S. 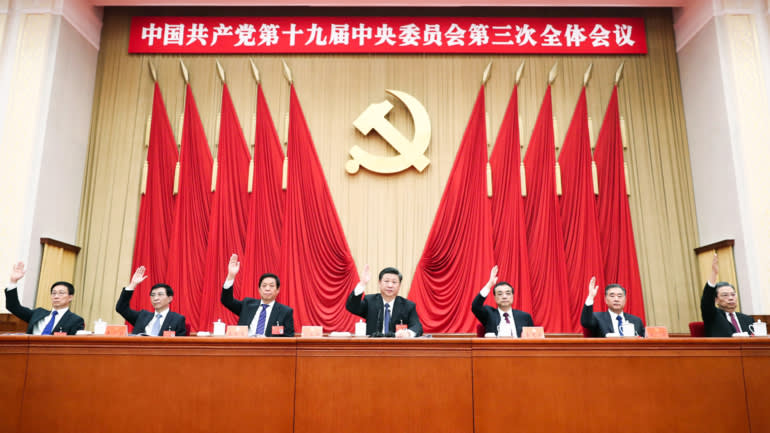 The second and third plenary sessions of the 19th Central Committee were held in early 2018 to prepare for an annual session of the National People's Congress. (Xinhua/Kyodo)

Under party rules, the Central Committee is supposed to hold a plenary session at least once a year, with 200-plus full members and 170-plus alternate members attending.

National party congresses are held once every five years, and it is long-standing custom for the party to convene a third Central Committee plenary session to set basic economic policy in the autumn of the year after a national congress.

But the second and third plenary sessions were both held in early 2018 to prepare for an annual session of the National People's Congress, China's parliament, in March that year.

During the parliamentary session, the national constitution was revised, eliminating presidential term limits.

Since then, Xi seems to have prioritized cementing his grip on political power. This is why the constitutional revision, which paved the way for Xi to remain "president for life" was so important.

Emboldened by the elimination of presidential term limits, a group of close aides to Xi last summer blatantly pushed ahead with measures that built what strongly smacked of a "personality cult" around the president.

These efforts drew a strong backlash from elders and rival party factions, and began to lose steam after last summer's Beidaihe conclave.

If the fourth plenary session had been held last fall, immediately after the Beidaihe conclave, various demands might have surfaced regarding the personality cult, Xi's successor and the economy. Such a situation would have put Xi and his allies at a disadvantage.

This group wanted to let the dust settle before convening the fourth plenary session.

Another roadblock took the form of growing doubts within the party about Vice Premier Liu He's ability to preside over Xi's macroeconomic policies.

Had the fourth plenary session been held then, it could have plunged Xi into a crisis and possibly sparked calls for Premier Li Keqiang, who heads the State Council, China's government, to be allowed to play a greater role in managing China's economy.

Xi and Li are rivals who once vied for the party's top post. Li is now ranked second in the party hierarchy. Any move similar to a no-confidence vote against the Xi-Liu team would have strengthened Li -- another reason why Xi had no choice but to delay the fourth plenary session, according to many people concerned.

Some sources explained that the fourth plenary session was delayed because of uncertainty over how trade friction with the U.S. would play out. But the delay has not helped China make progress toward a solution. In fact, with its basic domestic and external economic policies remaining unclear, Beijing has impeded its ability to negotiate with the U.S.

Party rules dictate that Xi convene the fourth plenary session by the end of the year. This being the case, the president and party chief should do so as soon as possible. If Xi instead drags his feet, he could inflict real harm on China's economy.

Going forward, the negotiations with the U.S. will focus on whether China can return to something close to the deal it gutted in May. The answer to this could also affect Xi's future.

If Xi is able to prevent China's confrontation with the U.S. from further escalating, he will all but guarantee that he will remain as China's top leader at the party's next national congress, in 2022.

Consider the fourth plenary session as the first hurdle Xi must clear as he heads toward that national congress.