China's risky bet on Wall Street for help with Trump

Kissinger and Paulson are Beijing's preferred intermediaries: can it work?

TOKYO -- An ancient Chinese proverb says: "When drinking water from a well, one should never forget who dug it."

Ahead of a crucial summit with U.S. President Donald Trump later this month, Chinese President Xi Jinping and his right hand man, Vice President Wang Qishan, have reached out to the well-diggers of the U.S.-China relationship for guidance.

Former U.S. Secretary of State Henry Kissinger and former U.S. Treasury Secretary Henry Paulson have been friends of China for decades. Between them, they have visited China over 150 times.

Whether they are also friends of Trump, or whether they carry any weight with him as intermediaries is questionable. But the truth is that after two years of this presidency, Beijing has yet to find a reliable conduit to the White House.

And so it was the 95-year old Kissinger that was invited to Beijing in mid-November to give advice. The legendary diplomat was the key figure in normalizing relations with China, making a secret trip in 1971 and paving the way for President Richard Nixon to visit the year after.

The counterparts of that historic trip, Chairman Mao Zedong and Premier Zhou Enlai, both died five years after the Nixon trip. But Kissinger is very much alive and still flying around the world.

On the evenings of Nov. 8 and Nov. 10, state-run China Central Television's main news program reported on Kissinger's visit, first mentioning his talks with Xi and then his talks with Wang. The coverage of Kissinger's meeting with Wang said it all. Held in Beijing's Zhongnanhai area, China's political nerve center where the country's leaders are based, the Wang-Kissinger meeting was the day's top story. It took precedence over the closing of the first China International Import Expo, the trade fair in Shanghai which ran through Nov. 5-10, and was dubbed by Beijing the most important diplomatic event of the year.

Two years ago, when Trump unexpectedly won the presidency, Beijing summoned Kissinger for advice. The sage met Trump to exchange views on international affairs beforehand. After arriving in Beijing, Kissinger held talks with both Wang and Xi over two days and advised them on how to deal with Trump.

The main message was: "Avoid confrontation."

Since then, Sino-U.S. relations have deteriorated more quickly than anyone expected. That is primarily because Xi and Wang failed to fully follow or understand Kissinger's advice.

At the Chinese Communist Party's 19th national congress in October 2017, Xi, who doubles as the ruling party's general secretary, declared China's "great power" policy of seeking to overtake the U.S. as early as 2035.

For China, it was a domestic political goal and not intended to stoke confrontation deliberately with the U.S. But the Trump administration reacted sharply to the Chinese move.

A few days before the Kissinger visit to Beijing, Bloomberg hosted a high-profile business symposium in Singapore titled the New Economy Forum.

China saw the forum as worth taking advantage of, and Wang flew to Singapore to give a keynote speech. It is extremely rare for Wang to attend an event outside China hosted by a private company.

Apart from speaking, Wang also had talks with Kissinger, who was attending the forum as honorary chairman of its advisory board.

Also attending the Singapore event was Henry Paulson, who was serving as the chairman of the forum's advisory board.

Paulson, a former chairman of U.S. financial services giant Goldman Sachs, has visited China frequently. Chinese media reported that Paulson had visited China 70 times even before assuming the post of treasury secretary in 2006.

Paulson made many of his China visits at Wang's invitation. They have a long-standing relationship dating back to the 1990s, when Wang was still serving as governor of state-owned China Construction Bank and Paulson was working for Goldman Sachs.

The 1.95-meter tall former banker had harsh words for both the U.S. and China.

"How can it be that those who know China best, work there, do business there, make money there, and have advocated for productive relations in the past, are among those now arguing for more confrontation?" Paulson asked in criticism of China's recent policies. "The answer lies in the story of stalled competition policy, and the slow pace of opening, over nearly two decades." 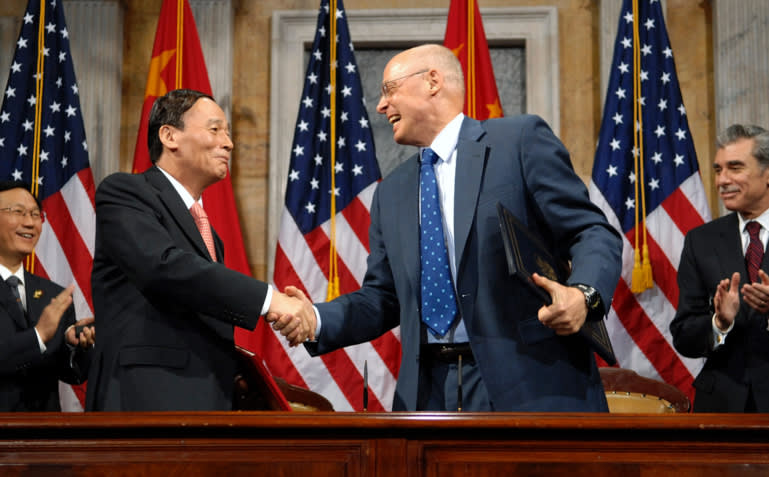 Wang Qishan, left, and Henry Paulson go back a long way. Here they are seen shaking hands as Chinese vice premier and U.S. Treasury Secretary in Washington in June 2008.   © Reuters

China has lost, Paulson noted, "the bold impulse to reform and open up that led leaders like Zhu Rongji to undertake significant changes to the state-led sector in the 1990s, as Beijing prepared for its WTO accession."

The Financial Times wrote on Wednesday that some believe Paulson's criticism of China "was actually encouraged by senior members of Mr. Xi's own administration, who feel the Chinese president has overreached but are too scared to say it to his face."

Paulson also had harsh words for the White House. "I simply do not understand the Trump Administration's rejection of approaches that would align the trade architecture in Asia more compellingly. To be blunt about this, I wish President Trump would reconsider his decision to withdraw from the Trans-Pacific Partnership," he said.

But the underlying message of the Paulson speech was to call for a resolution to the trade war and for "statesmanship" to prevail, so that "a long winter" could be avoided.

Two days later, the White House's leading China hawk, trader adviser Peter Navarro delivered a speech at the Center for Strategic and International Studies in Washington, which categorically denied the need for such reconciliation with China.

"When these unpaid foreign agents engage in this kind of diplomacy, so-called diplomacy, all they do is weaken this president and his negotiating position," Navarro said.

A truce in the Sino-U.S. trade war will likely bode well for stock prices and Wall Street has high hopes for the planned Xi-Trump summit in Argentina. Navarro was essentially calling out Wall Street's ulterior motives.

Navarro also criticized Goldman Sachs, Paulson's former employer, by name. "Wall Street, get out of those negotiations. Go to Dayton, Ohio. Bring your Goldman Sachs money to Dayton, Ohio, and invest in America," he said. Ohio's manufacturing industry has declined in recent years.

Wang Qishan has approached Kissinger and Paulson through various channels because he sees them as the most pro-China figures in the spheres of national security and finance respectively.

Wang has served as a conduit for relations with the U.S. for many years. But this does not mean that he is confident now. In fact, he saw his diplomatic maneuvering toward the U.S. derailed in September.

On Wang's initiative, China invited influential figures on Wall Street to Beijing in September for a "China-U.S. Financial Roundtable" in an attempt to send a message to the Trump administration that it was considering giving favorable treatment to U.S. financial institutions.

China turned to the Wall Street heavyweights because it felt they had a certain understanding of the country. But Beijing's diplomatic gambit failed.

The Trump administration spurned the olive branch from China ahead of the Nov. 6 U.S. midterm elections and imposed a third round of punitive import tariffs on Chinese products.

In a speech on Oct. 4, U.S. Vice President Mike Pence launched an all-out attack on Beijing over various issues, including security as well as trade and economic policy. The highly publicized speech raised the specter of a long Sino-U.S. Cold War.

As a result, there was nothing Wang was able to do in terms of behind-the-scenes diplomatic maneuvering toward the U.S. until the political storm that had raged ahead of the U.S. midterm elections was over.

China is a country controlled by the Communist Party, which cannot shed Marxism-Leninism. It is ironic for such a country to rely for help on Wall Street, the embodiment of capitalism and globalization.

It is clear that China's political system has no real affinity for Wall Street. So will the Xi-Wang duo's risky U.S. strategy succeed?