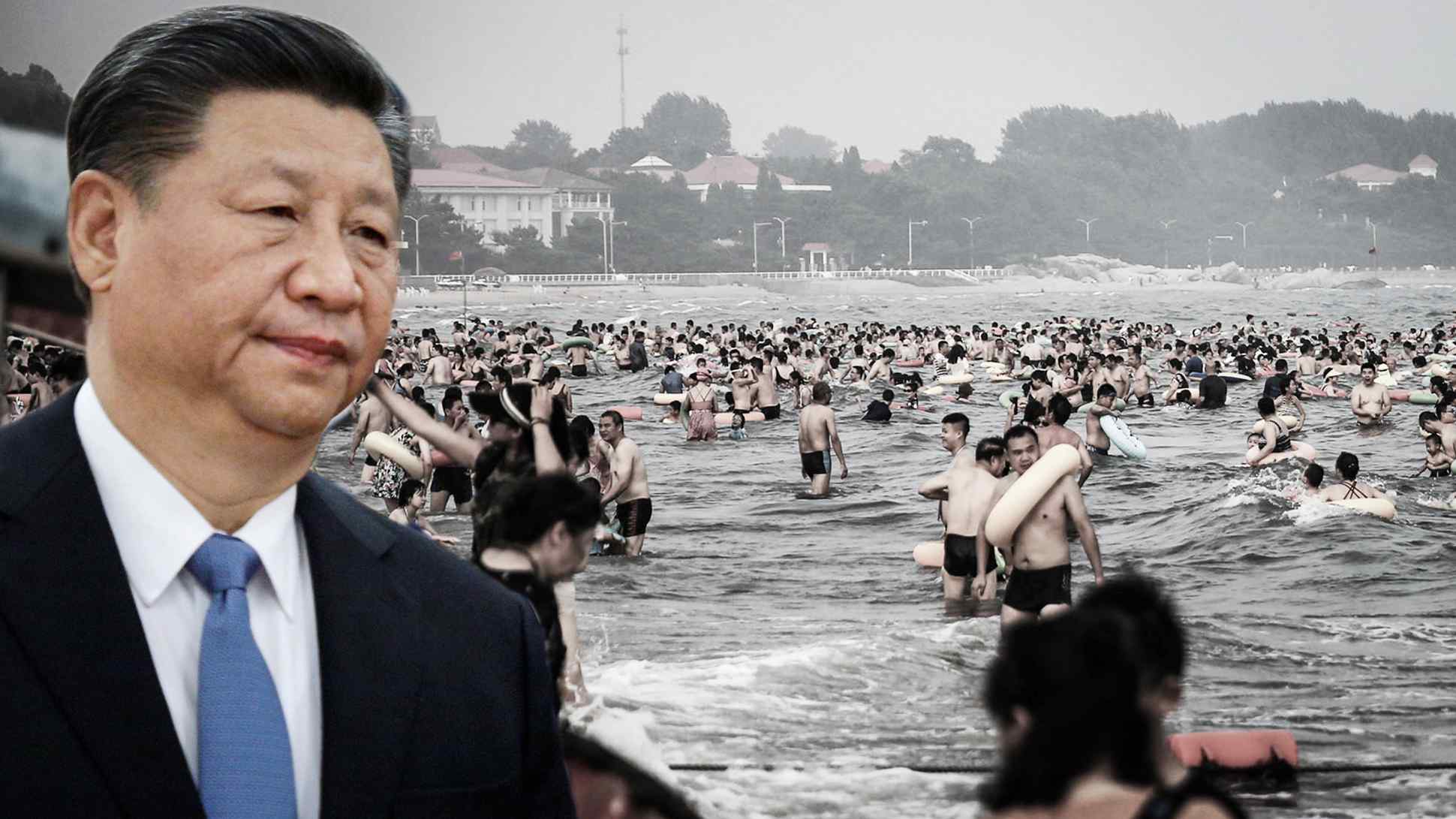 Chinese President Xi Jinping vanished from state media for more than half a month. Was he at the seaside resort of Beidaihe? There have been no clues. (Nikkei montage/Source photos by AP and Reuters)
China up close

TOKYO -- Has China's annual summer ritual, the unofficial meetings between incumbent leaders and party elders at the seaside resort of Beidaihe, taken place this year?

The extended absence of the top leadership from state media -- the whereabouts of President Xi Jinping was unknown for more than half a month -- suggested that something was happening. Yet there were none of the usual hints that the government drops to informally announce that the leaders were gathered in the Hebei Province beach town.

Political pundits within the country have been left scratching their heads.

"This summer is not normal," one said. The Beidaihe meeting "has gone into complete stealth mode."

In recent years, it had become an early August practice for the head of the party's Organization Department, at Xi's behest, to meet with experts from various fields spending their vacation in Beidaihe and commend them for their services.

China watchers around the world wait for this report to appear in state media as the opening bell of the Beidaihe gathering. This year, the bell never sounded.

The list of irregularities does not end there. Candidates in the race to become next-generation Politburo Standing Committee members and possibly succeed Xi in the future were reported to be in conspicuously non-Beidaihe locations at the beginning of August.

One such figure is Hu Chunhua. Ten years younger than Xi, the 57-year-old Politburo member and vice premier has long been said to be a promising next-generation leader.

On Aug. 3, Hu appeared in the Tibet Autonomous Region, in southwestern China, on an inspection tour in his capacity as head of the State Council leading group of poverty alleviation and development.

Bordering India, the region is a hot spot amid deteriorating relations between the two countries. 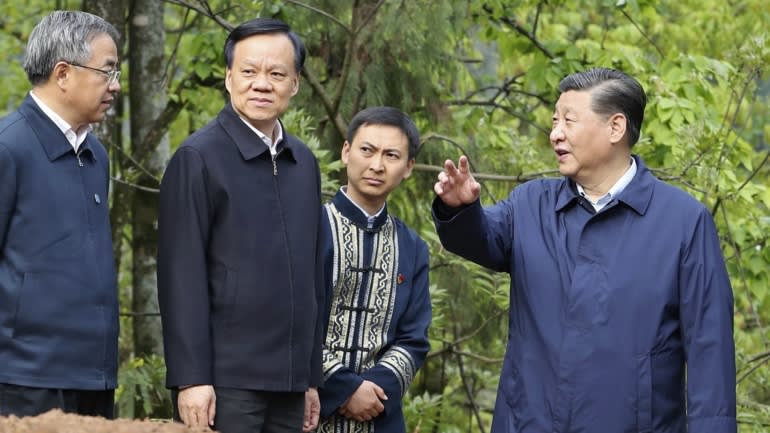 Xi and Hu are not close politically, due to Hu's affiliation with the Communist Youth League, the Chinese Communist Party's youth organization, which Hu once led.

The league is a rival to Xi's power base, and the top leader has harshly criticized it for being "aristocratic" and "too focused on entertainment."

Chen and Li were Xi's subordinates when Xi was serving as Zhejiang Province's top official. They are both promising next-generation leaders belonging to the Zhejiang faction, which forms the core of Xi's political stronghold.

Li inspected the streets of Shanghai on Aug. 7 to see how people were eating their outdoor breakfasts -- deep-fried dough and soy milk -- in the time of COVID-19.

What was notable was that there were no media reports that Li met with Terry Branstad, the U.S. ambassador to China, who was visiting Shanghai around that time.

It was the newly appointed mayor of Shanghai, the No. 2 official in the municipality, who met and held talks with Branstad, who is said to have U.S. President Donald Trump's ear. 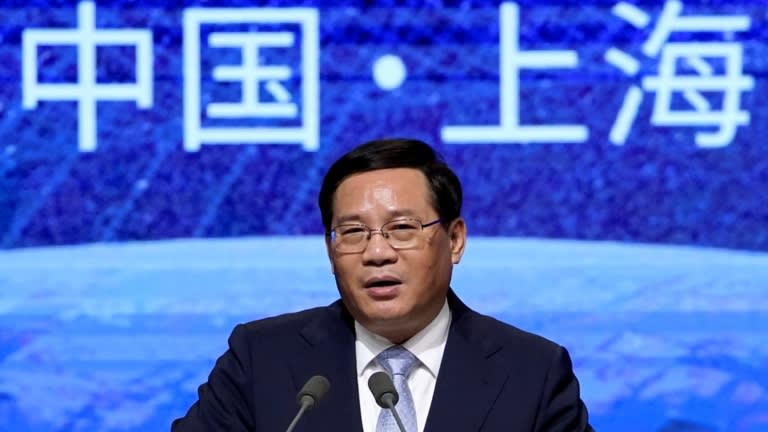 Shanghai Party Secretary Li Qiang, a protege of Xi's, speaks at the opening ceremony of the World Artificial Intelligence Conference in Shanghai, China, on July 9, 2020.    © Reuters

Some saw this as a reflection of deteriorating bilateral relations. With tensions high, China was not about to engage with the "enemy" and share information about the stealth Beidaihe meetings, the analysis goes.

A former longtime governor of Iowa, the breadbasket state, Branstad is paying close attention to China's food purchases, an issue related to Trump's prospects in the upcoming presidential election.

Chen, who also serves as a Politburo member, inspected places within Chongqing considerably away from the central part of the municipality on Aug. 10, 11 and 14, according to local media reports.

Hu, Chen and Li, the three future stars, were all going about their business in the first half of August at a time when the Beidaihe meeting was said to be underway.

There is no evidence that they stayed at Beidaihe during the period.

Meanwhile, there were news reports that Li Zhanshu, the 69-year-old head of the National People's Congress, China's parliament, and who has a seat on the seven-member Politburo Standing Committee, attended a parliamentary committee in Beijing on Aug. 8-11. Xi waves from the podium at the Great Hall of the People in Beijing on Oct. 25, 2017. Also photographed are Li Zhanshu, left, Wang Huning and Premier Li Keqiang.   © Kyodo

According to media reports, Premier Li, 65, on Monday spoke about economic policies at the executive meeting of the State Council, the Chinese government, while Wang, 64, attended a meeting of the All-China Youth Federation, which has close links to the Communist Youth League.

Xi did not attend the All-China Youth Federation meeting but had a congratulatory message read there.

Xi himself made a public appearance after a long interval on Tuesday afternoon, when he made an inspection tour of flood-hit Anhui Province.

One could say that this is not the time for all of China's leaders to leave their positions en masse and huddle in Beidaihe -- not as relations with the U.S. are at a historic low, with supply chains having been disrupted and with the Hong Kong national security law burning bridges with much of the West, not to mention potential crises percolating along the Taiwan Strait and in the South China Sea.

And if the party were to stick to its tradition of projecting unity, at least to the outside world, retired former presidents such as Jiang Zemin and Hu Jintao would have to support and encourage Xi for now, despite the list of complaints they might have amassed.

Regardless, Xi has been busy laying the groundwork for the path ahead.

At the end of July, the Politburo decided to convene the fifth plenary session of the party's 19th Central Committee in October. The Politburo also decided to put on the agenda a forward-looking plan that extends to 2035.

The unexpected decision to discuss the 2035 plan is seen as part of preparations for Xi to reign for the ultra-long term.

But due to China's aforementioned challenges, Xi is unable to proceed in his favored top-down management style.

Surrounding himself with trusted aides and purging rivals through his much-vaunted "anti-corruption" campaign, Xi has had a free hand to rule as he wishes.

As might be expected, this method has not applied this summer. Xi's long-term ambitions create friction between Xi himself and other political forces; they also explain why party elders distance themselves from the current leader.

As a result, Beidaihe became a "stealthy" meeting. Under the pretext of the coronavirus emergency, the annual norms were tossed out. Nothing was visible. It could be that the meeting was held in Beijing.

The reason for the long absence of the top leaders in August was likely because there are so many important topics to discuss.