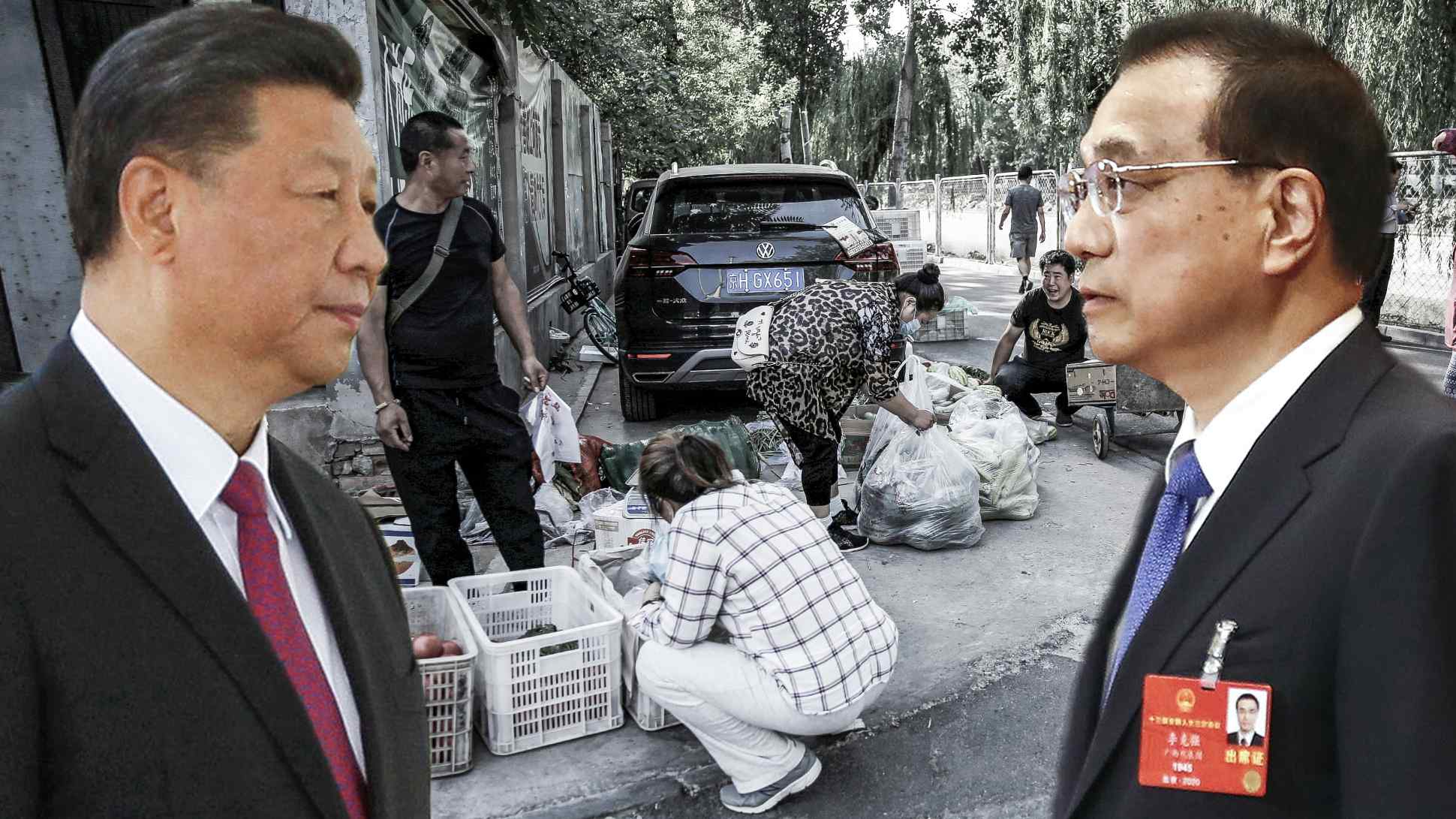 Chinese President Xi Jinping, left, and Premier Li Keqiang have been rivals since they both were candidates for the top job years ago.(Nikkei Montage/Reuters/Kyodo)
China up close

TOKYO -- Two of China's richest men sold items on the street earlier in their careers.

In the 1980s and 1990s, street stalls were the first signs that a market economy was emerging in a country where inefficient publicly owned companies had long held sway.

Today, street stalls are back in the spotlight, this time as the topic of a heated debate among the Chinese leadership.

On June 1, Premier Li Keqiang headed to Yantai, a port city in Shandong Province, where he inspected some street stalls. He praised the stall owners, declaring the "street-stall economy" to be an "important source of jobs" and "part of China's vitality."

Several days earlier, Li stressed the job creation capacity of street stalls during a news conference at the close of the National People's Congress, China's parliament. The term "street-stall economy" has become a buzz phrase. Chinese Premier Li Keqiang went to Yantai, Shandong Province, on June 1 to talk to vendors, telling them the "street-stall economy" is "part of China's vitality."   © Kyodo

The interest comes as China faces exceptionally high unemployment, with many struggling to find jobs. The coronavirus pandemic has dampened economic sentiment and discouraged companies from hiring.

One private estimate says the country's jobless rate could be 20% if migrant workers who lost jobs in urban areas and returned to their hometowns are included.

How can China weather the current economic storm? Who will be the savior that presents specific measures to lead the country out of the crisis? Ordinary Chinese are now debating these questions.

The hottest topic among them? The treatment of street stalls selling cheap food, clothing and sundries.

Over the past several years, President Xi Jinping's regime has cracked down on stalls as part of efforts to maintain security and strengthen governance. Li's public endorsement of the street vendors is seen as a policy reversal.

Unlike the dubious sellers of fake products in the past, today's street vendors are tech-savvy.

Many display QR codes that shoppers can scan with their smartphones to complete their purchases. If problems arise, everything is traceable.

"If everyone works hard, businesses will survive and grow stronger, and the country will create more space for their development," Li told a grocery stand owner in an old residential community in Yantai, Xinhua News Agency reported on June 2.

Days later, China's latest buzz phrase was hit with an unexpected headwind. The Beijing Daily, the official newspaper of the Chinese Communist Party's Beijing Municipal Committee, on Saturday published a commentary saying that street stalls are "unhygienic and uncivilized," and not suitable for the capital.

The critical article warned against being influenced "blindly by winds and trends." It was squarely rejecting Premier Li's proposals.

The following day, state-run China Central Television followed up with a commentary to the same effect. A street vendor in Beijing sits behind her improvised stall after officials ordered her to leave on June 8.   © Reuters

The conflicting messages have left cities in confusion. In Dalian, a port city in Liaoning Province that sits on the opposite side of the Bohai Strait from Yantai, a ban on night market stalls was lifted in some neighborhoods a day after Li praised the "street-stall economy."

The netizens of China, naturally, pounced.

"Something unusual must have happened," one said. "It's disappointing because anybody who knows what is going on on the ground has been all for [Premier Li's policy]."

Said another, "The [party] propaganda division seems to have issued an order not to use the term 'street-stall economy.'"

A closer look at the chain of events shows an interesting fact. Close aides of Xi hold key positions in the two organizations that openly criticized Li, namely the Beijing municipal government and the Publicity Department of the party's Central Committee, which oversees media outlets.

The top official in Beijing is Cai Qi, the party secretary and one of 25 Politburo members.

Cai belongs to two of Xi's power bases, both the "Fujian faction" and the "Zhejiang faction," because he was born in Fujian Province and worked in Zhejiang Province with Xi. The president has promoted officials who once served under him in these two provinces.

As Beijing secretary, Cai has been actively "cleaning up" the capital, removing shoddy buildings that were inhabited by migrant workers from rural areas.

In the name of security and air-pollution prevention, he has clamped down on street stalls. Even mom-and-pop shops on the first floors of housing complexes have been subject to removal.

As a result, much of the low-income "outsider population" that supports the street-level economy was forced out of Beijing. 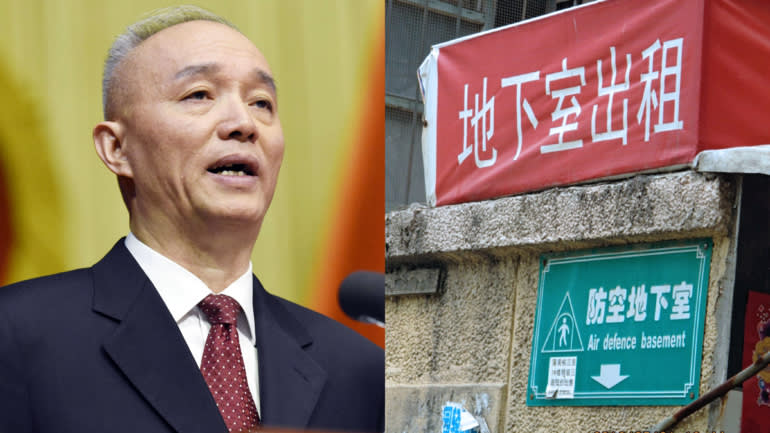 Meanwhile, the party's Publicity Department is headed by Huang Kunming.

Huang, also a native of Fujian, worked in Zhejiang during Xi's time there. He is considered a leading member of the Zhejiang faction, which forms the core of Xi's political group.

Troubling for Xi is that Premier Li is pretty popular among the common folk, more so than originally thought.

"Ordinary people particularly feel that the premier is thinking more about their livelihoods than the general secretary," one intellectual living in a local city said, referring to Li and Xi.

The return of the street-stall economy is not pleasant for Xi because it conjures memories of the early stages of China's "reform and opening-up," when the stalls helped reduce unemployment.

It is nostalgia for the whiff of freedom people felt with "reform and opening-up," that existed from the years of former leader Deng Xiaoping to the previous President Hu Jintao, leaders whose standing Xi has tried to undermine.

Not all of China's 1.4 billion people work for blue-ribbon corporations. Most are self-employed or work at micro, small and medium-sized companies. Furthermore, half of China's population lives in rural areas.

At his news conference on May 28, Li touched on the reality of the social structure.

"There are still some 600 million people earning a medium or low income, or even less, he said. "Their monthly income is barely 1,000 yuan (about $142), not even enough to rent a room in a medium-tier Chinese city."

The 600 million people Li cited account for a little over 40% of China's population. The premier's remarks, expressing affection for the working class in the wake of the coronavirus, have received favorable responses from many ordinary folks. "That's what I wanted to hear him say," one said. Chinese President Xi Jinping and Premier Li Keqiang at the Great Hall of the People in Beijing on May 27. Li has been gaining popularity by standing up for small vendors.   © Reuters

In the political arena, however, Li's focus on the plight of the poor goes against Xi, who is hunting for economic achievements to tout before the 100th anniversary of the establishment of the Chinese Communist Party, which comes next year.

The National Bureau of Statistics quickly issued a rebuttal to Li's candid remarks on its website.

According to the explanation, the elderly with no income and children are among the "600 million people" cited by Li. This pulls down the segment's average wage. Many people in China earn much more than 1,000 yuan a month, it says.

Considering that the bureau of statistics lies under Li's direct control, the announcement was bizarre.

The more popular Li and his policies become, the more political danger they pose to Xi, as the wave could lead to a backlash against the president's iron-fisted rule.

This is why Xi's camp has been quick to counterattack Li's populism.

Tensions have been rising between Xi and Li because China is about to enter perhaps its most crucial political season in a decade.

This summer, the basic direction of personnel changes at the party's national congress in 2022 will be determined. Not next summer, a year before the 2022 congress, but now.

This summer's annual Beidaihe meeting, a secretive conclave where the party's current leaders and its elders get together at the seaside resort of Beidaihe, Hebei Province, will be highly important.

The elephant in the room will be Li's age. When the national congress rolls around, he will be 67, one year younger than the party's unofficial retirement age of 68.

Xi will be past the threshold but Li will not, and he will have the right to remain as a member of the Politburo Standing Committee, the party's top decision-making body.

But as things stand now, many pundits think Li will retire from front-line politics and that Xi will remain as a member of the committee thanks to a constitutional revision he pushed through in 2018 scrapping presidential term limits.

A scene from "Along the River During the Qingming Festival." Considered to be China's "Mona Lisa," the work depicts daily life on a canvas 25.5 cm high by 5.25 meters wide.   © Kyodo

The debate over the "street stall economy" serves as a litmus test for whether people support the premier.

It is likely not easy being in a member of the Chinese Communist Party. Members are constantly under pressure to show the flag, even over economic policies. Straddling the fence is unacceptable. And cutthroat intraparty struggles have been a constant feature.

Street stalls have a long history in China. A famous painting from the Northern Song dynasty, "Along the River During the Qingming Festival," depicts ordinary people gathering at various stalls in the capital of Kaifeng.

The national treasure is enshrined in the Palace Museum in Beijing's Forbidden City.

Next door, in the Zhongnanhai -- which holds the headquarters of the party, which Xi leads, and of the State Council, which Li heads -- the final Xi-Li battle is brewing.