'China spy' and a last-ditch attempt to swing Taiwan's election

TAIPEI -- Behind the scenes of Taiwan's presidential electioneering, an international plot is said to have been brewing.

It was to serve as a last-minute bombshell that could have turned the tables and offer pro-Beijing candidate Han Kuo-yu of the main opposition Chinese Nationalist Party a chance to stage a come-from-behind victory.

The bombshell was timed to go off on Jan. 9, two days before the election, when Han was scheduled to hold a rally in front of the presidential office building in Taipei that would gather 1 million fervent supporters of the Nationalist Party, also known as the Kuomintang (KMT).

According to Australian media accounts, the plan was to have Wang "William" Liqiang -- a self-proclaimed former Chinese spy who fled to Australia and said China was interfering in Taiwanese elections -- recant his assertions.

"I am a fraudster," Wang was to say, "who told a sheer lie and fabricated the incident after receiving money from Tsai Ing-wen's Democratic Progressive Party."

It was a daring "mission impossible" designed to make Wang switch sides again.

By releasing the "confession" immediately before Han's massive rally on Jan. 9, the plot was supposed to create a cloud of suspicion over President Tsai Ing-wen and her independence-leaning Democratic Progressive Party.

In that scenario, someone with knowledge of the whole scheme was supposed to appear on stage at the rally.

In return, Wang was to receive a guarantee that he would be able to freely return to China, the right to permanently settle in Taiwan, money and the protection of his family. The Han camp is reportedly suspected of threatening to retaliate if Wang refused. 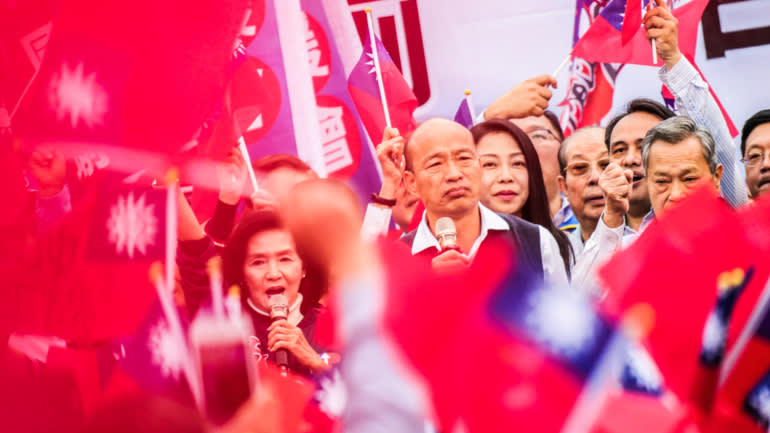 Chinese authorities in November labeled Wang a "convicted fraudster who uses a fake passport." For Wang to return to his native country, he would need to recant.

Accused of being central to this international plot was Alex Tsai, the KMT's incumbent deputy secretary-general who is said to have talked with Wang on a video call. A Chinese businessman close to Alex Tsai is also said to have been involved in the video call.

But the conspiracy eventually ended in failure, as multiple Australian media outlets began to report that Wang was being intimidated by the KMT and China.

At a news conference on Jan. 9, the KMT's leadership, including Alex Tsai, was forced to explain.

The leaders published footage of the video call and denied intimidating Wang. They gave a lame explanation, saying their push for Wang to admit failure was like correcting a younger brother's wayward course.

Australian investigative authorities confirmed that they have launched a probe into the matter. They have reached out to Taiwanese authorities to inquire about similar cases in the past.

Alex Tsai is facing criticism even from within the KMT for the problematic act. On election day, President Tsai won a sweeping victory. How was the plot against her hatched?

At the beginning of 2018, Chinese President Xi Jinping called for the unification of Taiwan under a "one country, two systems" formula. President Tsai immediately rejected the call, which resulted in her administration's slumping approval rating bottoming out and heading back up.

Furthermore, since massive anti-government demonstrations erupted last summer in Hong Kong, which operates under a one country, two systems formula, anti-China sentiment has risen in Taiwan, leading to a sharp increase in public support for the DPP.

It had been clear since summer that the KMT was lagging in the presidential race. The opposition party needed a surprise move to tip the balance in its favor, and fast. It was desperate.

China was also struggling amid what it saw as an unfavorable political situation in Taiwan.

"Beijing has had no choice but to accept Han Kuo-yu's inferiority since last autumn," said a source who is involved in China-Taiwan relations and knows the political atmosphere in Beijing.

But China avoided direct intervention in Taiwan's presidential election, knowing that any publicly visible move would have the unintended effect of working against Han.

Unlike in Taiwan's previous presidential election, in 2016, Chinese scholars on Taiwan issues also refrained from commenting on the latest election. 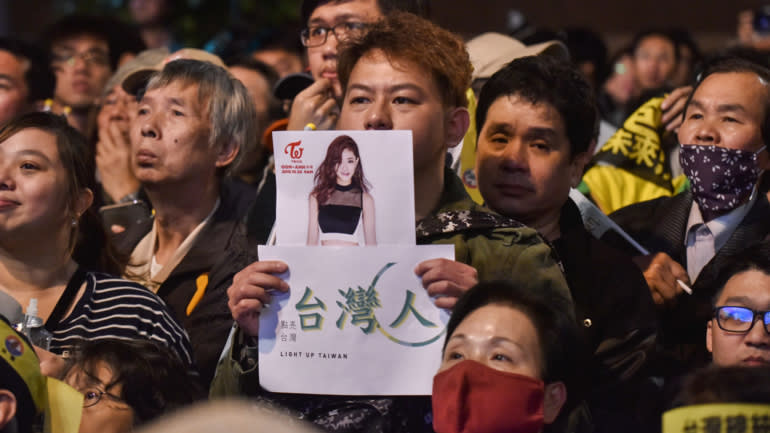 A supporter of Taiwan’s Democratic Progressive Party holds up a placard of K-pop artist Chou Tzu-yu, a member of the South Korean all-girl band Twice, who was forced to apologize after waving the Taiwanese flag.   © AFP/ Jiji

China had learned lessons from an incident involving a member of Twice, a K-pop idol group. The member, Chou Tzu-yu, was born in Taiwan's Tainan and is one of the island's most popular celebrities. She topped the list of the "100 Most Beautiful Faces of 2019," which was announced by a U.S. movie review website, for the first time.

Before Taiwan's 2016 presidential election, she waved the flag of the Republic of China, Taiwan's official name, during a South Korean television program, sparking criticism of her in China as being "pro-independence."

Chinese TV channels refused to broadcast footage of Chou on their programs and she was forced to publicly apologize in a video.

"There is only one China, the two sides of the strait [China and Taiwan] are one, and I have always felt proud to be Chinese," Chou said in the video. "I feel extremely apologetic to my company and to Internet friends on both sides of the strait for the hurt that I have caused, and I also feel very guilty."

Chou, 16 at the time and working in South Korea, was caught up in complicated international politics.

But her forced performance backfired on China. Taiwanese showered her with sympathy, and their anti-China sentiment swelled. The flag incident affected how Taiwan's eligible voters cast their ballots in those 2016 elections, contributing to Tsai's first big win.

Chou turned 20 last year and gained the right to vote in Taiwan.

Ahead of Taiwan's recent elections, the unending and massive demonstrations in Hong Kong inflamed anti-China sentiment on the other side of the strait more than the flag incident, helping Tsai and her DPP secure more votes than they otherwise would have obtained.

That was due to another major miscalculation by China's leadership.

When the Tsai camp held a campaign rally held in front of Taipei's presidential office building on the eve of the election, activists who had traveled over from Hong Kong joined the masses waving flags with popular slogans from the Hong Kong protests, such as "Liberate Hong Kong, revolution of our times." They shouted: "Thank you, Taiwan!" A banner supporting the Hong Kong protests is seen at a rally. (Photo by Akira Kodaka)

One influential Taiwanese business figure who has supported the KMT for many years painted a dismal picture of the party.

"The KMT will be crushed if it gets too close to the Chinese Communist Party," the business figure said.

"If it becomes clear that it can't win in the presidential election in four years' time, it could very well collapse," the business figure added. "In Taiwan's political scene, the 'pro-China market' has already disappeared."

The century-old Beijing-friendly party ruled the Chinese mainland before losing to the Communists in a civil war and moving its political base to Taiwan in 1949. Its resounding defeat has triggered intraparty fighting, and party Chairman Wu Den-yih stepped down on Wednesday.

A media outlet close to the party published an article headlined, "Biggest war criminal responsible for KMT's disastrous defeat is Wu Den-yih." The party's traditional supporters have recently frowned on the KMT moving closer to China.

Holding the key to the party's fortunes is Han Kuo-yu, who lost the presidential election but is still the sitting mayor of the southern city of Kaohsiung.

In his concession speech, Han reversed the aggressive attitude he displayed while campaigning for the presidency and made no excuse for the outcome. He left a fresh impression. Will he be able to fend off calls from citizens of Kaohsiung, his stronghold, for him to be dismissed as mayor?

Over the next several months, Han will be forced to fight to remain as mayor.

Chinese President Xi's struggles over Hong Kong and Taiwan will have a significant impact on a power struggle within the Chinese Communist Party.

Xi will face a big moment next year -- the party's 100th anniversary.

And if he chooses to stay on as China's top leader at the party's next national congress in 2022, he will continue to be tasked with realizing China's long-held dream of unification with Taiwan.

If the island's public opinion continues to move away from the mainland, expect to hear more statements from Xi about a unification by force. An awkward handshake between Chinese Vice Premier Liu He, left, and U.S. President Donald Trump at the signing ceremony for "phase one" of the U.S.-China trade agreement at the White House on Jan. 15.   © Reuters

A commentary piece that China's state-run Xinhua News Agency ran after the Taiwan election, blamed intervention from "external dark forces" as a reason for Tsai's big win. There is little question that the phrase is an euphemism for the U.S.

One aspect that Beijing is likely looking at, and is worried about, is that more Taiwanese voters feel safe moving away from the mainland. With the U.S. and China battling for hegemony in the region, they have a hunch that Taiwan's economic dependence on China will not rise any further.

Powerful Taiwanese companies such as Taiwan Semiconductor Manufacturing Co., or TSMC, hold core technologies for next-generation 5G mobile networks, which means they hold the key to the fate of Chinese telecoms giant Huawei.

If the U.S. administration of President Donald Trump seeks a "decoupling" of the American and Chinese economies in the high-tech sector, Taiwan will be highly sought after by both the U.S. and China, as a vital ally to have.

There are many variables. The U.S. Treasury Department dropped its designation of China as "a currency manipulator" for the first time in eight months in a report released on Monday.

The U.S. move came ahead of Chinese Vice Premier Liu He's signing in Washington of a "phase one" trade deal that contains measures to make China's yuan policy transparent.

A possible "phase two" trade deal between the U.S. and China and the future of the two countries' battle for high-tech supremacy will also significantly affect Taiwanese President Tsai's second term.