The people of Taiwan have become obsessed with a scandal that involves a self-proclaimed Chinese spy, their country's elections and booksellers in Hong Kong. (Nikkei montage/ Source photos by Getty Images and Reuters)
China up close

Investigation has potential to sway elections and regional power game

TAIPEI -- On Sunday morning, as voting began in Hong Kong's district council elections, where pro-democracy forces were about to score a historic victory, Taiwan was buzzing with a new scandal.

At a convenience store in Taipei, a shop attendant continued to point to a corner of the shop, directing customers to the place that all of them were looking for. The shelf with the day's newspaper piled up.

A story about a 26-year-old Chinese man claiming to have been involved in Beijing's spying activities was causing a frenzy.

The man, who appeared on Australian media over the weekend, has provided Australian intelligence with unprecedented details of China's alleged political interference in the outside world and is seeking asylum.

Included in the allegations was a confession that he, the self-proclaimed spy Wang "William" Liqiang, had been part of operations to interfere in Taiwan's local elections last autumn. That was the election in which President Tsai Ing-wen's pro-independence Democratic Progressive Party, or DPP, suffered a devastating defeat.

The bombshell exposure came just a month and a half before the Jan. 11 Taiwanese presidential vote, in which Tsai faces off with Han Kuo-yu of the main opposition party Kuomintang or KMT.

Han's KMT, which pushes for closer ties with mainland China, won a landslide in those elections last year, but has since seen the euphoria slip away, with some opinion polls showing Tsai taking a significant lead over Han in the presidential run.

Taiwan newspapers were sharply split across party lines over the "Chinese spy" coverage.

"China conspires to interfere in Taiwan elections," declared the front page of a newspaper close to the DPP.

"The 'spy' was a convicted fraudster. Election interference is a lie," wrote another paper close to Han.

Either way, the politics-loving people of Taiwan cannot stop talking about the incident and the upcoming presidential elections, over family dinner tables and at restaurants with friends. It is also a regular topic of conversation between taxi drivers and passengers.

Han, the presidential candidate, was suddenly embroiled in "China-spygate." He immediately responded by saying he would drop out of the election if there is proof he has taken any money from the Chinese Communist Party. 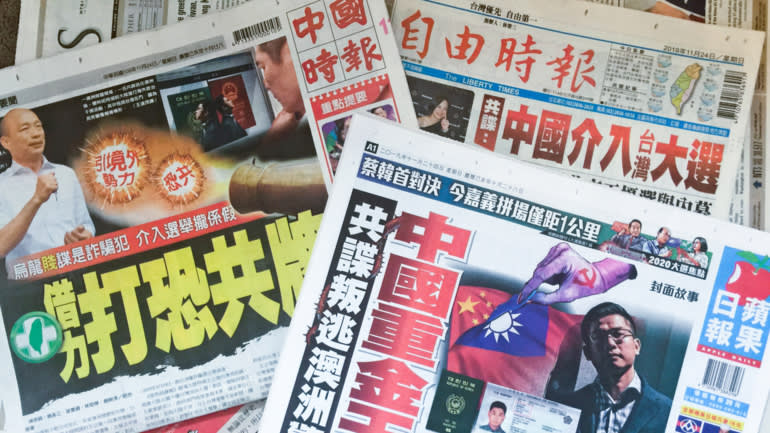 Taiwan newspapers were divided across party lines over coverage of the so-called China-spygate.

The Chinese side was also already moving.

The Communist Party's Central Political and Legal Affairs Commission, which oversees China's judiciary and police, released a "situation report" by Shanghai's public security bureau on its official WeChat account. The report said that Wang, the asylum-seeker, "is a convicted fraudster who uses a fake passport."

On Monday, when it was becoming clearer that pro-democracy forces had won a resounding victory in Hong Kong, winning 85% of the 452 district council seats, China-spygate saw another significant development in Taiwan.

A man and his wife were detained at Taiwan Taoyuan International Airport as they tried to leave the island. The man was in charge of a company named by Wang as the base of espionage operations in Hong Kong and Taiwan. The couple were taken back to Taipei for questioning by the Investigation Bureau of the Ministry of Justice.

It was the first known step Taiwanese authorities took to investigate the spy case. China Innovation Investment, the Hong Kong-listed company named by Wang, also acknowledged that its CEO Xiang Xin and his wife Kung Ching, an alternate director at the company, are cooperating with the probe. The Taiwanese authorities have already banned the couple from leaving the island.

Wang's testimony does not end there. He claims that he was also involved in the apprehension of Hong Kong booksellers in 2015.

The incident at Causeway Bay Books, a Hong Kong bookstore known for publishing and selling works critical of the Chinese government, in which booksellers were taken one by one to the mainland, sparked harsh criticism that it shook the foundations of Hong Kong's "one country, two systems" formula guaranteeing the city's high degree of autonomy.

In the larger picture, it was the nucleus that eventually led to the widespread protest movement that erupted in Hong Kong this year. Fearing a repeat of the bookseller abduction, Hongkongers revolted against a bill that would to allow Hong Kong authorities to hand over criminal suspects to mainland China. If the bill passed, the secretive kidnapping at Causeway Bay Books could be carried out in broad daylight, the protesters said.

It led to massive street demonstrations attended by anywhere between one million and two million ordinary citizens this summer. The Hong Kong government formally withdrew the bill in October. In Sunday's local elections, which were seen as a de facto referendum on the protest movement, pro-democracy forces scored a historic win.

Lin Rongji, one of the Causeway Bay Books abductees, has already left Hong Kong, where China's influence is growing, and migrated to Taiwan. He is now preparing to open the bookstore again here. Over the past four to five years, Hong Kong and Taiwan have been deeply intertwined, both in terms of politics and social development.

China-spygate has the potential to deal a serious blow to either the DPP or the KMT, if the whole truth comes out. With so much at stake, an information war is developing between China and Taiwan, trying to control the narrative.

Furthermore, the incident happened in Australia, a hot spot in the battle for regional influence between China and the U.S.

By flexing its economic muscle, China is going on the offensive in Australia. The U.S. is playing catch-up under the banner of security and freedom of speech.

The tug-of-war has similarities to the house arrest of Meng Wanzhou, the eldest daughter of Huawei Technologies' founder Ren Zhengfei and the company's chief financial officer, who was detained and kept in Canada at the request of the U.S.

Neither Taiwan's population of 23 million, or Australia's 25 million, or Canada's 37 million, or Hong Kong's 7.4 million, are any match for China's 1.4 billion people. But that does not mean that they are easy to deal with for China. The opposite is actually true.

Precisely because they are small, they try to protect themselves by flocking to powers that can confront the giant dragon. That is called survival instincts.

China-spygate continues. And China watchers around the world will be glued to the developments.